You’ve probably heard of the ELEMNT already, Wahoo’s attempt at breaking Garmin’s near monopoly on bike GPS computers. I’m not going to delve into every feature that it has to offer, but I’ll fill you in with my ownership experience so far.

Over the years I’ve owned a number of Garmins, first the Edge 200, Dakota 20, Edge 500 and most recently the Edge 810. I progressed through the various models as my requirements for more sensors, mapping or convenience changed. It irked somewhat that despite being made by the same manufacturer, they all employed different user interfaces. Still, I could forgive that as long as they reliably tracked my data, or showed me the way to go in all sorts of nasty conditions while strapped to the bars. After all, isn’t this their raison d’être?

All was well until I returned from the Tour Divide and applied a series of updates. The only reliable feature was that now it would crash whenever I rode further than my commute!

Is that a flaky GPS or am I pleased to  meet you?

At the first Audax I entered, I discovered a fellow rider who had suffered in a similar fashion with his old Garmin. He’d recently bought a Wahoo and had been delighted with it. Perhaps sensing the end was nigh, my Garmin behaved on this ride but I did pick up a wingman on the way as his Garmin had failed and he needed someone to follow!

So what do you need to know? Well, setup is a world away from the 810. You simply switch on your ELEMNT, open the companion app on your smartphone and scan the QR code on the ELEMNT screen. With the devices paired, simply select the pages/screens you want. On each one, check a box against the data fields you want displayed and bingo!

Helpfully Wahoo include Open Street Maps for the entire world with the Element (excluding  Russia and China). They have omitted to leave more storage space for ride data but can be downloaded (free of charge) should you need them.

To add a route you can sync one previously created on Komoot or Ride with GPS  or you can use the companion app on your smartphone. The latter  is a quick and painless process. If you created the routes yourself, using Komoot, RWGPS, or the app, then you automatically get “turn by” route cues  at appropriate moments while navigating.

My only misgivings using the app to generate routes in the UK feeds back to our vague rights of way. Wahoo can select trails that while perfectly legal, may be ill suited to your bike. Finding a chewed up bridleway mid way through your road ride isn’t always welcome!

The ELEMNT is not a touch screen device. You cannot pan across the map and are restricted to  zooming in and out. TIf you want to divert from your chosen route (to avoid the bridleway or to go for supplies) navigation becomes tricky with the map detail degrading progressively as you zoom out.

The map detail is perfectly sufficient when following your chosen route. Buildings aren’t shown but roads, bridleways, footpaths, and bodies of water are. The maps themselves are monochrome but in practice this renders them clearer than some maps that can be cluttered with detail.

There are also two sets of LEDS on the device bezel. One is set horizontally along the top, and the other vertically along the left hand side. These can be configured to display a variety of data. Mine are set so the horizontal set flash green/red when joining/leaving a route and flash white towards the direction I need to be turning at the next cue. The vertical LEDS light up in progressively warmer colours to indicate my heart rate zones.

Battery life  is very good as the monochrome display does not chew up the watts. The backlight can be configured to further improve life, via the app. As the ELEMNT pairs with your smartphone for data transfer the micro usb port is solely for charging purposes.  The ELEMNT has no trouble running from a battery pack and doesn’t do the Garmin trick of switching off when being fully charged or if the battery pack runs out!

The mounts included with the Elemnt

The buttons on the ELEMNT are all easy to operate, even when wearing gloves, and the mounting system is just as good as the Garmin quarter-turn its clearly copied, I mean was inspired, by. In the box you get not only an out-front and a stem mount but an aero-bar mount too.

The stem mount attaches with zip-ties which isn’t as handy as rubber o-rings should you need to move it onto another bike. The other mounts affix with regular hex bolts and captive nuts.

One thing we have noticed during our testing is that the screen does scratch easily – though this pretty much applies to any screen used in an outdoor environment. Before you venture outside with your new Wahoo, do yourself a favour and order a screen protector. For just £3.98 including UK delivery, the BROTECT AirGlass from Amazon is great value and will save your device from unwanted scratches.

Reliability wise the Wahoo has yet to let me down. The closest it has come was on London-Edinburgh-London when I forgot to plug in the USB battery pack and it ran flat in the Pennines. With the pack connected it promptly switched back on displayed a “recovering ride” message and within a short time was up and running as if nothing had happened. No data was lost whatsoever.

My only real grumble was after using it on the The Bear Bones 200 . Not all of the trails/fire roads were present on the maps (although all the designated rights of way were) which made some junctions a little more fraught than you’d like! 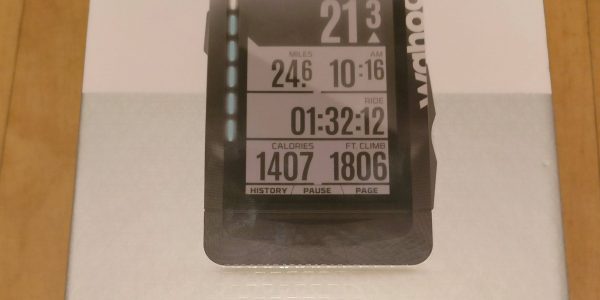 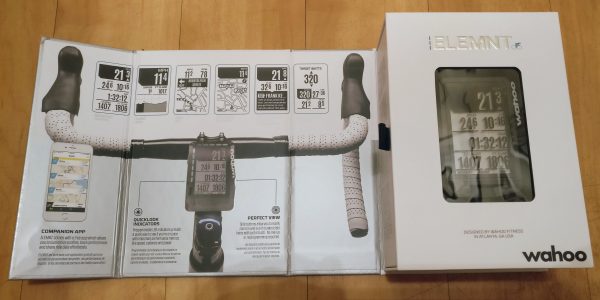 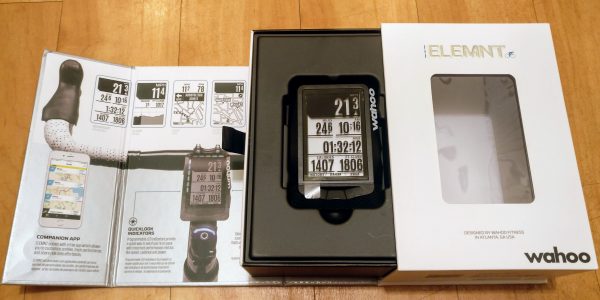 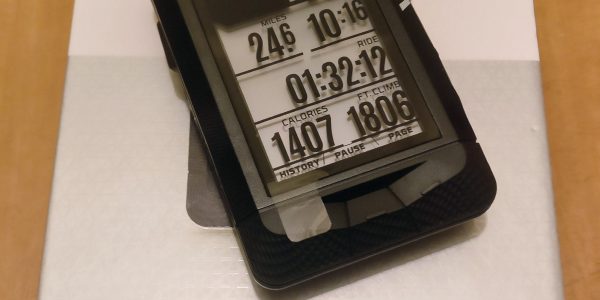 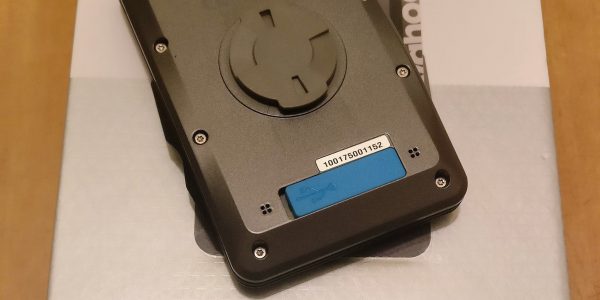 It is a fabulous device, particularly for road use and only with minor caveats for use off-road. The price is comparable to a similarly specified Garmin and considerably less than the latest range topping Edge. If the aforementioned navigation quirks are not a deal-breaker you’ll find the reliability and ease of use more than adequate compensation.

Overall, a fabulous device let down only by certain navigation quirks

Great to read a review that was not sportive / road based and covers BB200 / LEL etc. Have been using a Dakota 20 since 2011 with either full OS for UK and OSM for Tour Divide, Tour Aotearoa, Euro jaunts. I still like the Dakota as I can use AA batteries which are easy to find on big trips or rechargeable from home but worry on longer tours getting a Wahoo / G810 / battery pack charged. And I would miss the scanning around the area which I can do on the Dakota mapping. In summary I still feel… Read more »

I only moved away from my Dakota as for road rides and tracking commutes it’s a bit clunky/faffy to get rides off daily. My Dakota has actually done the TD twice, albeit as a back up that never left it’s bag! My edge was great until a raft of updates for live segments, aria radar and the rest and then it became flaky. I’ve not found the lack of panning about the map to be an issue with the wahoo as no handlebar gps is that good really (Garmin os maps look horrible as well!) and seeing a big HD… Read more »

Open
We don’t really want to talk about autumn alread

We don’t really want to talk about autumn already, but this event always books up quick and is a real belter.
North London Dirt is a wild mashup of urban gravel and byways that meander out of the City and lazily loop back in again, finishing with a locally brewed beer at the end. How refreshing! Limited places, unlimited fun.
Visit @TheRideJournal and follow the link in the bio. ...

Open
Someone mentioned our feed was looking a little to

Someone mentioned our feed was looking a little too dry and dusty with the recent adventures in the Atlas Mountains. So here we are, back in sunny Wales enjoying some liquid sunshine! ...

Open
Dropping out of the Atlas Mountains one final time

Dropping out of the Atlas Mountains one final time before hitting the flat and rolling in to the coastline finish. It’s been tough, it’s been emotional. It’s definitely been an adventure! ...

Big adventures on a little island. @emma_osenton enjoying the sun and exploring the gravel roads of Lanzarote. ...

Open
Decent trails again. And finally some signal!! #at

Open
Atlas Mountain Race and the stoke is high.

Atlas Mountain Race and the stoke is high. ...

Open
230km deep into the #AtlasMountainRace and the Sal

230km deep into the #AtlasMountainRace and the Salsa Cutthroat is a total dream to ride! Some of these trails would be pretty rough going on a gravel bike, whereas the Cutty just soaks it up. .
.
.
#amr2020 #amr2020cap105 #salsacutthroat #salsacycles #adventurebybike #bikepacking #straightcutdesign #morroco #cycling #adventure ...

Open
A hot one in the Atlas Mountains today, which made

A hot one in the Atlas Mountains today, which made it all the easier to stop and admire the views. .
.
#atlasmountainrace #amr2020cap105 #adventurebybike ...

A quick break from Atlas Mountain Race dot watching to zip out on the Mason Bokeh while Storm Dennis is caught napping. ...

Open
Causing mayhem in the Atlas Mountains by taking ph

Causing mayhem in the Atlas Mountains by taking photos of the non-drive side. ...

Open
Packed, fettled, tweaked...ready to go! As for the