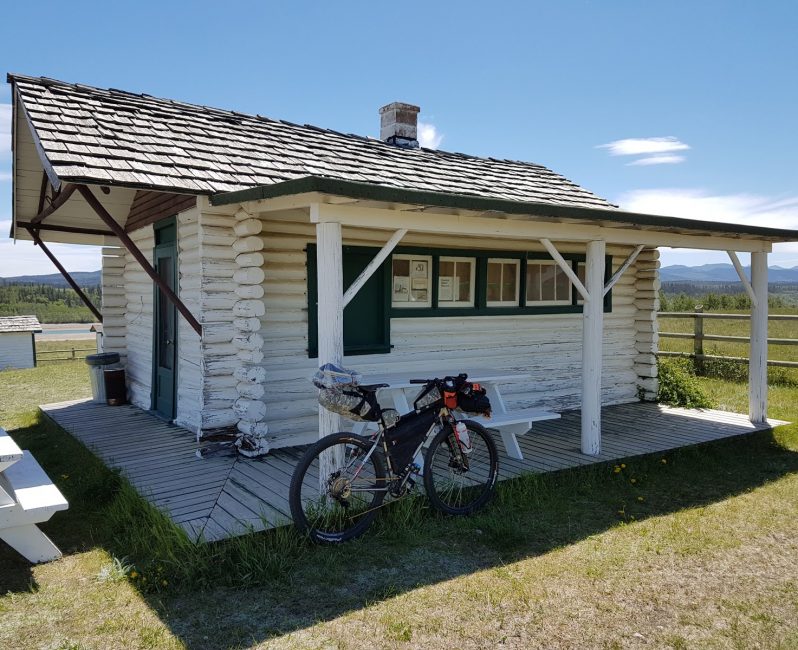 Oh man, the Tour Divide. What a ride, a dream come true, taking part in the legend and all that. I had great plans to write up my experiences and a couple of technical cock-ups put paid to a detailed account. 12 months on I still have my notes here sat gathering dust so I’ll commit them to a blog, they’ll be disjointed but what the heck.

Flew West-Jet into Calgary, the original plane was grounded so I arrived via stand-ins Omni, could have put me onto a Dakota with a folding chair and I’d have been happy. I’m off to Canada baby! 🙂

It was to be the last flight for my trusty Salsa Fargo cardboard box as I dumped it without ceremony in a Calgary Motel dumpster. Popped into MEC to buy bearspray and endured the obligatory training and signed the waiver. Can’t remember if it was to say that I wouldn’t spray humans with it or I wouldn’t sue if I got eaten by a bear.

Bears weigh heavy on my mind as I pop into Tim Horton’s for a coffee and snack…a bear claw.

Ah, a 5.30 am start and time to put the bike together and breakfast at 7am. Iced water in my bottles and off we go up the 1A towards Banff.
Leaving Calgary is a right faff, the bike paths don’t follow the 1A so I say sod it and join the freeway and hug the shoulder. It’s now Smokey Bears I expect to run into as surely I shouldn’t be riding my bike up here….

To relieve the boredom of the freeway I divert into the the Glenbow Lake park and crucnch some gravel to Cochrane via Glen Eagles (Yes, with it’s own golf course). The Garmin craps out in Cochrane after I’ve ridden about 26 miles, Lord no, please don’t let this be the theme for the next three weeks!

Stopped at one of the oldest churches in Canada for a bit of shade and to take a few snaps. Getting a real Little House on the Prairie vibe.

It’s 80 miles from Calgary to Banff and the emptiness of Canada is soon driven home, past Cochrane I find one Gas Station to buy snacks before arriving in Canmore. It’s also a quick lesson in North American cuisine, bigger is better and there’s no such thing as too much of a good thing.

I decided that Canmore would be my base before the TD kick-off, if for no other reason that it was waaaay cheaper than staying in Banff. I find myself a reasonably cheap cabin to lodge in and enjoy the strolls into town playing gopher spotting.

As suggested by Gabes I seek out some Poutine. Chips, gravy, cheese and bacon, what’s not to like?!

Starbucks has become my Canmore eatery of choice. The staff seem baffled by my request for a pain au chocolat and insist it’s a chocolate croissant. Whatev’s, the wifi is much better here than in McDonalds.

I move from downtown Canmore into Harvie Heights, even by cabin standards it’s rustic. Still it’s got a big TV and a variety of terrible TV channels to keep me amused.

As the weather looked good I decided that I ought to hit some gentle trails, enough to be fun but not so much that I break myself or the bike before the Grand Depart.

The ride up to Goat Creek was dusty as hell, I ask a chap for directions and it turns out he’s from Halesworth, crazy huh. We ride into Banff together and I tell him about how Suffolk has evolved since he emigrated.

Mainly mooched about town and enjoyed the river walk in Canmore.

So goodbye Canmore, next stop Banff and TD butterflies!