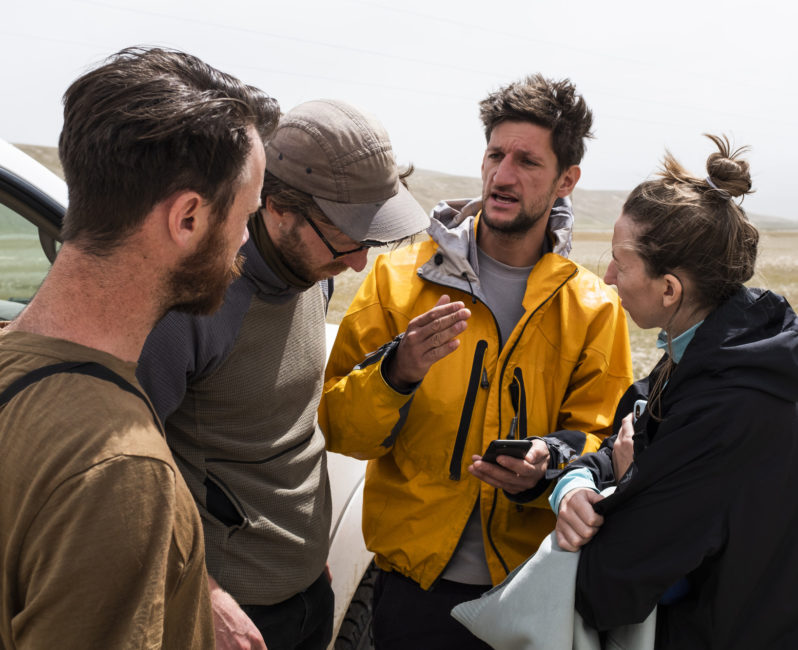 With registration now open for the 2022 Silk Road Mountain Race we thought it would be a good time to talk with race organiser and route creator Nelson Trees, not only to understand how the race came to be but also what its like creating routes that are designed to be as challenging as possible, and what the rewards are for taking part in what some call the hardest cycling race in the world.

So I guess, initially for those who might not be aware of it, what is the Silk Road Mountain Race?

The Silk Road Mountain Race is an unsupported bikepacking race that takes place in Kyrgyzstan during the last two weeks of August. This year it follows a 1900 kilometre course through some of the most beautiful parts of the Tian Shan mountains, taking riders from Osh in the south of the country to Bishkek, the capital, via three checkpoints. As it is unsupported, riders will need to carry all their own equipment, this includes sleeping gear and anything else they might need to complete the course. The race is a single stage, the clock doesn’t stop from when riders start until they reach the finish line. This means that everything is part of the race : eating, sleeping, stopping, etc. We provide information on resupply points and technical difficulties on the course, but beyond that they’re on their own. It’s part bike race, part adventure, with riders facing all kinds of challenges besides the riding itself.

And to ask maybe the next obvious one, why this section of the historical route? Did the race come first or was it inspired by previous travels to the region?

Central Asia is the heart of the historical Silk Road, it’s where East and West meet and has been at the crossroads of civilisations for centuries. It conjures up all kinds of images in people’s imagination. It’s an incredible place. I first came to the region in 2013, when I cycled from Shanghai to Paris and although I only spent a week in Kyrgyzstan, I knew that I wanted to come back here and explore this mountainous wilderness properly. It was only a few years later, when I got into unsupported bikepacking races by competing in the Transcontinental that I started to hatch a plan to return and organise my own event out here. In 2017, I came back, put a route together and launched the race. 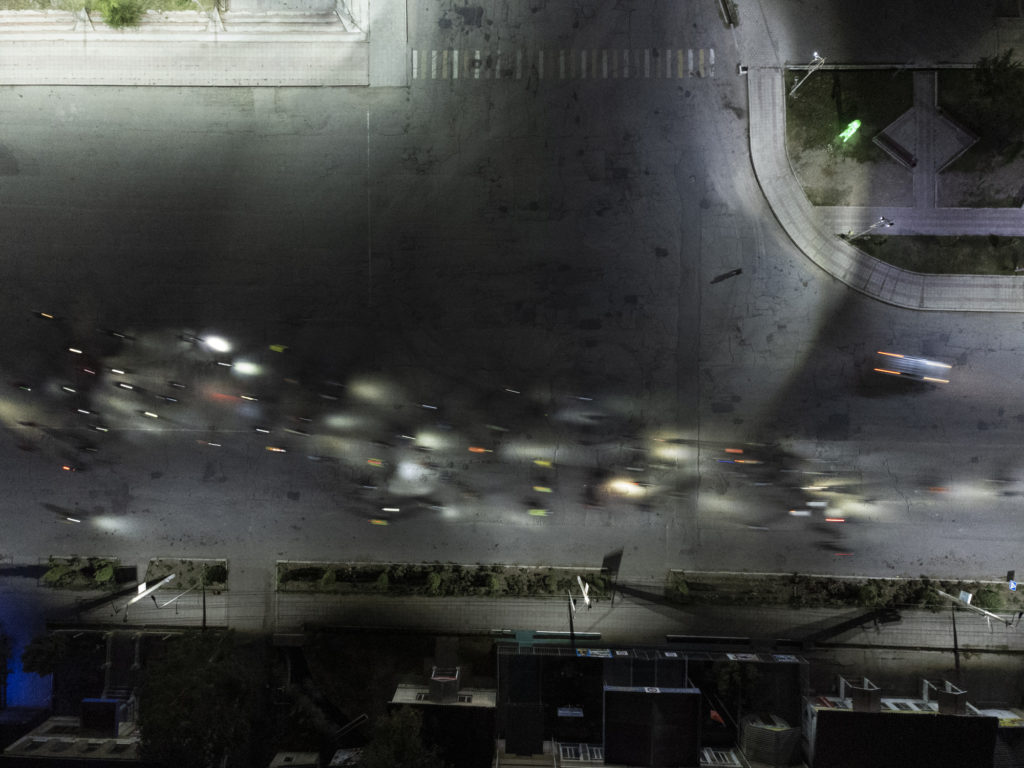 One thing that really sets this apart from a lot of other races, is the continual riding at elevation making for an extra challenge to those taking part, on top of this what are the other factors that really make it one of the hardest cycling races in the world?

Silk Road Mountain Race is not hard because of one single factor, but rather because you face a myriad of difficulties. The riding is not the toughest in the world but it is hard and you need to complete big days on the bike, back to back, for up to two weeks, and all of this at elevation. In addition to this, the route is quite remote with long sections without resupply. The weather is also notoriously fickle, with temperatures from -15 to +40 and anything from searing heat to snow, sometimes on the same day. You need a good mix of skills and the ability to look after yourself in the mountains. 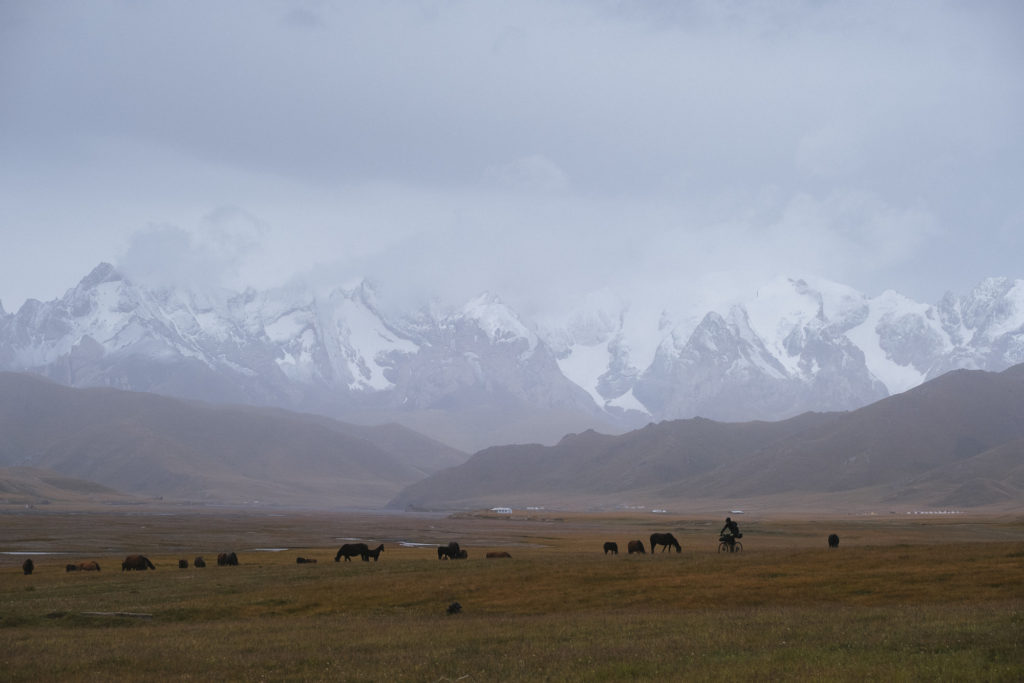 How do you initially set out to create your race routes? Papers maps? Surveys? Or just exploring?

Initially, I spent a lot of time online doing research on all the potential highlights in Kyrgyzstan and looking at what I could potentially include in the route. I also looked at paper maps and trip reports from others who had been here to get a better sense of the country. After that, it was a lot of time spent looking at OSM Outdoors (Open Street Maps) and satellite imagery to see what roads and tracks I could find to link up different locations. Now that I live full time in Kyrgyzstan I know the country a lot better and I have more local resources that I can use. I can talk to locals who live and work out in these remote landscapes and can draw on their experience. There are plenty of tracks and even roads that are not on any maps at all.

Have you noticed a big increase in applications since year one? And if so could you speculate on why?

There hasn’t really been a big increase in applications. It’s generally on an upward curve, but Silk Road Mountain Race is pretty much at the deep end when it comes to this kind of racing. It intimidates a lot of potential riders and tends to be on their list as a bucket list event. Realistically you need to take almost 3 weeks off work to be able to race it properly, allowing some time for acclimatisation before the start. My other event, the Atlas Mountain Race, in Morocco does see a lot of entries though. I think that this is because it’s shorter, more accessible and has less of the factors that make SRMR so difficult. Generally speaking the whole bikepacking scene is seeing a lot of growth. People want more freedom and adventure and this kind of racing fits that very well. 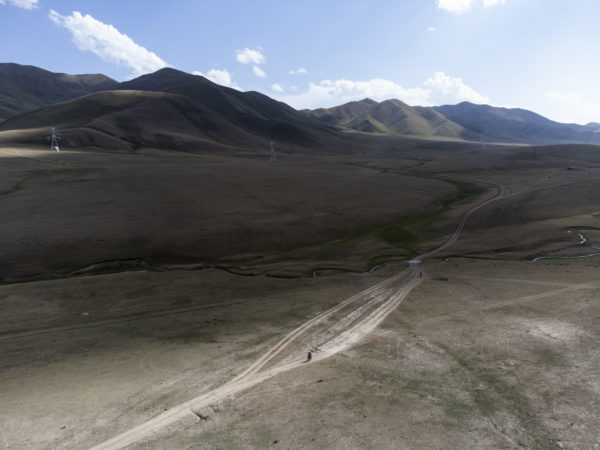 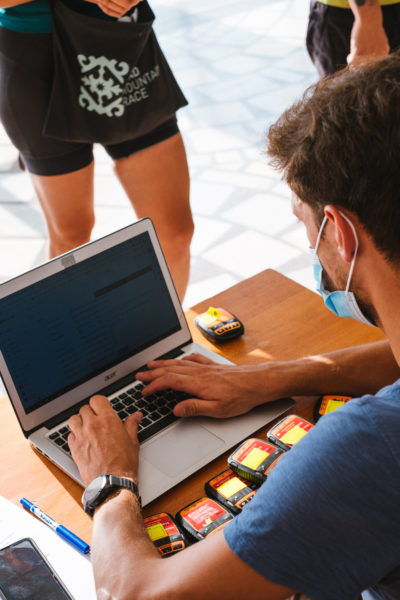 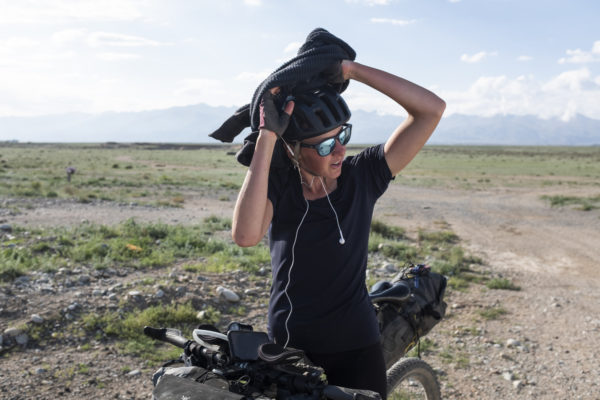 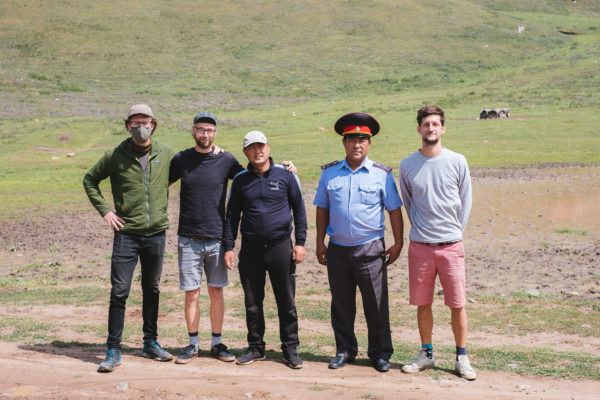 What does it mean to have such an interest in the routes and races your create?

To be honest, I didn’t expect to have this level of success with my races. I just designed a route in a place that I would like to ride, with the kind of riding that I would like to do. It seems that that has resonated with a lot of other riders. The irony of organising them is that I don’t get to race them. I really appreciate the community that has grown around both races and it’s always very satisfying to see what they mean to people and how they can positively impact their lives off the bike.

With three iterations of the race completed have there been any particular moments that really stood out for you?

I’ll always remember the first edition of SRMR. I had never organised anything like this, and to some extent, a lot of what I was doing hadn’t been done anywhere else either. The whole thing was a big step up in terms of difficulty, altitude, remoteness and lack of support because of the country it was being held in. I’ll always remember standing at the top of the first pass of the race about 110km from the start. The pass is called Kegeti and stands 3780m tall. From the top, you get an incredible view down onto the switchbacks below. We were ahead of the field and just as the first riders were arriving, the weather turned and we had a huge electrical storm and it started snowing. I was asking myself what the hell had I just created. After three editions though, I’m much more used to how things go and better equipped to deal with anything unexpected. It also helps that we’ve never had a serious injury in any of my races and have always been able to deal with any emergencies. 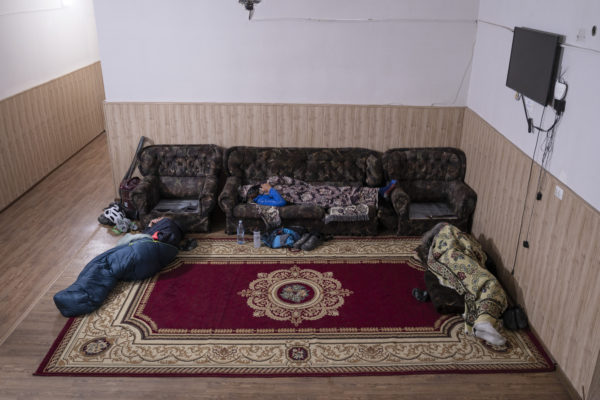 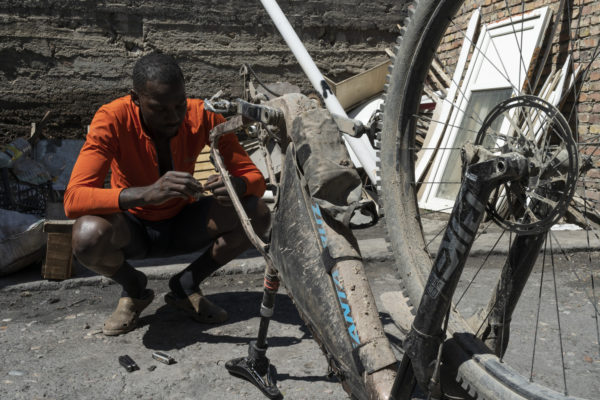 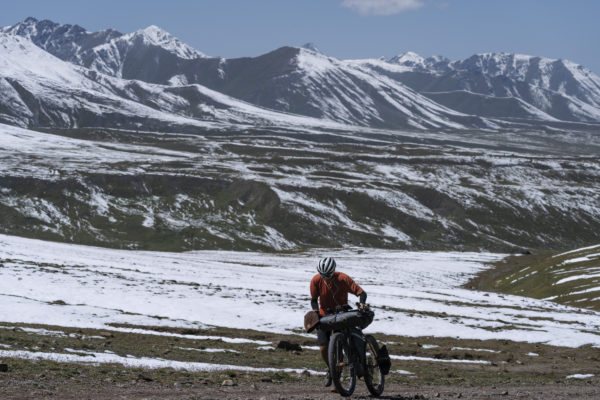 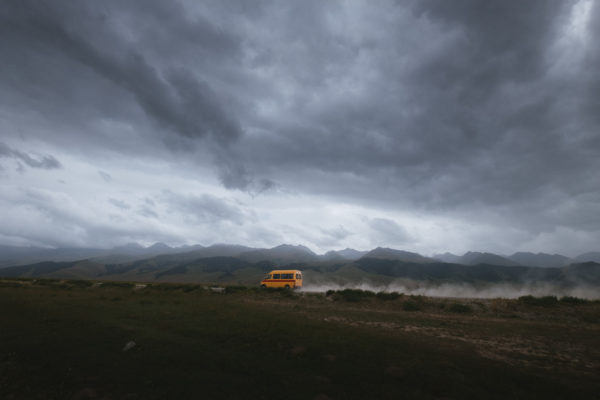 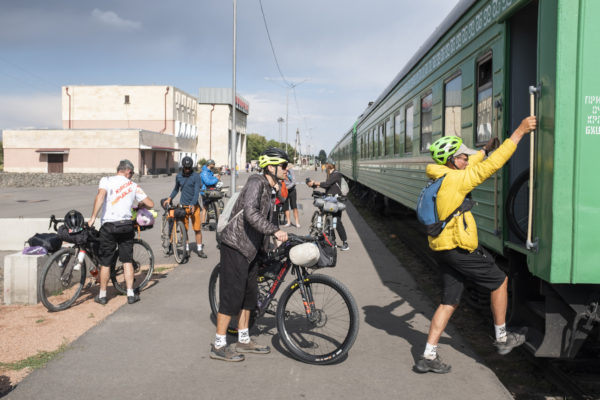 Finally, what advice do you have for anyone looking to take on your races, or just increase the length of the cycles they do currently? What are the rewards that come from it?

If you’ve never done anything quite this big before I would recommend starting with Atlas Mountain Race. The riding is maybe a little tougher but you don’t have the altitude or the weather to deal with so it makes it more accessible. Being shorter, you also don’t need quite the same mental toughness to keep going despite the difficulties for so long. For both races though, it’s not really the cycling fitness that’s the most important. This year, we had a mountaineer who had only been riding 6 months prior to the start and took part on a borrowed mountain bike and still finished SRMR a few days before the deadline. The key is experience being in a big mountain environment and knowing how to stay safe. Bikepacking races are about cycling but the beauty of them is that there are so many other factors, so many other things you can be good at. I’m not the strongest cyclist, but because I know how to push myself, look after the bike and my body and have a stubborn ability to stop very little, I do well. It’s quite a complete sport.

My recommendation is to get out on your bike and explore, do multi-day trips. Sleep in strange places as you do so. Get comfortable being uncomfortable. As for the cycling itself, the training is no different. Intervals are great if you don’t have so much time to train. You only really need to do a few long rides to check your fit, equipment, etc. and to know how it feels. Nothing will quite prepare you for the race itself.

As for the rewards, well, completing something this big and this tough is extremely satisfying. Whenever I announce an event people ask, ‘OK, that looks great but why not take your time, tour the route and really enjoy it?’. For me they’re just totally different. Don’t get me wrong, touring is incredible as well but you will never push yourself the way you would in a race. You’ll rarely get out of your comfort zone, you won’t do the slightly strange and wonderful things you would do in a race. You’d likely not head straight into that storm on the horizon or learn so much about your limits, pushing them back further than you ever knew was possible. It’s exhilarating and something I wouldn’t exchange for the world.

As mentioned in the intro this years edition is open for applications now, and if this interview has swayed you to take the leap you can follow the link here to work through the questions which will see you be approved to take part on what would be an incredible adventure.