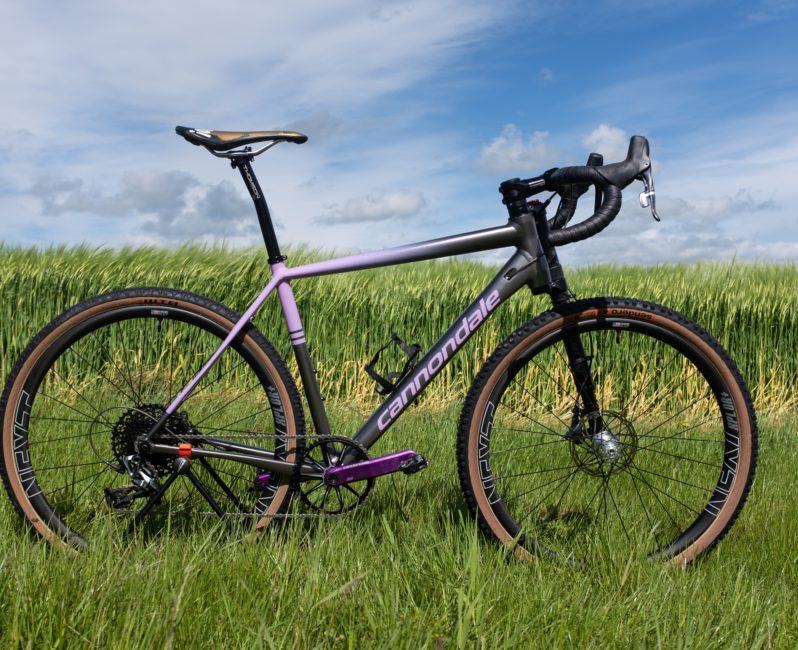 The Cannondale Slate needs little introduction to long term ‘gravelistas‘. When It hit the UK in 2015 though, no one really knew what to make of it. It looked like a road bike (sort of) but it patently was not, so that ruled the roadies out.  Gravel was not really a ‘thing’ by then either and for the few riders transitioning from MTB to gravel, the tyre clearance was just too small.  The choice of 650b tyres was extremely limited and no one apart from mountain bikers were that sold on the idea. The Slate looked like a bike without a real purpose, the buying public was confused and it was not the hit it deserved to be. 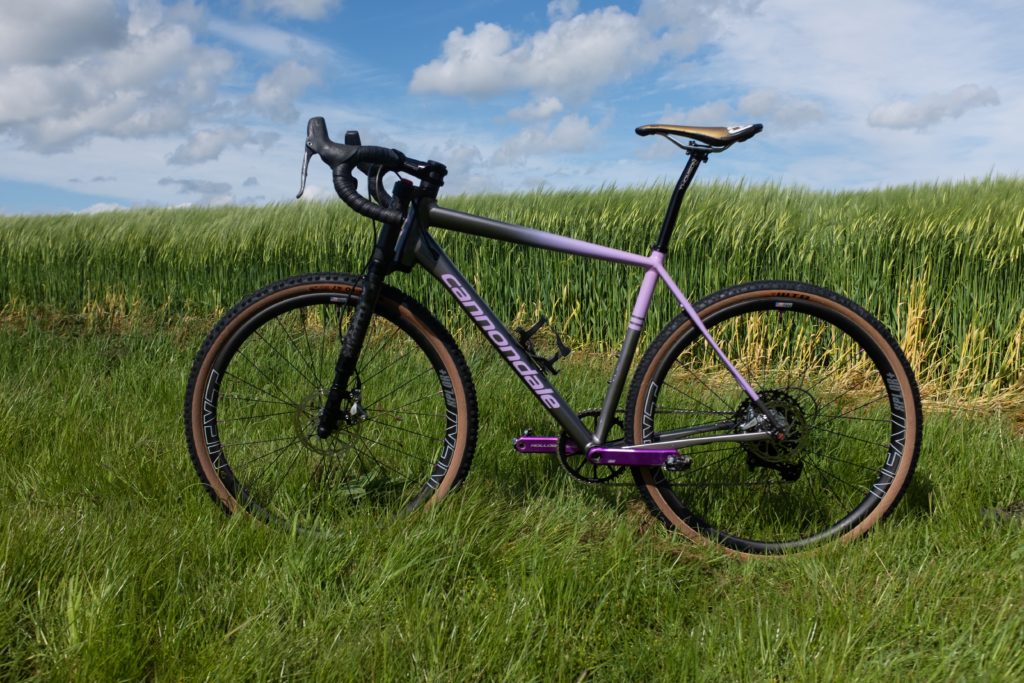 Consequently, the Cannondale Slate is a rare sight. Aficionados like to think of it as exclusive and owning one something to be proud of. Few riders though have actually ridden a Slate hard enough to bring out its true potential but we tracked down someone who has ridden his to two consecutive class victories at Grinduro Scotland.

As befits such a successful bike, it has been customised in the Royal Colours of Grinduro. You have to admit, it looks pretty cool. 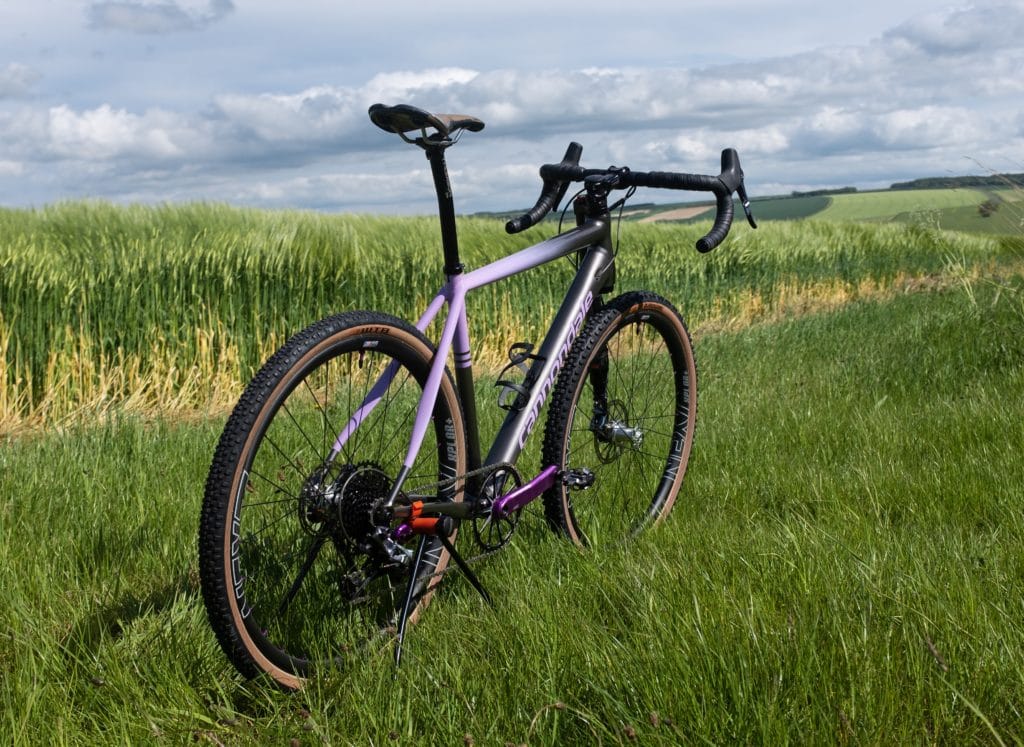 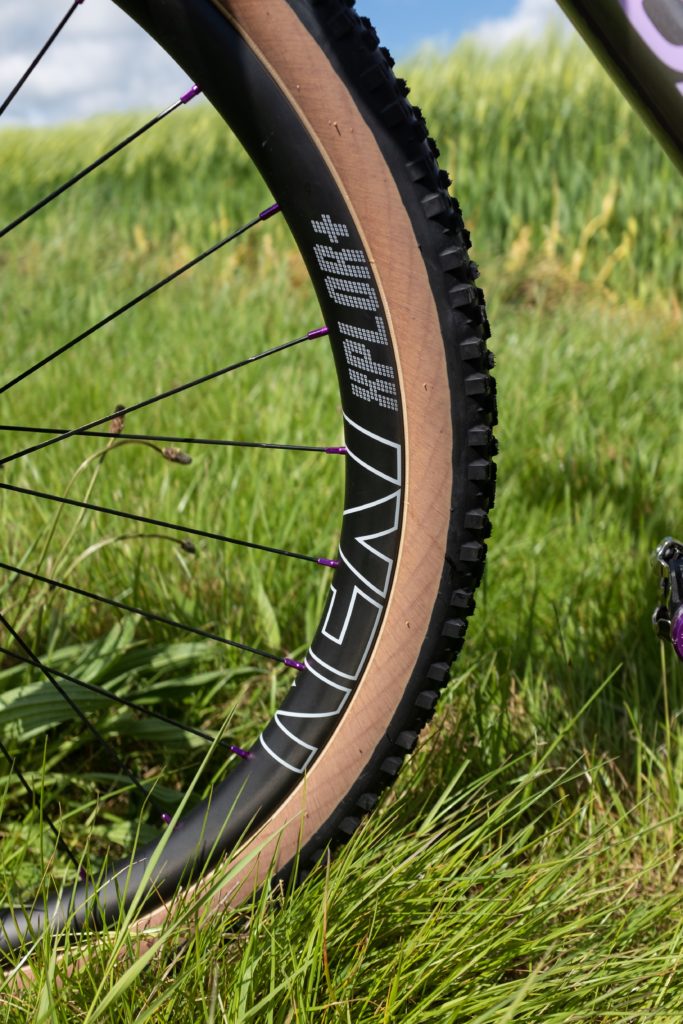 The whole bike is pretty cool, but what is your favourite part of the build?
Besides the KustomFlow custom paint, it has to be the wheels. They take an already fast bike to the next level, both in performance and visual impact. 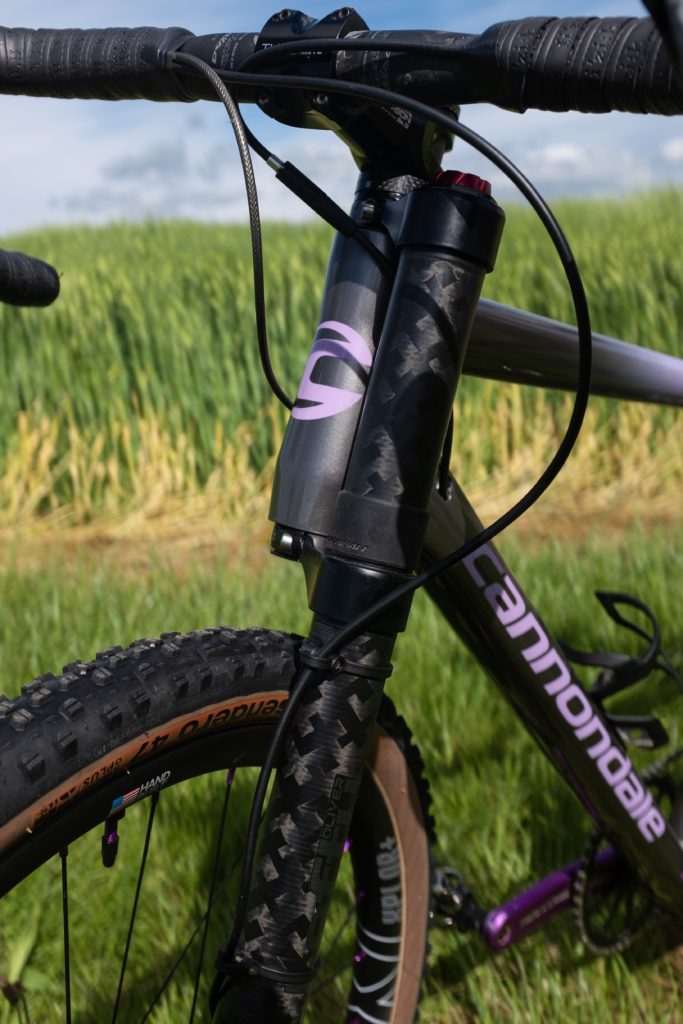 Go on then, talk us through it

The bike started off as a standard Slate, Force 1, with an XD drive rear free-hub and 10/42 cassette. All components were standard, including the awful Panaracer slicks that came with the bike.

Although they rolled quickly on tarmac the Panaracers were prone to puncturing and next to useless off-road if it was wet. The Schwalbe G-Ones I replaced them with were marginally better but in due course, these gave way to a pair of WTB Resolutes which were much more confidence inspiring. 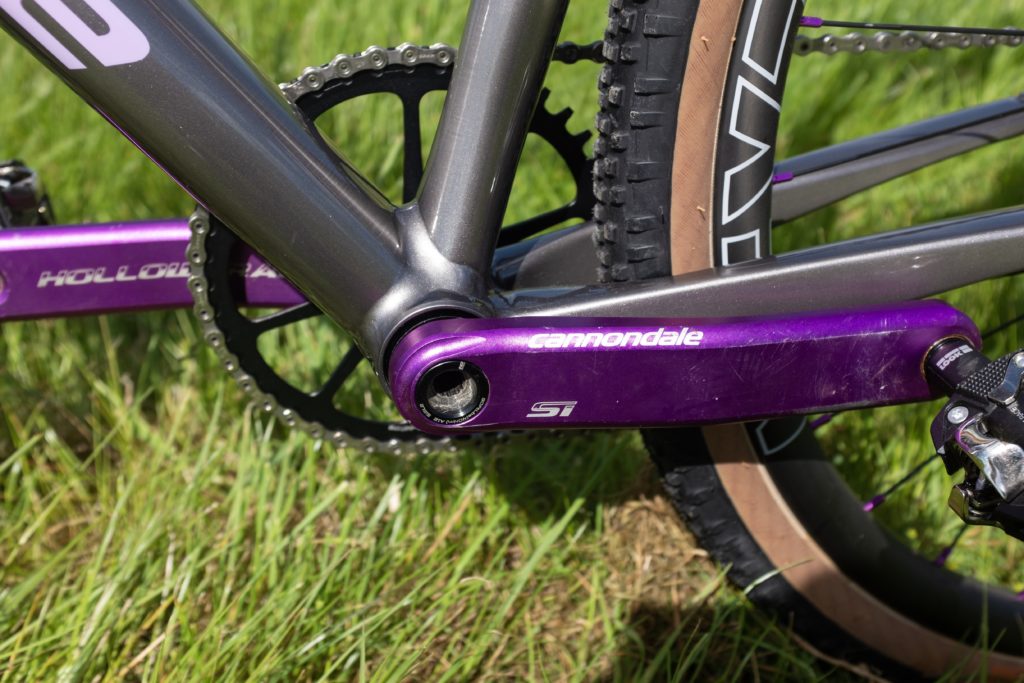 Although the bike handled well enough the steering was a little slow and I replaced the 110mm stem with a 90mm Thompson. This was a definite improvement.

I also found the cockpit a little cramped and fitted a Thompson lay-back post to give me a little more room. A pair of Salsa Cowbells provided extra steering leverage and I was almost there. 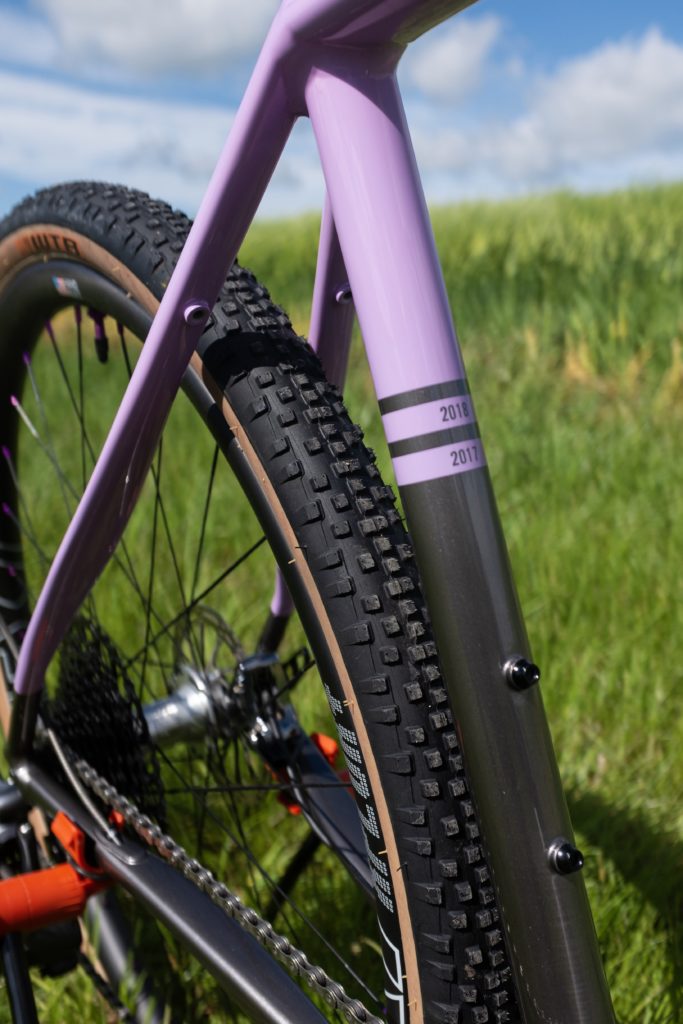 By 2019, constant riding and racing meant that the poor old Slate was looking a bit worse for wear. It was time to spruce the old thing up.

I stripped the bike down and sent the frame off to KustomFlow for a shiny new paint job. For a bike with such  prestigious Grinduro palmares, I just had to go for the Grinduro colour scheme. Then I sort of got carried away, as you can see by the photographs.

The generic Formula hub had given up the ghost by now. What better excuse to get some new wheels? I opted for a pair of custom built Next Cycling Xplor rims with Project 321 hubs, built by the very helpful and knowledgeable Jerry.

When I rebuilt it, the Slate looked and felt just like a new bike. 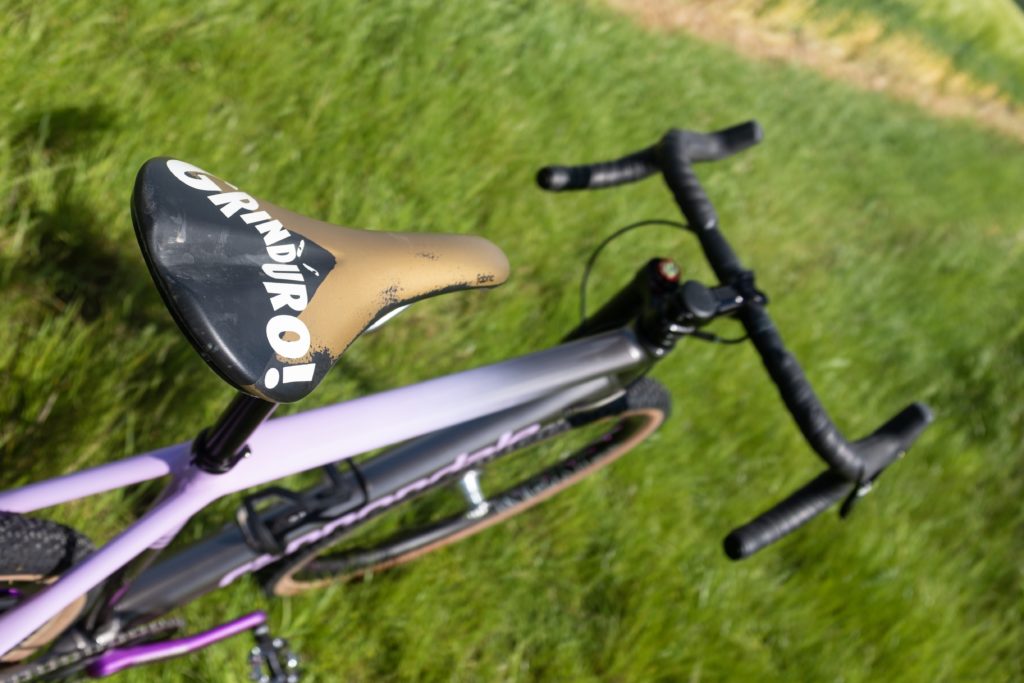 So what about the future?

The Slate is proving to be an ideal bike for gravel-bike enduros. Although it was withdrawn from the UK market in 2018, it is back for 2019. Maybe the Brits are beginning to ‘get it’ after all.

The Lefty Oliver fork is always a conversation starter, which always gives me the opportunity to sing the Slate’s praises. For anyone who has not ridden a Lefty…it rides just like a normal fork and you do not even notice that you only have one leg! 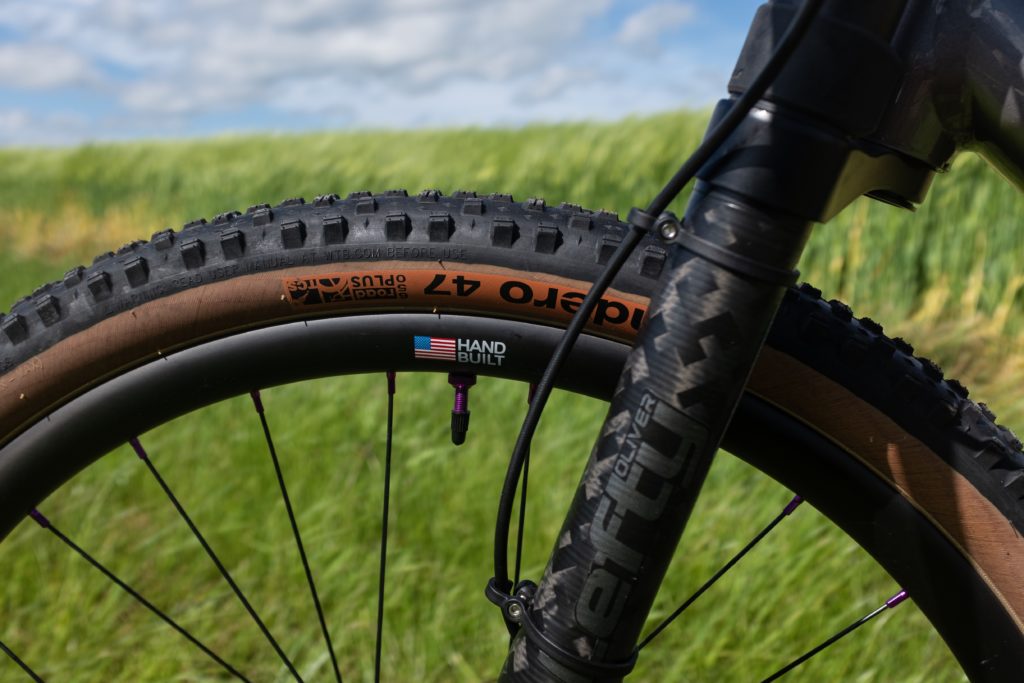 Ride it like you would a rigid fork and you will be surprised at just how fast you can cover the ground. The 30mm of travel irons out lumps and bumps that would normally slow you down. Forget it is there and simply be amazed at how fast you can go!

Maybe the biggest strength of this bike is that it is fun to ride.  That ‘fun’ element goes a long way to ensuring I will be riding this rather special Slate for a long time to come.

Thanks for the great review, would a 47mm tyre not fit within the rear triangle?

Frustrating, but there you go!

Hi James and many thanks for the prompt reply, that is a real shame; One of the reviews stated a WTB Horizon 47 will fit, I was hoping the WTB Venture will also fit.

47mm slicks will fit but knobblier ones not 🙁 I almost managed to get a super king in with some sanding of the tread.
So other than the resolute any good winter knobbly tyres that fit with good mud performance ?

Hi David and many thanks for the reply and apologies for the lateness of mine. I managed to fit Continental terra trail 47mm with about 3-4mm clearance each side, very fast and grippy.