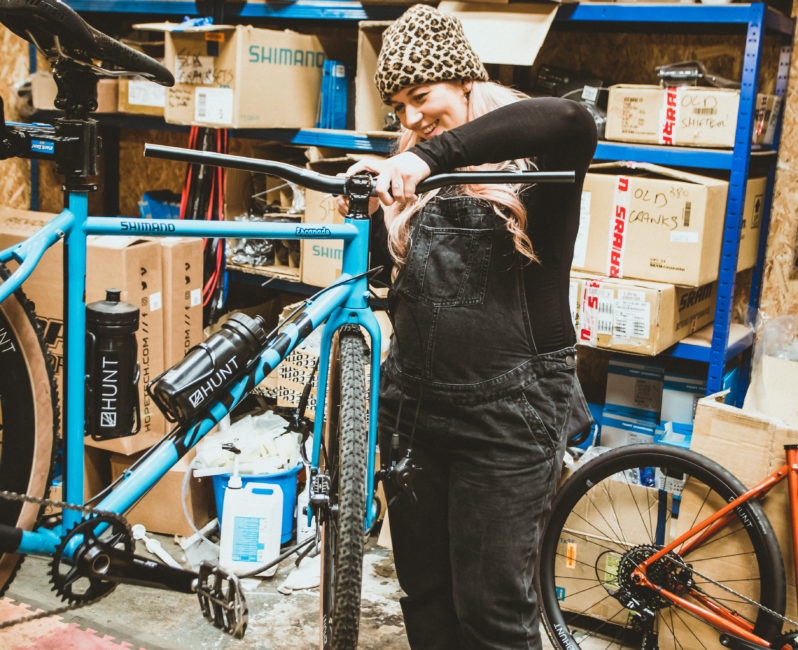 When riding is central part of your life and things happen, you adapt, and that’s just what mountain biker turned gravel rider Kelly-Jayne Emmerson has been up to. We chatted to Kell about her experiences riding through pregnancy, and how an upgrade to her Cotic Escapade is making all the difference.

“Do you know what,” Kell confides, “I’m so happy that I’m still riding, so many women that I’ve spoken to told me that they had to stop at around 25 weeks, just ‘cos it was so uncomfortable, so I feel really lucky that the guys have hooked me up. It would be so boring if I couldn’t go out riding. Just getting out there.”

At 28 weeks pregnant, Shimano Gravel Alliance member and Cotic ambassador Kelly-Jayne is certainly still getting out and about by bike, thanks to a little help from these teams that’ve helped redesign her gravel build for a more comfortable ride. Let’s take a look at the transformation. 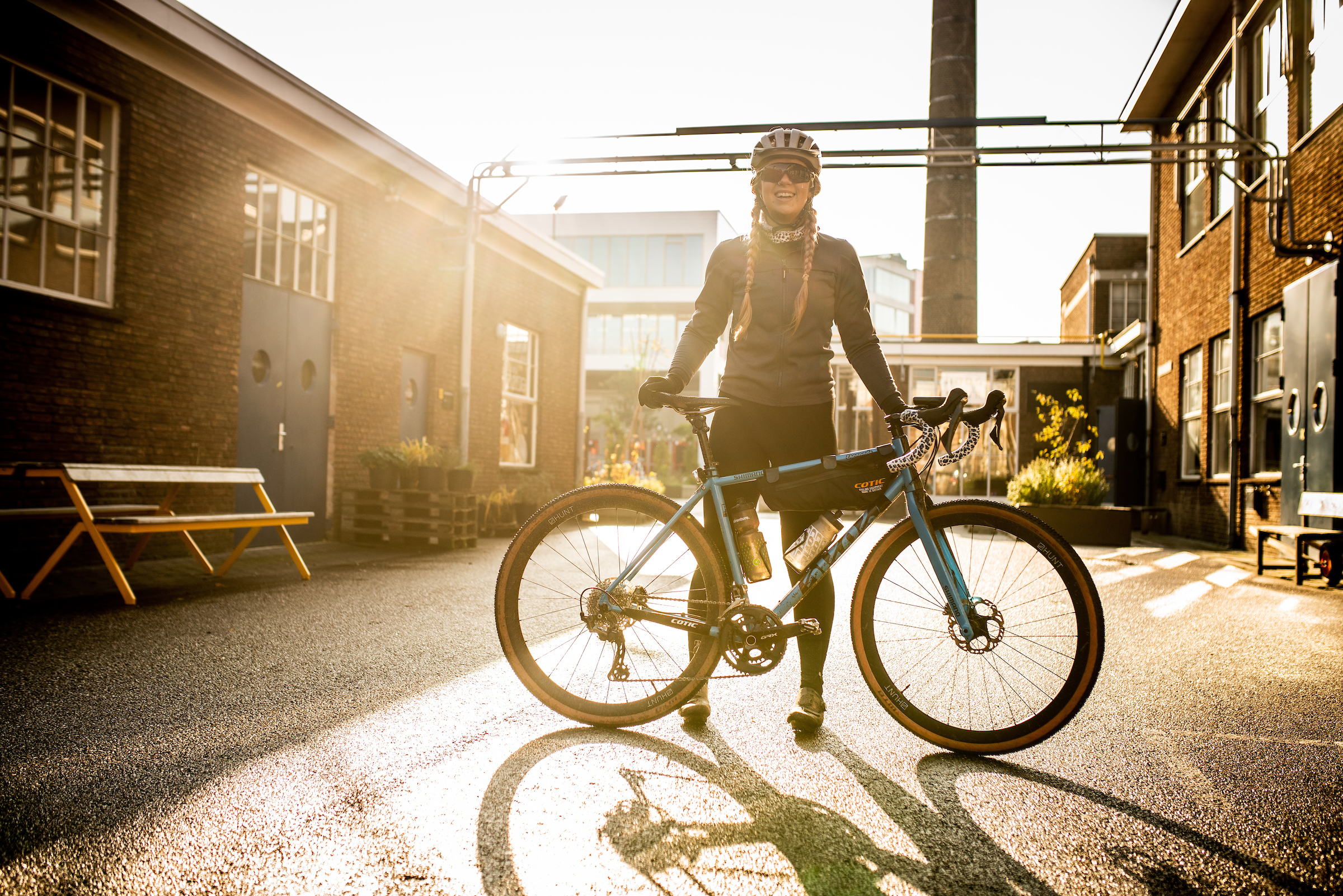 During 2019, Kelly-Jayne and her beloved electric blue Cotic Escapade were pretty much inseparable. From riding the Dirty Reiver in Northumberland, the Duke’s Weekender in Aberfoyle, Scotland, the Lakelander Gravel Grinder in Ireland to riding Canadian gravel in Ontario, Kell had a jam-packed summer season on board her newly build Escapade with full Shimano GRX 800. She’d chosen to stick with mechanical shifting when she’d upgraded from Ultegra, and opted for the wide-ranging 2X drivetrain with  48/31T.

Oh, and the unmissable leopard print bartape, which in case you hadn’t noticed, is pretty much Kell’s signature style.

In reality, switching from drop bars to flat bars is a little more complex than just switching out some alloy… and at the same time, Kelly-Jayne decided to switch to a new Shimano 12-speed XT drivetrain to give some easier gears too, paired with SLX brakes front and rear. Cotic provided the bars, while Kell opted for a short 35mm PRO Tharsis Trail stem and grips.

Cotic also had a rebrand with their updated logo earlier in the year, so the team took this opportunity in the Cotic workshop to update the Escapade’s head badge, featuring the gritstone edges you can see from their HQ in the Peak District, just a short journey from Kelly’s front door. 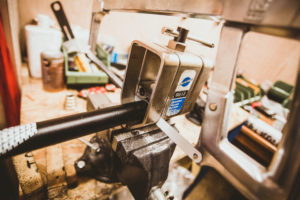 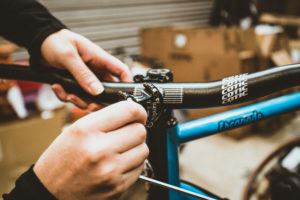 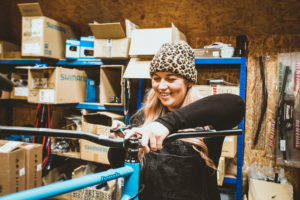 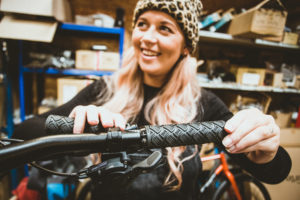 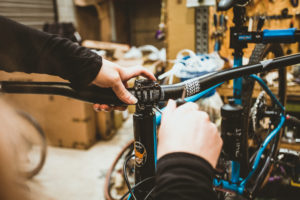 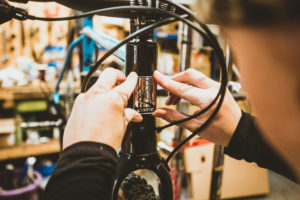 After a few rides on her updated gravel bike, Kelly-Jayne’s verdict is already clear. “It’s awesome, so upright. I don’t have to lean forwards at all which makes it so comfortable, ‘cos it’s got such a short stem and the flat bars just makes such a difference. My thighs were hitting my bump when I had drop bars which really wasn’t ideal, so I’d have my legs spread open wide way too much and be really uncomfortable cycling, so yeah, I’m really happy now.” 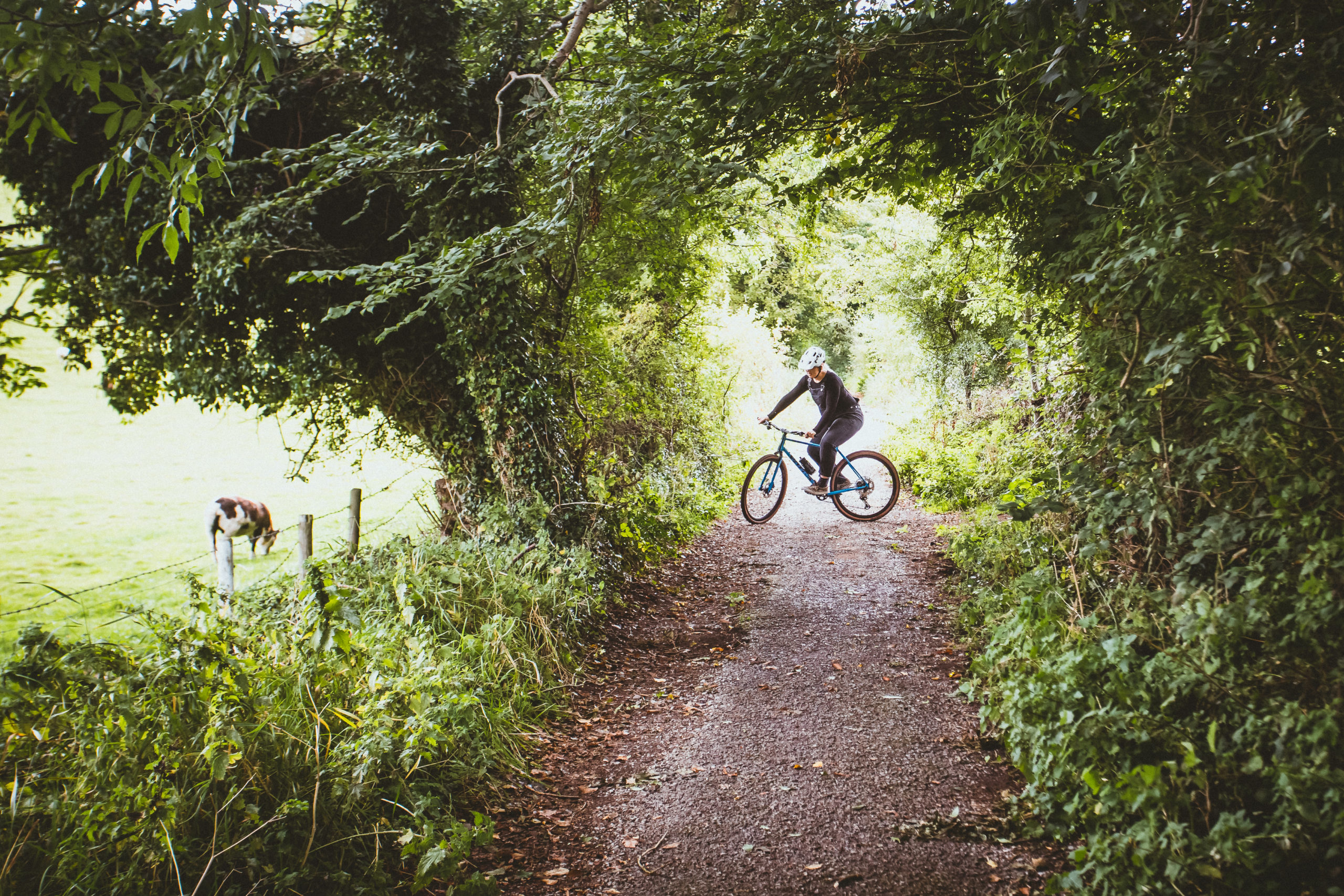 Alongside her gravel bike, Kell’s also got her hands on an e-bike too, “I used it on Sunday to ride with my friends, and that’s definitely gonna be the one to take out on bigger rides, y’know when you go out with a group of people and you’re always at the back and feeling really bad”. Having visited and enjoyed the incredible Peak District riding on Kell’s doorstep, I can attest to just how steep it can be around there too. “I can’t even go to the shop without having to go up a huge hill,”, Kell says, so the e-bike has been a game changer for her, and makes for a good mix with the Cotic Escapade. 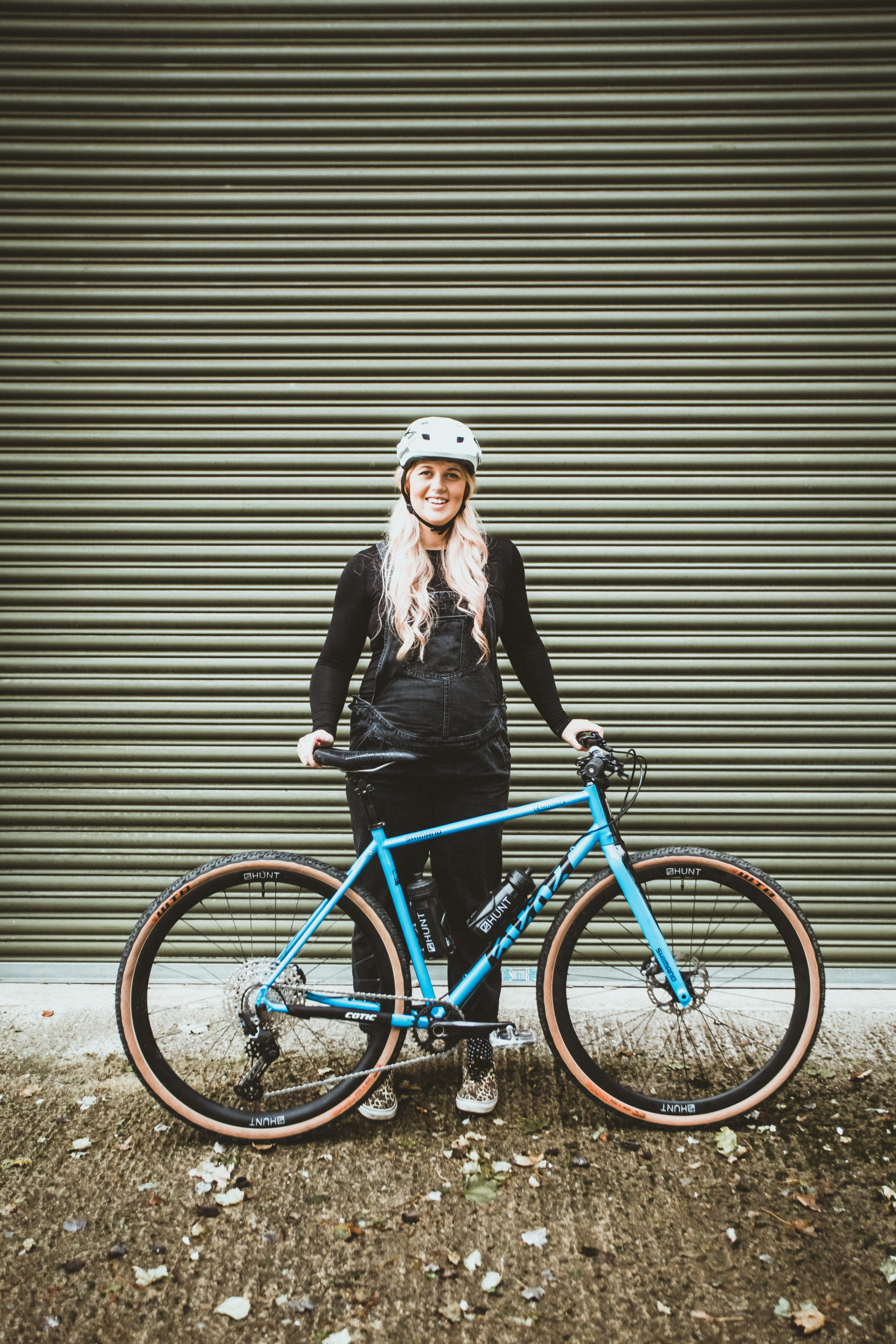 Kelly-Jayne will have to make up for the lack of leopard print bar tape now with other accessories, like shoes…

Although the new flat-bar Escapade and e-bike combo are perfect for the time-being, we can’t help but dream about what’s next for Kelly-Jayne and her bump. “I think I’d like to try a trailer, I don’t know how old they’ll have to be, but I’d love to get on the trailer hype still with the flat bars I think,” Kell admits, “I definitely want to try one of those seats that go on the top tube too when they’re a bit older, and that’ll be easier with flat bars… plus it’s now easier to hold Bell (her Staffie trail dog) on my gravel bike now with flat bars rather than drop bars with the lead”! 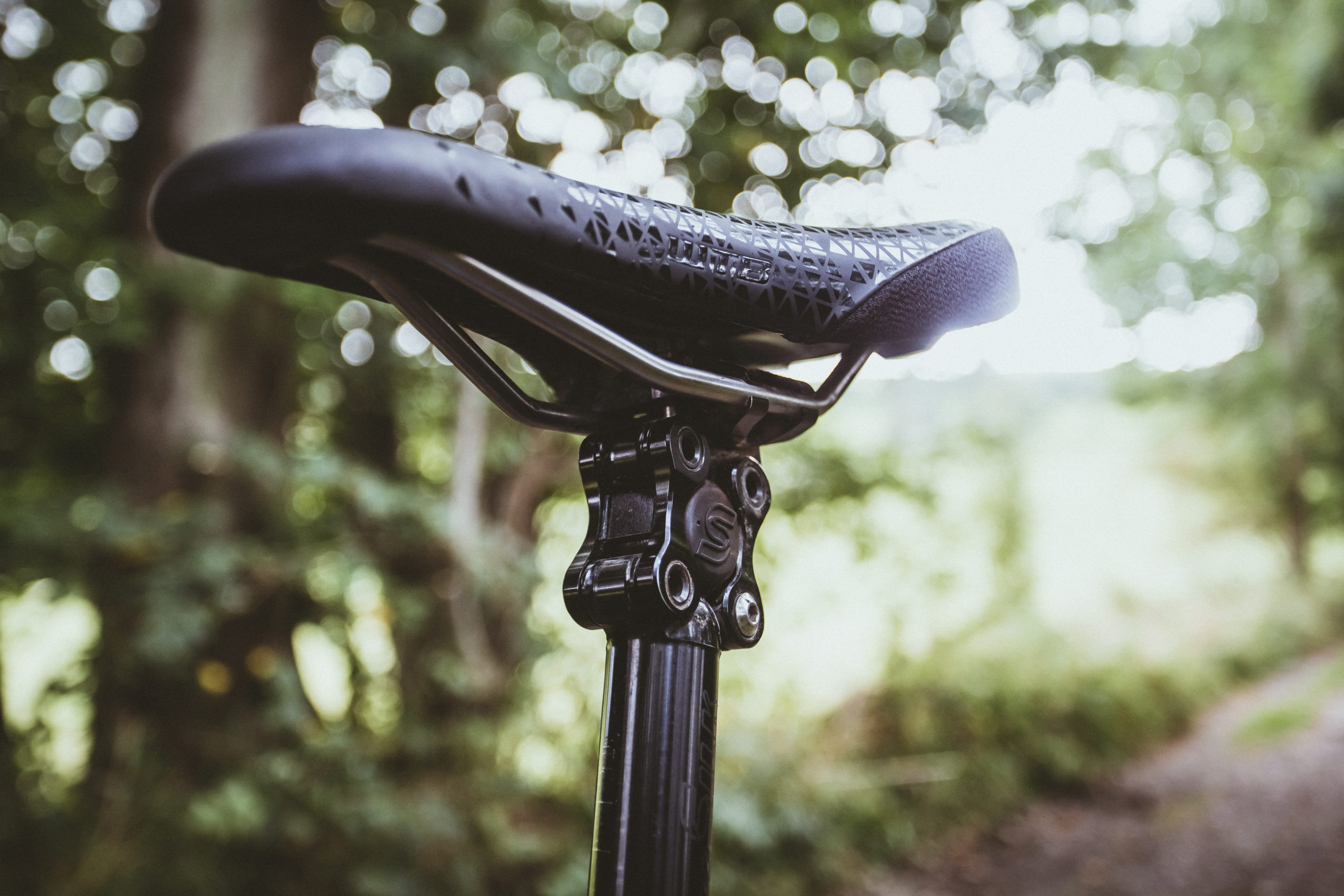 Kelly’s been running the Cane Creek eeSilk for years, but it’s coming in even more handy than ever now

“The Cane Creek eeSilk seatpost is awesome too, I absolutely love it. I don’t know why more people have it”. Kelly-Jayne has always enjoyed the 20mm travel seatpost on her Escapade build, but seemingly now more than ever. “Especially now I’m pregnant, because I’ve gone from not even wearing padded shorts for mountain biking to wearing a chamois, chamois cream, change my seat, really that’s been the biggest change since the start of my pregnancy, it’s just felt so uncomfortable to having the eeSilk makes it really comfy as well. I didn’t know that, before I got pregnant that that would be a thing, maybe after but I didn’t expect that before the baby.” 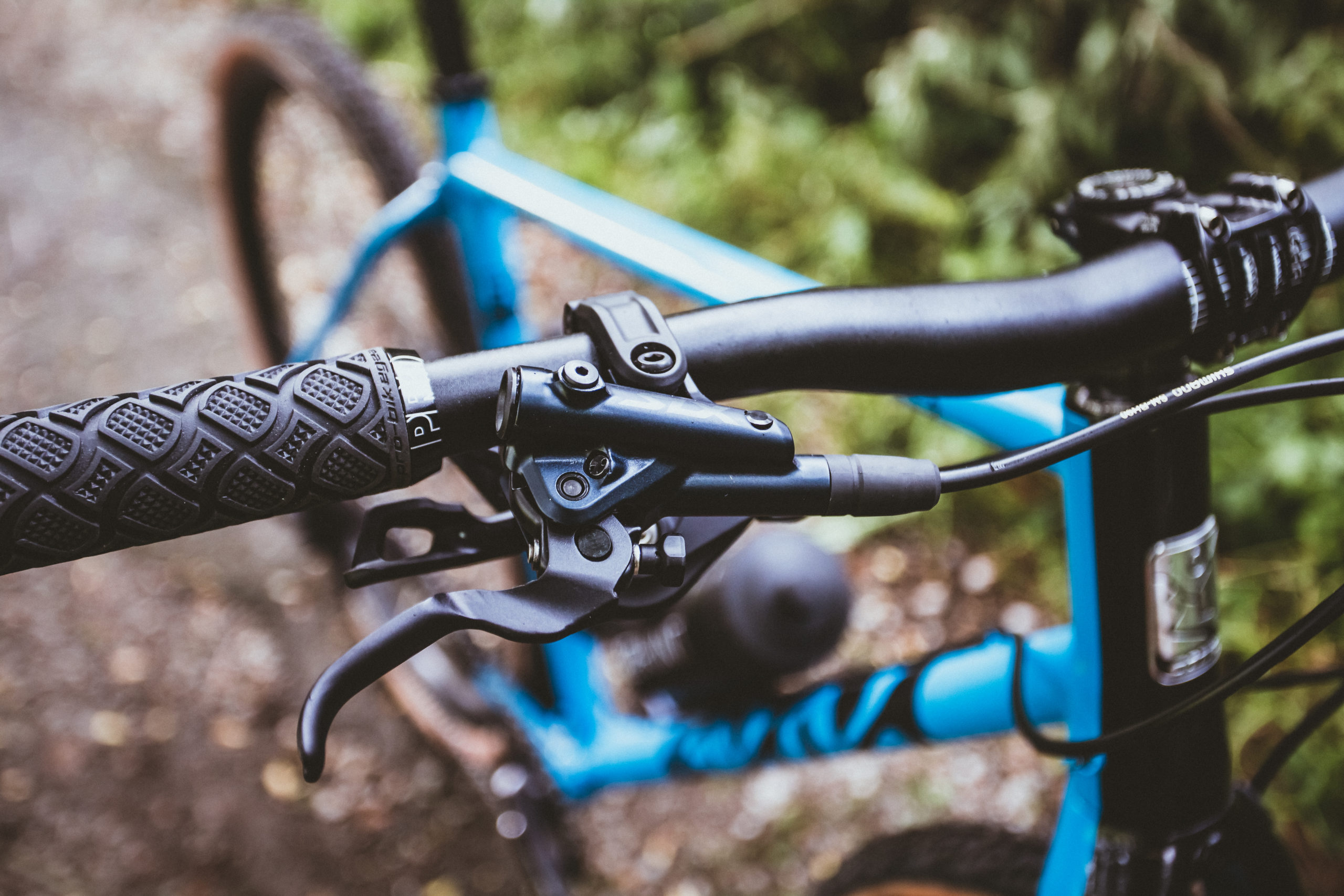 We’re really stoked to hear more about Kelly-Jayne’s pregnancy cycling soon and wish her all the best over the coming months. One thing is for sure, with a mum like Kell and mountain biker Aiken as a dad, their kid is fated to have serious bike talent!

Try some more swept back bars. I have the On One Mary bar and it was amazing for offroad riding whilst pregnant.

Try a Jones H Loop with the 2.5” rise. Probably won’t look quite as cool but will definitely allow you to keep riding