Midweek Local Overnighters – A new Impression of the familiar 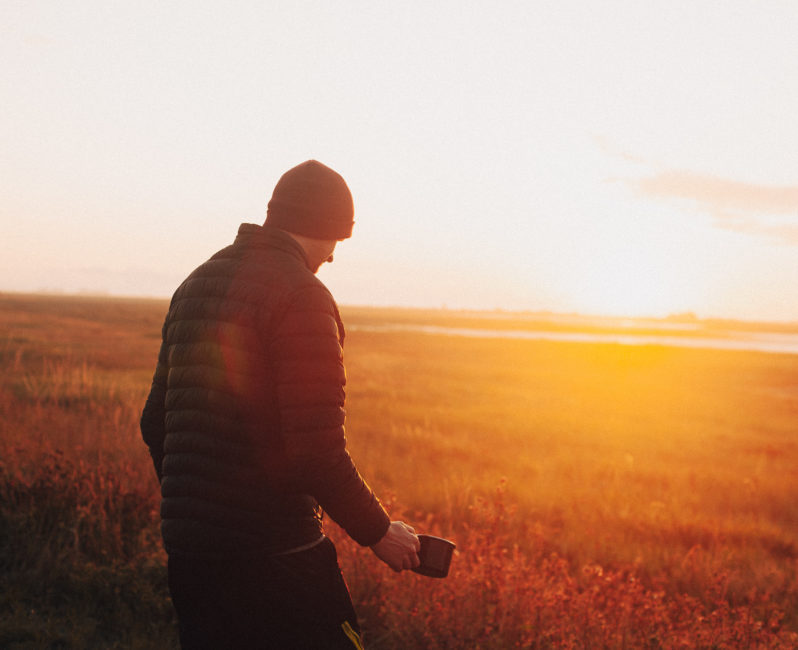 We all have to start somewhere, and with that come the mistakes and challenges we are all prone to making as beginners. Michael Drummond talks of his anxieties on touring, wild camping for the first time and the rewards of going for a local overnighter.

Camping can often be a logisitical nightmare, and if like me you like to plan, write lists and overthink it can take that little bit longer than most. Lists confirming lists, labelling dry bags, checking gas levels in canisters and of course remembering the all important seasoning shaker, just to make sure the tin of beans tastes different slightly for the 6th night in a row.

During my first time touring i was unwittingly ticking off all the beginners mistake tick boxes, overloading the bike, not remembering what bag i put my jacket in, forgetting a spare tube and the rest. I now see these errors as more like rites of passage, teaching points for myself to take forward and avoid repeating in the future.

Avoiding only some times it has to be said… 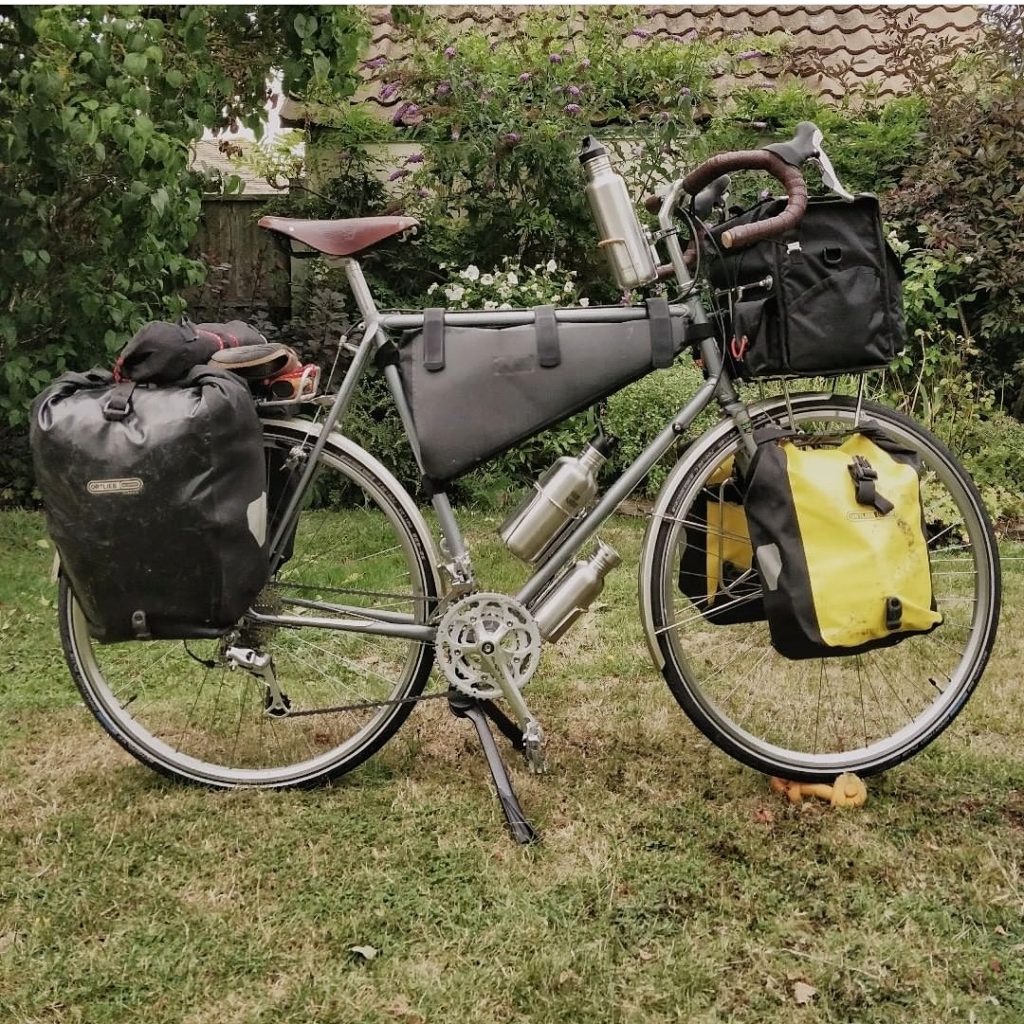 Aside from the bike, the bags and what to put in them though one of the things that instilled the greatest fear in me was the camping itself, more specifically wild camping. I had long been dreaming of setting off on fantastical journeys into the wild, days of food, a camera and journal in hand waking up amongst the pristine wilderness that I used to see on BBC nature documentaries and printed in National Geographic magazine.

But there was some sort of invisible barrier to this becoming a reality, a sort or leash just keeping me from crossing the threshold into this paradise i set my heart on, whats more all this time i was day dreaming of camping carefree on coastlines, mountain valleys and remote woodlands in the north; all far off lands but I never once gave any thought to searching out what i had on my doorstep.

The local parks, small pockets of woodland that the occasional dog walker or rambler might use were almost invisible, i just couldnt see the wood for the trees….

Perhaps its a textbook case of Wanderlust and the drive to get out and discover which perhaps makes us, or more specifically me skip over the offerings of a local camp spot, but slowly slowly i have warmed to the idea, and last year with the world shrinking down in size and nearly all paths, tracks and bridleways getting unlocked as it were I began to see patches amongst the trees and clearings just right to bed down in to fulfil that sensation of escapism. 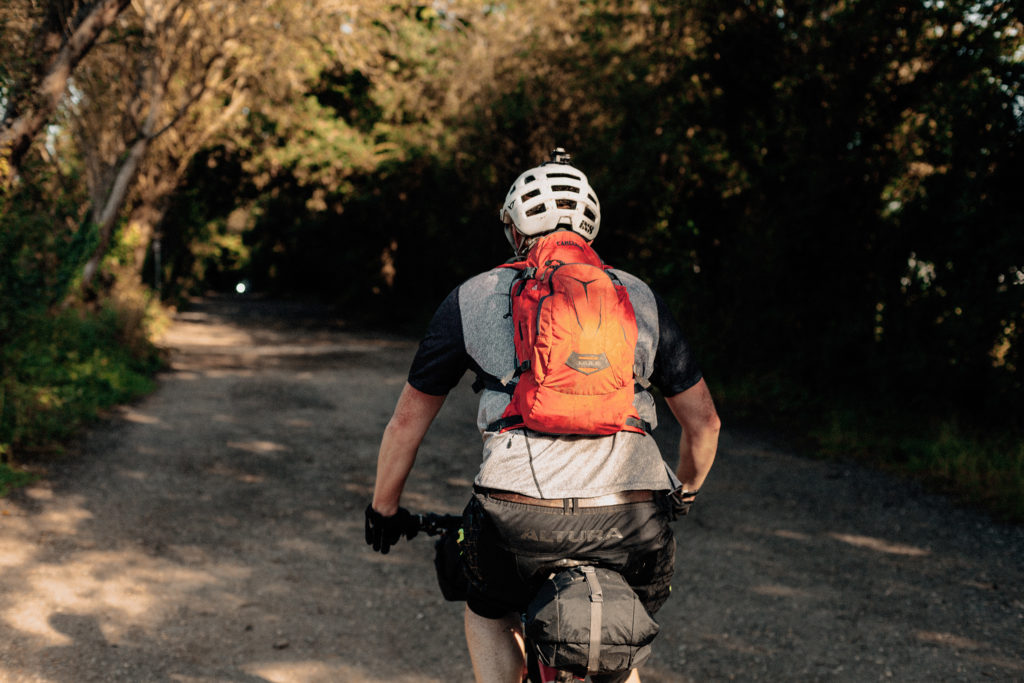 With a break in the weather and a desperate desire to switch off from modern distractions for both mind and body’s sake, a quick WhatsApp exchange was executed, a rough camp spot agreed upon and my good friend Jack and i hopped to it a little before dark.

Both on our mountain bikes and carrying only what would be needed for the next 12 hours we churned through mud and wheed whacked our way along overgrown riverside tracks, our derailleurs collecting botanic samples as we go. 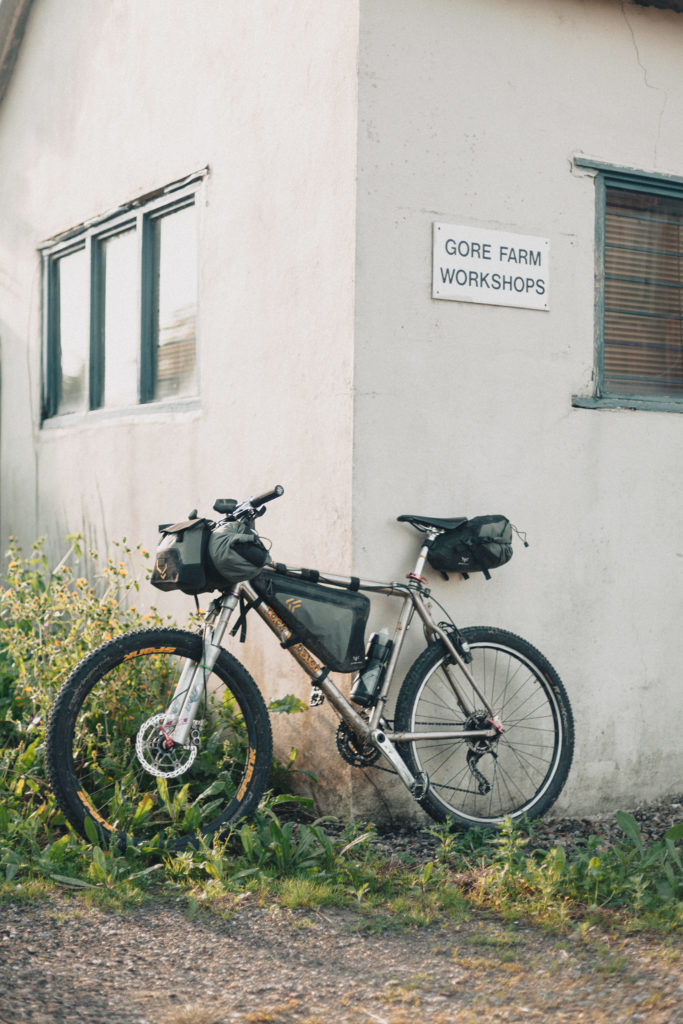 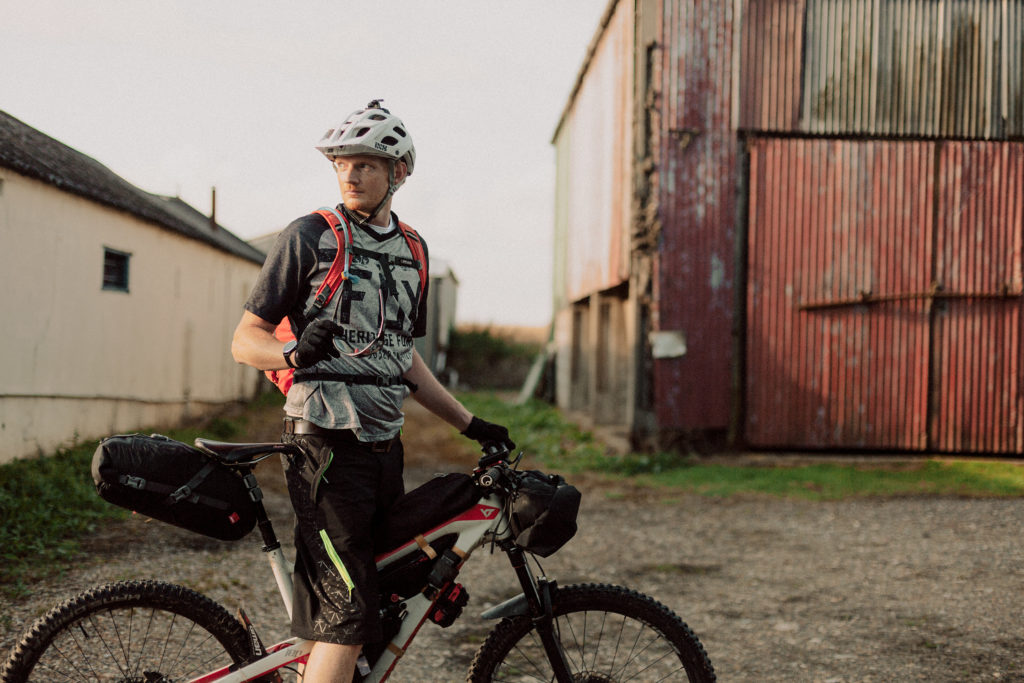 We had never ridden these tracks at night, the landscape was alien and the sounds of wildlife ever more present with our other senses out of their depth, rendered almost useless as we continued away from the setting sun and further into the dark.

Our mission to intercept its inevitable arrival some 9 hours later, laying in wait under a starry sky.

Only a puncture hampered our progress, but we arrived to the bivy spot and set about rustling up or meals. One pot cooking like pro’s….

Noodles, tofu and spring onion, an attempt at some sort of ramshackle Ramen.. It filled the whole and that was that. 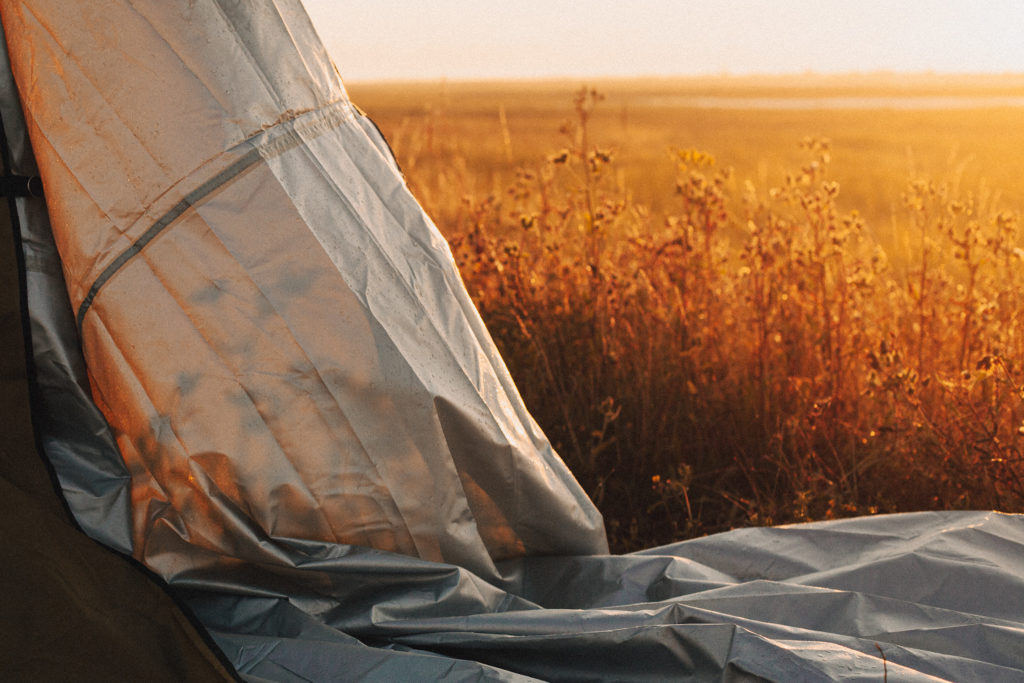 Leaving late had skewed our perception of time and soon enough after hours of talking away and making good our sleeping bags and the rest the clock hit 1.

Way past bed time on a school night.

Jack slid down into and under his bivvy suspended from the handlebars of his bike and I opted for a full galactic viewing experience.

In fact, on jack asking  “are you not sleeping under the tarp?” i looked up and around while my bum wriggled into the bivy and uttered softly “naa I want to watch the stars”.

Just as my brain wrangled the S, T, A and R together to transmit to my mouth a firey streak sliced across the sky above, lasting almost 2-3 seconds.

The sensation of joy was overwhelming and instantly the trip had elevated to a level 10, platinum medal experience, a reward like no other. 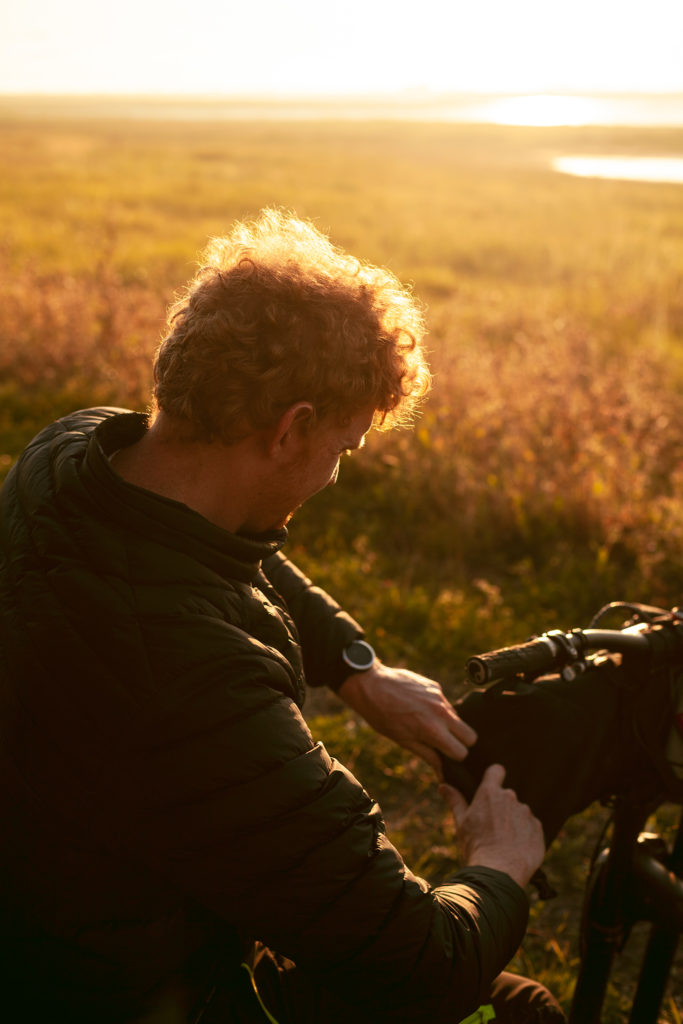 Just like the fireball up on high my conscious thought was also to extinguish and ebb out to black, eyelids heavy awaiting the next palette of warm tones that would bleed out into blue skies.

Even after the briefest of sleeps It was a perfect morning to wake up to, just four hours of shut eye the fresh air and views convinced the soul and body of a full eight. 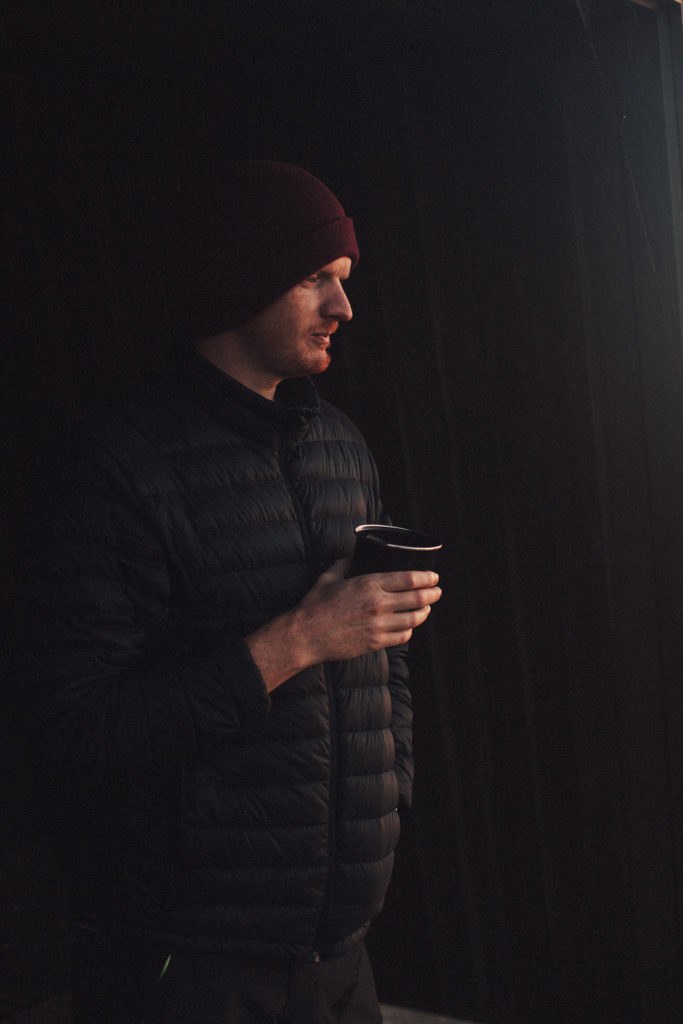 The regenerative sensations of instantly being greeted with the rising sun, views undisturbed by buildings and artefacts of modern life are plentiful and I wish we had done it sooner.

After packing away our kit, loading up our bikes and ensuring no trace of our stay in tranquility was left we turned our back on the sun and returned home to our respective day jobs.

Safe in the knowledge though that we started in the best way we knew how. 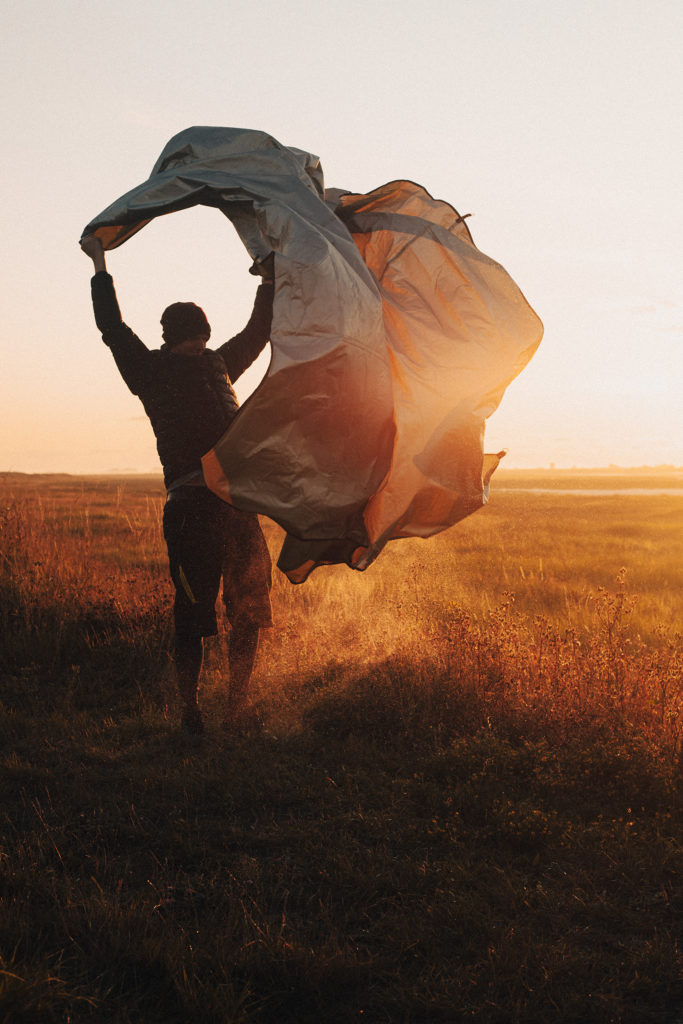 We would love to know what has perhaps held you back from camping local, camping wild or taking on trips in the past, and more Importantly would love to know if there are things we can do both at ADVNTR and in the wider community to offer tips or share advice to make it an easier adventure to take on.

Noodles, tofu and spring onion, an attempt at some sort of ramshackle Ramen.. It filled the whole and that was that. You’ve let a typo slip through there – but you know what, it improves the sentence, because food, particularly shared in such a situation, not only fills the hole but makes us whole. So thank you for the typo and thank you for the whole piece, which expressed the joy of simple escape (and was well written!). And to answer your question about what has held me back from similar trips, it’s mostly the difficulty (in my mind) of… Read more »