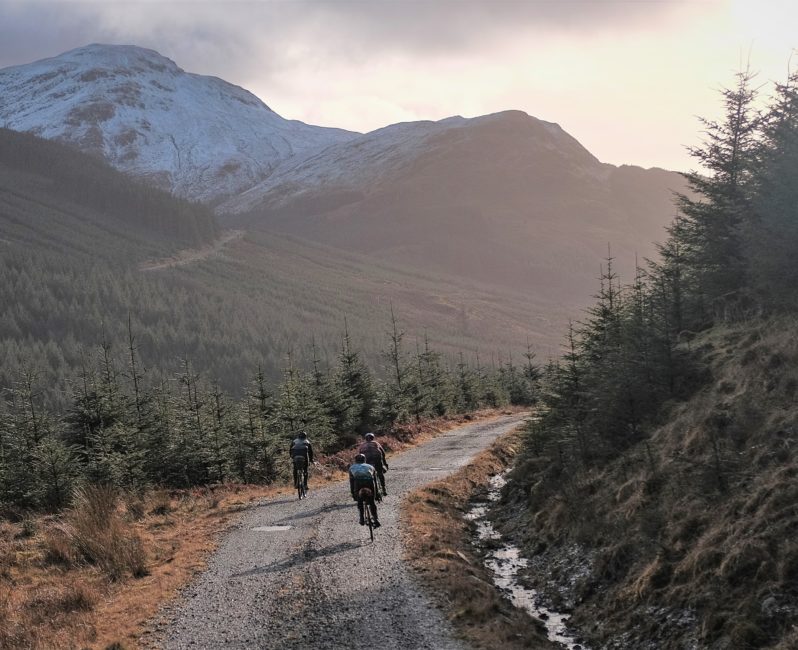 There’s nothing like a country-wide lockdown to get you thinking about adventures past. Marcus Nicolson recalls a trip taken with friends to Arrochar in January 2020.

Our group assembled at Queen Street station in central Glasgow on a dark Friday evening in January and hastily made our way to the Fort William train. There are loads of bike spaces on this one, so usually no worries there! We said good luck to a couple of mountain bikers we met on the train, who aimed to tackle the West Highland Way in under two days. That’s no easy feat… I wonder how they got on!? 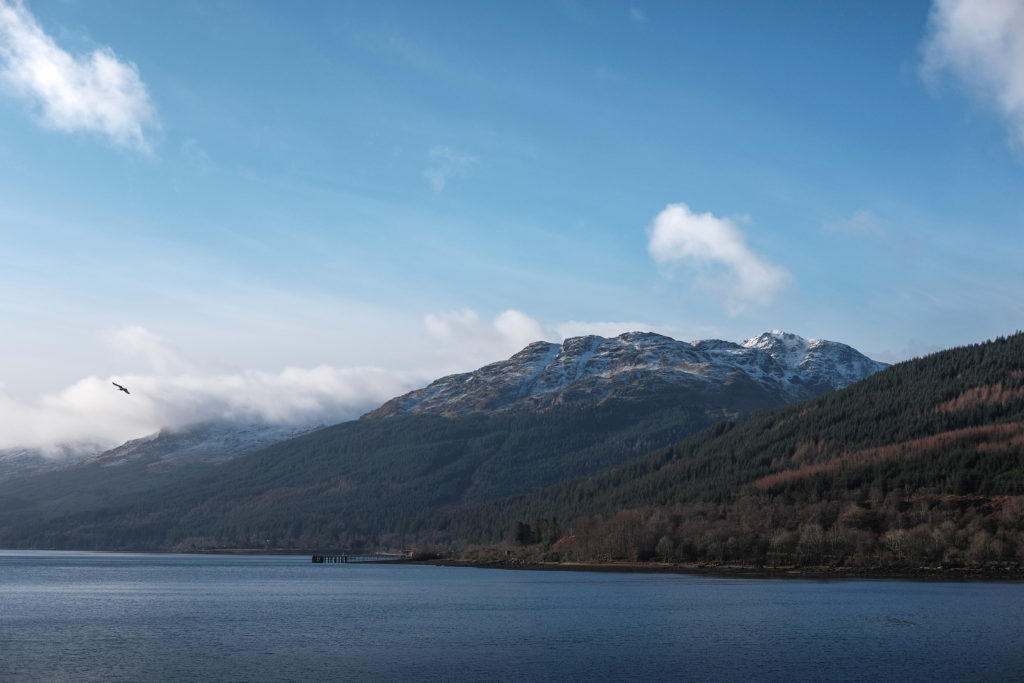 With views like this, you won’t care if it’s cold.

As we departed the train in Arrochar, it started to rain. Typical. We opted to scoff down fish suppers before setting out to the bothy on the Ardgartan peninsula, on the shore of Loch Long. There is a great off-road route out to the bothy with enough climbing and river crossings to work up an appetite for a second dinner upon arrival at Mark Cottage. 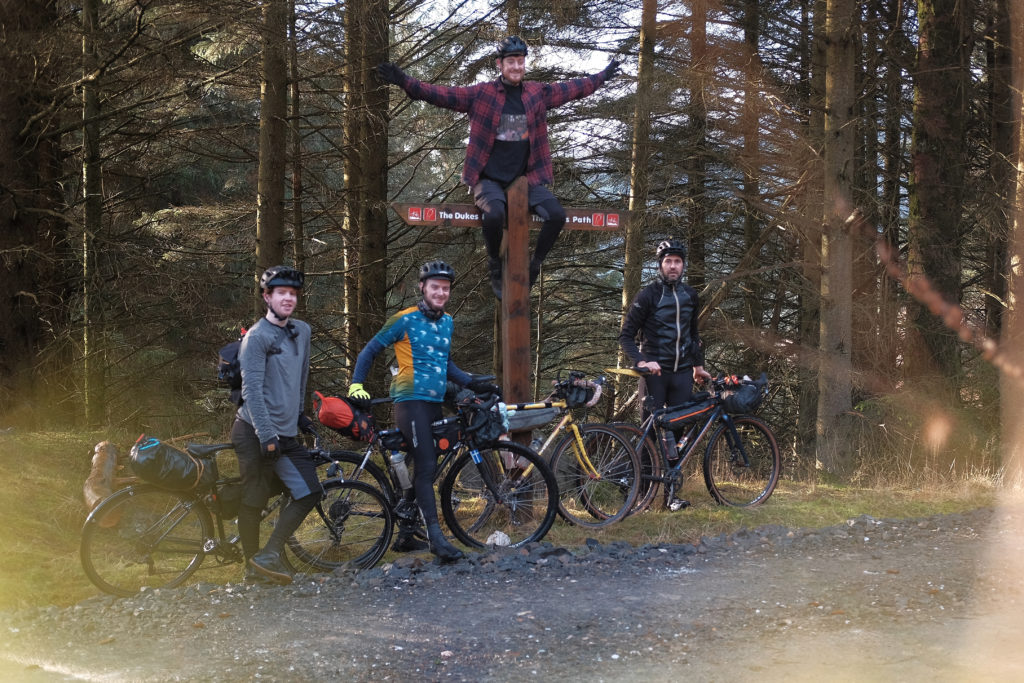 You can take the hybrid out of the city…

The descent down to Mark Cottage is bumpy and very slippy in places. I realised later that my lack of control down the track wasn’t helped by a punctured rear tyre! Here it should be noted that our photographer, Doug, was riding a city hybrid bike with slick tyres. He plummeted down the descents faster than any of our gravel bikes with grippy tyres. We’d cautiously hold back, waiting for inevitable tumble, but Doug luckily kept it rubber side down. Skillz… 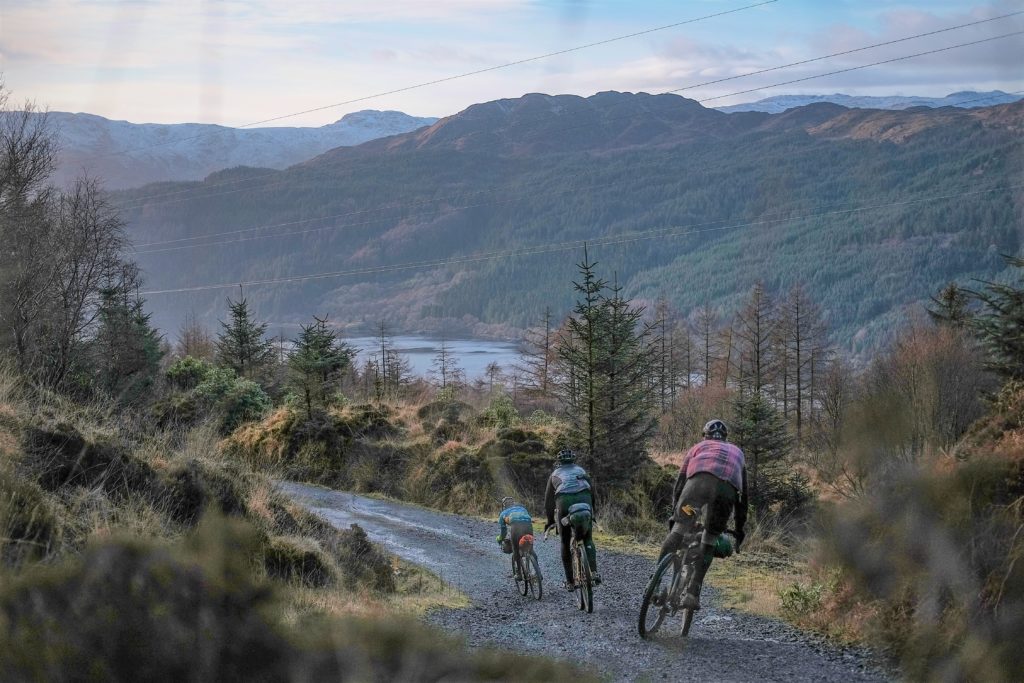 Winch and plummet to Mark Cottage.

The fire in the bothy was well underway and we introduced ourselves to our fellow eccentric bothy-goers. Together we were an assorted mix of hill walkers, boating enthusiasts and adventure cyclists, all equally smelly and in need of a good night’s rest! After a second dinner we passed around a bottle of cheap blend whisky and settled down in our sleeping bags for the night. Mark Cottage sits directly across the water from an oil terminus. While not the most aesthetically pleasing, it is quite a sight to wake up to. 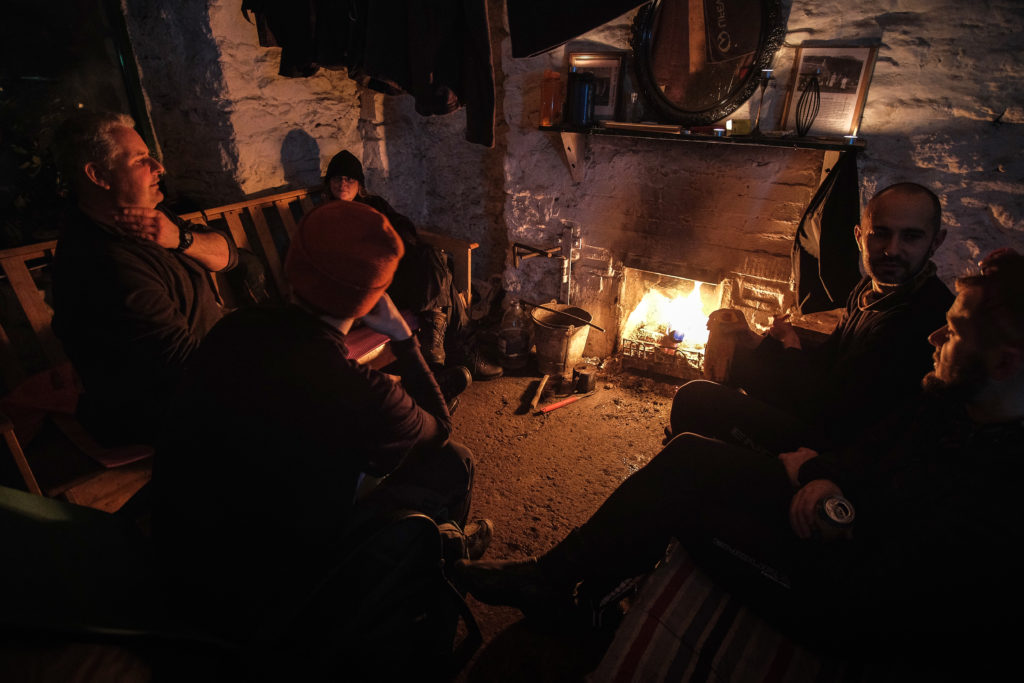 There is no better feeling than arriving at a bothy to find the fire already roaring away.

The morning started fresh, crisp and cold. After some puncture repair, we made our way back along the forest track to Arrochar village, via a stop at the roll shop (cash only). We continued along the road and up the steep climb at Glen Douglas before beginning the real gravel riding fun on the ‘Wild About Argyll’ route. 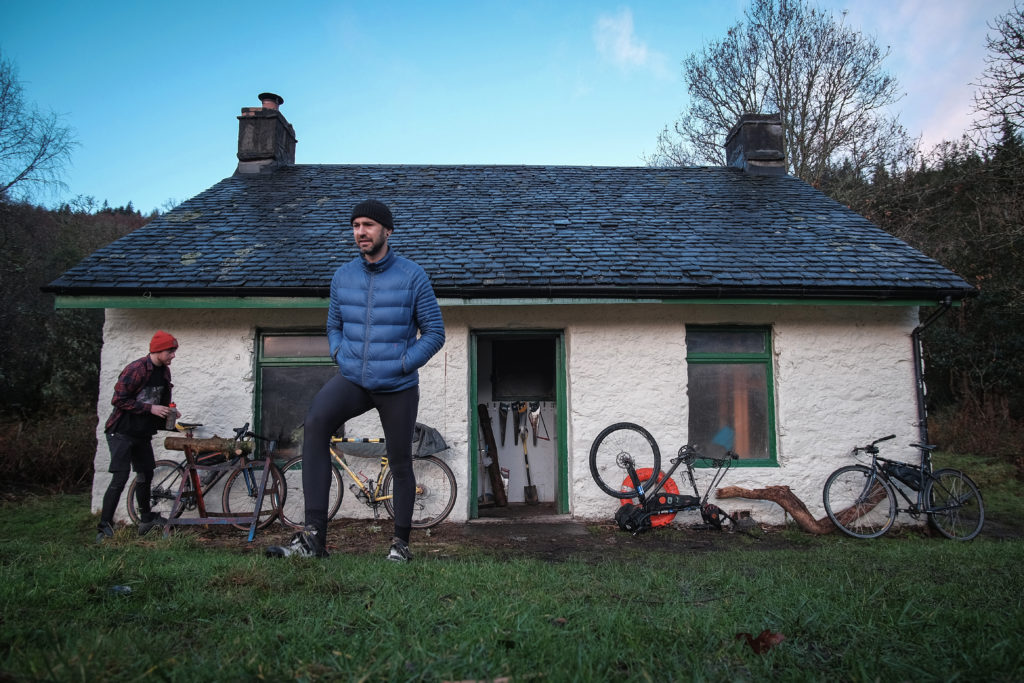 Waiting outside Mark Cottage during the pre-morning puncture and bike prep faff.

I’ve ridden a lot of this brilliant route which goes all the way around the Argyll coast, to Oban and beyond. This bit, while closer to Glasgow, is actually one of my favourite sections and includes a great mix of gravel paths, fire roads and only very short hike-a-bike sections. You can ride to Helensburgh, or continue on to Balloch as we did. Some of our group took the train back, or continued elsewhere. I opted for the snoring-boring cycle path back to Glasgow. You can check out the route we followed here. 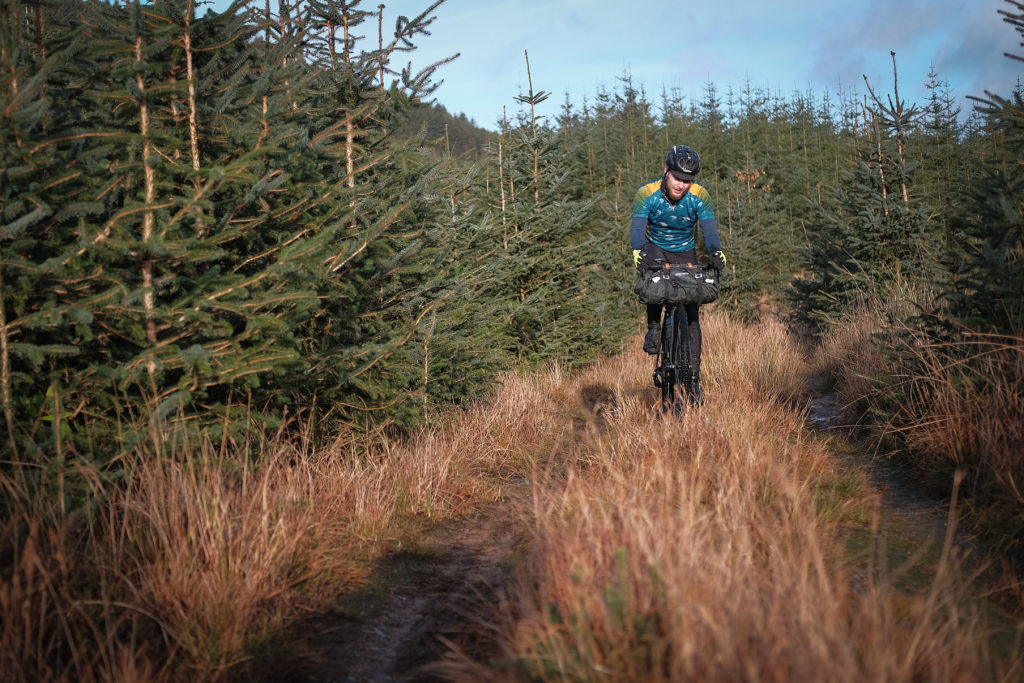 The ‘Wild About Argyll’ route has a great mix of terrain to keep everyone entertained.

There are lots of options to mix up the Wild About Argyll route with public transport (when it is possible to do so again). A popular option is to start/end a route in Dunoon which is easily accessible by ferry from Gourock. Our mini-adventure in the Scottish winter shows that you don’t need to travel far from the bigger cities to find some great off-road riding and get a sense of adventure. 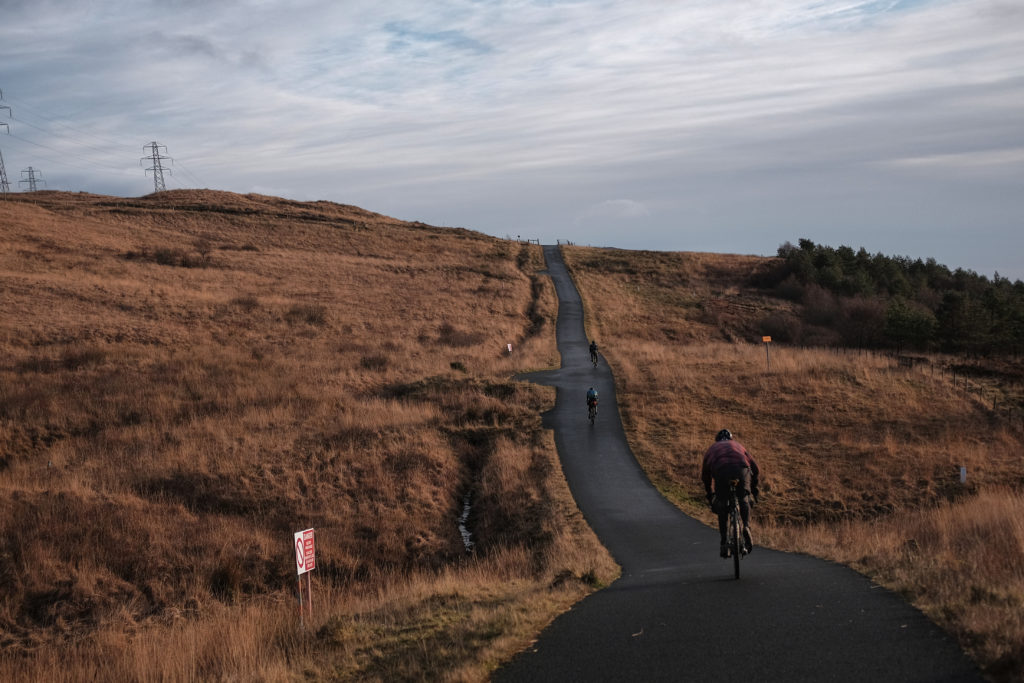 The tarmac is only there to link up sections of the G-stuff.

Check out the route on Komoot

Check out the Mountain Bothy Association website for details on Mark Cottage and other bothy locations.

Markus Stitz has details of great routes on the Bikepacking Scotland website: bikepackingscotland.com

Here’s to many more adventures to come. It’s never too early to start planning! 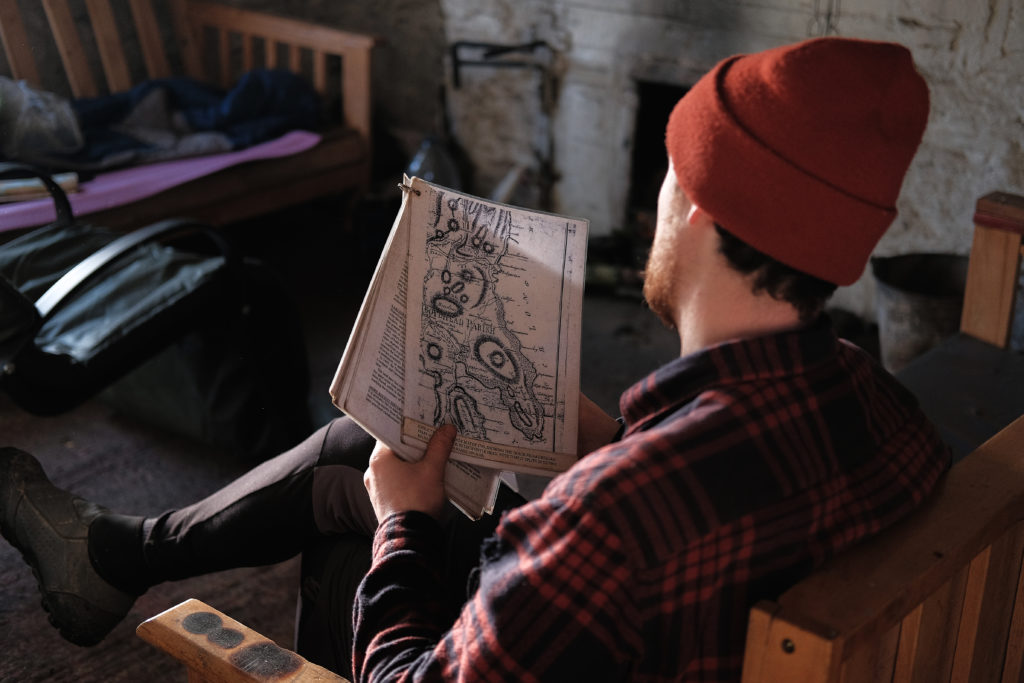 Thoughts turn to the next adventure…

All photos by Doug Somerville.