Kit for Kids: The Pros are giving back! 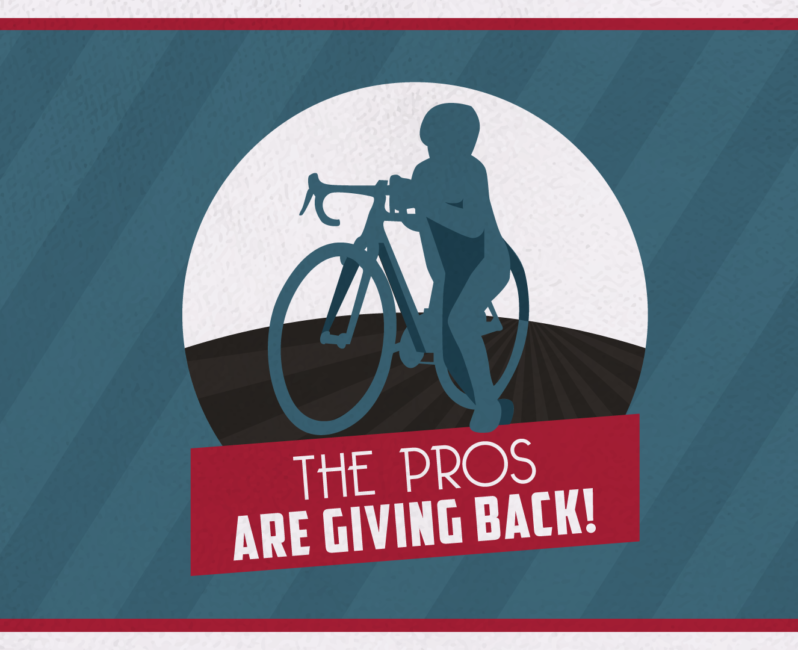 Gosse van der Meer needs little introduction. This larger than life character has won fans the world over not just for his amazing ability on a cyclocross bike, but also for his character. He’s bursting with it. Gosse is a pro rider sponsored by Bombtrack Bicycles, Hunt, Lezyne, Challenge and Ritchey. He has it made. But back when he was a starting out, it wasn‘t easy for young Gosse to get hold of cycling kit. It’s expensive and in cyclocross, you need a lot of it!

Growing up in the scarcely populated area of Northern Friesa (Netherlands), trying to get his hands on suitable cycle clothing was tough. Gosse had to stick to wearing the same one or two jerseys throughout summer and winter… Now Gosse van der Meer is a pro, he’s drowning in clothes. And so are many others on the pro cyclocross circuit.

Little Shredders: the Pros are giving back!

Gosse wants to help children aged 10 to 14 years of age get the clothing they need to give them a step up in the world of cyclocross. And to set up this fantastic campaign, he called on his racing colleagues to donate their former clothing they mostly only wore a few times before it was cast aside. The pro world can be a wasteful place – sponsors change, riders switch teams and then it is of no use. Until now! We’ll let Gosse explain…

Gosse worked a little of his charm on teams and sponsors and he even got kid’s national team jerseys and other collector‘s items to share with those eligible. AND IT’S ALL FOR FREE!

Support your cycling youth, don’t let them freeze during winter, let them look and feel good, and save money. At the same time, this is the perfect way to support sustainability, reduce clothing-production and cut down on energy consumption!

What do you have to do?

To apply for Kit for Kids, just fill in the form below to be in with a chance of winning a clothing support package:

Open
Tour de Self Isolation. Keeping it short, local an

Tour de Self Isolation. Keeping it short, local and at a distance on this Bombtrack Hook EXT custom build. When you’re stuck indoors, tinkering with bikes is inevitable! ...

Join @panniercc & @brothercycles this evening 19:30GMT. Alone, yet altogether! (link in our profile) ...

As tempting as it feels to head for the hills and go off-grid at a remote hideaway, now is not that time. Adventures can wait, the trails will still be waiting for us after our temporary hibernation. Stay safe everyone! ...

Open
A ride of contemplation and isolation. The head sa

A ride of contemplation and isolation. The head said @gozwift but the heart said @bombtrackbicycleco ...

Open
It’s oh so quiet... But the trails are dry and e

It’s oh so quiet... But the trails are dry and even the sun occasionally pops out to say hi. We don’t know if or when the U.K. will go into lockdown but until then, keep on riding! ...

Open
A brief escape from the chaos. Find the time to ge

A brief escape from the chaos. Find the time to get the fresh air and take a while to enjoy the calm. ...

Open
This is Tom. Tom is clocking up some social distan

This is Tom. Tom is clocking up some social distance on isolated gravel trails. He’s also having a rad time. #bemoretom ...

Reminiscing of more innocent times and friendships forged through our passion for riding. We wish all our friends and followers stay safe and look forward to riding together again soon. ...

Open
Sun, sand and getting overtaken by donkeys... Foll

Open
Loaded up for a weekend of self isolation. . . #bi

Open
Tripping the gravel fantastic! Emma and her trusty

Tripping the gravel fantastic! Emma and her trusty Tripster ATR V3 have been scouting Lanzarote for the best gravel roads and trails the island has to offer. ...

Open
Our gravel buddy Dan from Cadence Images has been