Into the storm: Black Mountain overnighter 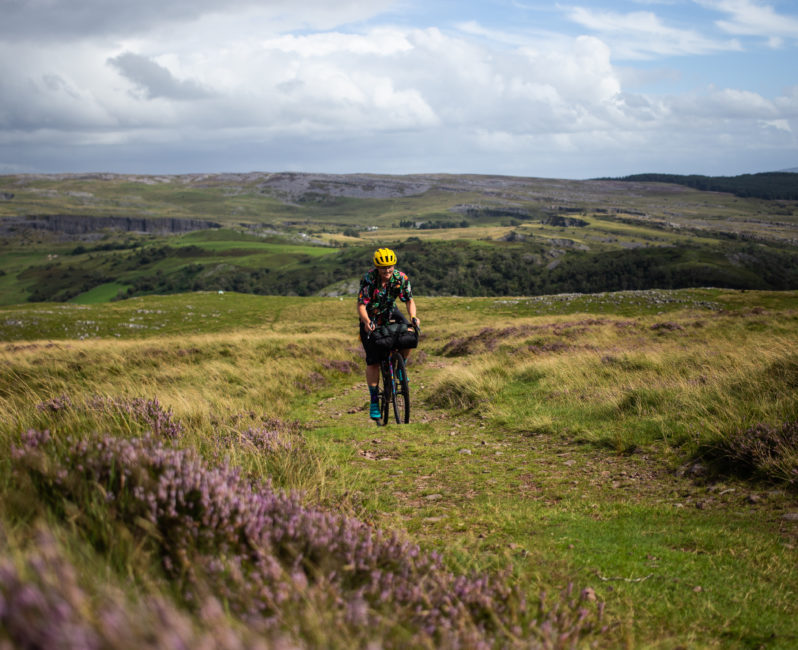 The icy rain blew up the pass, driving into our exposed cheeks like stinging needles as we pedalled down off the Brecon Beacons from Bwlch Cerrig Duon. Still mentally on edge from the extreme conditions at the top where I was forced to dismount the bike for fear of being blown over the edge, the effort to get down this mountain pass seemed a world away from the blissful summer climb by the river I’d experienced a few seasons before.

Bikepacking in the British summertime should always be taken with a little caution. Although we’re lucky to get some beautiful weather during prime touring season, what we don’t really get is predictability. Glorious one day and a storm blowing in the next; if you don’t pack a waterproof, it will rain. Thanks for that, Chris.

We didn’t really know about Storm Ellen when a last minute plan was cobbled together with my pals Tudor and Callum. Thick as thieves, we’d bonded over bikepacking the Second City Divide last year, and had Glasgow to Cape Wrath planned for 2020. Alas, a two-dayer closer to home would have to do for now. Meeting at the tiny train station in Abderdare, Tudor had also brought Chris Lord, a Cardiff-based frame builder along for the ride. 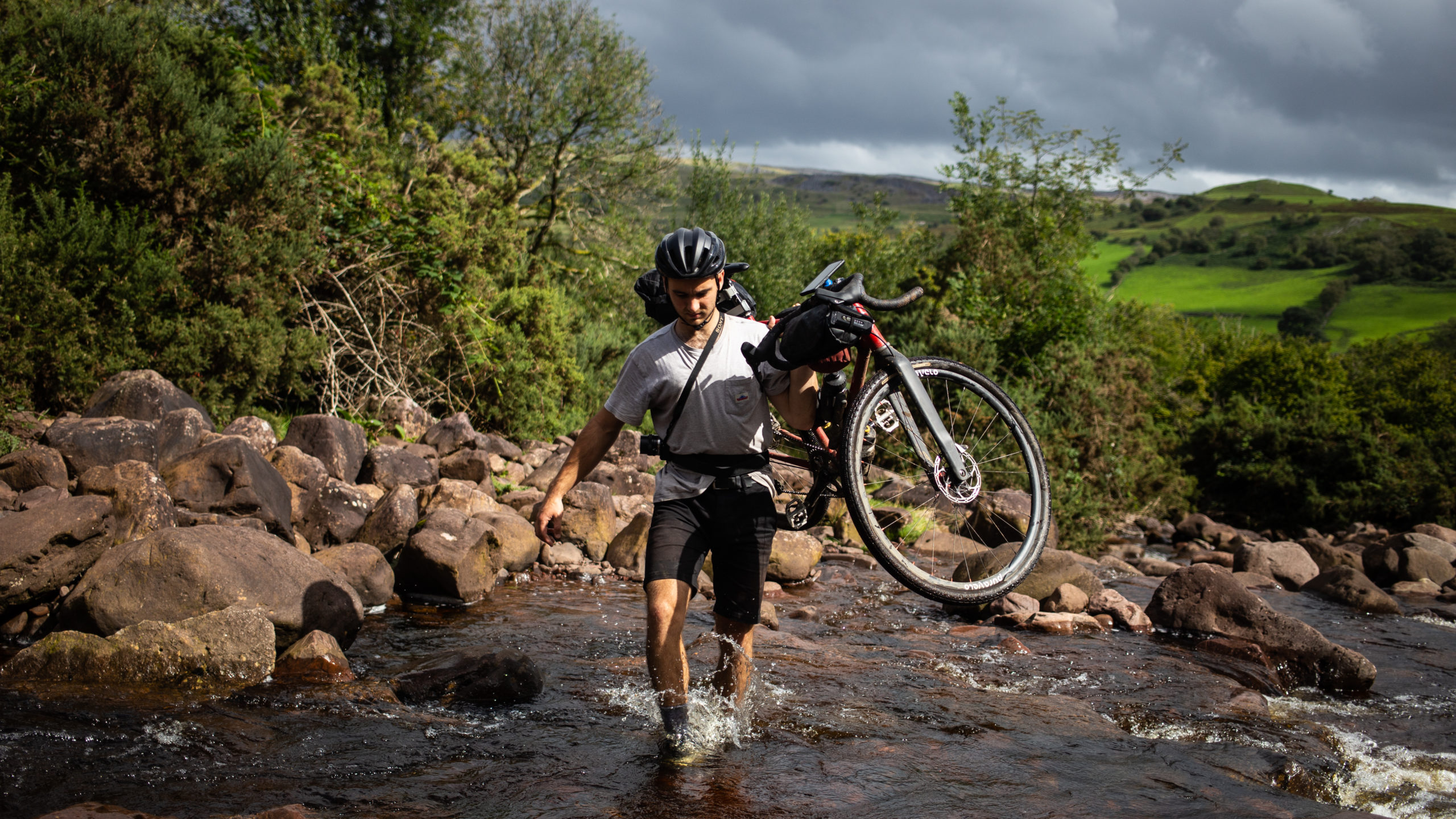 Chris Lord of Lord Cycles, Cardiff, with one of his steel frames. Apparently you don’t need a waterproof if you’re actually Welsh.

From a leisurely ‘only 50 km‘ ride, the first day turned into a race against the incoming storm, with double-drop black rainclouds forecast for the late afternoon worsening to a full-blown lightening storm. One thing was for sure; we didn’t want to be caught out on the Black Mountain in the middle of nowhere when that came in. 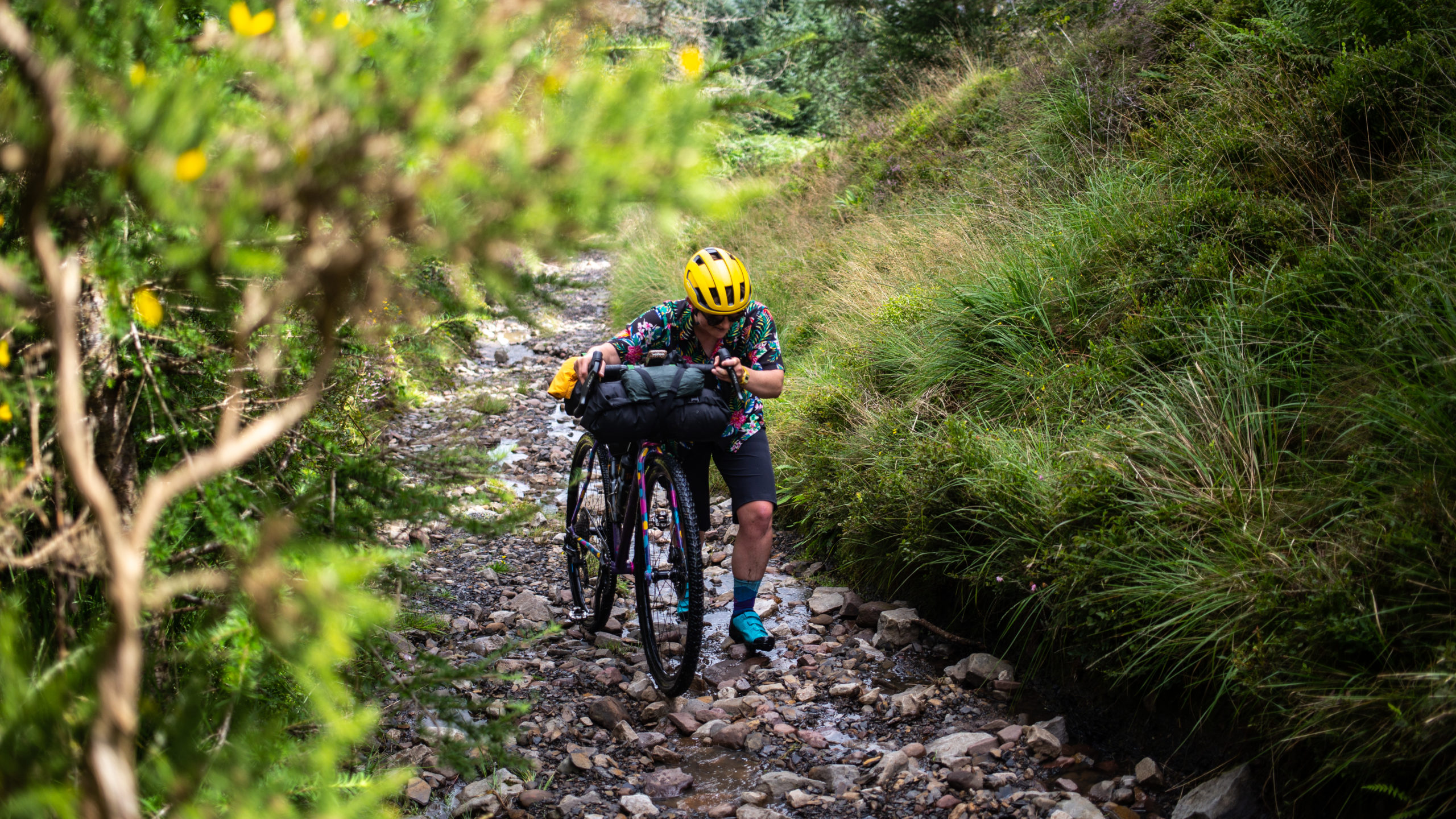 Although we started out on the roads at a fairly reasonable pace, our efforts were hankered by the rough ancient roads including Sarn Helen, exploring South Wales’ highest drop waterfall at Henrhyd Falls, and a pint and crisps for lunch in the local at Pen-y-cae. The final leg was a crossing of the Black Mountain from just past the Dan-yr-Ogof caves to Llyn y Fan Fach, via Llanddeusant. I’d been warned that this bridleway across the high moorland might cause a few issues by a local hiker, and he was not wrong. 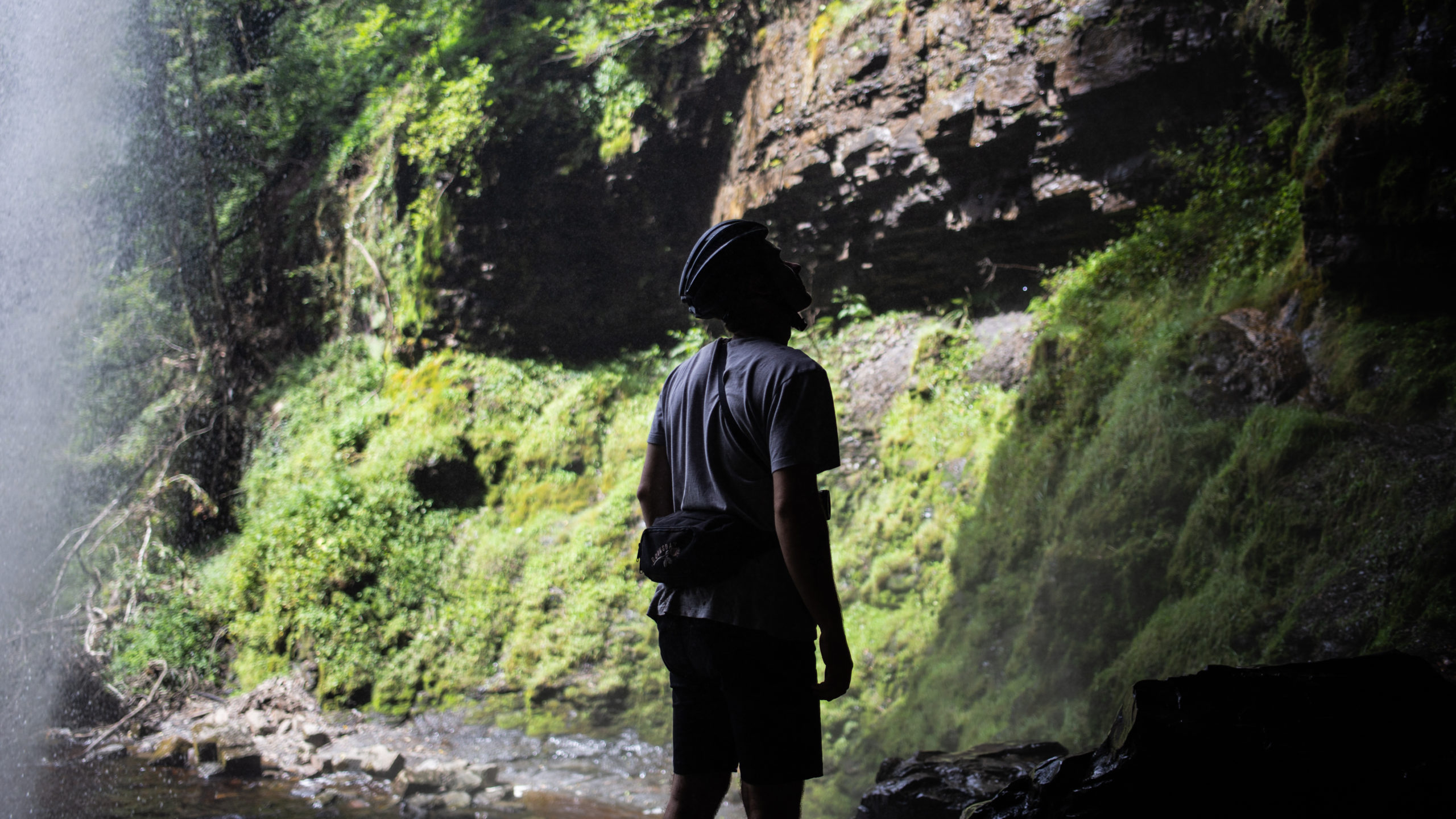 The steep hike-a-bike, or rather haul-a-bike, diversion down to walk behind Henrhyd Falls was well worth it

The route was put together by a good friend Cass Gilbert of Bikepacking.com, and had been on my wish list for a while. Knowing Cass, I did expect at least some hike-a-bike, so the ensuing three hour hike and scramble over boggy moorland, rocky trails and across streams came as no great surprise. Light rain started to blow in after the first couple of hours crossing this expansive, remote feeling landscape just a short distance from the densely populated valleys, and we didn’t see another soul. 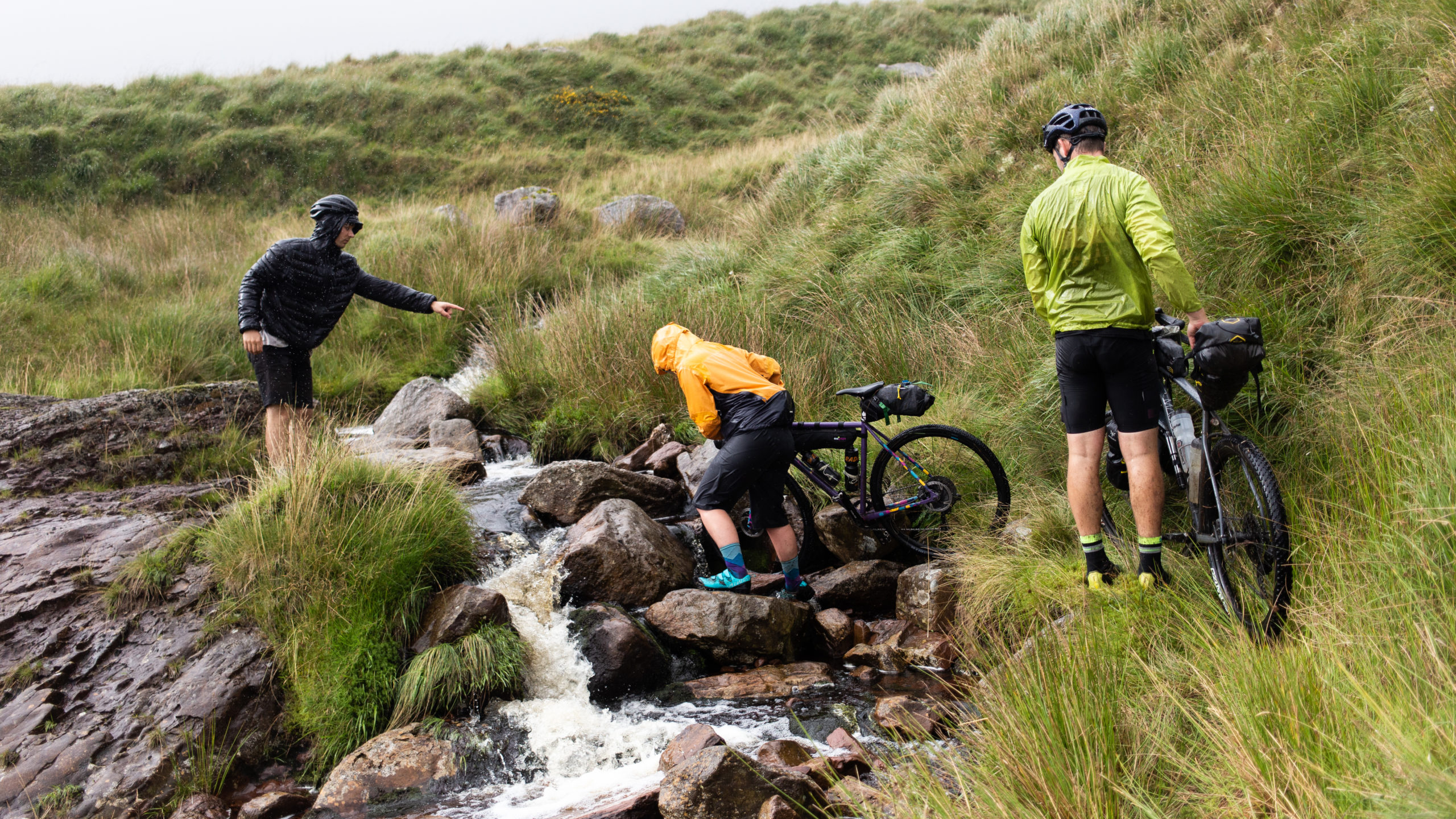 Our initial plan to wild camp on the shores of the high Lyn y Fan Fach were dashed; it didn’t seem like a good idea to head up the mountainside with lightening on the way, and I certainly didn’t want to be that guy calling out mountain rescue, now more than ever. Our luck turned when we not only found The Wildman Woods, a wonderful semi-wild campsite down in the valley where we could shelter from the worst of the storm overnight. Even better, the helpful woman in the nearby booked-out Youth Hostel who’d let us use her landline also agreed to sell us some craft beers to take to our camp. Result! 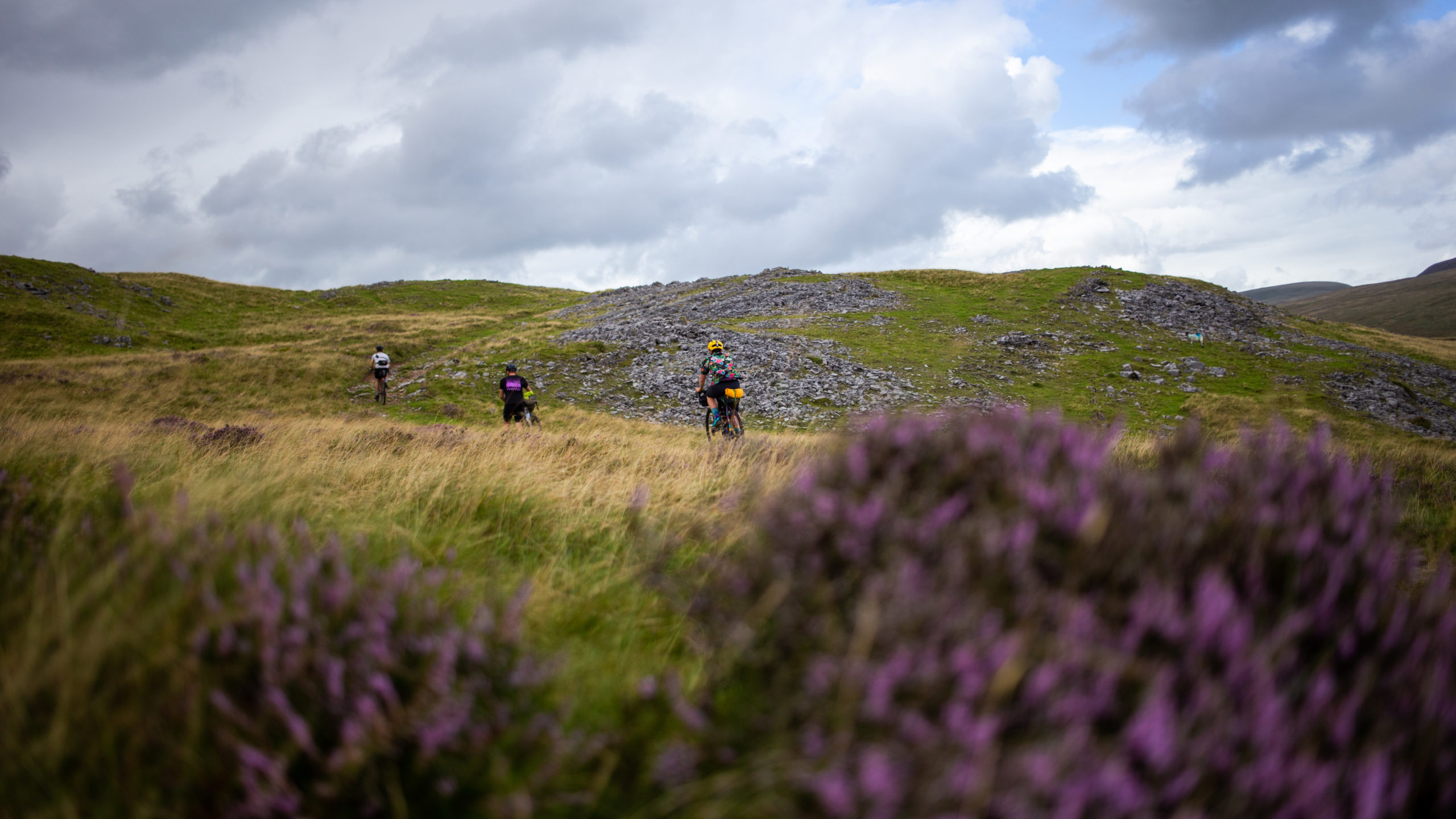 The weather might have been wild, but the views were still absolutely breathtaking

Although most of the rain had fallen in the night, with the four of us tucked up safe under two huge tarps strung up securely between the trees, there were still huge winds battering the open landscape on our second day. With the fear of hugely swollen rivers and unsafe high mountain passes, we rerouted the plan to stick to the roads for our return leg. Partly a disappointment to miss more great off-road tracks, but certainly the right decision on the day. 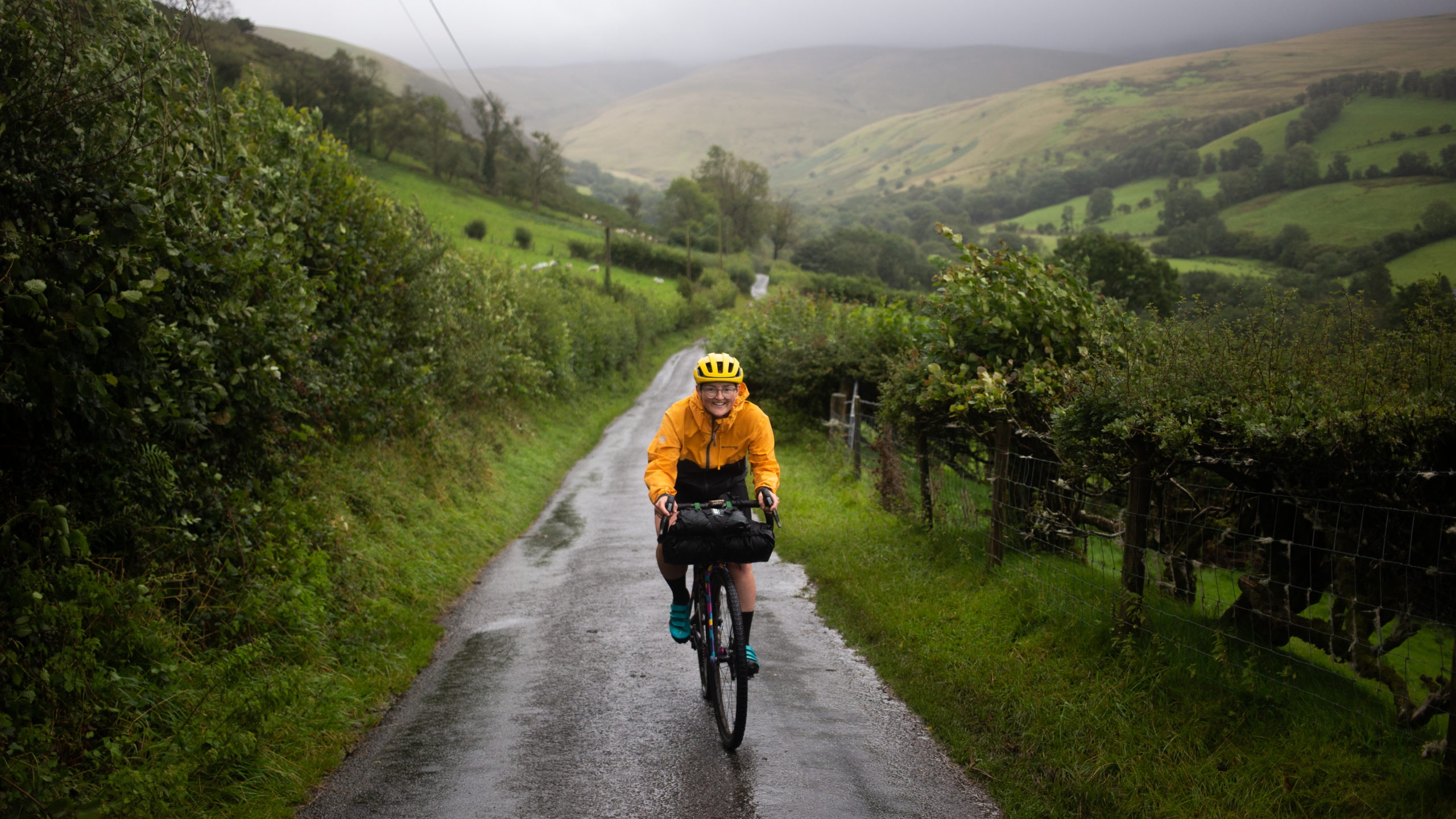 Riding into the storm on the second day was exhilarating

What ensued was perhaps one of the wildest experiences I’ve had on a bike, despite not being that far away from civilisation or lasting all that long. The almighty tailwind along the mountain road past Usk Reservoir had felt incredible, but led to a more terrifying descent of Bwlch Cerrig Duon, with winds so strong I had to dismount and push my bike for fear of being blown off the road. I’d dropped behind the guys by some margin as I dismounted to push my bike along the road in an effort to remain upright, the wind and by now driving rain unlike anything I’ve ridden in before. Actually quite terrifying, but life-affirming too, by the time we got down off the mountain safely.

From the mundane monotony of a summer stuck behind a desk in an incredibly safe and cushty environment, this was just what I’d needed. Sure, this wasn’t a trans-Scotland epic, but a bit of rough weather with some close friends certainly lifted my spirits in what’s been a pretty tough time for all of us.

Check out our full route on komoot here: