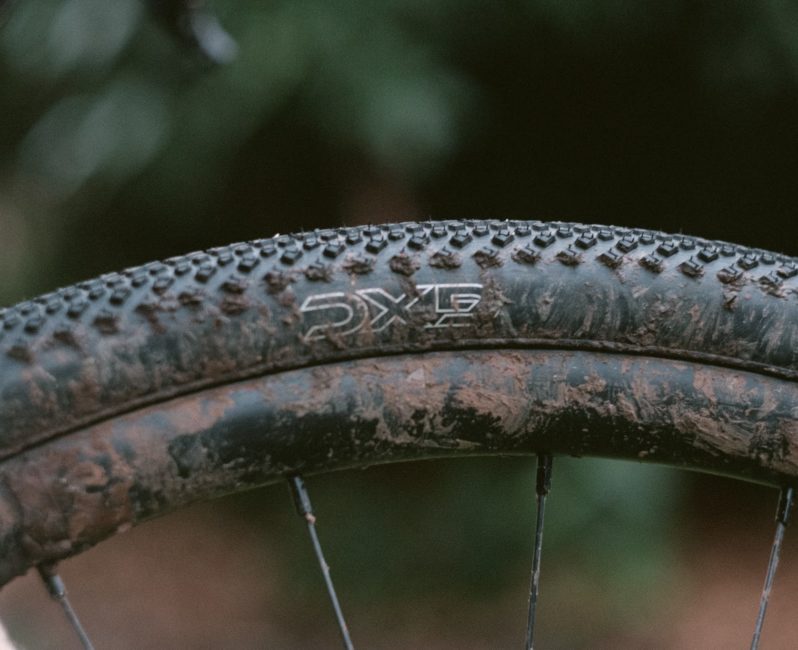 Recently released along with two other models in Halo Wheels’ gravel tyre line up, Will Jones has put the ‘aggressive and all-weather’  Halo GXC option to the test.

My aim when fitting a ‘gravel’ tyre is to find the minimum I can get away with in terms of tread for the given conditions. I don’t mind sacrificing a little in terms of grip for a tyre that functions well enough on the inevitable tarmac sections between what passes for gravel here in the UK. In summer this is usually something like the Challenge Gravel Grinder, but as the days get shorter and the rain gets more frequent, file treads cease to be functional, except as a means of providing mirth to mountain bikers as you walk through yet another off camber section in the woods.

These new GXC gravel tyres from Halo Wheels, on the face of it, seem like they’d fit the bill for a multi-surface, British-friendly tyre. Small diamond knobs closely spaced in the centre, gaining in height to the edge they appear as though they wouldn’t be unduly sluggish on the road, whilst having just enough bite to save any embarrassment in the slop. 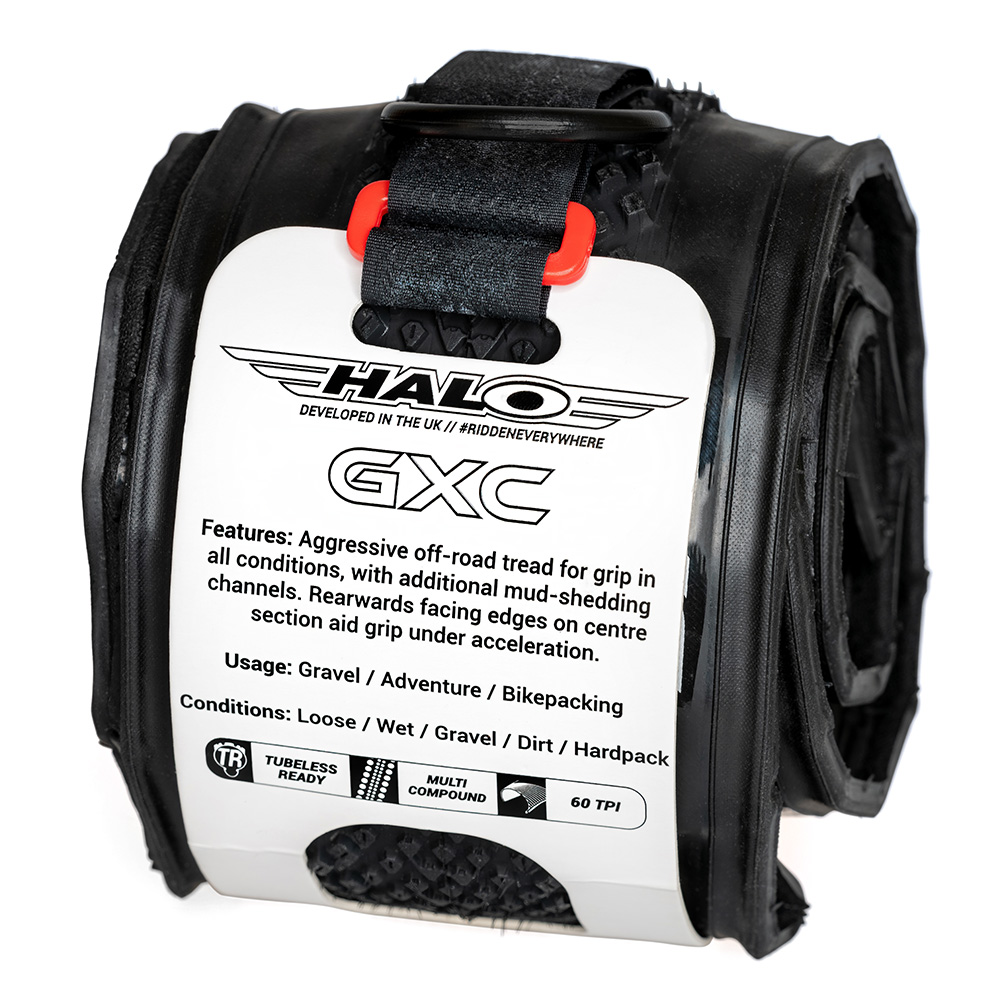 The packaging is also pleasing. I really appreciate the fact they don’t come presented in a cardboard box that’ll just end up in the recycling bin, but instead come wrapped in a reusable strap (presumably to appeal to those of us who cannot pack light and forever find ourselves strapping flip flops/another tarp/firewood to our bikes after exceeding the capacity of our minimalist bikepacking bags).

Before I get into how they ride, I really need to touch on fitting. I don’t run tubeless, so I can’t speak for how well they set up in that regard; I’ve not got round to drinking that particular kool-aid just yet. Given that I have tubeless ready rims and tyres this is a bit like watching VHS reruns of Only Fools and Horses on a 4k HD TV, but that’s another discussion for another time. 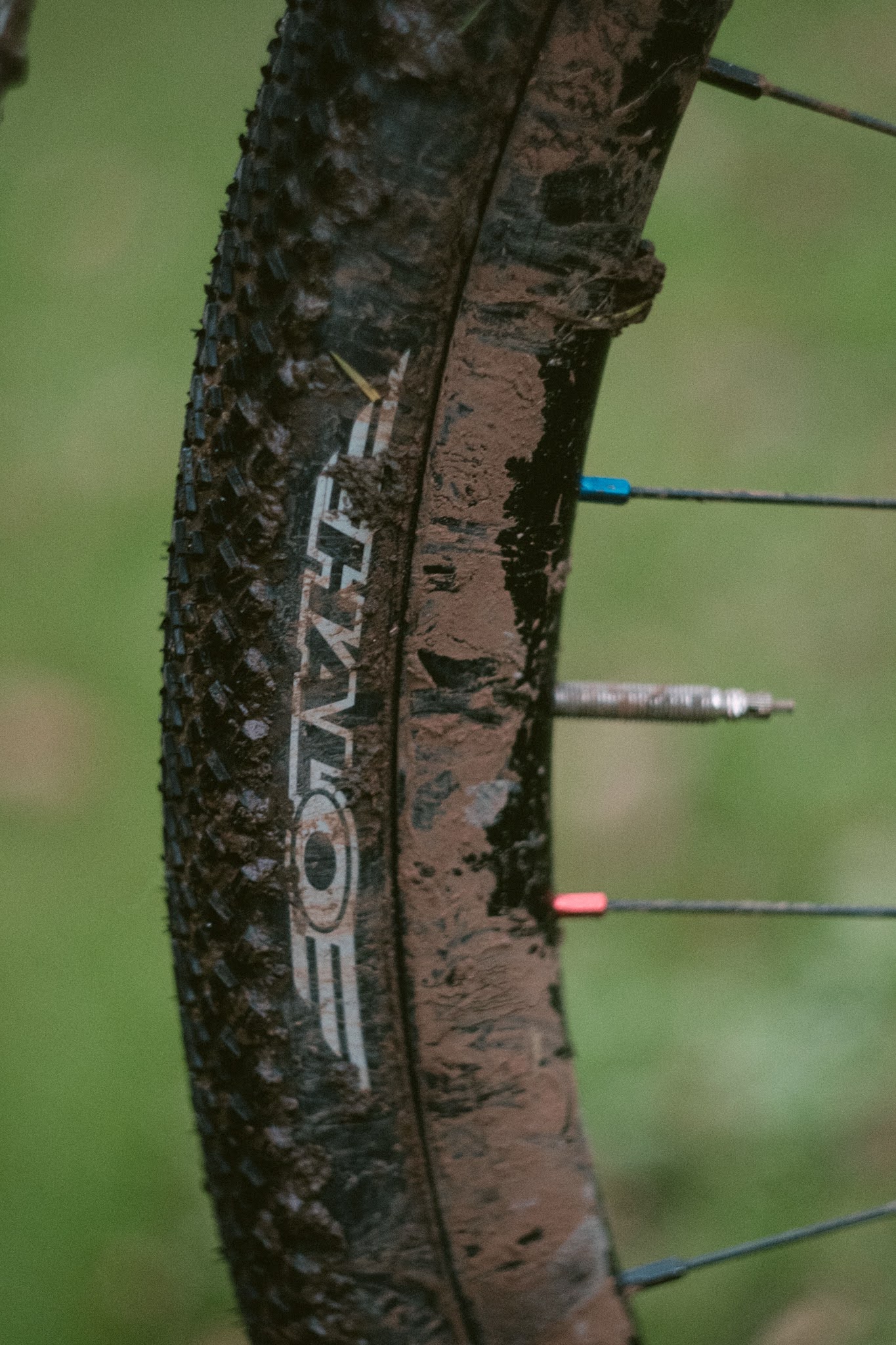 Not the dream tyre/rim combo?

I’ve fitted a lot of tyres in my time, and the previous ‘most difficult tyre’ award was previously a lovely set of Challenge Limus Open Tubulars. These have stolen their crown, though I do appreciate that some tyre/rim combos just don’t play nicely together. For reference I have 700c DT Swiss G540 rims, one snapped tyre lever, cramp in both my hands and an antisocial level of perspiration. Your mileage may vary.

Once I finally got them on, they plump up delightfully to just shy of 39.5 mm (with a wide 24 mm internal rim), with a nice round profile you’d expect from a modern tyre. They’re also available in a 650b x 47 mm option. The GXC gravel tyres look good too, aesthetically similar to wrapping rattlesnakes round your rims (but marginally easier), especially if you opt for the oh-so-fashionable tan wall option.

My only criticism, and it’s entirely superficial, is that I like my tyre logos to be right way up at the top, rather than the bottom. If you’ve got Halo rims however, like the Halo Vapour GXC 29 wheelset, then the logo orientation makes a lot more sense.

A second opinion on set up

ADVNTR Editor, Katherine, trialled the Halo GXC tyres on a set of 700c Shimano GRX gravel wheels with a 21 mm internal diameter. On these rims, they went on absolutely fine, and pumped up tubeless with a standard track pump. They did deflate after the first night, but that’s pretty normal with tubeless set up, and were fine after the first few days. 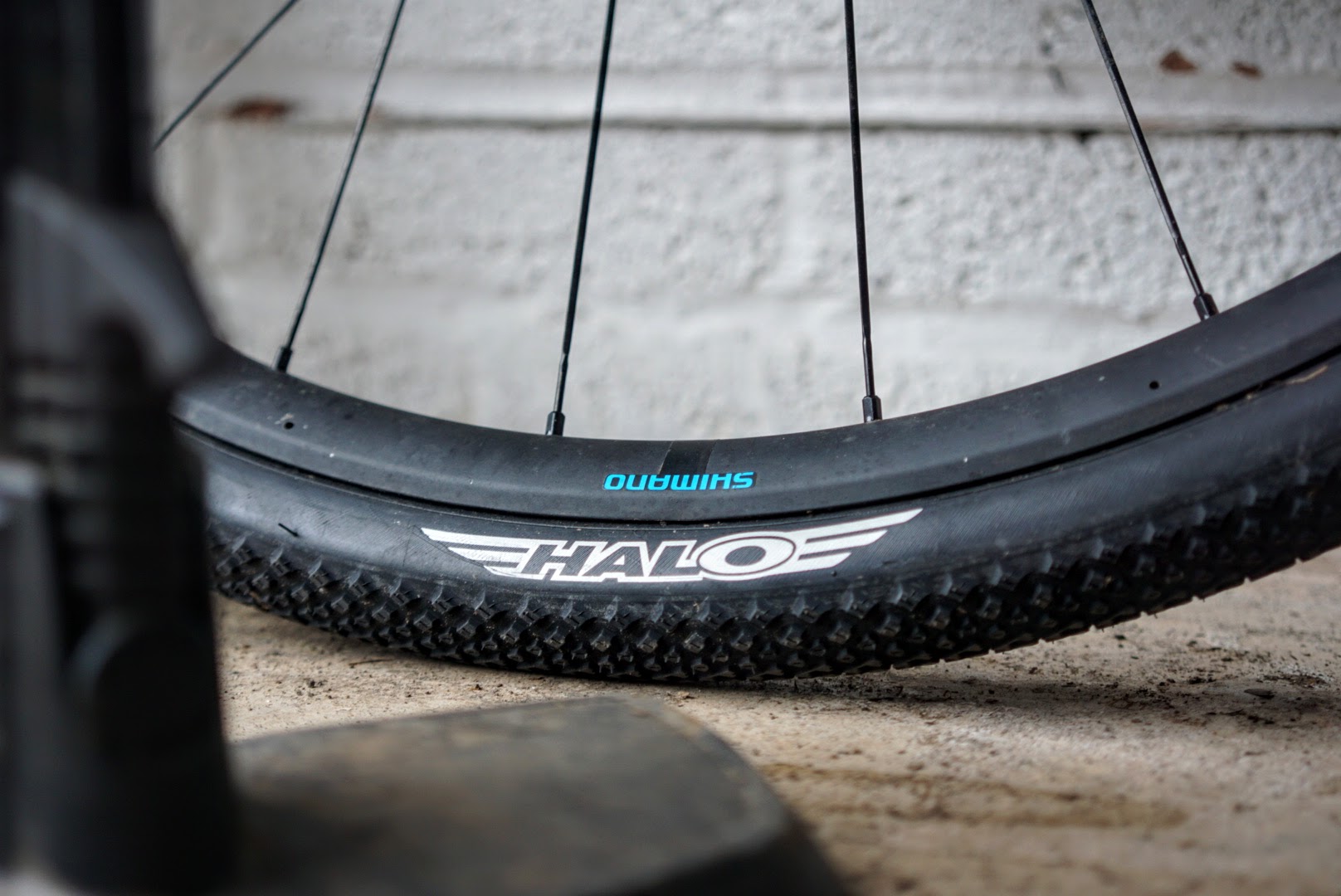 The tyres went onto Shimano GRX rims set up tubeless with no problems.

On these 21 mm internal rim diameter GRX gravel wheels (the same internal as Halo’s Vapour GXC 700c wheels), they do come almost bang on, measuring just over 37.4 mm at the widest point. Of course, bear in mind that this width will vary based on what rims you’re using. 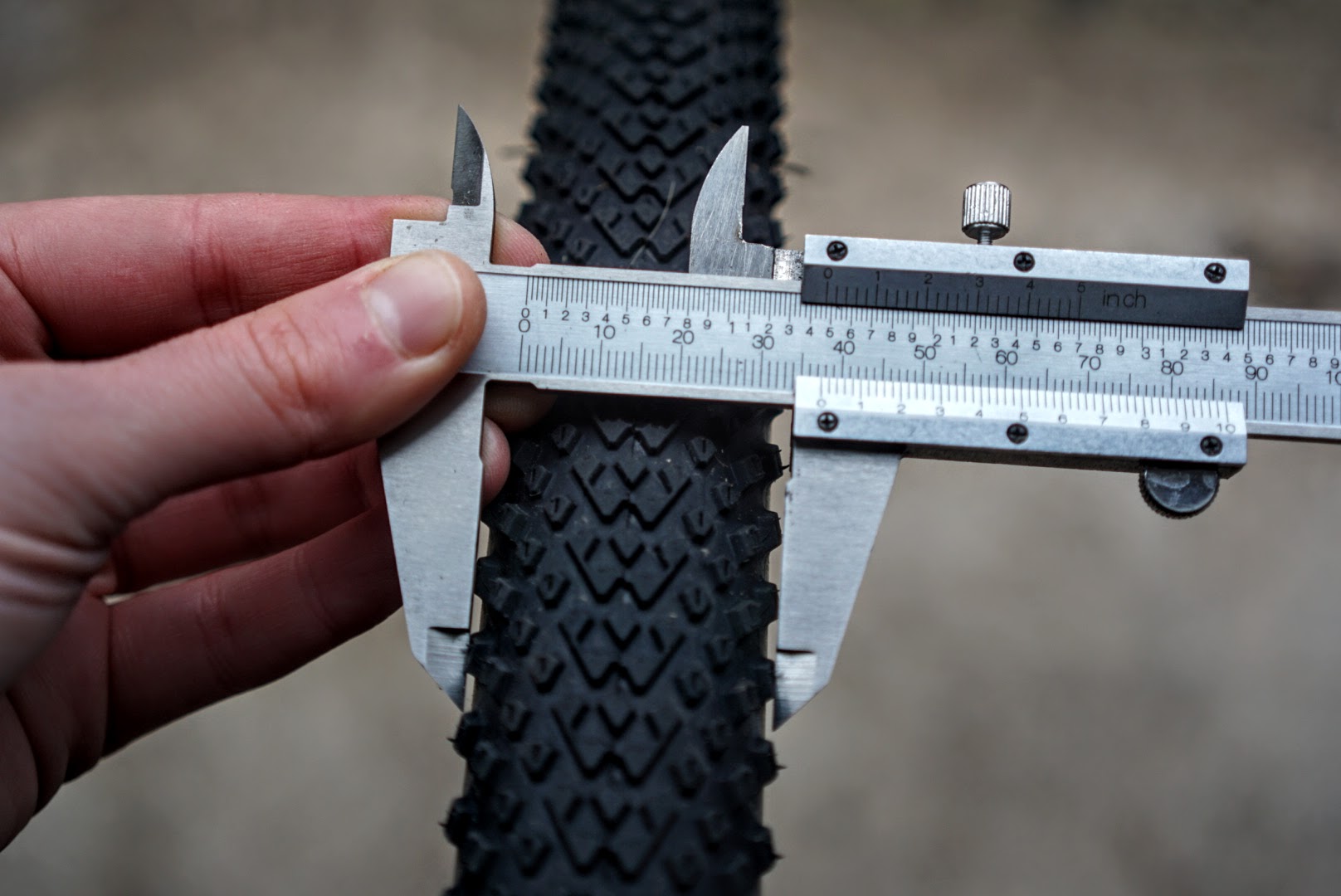 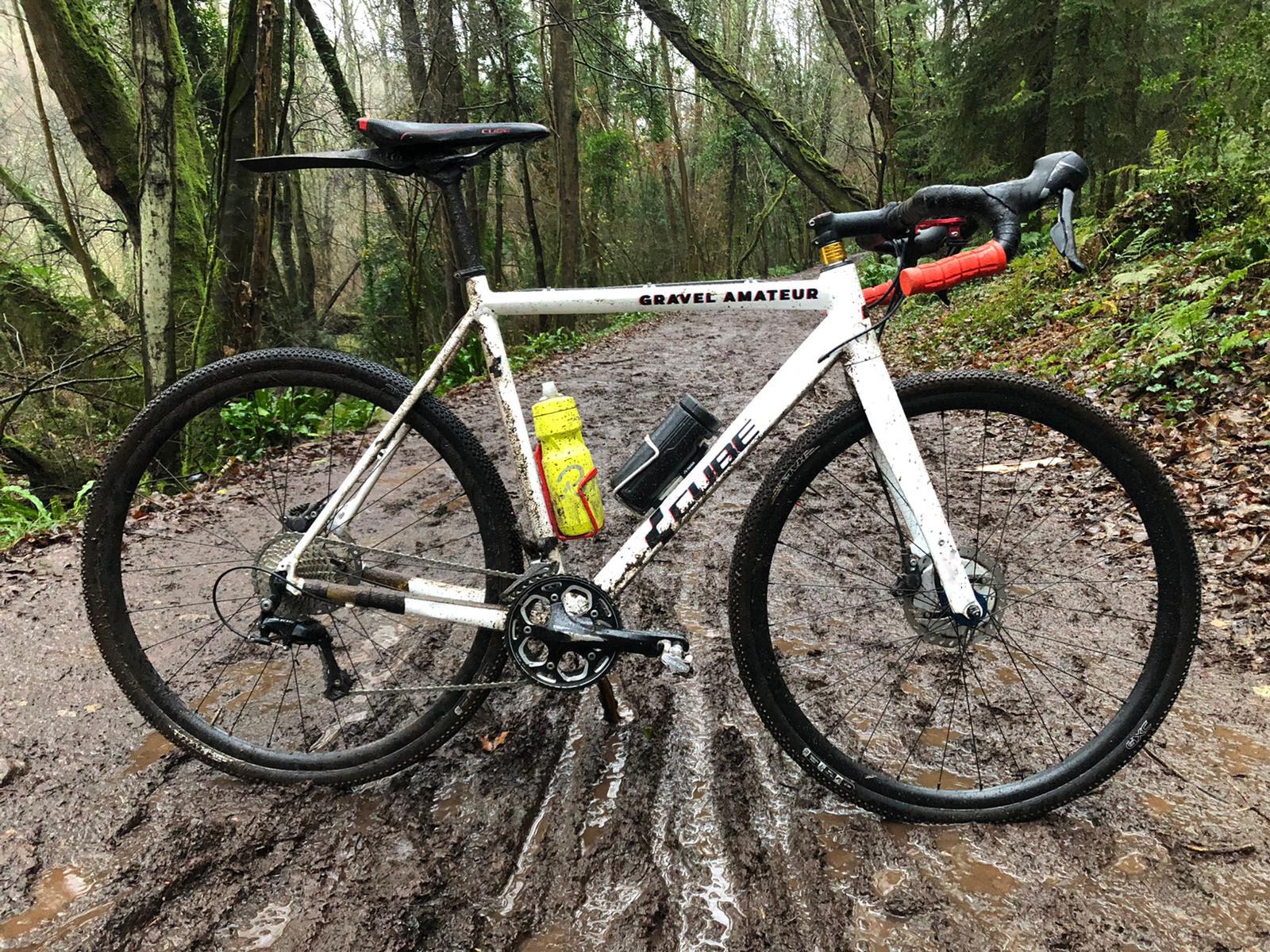 Fitted to Will’s #deepcustom Cube CX bike, the GXC’s had a thorough test in the British slop

On tarmac they were genuinely surprising. The Halo GXC gravel tyres hold their speed very well indeed and are mercifully quiet. You can live out your motocross fantasies and lean the bike right over without fretting about potholes, broken tarmac or that tricky patch of moss on the exit of a corner. They do however have a rather bouncy ride feel. This may be a function of tyre pressure, though I was running them as low as I dare (and certainly low enough to hit my rim a few times on rocks and roots).

While I applaud Halo for not joining the supple arms race by offering these as a race-ready 8000tpi carcass with all the structural integrity of crepe paper, I think they would benefit from a more conformable but still durable 120 tpi casing. It wouldn’t end up feeling soupy and unresponsive as some ultra-supple tyres can on tarmac, but would iron out some more of the bumps, and improve the grip off-road too. 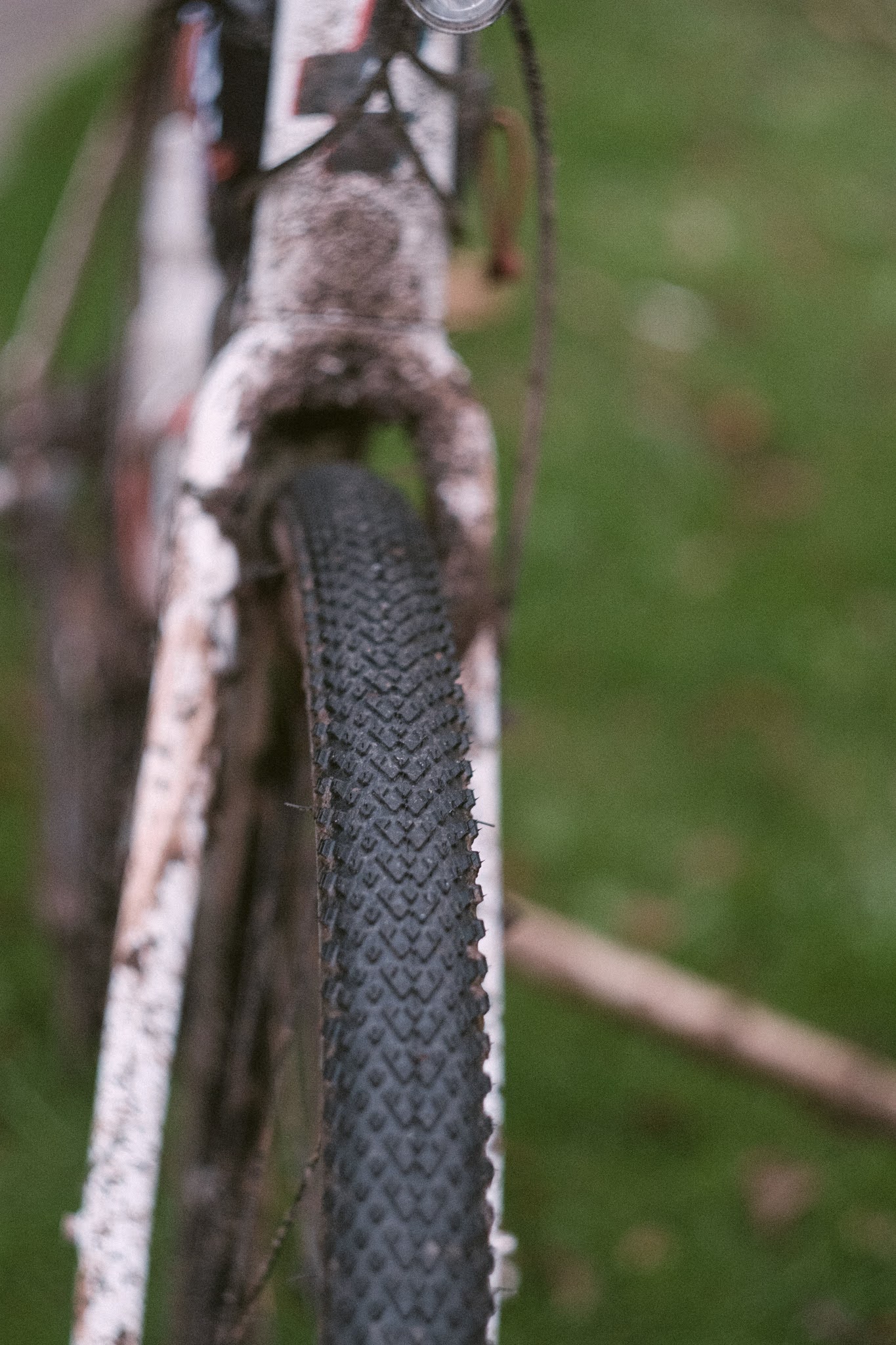 On wide 24 mm internal rims, the claimed 38 mm wide tyre was a little over

When it comes to actual gravel, the kind you’re blessed with if you live somewhere beginning with ‘N’ and ending in ‘-ew Forest’, these are a very good tyre indeed. “All the grip”, the marketing shouts, with some justification.

For a winter gravel tyre, the Halo GXC are everything you’d want. Fast, but without becoming squirrely on loose surfaces. Enough to really throw yourself down some of the more manicured MTB trails with ease. The rear bites, providing ample traction even climbing out of the saddle, and you can trust the front to track as it should. Over wet rocks, when I expected to skate around like a duck landing on a frozen lake they behaved impeccably, a testament to whatever rubber compounds they’ve used. 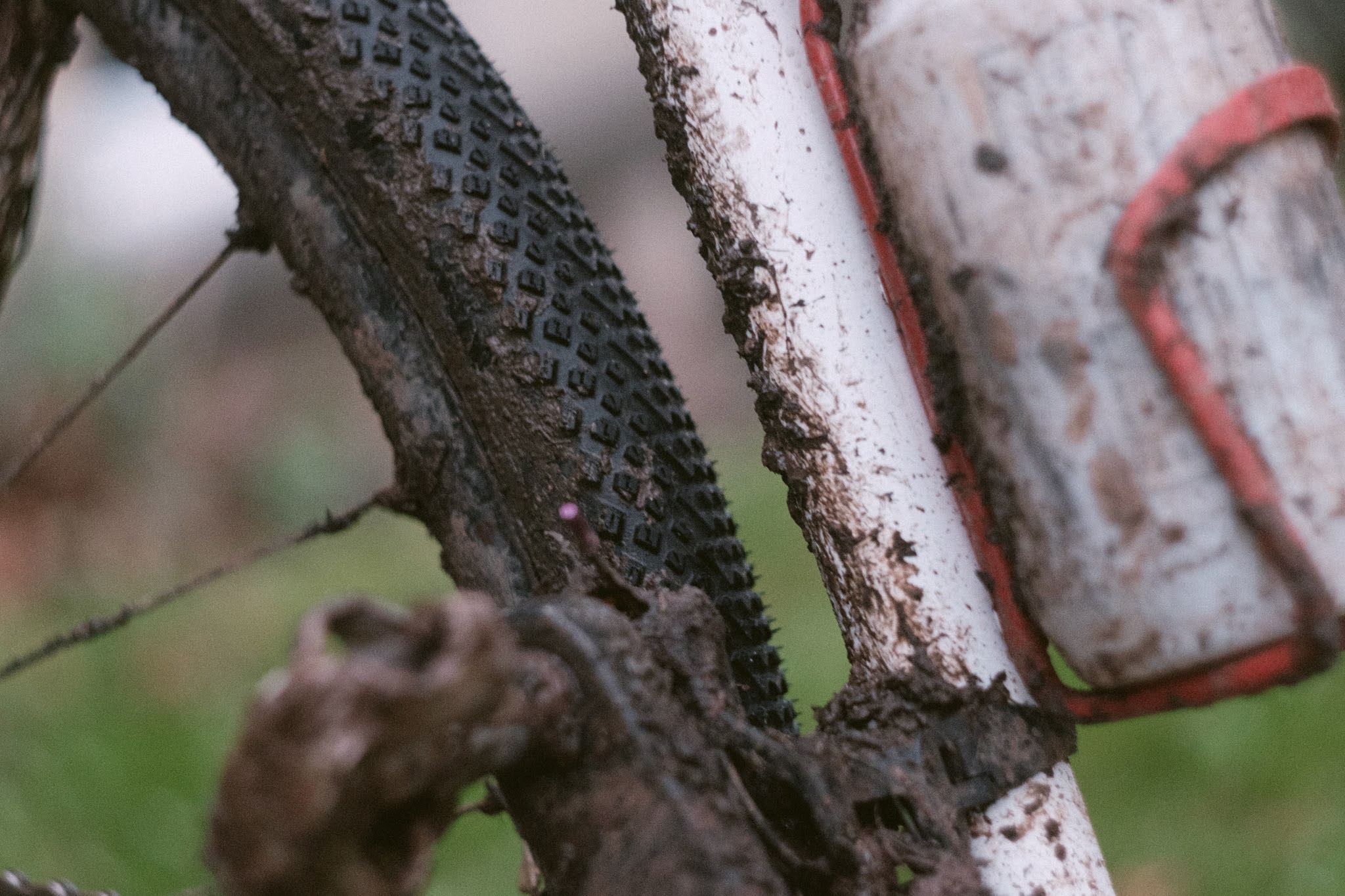 In summer I imagine you could happily swap the front for the GXR model and have an even faster setup if you are that way inclined, but as it’s December and has been raining for what feels like 18 years that’s another test for another time. My only hesitation in recommending them as an out-and-out race tyre is their casing, where again I think a higher TPI option would give a more pillowy ride feel over the chatter of gravel and ease the fatigue over big miles.

There seems to be a tendency to design gravel tyres for a mythical utopia, where there are miles of unbroken flint roads starting at your front door and extending into a dusty sunset over yonder hills. This is great if you live in Kansas, but in the UK the reality is that ‘gravel’ riding tends to encompass tarmac through to muddy slop, and I wanted to give these a tilt at every surface I could find.

Over clayey fields they cling on to the loam like a jealous lover, rapidly becoming slick (but we’d love to find a gravel tyre that doesn’t do this). This isn’t a great surprise as it also happens to 2.5” mud tyres, but the issue comes when you roll onto the next road section and they stubbornly refuse to jettison the muck unless you hit Warp 9 or find a convenient puddle to loosen the offending clag. This was no issue at all in the wet though, where they happily spray their cargo of mud about with glee. 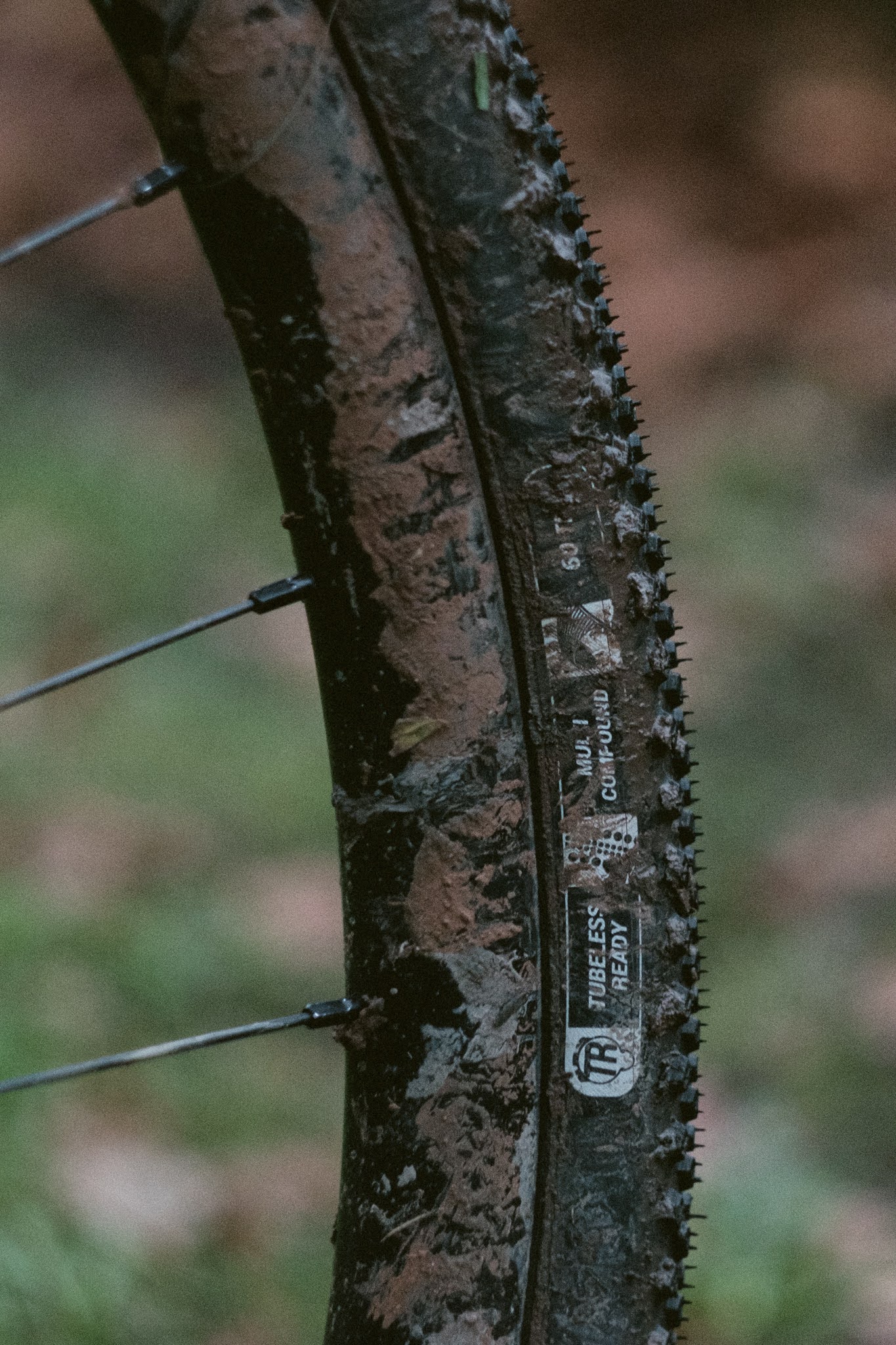 For pure mud conditions, consider swapping out the front tyre for something with more aggressive shoulder knobs

In really wet slop, they still give enough driving traction to get you up most climbs (especially if there’s a hard substrate beneath), but mud tyres they are not and you will get some wheelspin.  They’re not catastrophic by any sense, but the front wheel will go where it wants when the going gets slippery or greasy. I’ve a section of singletrack that I like to use as a test. It’s off-camber, leafy, with six inches of mud in places in winter. It’s categorically not ‘gravel cycling’, and especially up front these tyres did struggle (to the point I had an unscheduled lie down on a particularly technical section).

Even on flatter sections of a ride (canal towpaths I’m looking at you), where there is a depth of mud either in the centre or on the shoulder of the path, you will likely spend some of your time going sideways if you stray from the gravel ribbons. If you spend a lot of your time in the mud then I suggest you swap out the front for something with more aggressive shoulder knobs.

My initial impression of the Halo GXC gravel tyres was that they’d be just another gravel tyre that’s no good when the inevitable rain blows in from the southwest, but despite their shortcomings in the muddiest conditions, I’ve come to like them. If, like me, your ‘gravel’ riding takes in a wide variety of surfaces these tyres offer a compelling Jack of all trades, master of some option.

Think of it like going for a big hike: unless you’re spending all the time walking through a mire, you’d choose walking boots over wellies, even if you have a bit of bother taking the shortcut through the muddy field.  Fit and forget, they’ll stand you in good stead over most conditions most of the time, and for me that’s really what I’m after. 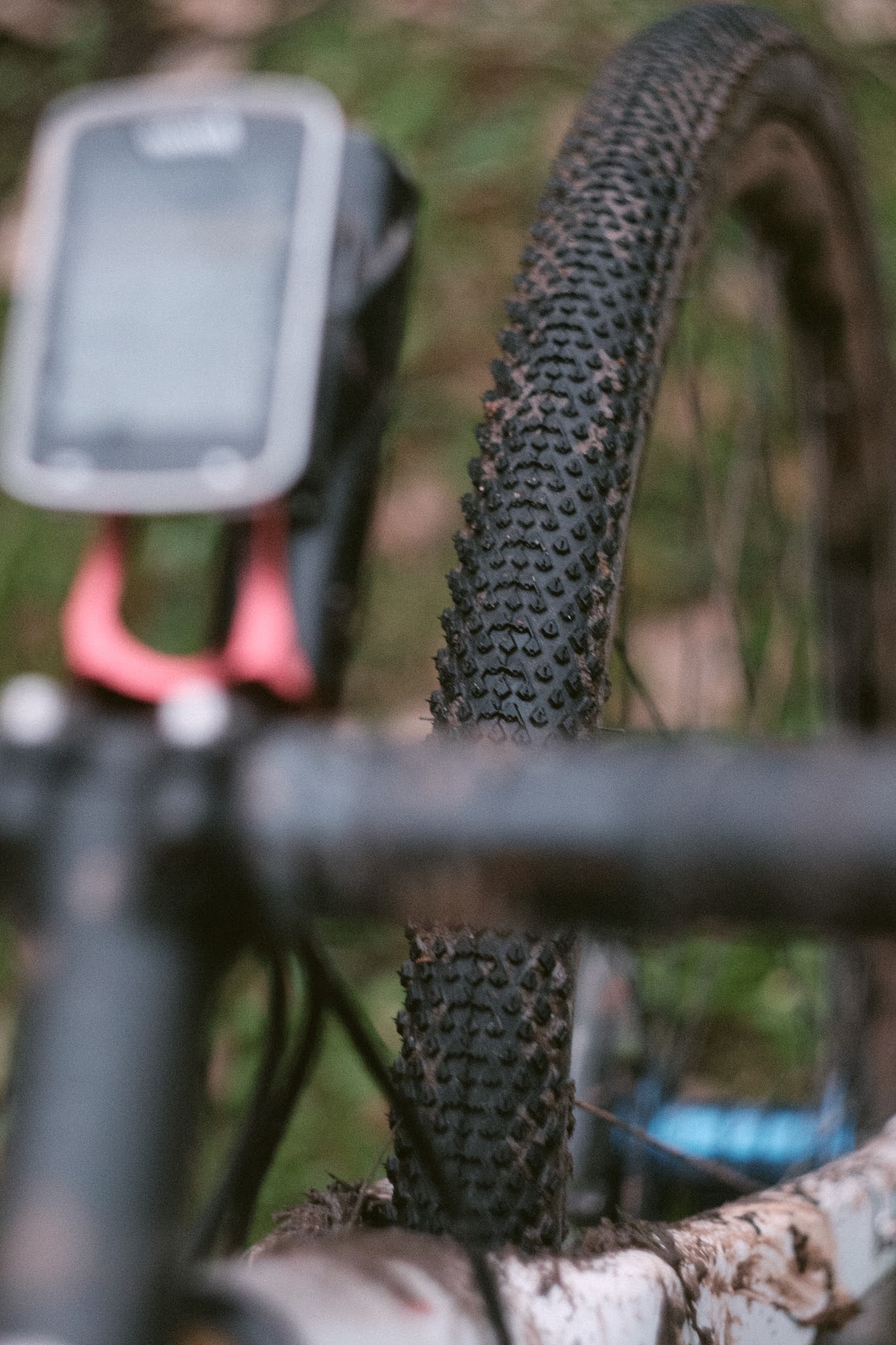 Check out more from Will Jones at Zetland Cycles and learn more about the full new Halo Wheels gravel tyre range here. 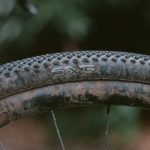 Check out more at Halo Wheels

I’ve just fitted 4 of these, I work at Cardiff Cycle Workshop (social enterprise), tubeless setup, one pair on Halo wheels – easily fitted and popped up on the beads no issues and the other pair on a set of Bontrager TLR rims, again easily fitted and popped up using a booster inflater. Ride wise, I took them on a mixed surface, proper tester, fast rolling tarmac on Taff Trail, slippery muck/mud, peaty mud, stony double track and Welsh gravel aka rubble and the rocky tracks in Llanwonno forest. I normally run Maxxis Ravagers 700×40 for more MTB-esq gravel adventures… Read more »