FKT on the Badger Divide 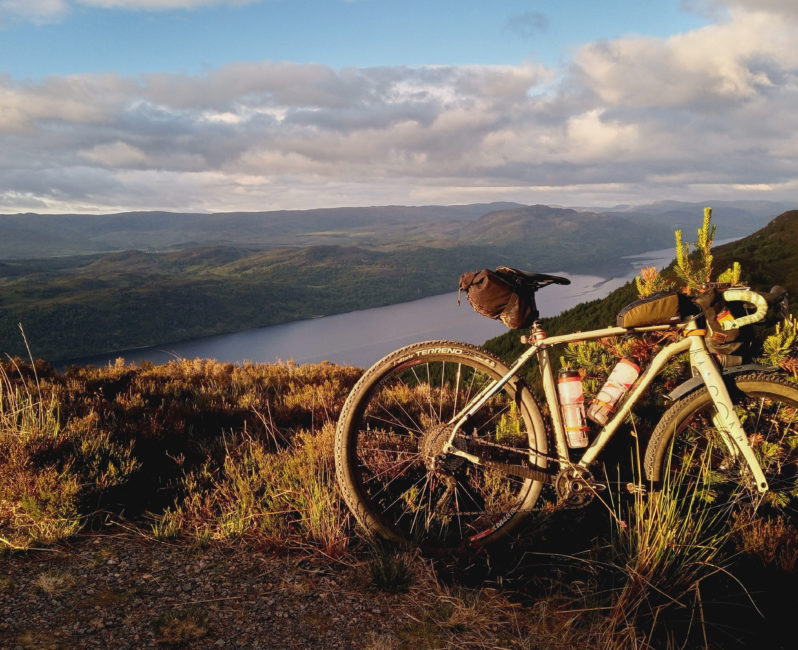 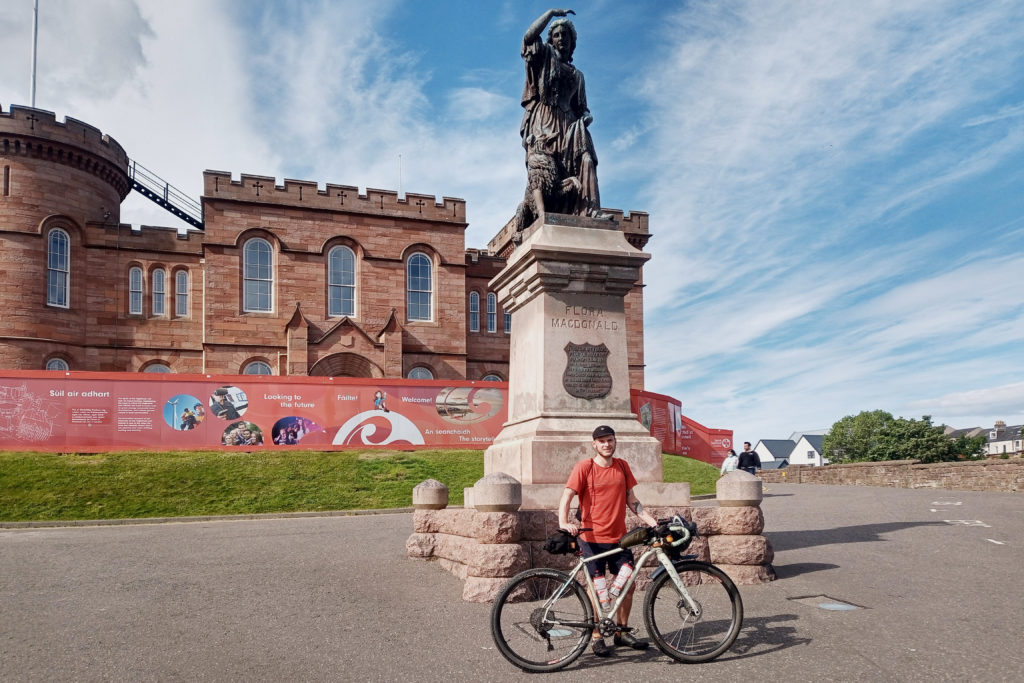 Marcus fresh faced and fresh legged at the official start point of the Badger Divide in Inverness.

Not more than a month following on from an incredible top 10 position on the Dales Divide, Marcus Nicolson seemingly had the hunger for another bite of some long distance cycling this time taking on a route from Inverness to Glasgow. His goal, an FKT attempt on the 211 mile Badger Divide Route from North to South.

Last month I set out to ride the full Badger Divide route in under 24-hours. I opted to ride the route north to south, from Inverness to Glasgow which would provide a bit more headwind but would take me directly back to my home. The route is approximately 340km in length, is almost totally off-road and includes a hefty 5800m of climbing!

I took the train up to Inverness the night before my ride and caught up with a friend for pizza and beer at the highly recommended Black Isle brewery in the city centre.

I knew I was going to need plenty of fuel to keep me sustained throughout the ride, as I didn’t want to risk bonking. I mostly stocked up on flapjacks, fruit and nuts. I brought along some helmet lights to go along with my front dynamo set-up but I knew I’d have long daylight hours on my side. The mild weather just before the summer solstice meant that I didn’t need to pack too many warm layers. I brought all the necessary tools and spares to fix punctures and mechanicals although thankfully I didn’t suffer any setbacks there! 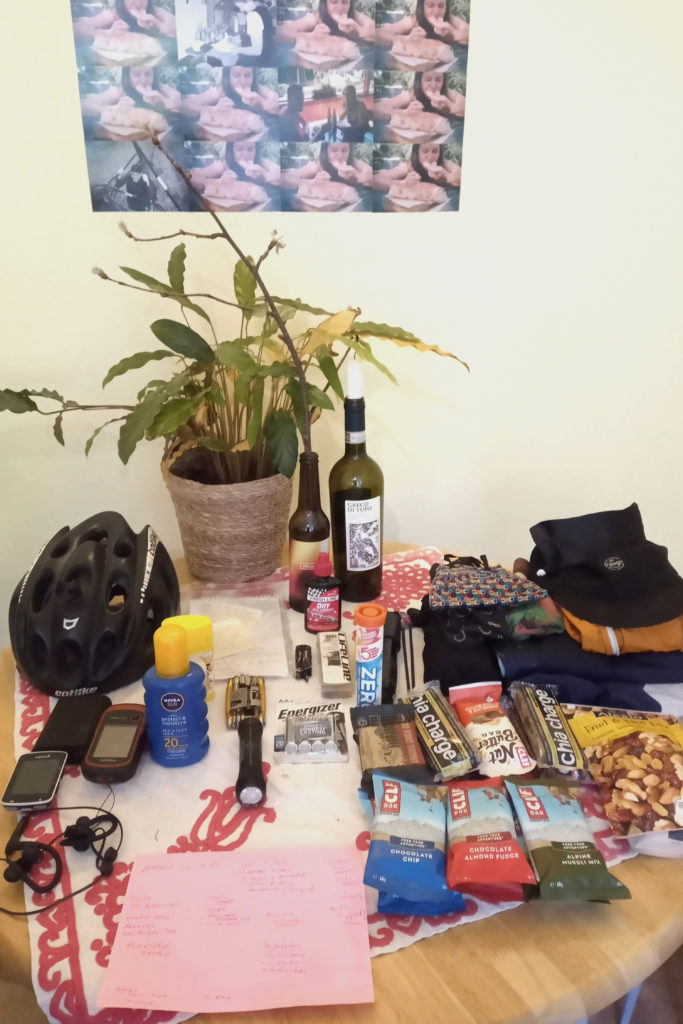 Snack and Supplies – a key factor in any FKT, we are advised that the wine and potted plant were not included in the effort.

The day of the ride I set out in the middle of the night after a few hours’ sleep. The route starts at Inverness Castle and follows the Caledonian Canal out of the city. Later, the Badger joins the Great Glen Way which skirts around the ridge and hills leading along Loch Ness. The views were absolutely stunning as the early morning sun started to light up the Loch below. There are plenty of ups and downs along this section and it’s a relief to finally hit Fort Augustus. However, there isn’t a lot of chance to recover as the mighty Corrieyairack pass is up next! 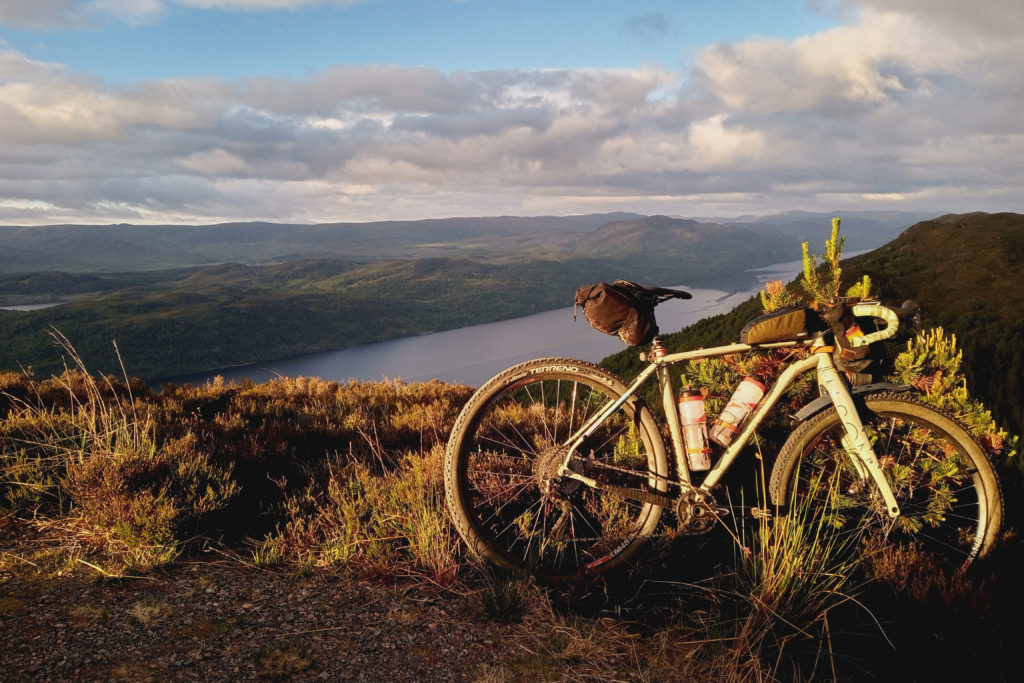 A beautiful bike and a beautiful view battling for attention above Loch Ness on the Great Glen Way.

The Corrieyairack is the longest gravel climb you are likely to come across in Scotland (or in the whole of the UK) and some of the sections really ramp up as you wind your way up the hill. The road was originally used by military troops on their way to stamp out the Jacobite uprisings in the 1700s! I don’t suppose the military of the time were conscious of what fantastic gravel riding they would be facilitating some 300 years later! On the way down the other side there are 18 switchback turns with water ladders and washed out loose gravel to watch out for!

Next up is a flatter road section leading east along to Laggan before the route heads south again towards Loch Ossian. While not crazy elevation here the wider gravel tracks are undulating and I could feel the headwind as I made my way south. I stopped at Corrour Station House for a much needed refuel and lunch. I was surprised to see many groups of mountain bikers at this stop. Corrour Station is on the Fort William train line and made famous by the legendary “it’s shite being Scottish…” Renton rant in Danny Boyle’s Trainspotting. The staff at the Station House were very accommodating and I would thoroughly recommend a stop-off here for anyone that finds themselves out in this lovely remote spot. In fact, the previous north to south Badger FKT was held by the brother of one of the restaurant staff! She was full of enthusiasm for my effort and served up my food in record time with the encouraging line: “you’re going to smash it!”

My energy levels were back up as I set off from Corrour and haphazardly slugged at my take away coffee while riding along the chunky gravel with one hand on the bars. Thankfully the hill walkers gave me a wide-berth as I passed by. A slight wrong turn on the Loch Ossian hostel had me backtracking slightly before I made it up over the hill and on towards Loch Rannoch. 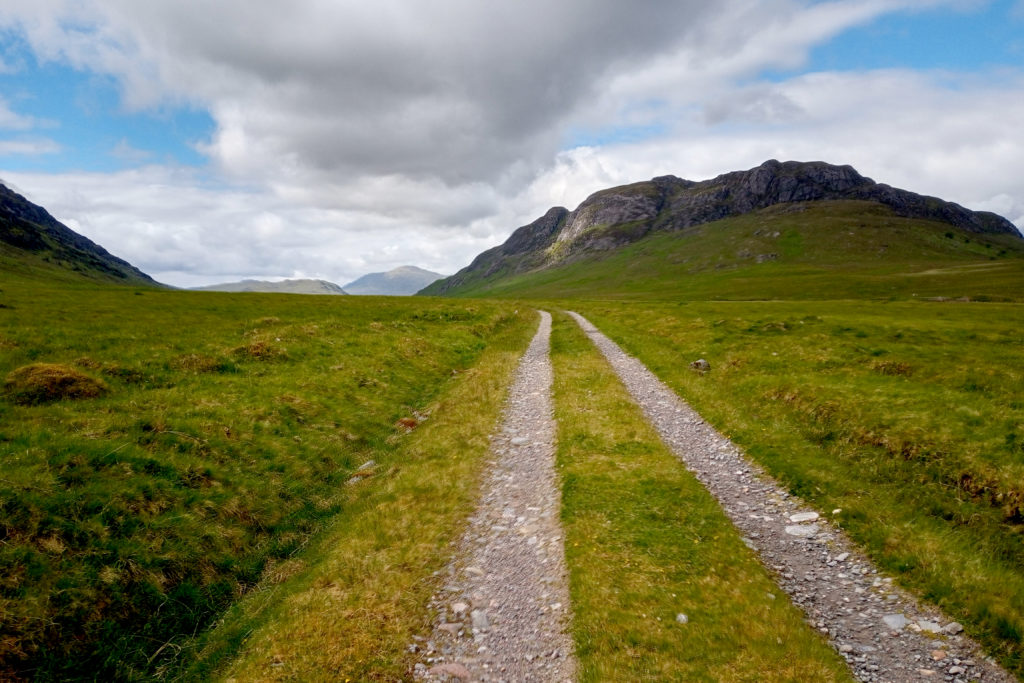 A beautiful stretch down to Corrour with the promise of a hearty lunch to follow.

I’d ridden the Racing Collective ScotDuro version of the Badger Route back in 2019 so thought I had a good grasp of the overall ride. However, the official Badger Divide route includes some notably tough additional sections which add difficulty to the ride. One of these is just south of Loch Rannoch where the route diverts from the road to do a loop of mixed surface single track and muddy heather (a section which features in the HT550) before reaching the loch again. I managed to keep up a reasonable pace through this section and scrambled up over the hill to rejoin the road at Glen Lyon.

The road section heading east along Glen Lyon was one of the most punishing sections of the day. The headwind here was relentless (as it often is in this glen) and I was making painfully slow progress as I crawled towards the Glen Lyon pass. Once heading south again I was able to get up to a slightly better speed and made my way towards the Co-op in Killin for a much needed refuel. Outside the Co-op I bumped into another cycling tourist (on a 3-geared bike with panniers) who was a bit baffled at why I was riding so far in one day: “what’s the rush?”. While contemplating this philosophical question I pushed my way up the hill track towards Lochearnhead. Again there are some tough sections here, particularly at Glen Ample, which is more of a steep walking track linking Loch Earn to Loch Lubnaig.

Once back at Loch Lubnaig I was closer to home turf and familiar with the route back to Glasgow. A climb through the forest over to Aberfoyle and a quick blast through Queen Elizabeth Forest led me back to the West Highland Way. The midges were eating me alive through this forest section! I had long thought that midges couldn’t attack a moving target! From Milngavie it was a downhill ride along the Kelvin river back  into Glasgow and to the finish of the route at Kelvingrove Art Gallery. 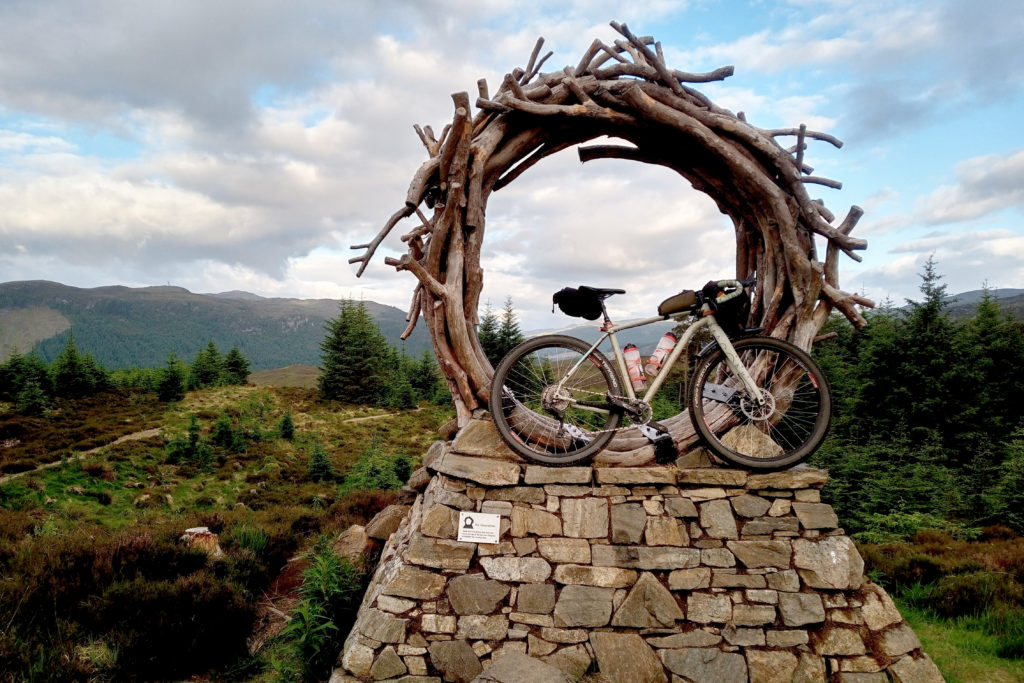 Talking of art, this incredible photo opportunity along the Badger Divide is a must.

My overall time on the route was 21 hours 5 mins, which I’ve been told is a considerable deduction on the previous record going south. The Badger is an amazing route and is a joy to ride at whatever pace you choose!

To see more of Marcus’ adventures follow him here : https://www.instagram.com/marcusnicolson/

And if this piece got you inspired to ride the Badger Divide for yourself get more info here : https://www.instagram.com/thebadgerdivide/