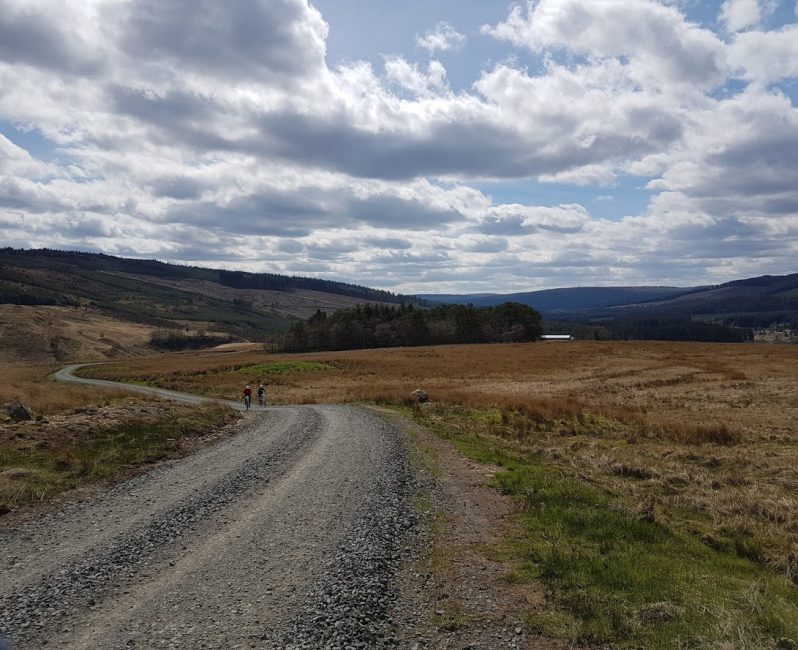 Keilder really is a long way away from Suffolk.

Going to sleep at midnight and then waking up at 4:00am to drive to an event really isn’t cool.

Riding on gravel descents on a bike, any bike, is seriously cool.

The 7:00 a.m. start was a shock to the system after so little sleep, but we didn’t seem to be the only bleary eyed people standing on the start line and with the temperature somewhere around freezing, we soon became quite alert.

Rider numbers were somewhere in the 700+ region, an eclectic mix of every rider type from XC racers, roadies, bike packers and weekend warriors. Fitness levels were everywhere from ‘Pro’ to ‘Olympic Breakfast’ and the range of bikes on show consisted of everything from boutique carbon gravel racers, XC hardtails, filling rattling skinny tyred Cyclocross bikes and even a few 26” full suspension relics that their owners had dusted off for the weekend. 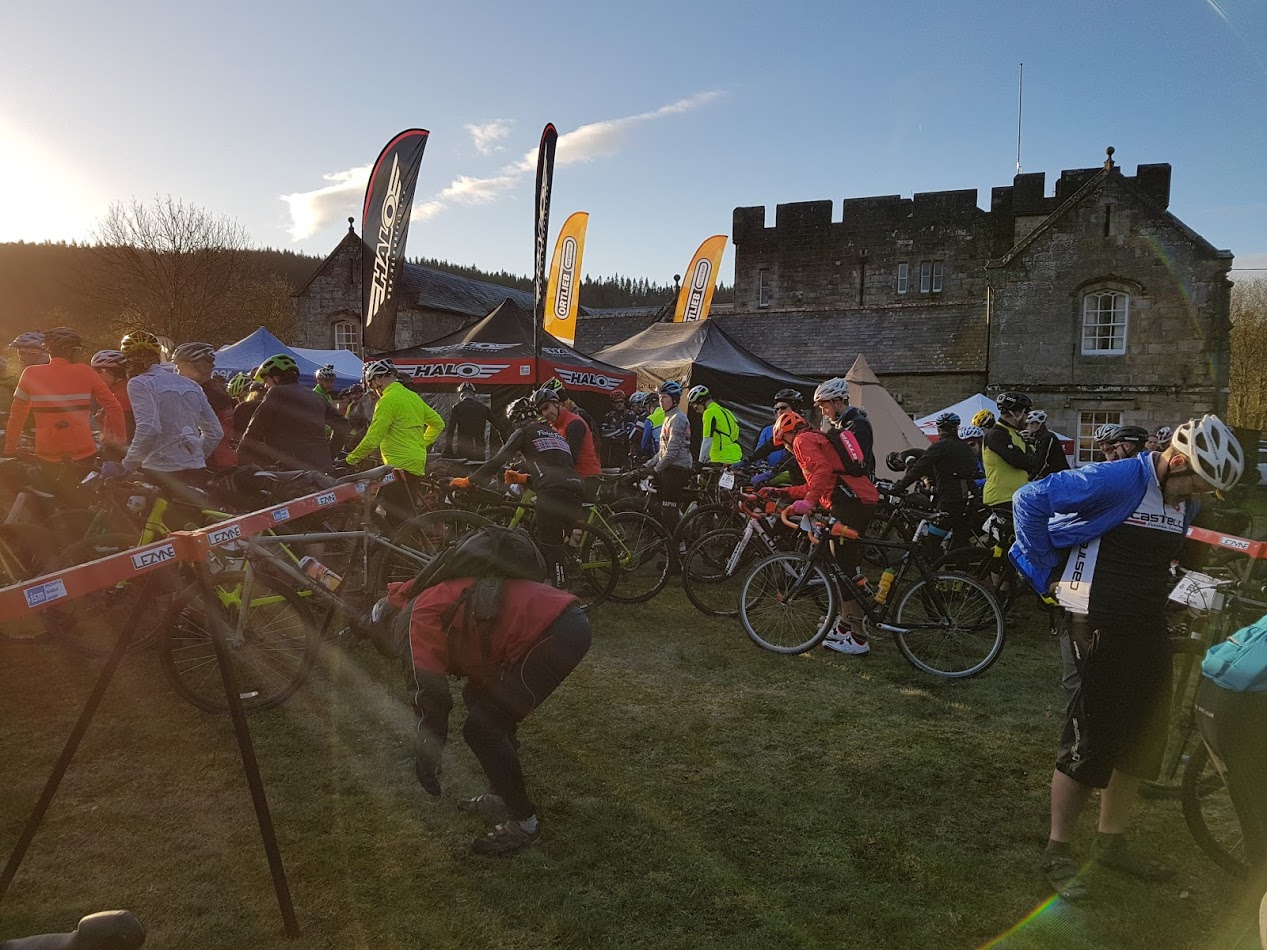 Morning start on the Reiver

With such a high rider count it took a few miles before the pack to spread out and you could fully enjoy the feeling of vast remoteness for which Keilder is so well known. Riding for 200km along nothing but fireroads, you start to get a real sense of déjà vu as a long stretch of gravel road in the middle of a commercial forest does tend to feel very much like any other long stretch of gravel road in a commercial forest. Thankfully the long flowing descents rewarded you for the monotony of the climbs and gave you something serious to focus on; flying down a loose gravel track at 38mph on a bike with very little grip does tend to focus the mind.

But oh boy, what a load of fun it was too! Two wheel slides around sweeping corners are now my new Favourite Thing. Looking at the various skid marks leading off the road and into bushes suggested that a few riders had overcooked some of the turns and with the speed you could carry, this isn’t all that surprising. I heard of a few serious crashes while riding around the course, including a couple of guys who came together on a high speed run and had to go to hospital. Coming off on gravel is going to sting a bit. 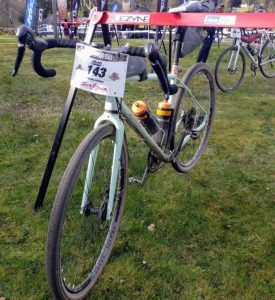 Tool for the Reiver: Specialized Sequoia and 42c Sawtooth rubber.

I used a Specialized Sequoia equipped with 42c tyres on a pair of 29er rims and found the setup was comfy enough to traverse the bumpiest of gravel without any real discomfort. Unlike one fella I chatted to on a canti-braked crosser with 32c rubber who really was suffering on the lumpy sections. Although the Sequoia was fun on the flat and a real hoot to ride at speed on the descents, it was a real lump to hustle up the climbs. Made worse no doubt by the large Apidura saddle pack I had loaded up with spare gear for every eventuality – The weather can change in an instant in moorland areas and I didn’t fancy the idea of getting cold and wet, so packed pretty much my entire wardrobe…

My fuelling strategy was a mix of TORQ Chew bars and Energy hydration mix. A few TORQ Gels were used for emergency backup should my energy levels fall too far. A bar every hour seemed enough to keep me spinning around quite happily. Team mate Nigel on the other hand seemed to be fuelled purely on cured meats which he transported around within an Alpkit Fuel Pod.

The event was very chilled out, marshalls and feed stations were great. The weather was totally awesome and I doubt future runs of the Dirty Reiver will ever see weather anywhere near as good as this year.

I’m in two minds whether I’d return. There was an enormous feeling of relief at seeing Keilder Castle and knowing that I had finally finished. The nature of 200km of gravel roads in a commercial forest does mean that it can get very repetitive and the prospect of doing it in the rain fills me with dread.

On the other hand, it would be nice to return with a lighter bike and less kit and have a real go at bettering my time of 10h 17m. 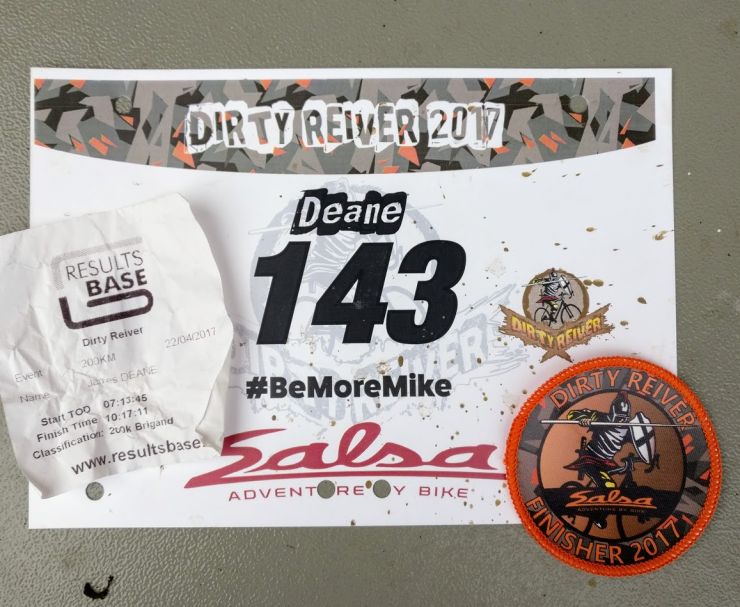