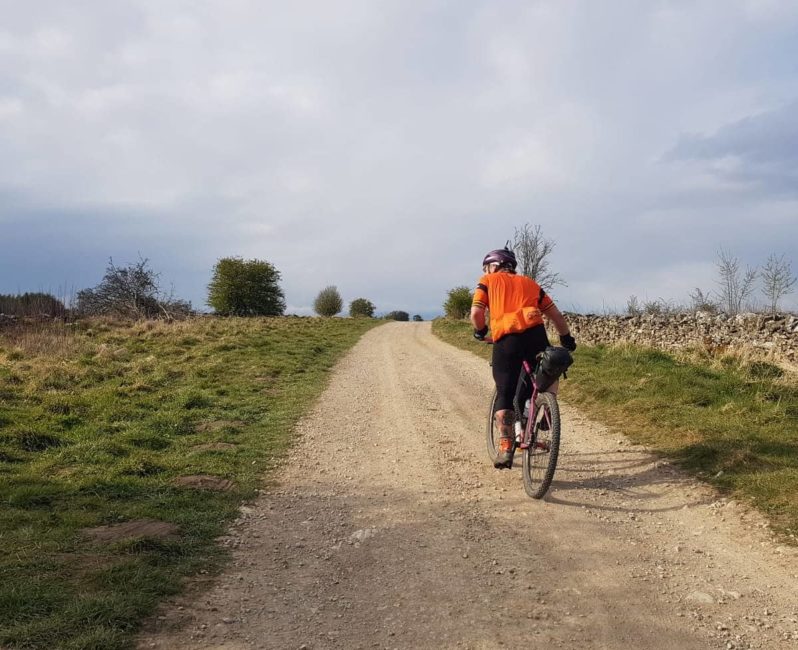 Big weekends on the bike don’t always go to plan: but that doesn’t mean that they have to be any less enjoyable. Lewis Clark shared his Dales Divide journey with us, from relentless climbs and a reroute to a more ‘sporty tour’, before a more pressing matter took priority in the foul weather…

Over the first weekend in May I headed down to take part in the Dales Divide. With it being one of the first ‘big’ events being held in a while, it definitely got the hype and excitement levels up amongst all of us who seek out the enjoyable suffering these events bring. On Friday, riders congregated in the car park of the Sandside Inn which the owners gratefully let us use for the weekend. Chippy dinners and a few beers were had and the usual discussions of kit choice, tyre size, grand plans and unrealistic ambitions went on until the wise, uncharacteristically early, decision to get some sleep was made with most in vans, some in tents and Marcus under a beer garden bench (something we both have found we like).

Good weather was forecast for the first two days of the ride and it kicked off on a bright, still morning, albeit a bit nippy. Speeches done and riders on the way we all spread out relatively well after the first few climbs and gates. The initial part of day one could lull those who hadn’t read much into the route (me) into thinking this speedy pace was doable and the full 600 kilometres was definitely good to go. 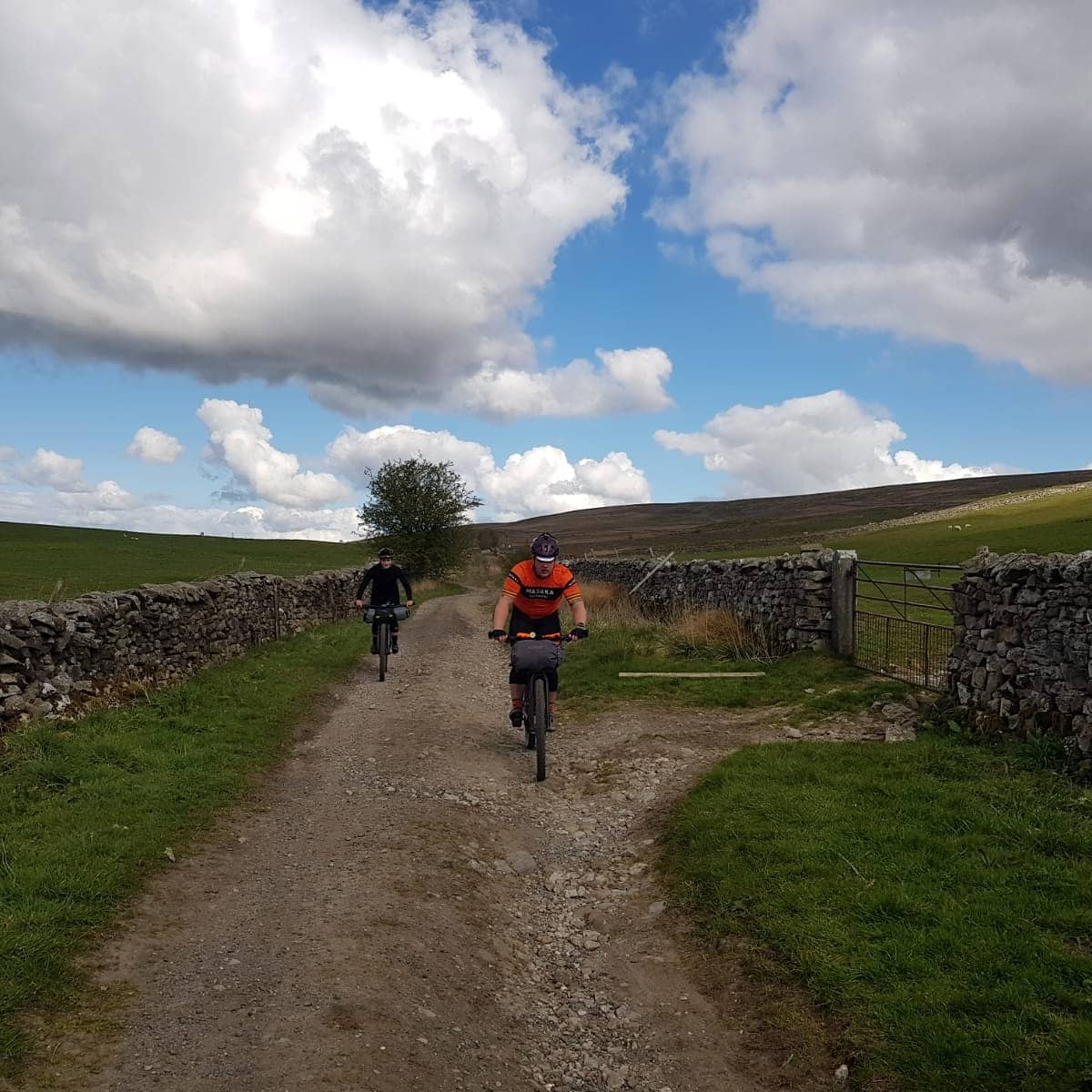 The route soon bared its teeth as the real climbing began and had me re-evaluating my grand plans of smashing out the 600 kilometre route. The arduous climbs and lack of villages had me wondering where the shops were to stock up on more food and water. Again, my own fault as I hadn’t read into the route much and it bit me in the arse big time with many a bonk knocking at the door. However, I still enjoyed a good day’s hauling the bike up and down the relentless climbs with a decent couple of folk which made good work with the gate sharing duties that saw us into Pateley Bridge before the garage and pizza shop closed.

Here I checked my phone and saw some messages from Stu who I had come down with. He was not having a good time and decided to camp near a reservoir and cycle back to the van the next day. Not one to pass up a nice camp spot, I soon met him and after a decent sleep, morning coffee and some positive chats we were both keen to do the short route as a ‘sporty tour’ and make it back to the van without any need for a stormy, cold night’s bivvy on Monday.

The pace changed for us, no longer needing to push it: we just had to do roughly 200 miles over the next two days which was comfortably doable for us both. We cruised into York for some food, dodging coppers when we didn’t understand what bits were pedestrianised, and then joined the shortcut route to head up to Osmotherley. There was plenty of flat riding around York which was good for a bit after the previous days climbing but on the singlespeed it got a little bit tedious. 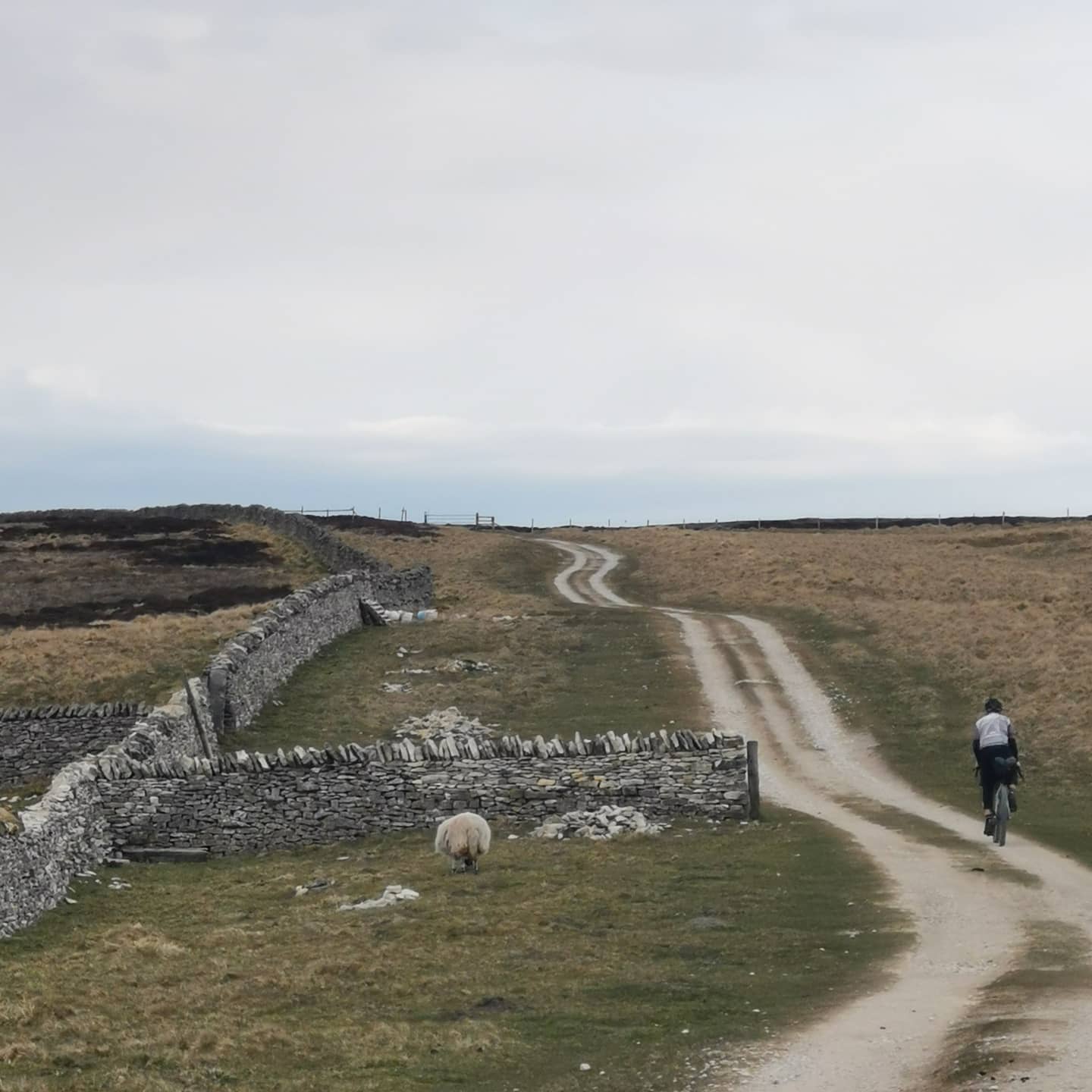 Dusty, undulating ridges like these are only made even better with the promise of a pub at the end

When the hills did return, it was in the shape of a wall than a road above High Kilburn. Honestly, steepest sustained climb I’ve seen, go check it out. After that, a long undulating ridge in the sunshine led us to a pint and pub dinner, which set us up for a further 30 kilometres to our bivvy spot. With some riders going past the wood we were in,  some deer were spooked and it was a mild panic hearing them clattering through the undergrowth towards us while being stuck in my bivvy. Luckily no hoof-shaped bruises in the morning. 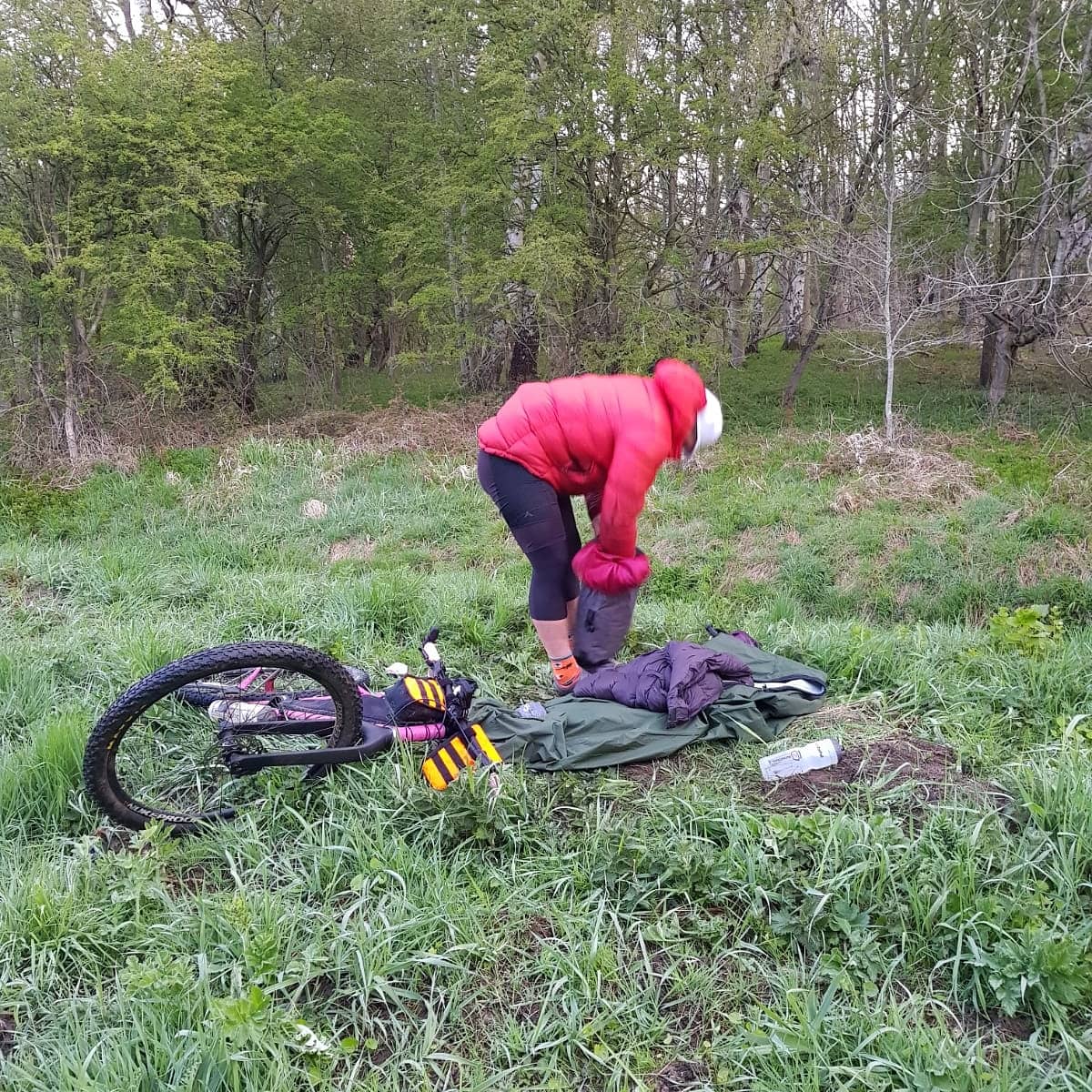 Even at a sporty touring pace we got up early to ensure we got the bulk of the day’s riding done before the incoming weather. Catterick Garrison McDonalds revived us with McMuffins and pancakes (I was having a sluggish morning so far) that saw us fuelled up and ready to go. Probably some of my favourite riding was coming up over the grouse moors, past the bothies and estate buildings up high. I don’t usually like the manicured and relatively lifeless grouse moors but the grey moody skies suited these. Coming down towards Askrigg was a speedy loose descent with the rain beginning to set in. 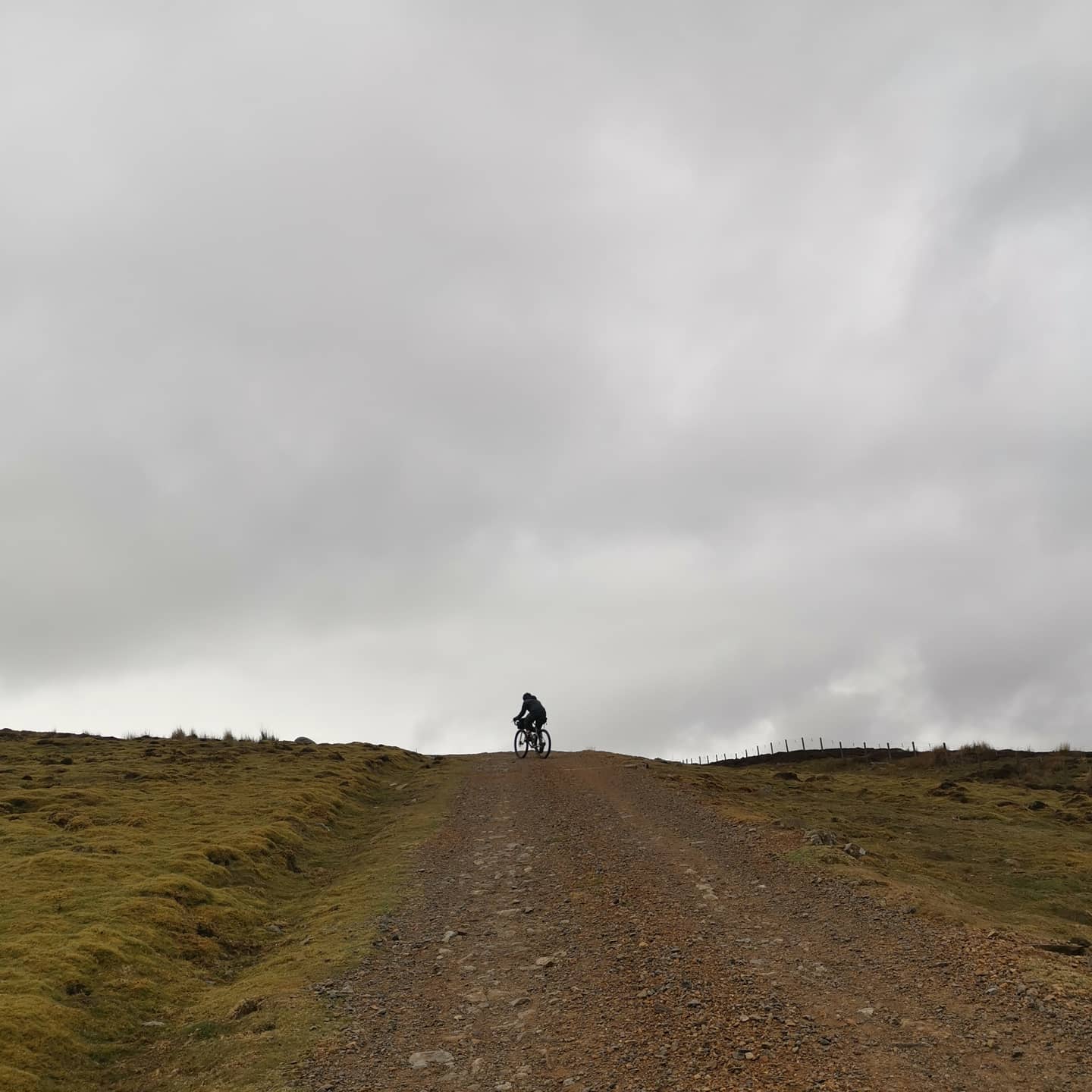 Stu using the winch gear on the Alfine to climb actual walls.

From here, the last and longest climb of the route started, and with every metre of ascent the weather grew worse. A puncture saw me faffing trying to figure out what tubes I had left and I tried to stick a patch in the rain. Note here that myself and Stu are well seasoned in dreich cycling, and were having a hoot in the very ‘Scottish’ nature of the weather.

Here we were passed by Lauren, who we had given a lift down. She was trying to keep the gap from Liz who wasn’t far behind, charging up the climb, looking burst but still going real strong and maintaining second position for the female category. After the puncture, the tracks had turned into streams and I resorted to walking which was actually keeping me a bit warmer than grinding up pedalling. Near the highest point, the Roman road crossed a singletrack road and it wasn’t long after that before I saw Stu and Lauren slowly pedalling back towards me, wrapped up like a jacket potato in Stu’s emergency blanket and gilet. This wasn’t a good sign and I soon realised that the extreme weather had taken its toll on Lauren.

With a rider in trouble we put stop to our ‘race’ and focused on assessing the situation and coming up with a plan. This extreme weather was sideways snow, sleet and rain with gusts of 50 plus easily and with hypothermia already setting in, Lauren I made the decision to call for help as the remote nature of where we were would incur a lengthy wait for any emergency service to arrive. Initial plan was to aim down the track and hope for a farm but that was uncertain and with her hands not functioning it wasn’t going to be a safe or quick descent. Second option was that I made a short cycle back to ask a campervan that I’d seen on the road to see if it was possible to get Lauren inside to get her out the wet gear and in as much down things as I was carrying and then assess if there was any improvement in her condition. There was long trudge back towards the campervan with the weather still not relenting. With Lauren slowly hobbling and rolling towards the van, assisted by Stu, the owner was very helpful and made her hot drinks and more importantly let her in out of the weather.

With Lauren inside and showing initial signs of improvement myself and Stu boosted down the road to Hawes to plan the fastest route back to Arnside to get the van and get back to collect Lauren and her bike. Due to the Covid rules you can’t sit inside anywhere in England, so we got some shelter in the public toilets whilst we perused maps and figured out what roads to take. Chris Ellison had heard about the situation and was heading to collect Lauren. I made contact with him to let him know where she was as the signal was bad up the hill and realised he would be passing us. To save some time and still not too sure how Lauren was, we took the offer of a lift and hid our bikes behind the chippy which we could then collect as we would be coming back to get Lauren from the hill.

All is well that ends well. We made it back to Lauren who was chipper and cheery having warmed up completely. With a few round trips we collected the van and the bikes and set off to return across the border already planning for the next Dales Divide.

This whole incident that developed did show that even outside of the usual winter season, the weather can be brutal and be a serious force to be reckoned with. Decision making is key here and having the experience, training and equipment to make the right decisions at the right time can make the difference between surviving and needing assistance or rescue. This should hopefully be a reminder to all to take it seriously, to book on an adventure first aid course, have an idea of how to spot the signs in yourself and others when things aren’t right and know what plans or options you have to address the situation. I know that the Spot Trackers are a decent reactive solution however it doesn’t replace the need to know how to avoid these situations, prepare for them properly and if something does happen instant actions on the ground can make the difference, especially in time critical situations. 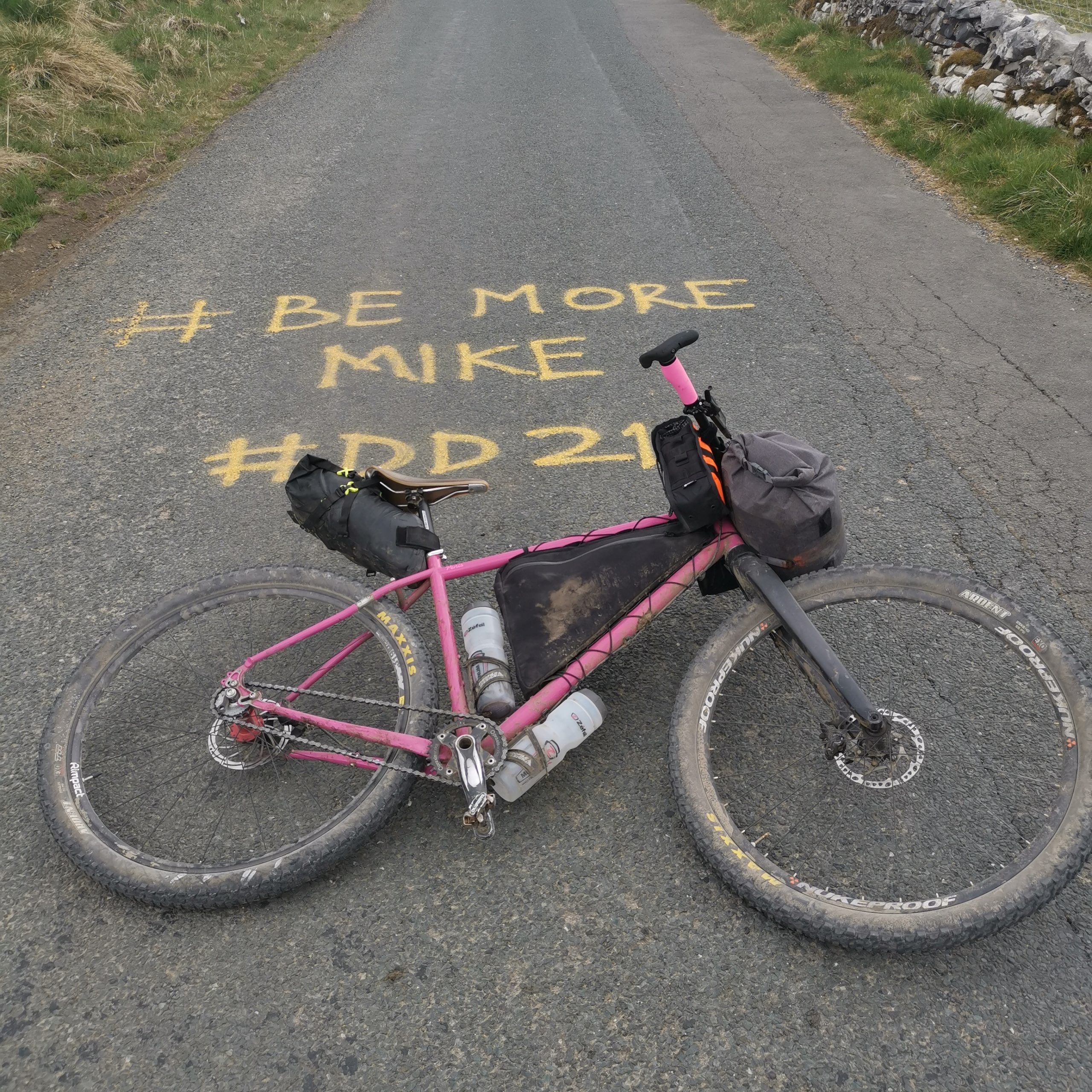 A final thanks to Chris, an organiser that goes above and beyond. A truly amazing route through an interesting landscape and idyllic villages that I am looking forward to completing next time round.