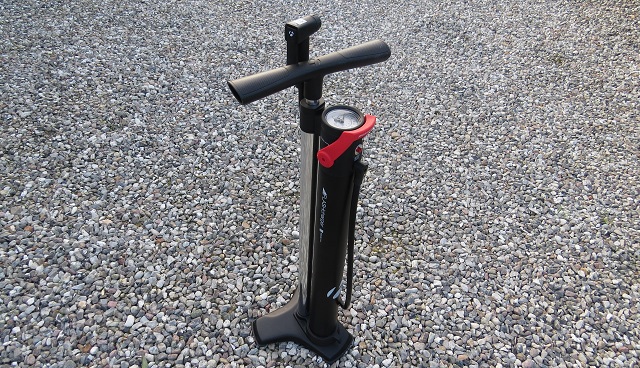 Following on from John’s review of the Airshot, comes my long-term review of Bontrager’s Flash Charger pump for tubeless tyres.

By now, I think we all know that tubeless is best, but there is no denying that it is a messy and frustrating process fitting tyres, so I was more than happy to cough up the money on this new solution from Bontrager.

Build quality for the retail price isn’t quite what you’d expect. There are a lot of plastic parts which feel very flimsy, especially the pump handle which flexes under your weight when you are pushing down on the pump.

What does it do?

The Flash Charger can be used just like a normal track pump, but if you flip the red handle down and pump away to pressurize the chamber, you can ‘charge’ the system up to 160psi. Next, you attach the pump to your tyre valve, lift the lever and the chamber empties a high-pressure blast of air to seat the tyre bead onto the rim.

For over a year, it sealed a variety of tyres to various rims without any problems. Everything from skinny cyclocross tyres to 29+ Surly Knards have shot up instantly. Then, all that’s needed a few further pumps of the Flash Charger to get the tyre up to the optimum pressure and riding can commence. 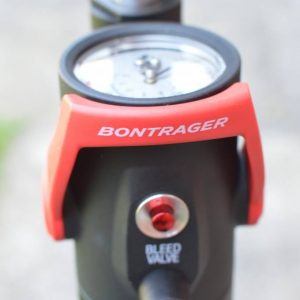 Unfortunately, my Flash Charger is quite as flash as it was 12 months ago. As already mentioned, the flimsy plastic pump handle started to bend from repeated pumpings (that’s a new term, and I like it) and the accuracy of the pressure gauge has grown increasingly vague. Which isn’t a big issue as I’ve always checked pressure with a digital gauge anyhow.

The biggest disappointment is that the Flash Charger steadily became harder to pump up. It was a steady deterioration until it finally came to the stage where I had to put my entire bodily force behind the effort to push the pump handle down. It has now seized up completely and I have reverted to my trusted old Joe Blow Sport. Joe is probably 8 years old now and still going strong.

When new, I thought the Bontrager Flash Charger was the most awesome tubeless inflator going. Now, I would recommend the Airshot, which at £60, is cheaper and works equally well and with less moving parts. But you’ll need a pump to go with it. 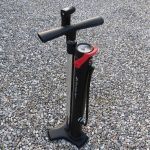 Great concept but gave up the ghost within 12 months

A quick comment for balance….I bought my Flashcharger the same time as James and mine is still going strong. I would echo his comments that the handle can feel flexible but mine hasn’t broken yet! The main downside as I see it is that while tubeless is (for now) mainly for MTB usage the increments on the gauge are too close to accurately inflate to MTB tubeless pressures (30psi and lower), let alone Fatbike levels (10psi and lower). It’s never failed to inflate any MTB tyre I’ve tried, I can’t comment fairly on Fatbike tyres ability as neither of my… Read more »