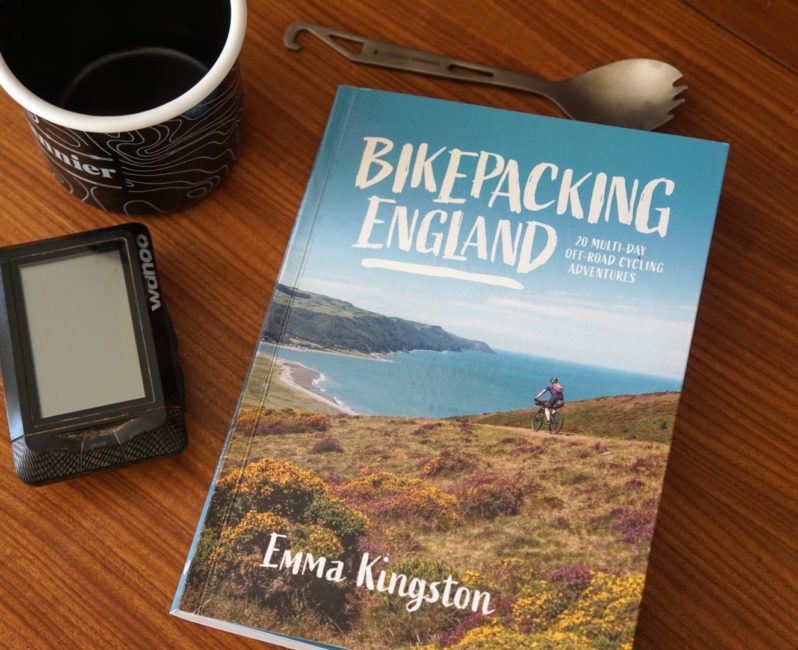 The freshly released Bikepacking England book from Vertebrate Publishing is a treasure trove of routes and photographs that’ll make you want to load up your bike and head out the door, right now! With 20 routes from Dartmoor across the west of England and up to Northumberland, plus routes on both the Isle of Wight and Isle of Man, there’s a whole range of accessible routes to tempt all aptitude levels.

The A5 book is prefaced with loads of handy tips for beginners about bikepacking, including what to pack, wild camping legalities and tips, choosing your bike and important safety information. The routes are then split into four areas: the South West, South East, Midlands and Northern England.

Each route spans several pages, with a double spread map detailing interesting historical sites, other points of interest, swim spots, train stations and campsites, to name but a few. A full altitude profile is given too, as well as the percentage off-road, so you know exactly what you’re letting yourself in for. Each route is also graded, using the same colours as mountain bikers will be familiar with: blue for easier introductory routes, red for harder, and black for the most technically challenging routes. 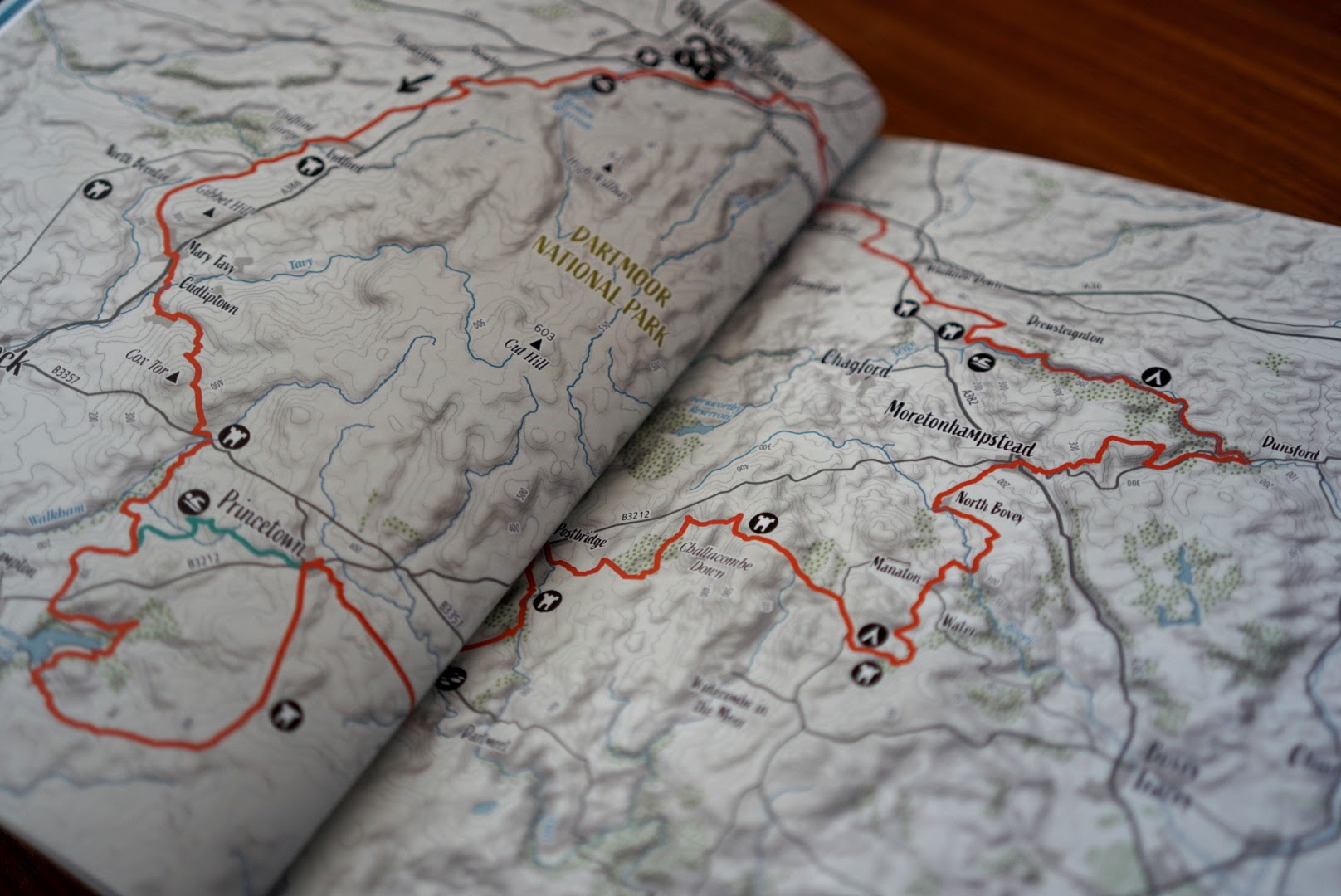 Detailed maps for each route come in really handy

Expect a detailed introduction and information about each route, covering the history of the area, and description of the route that’ll leave you buzzing with anticipation. All of this is accompanied by a series of stunning photographs captured both by Emma herself and her Dad. You can really get a feel for the terrain and some route highlights along the way. Once you’re ready to roll, there’s a website link for GPX route file downloads. The hardest part really is deciding which to do first! 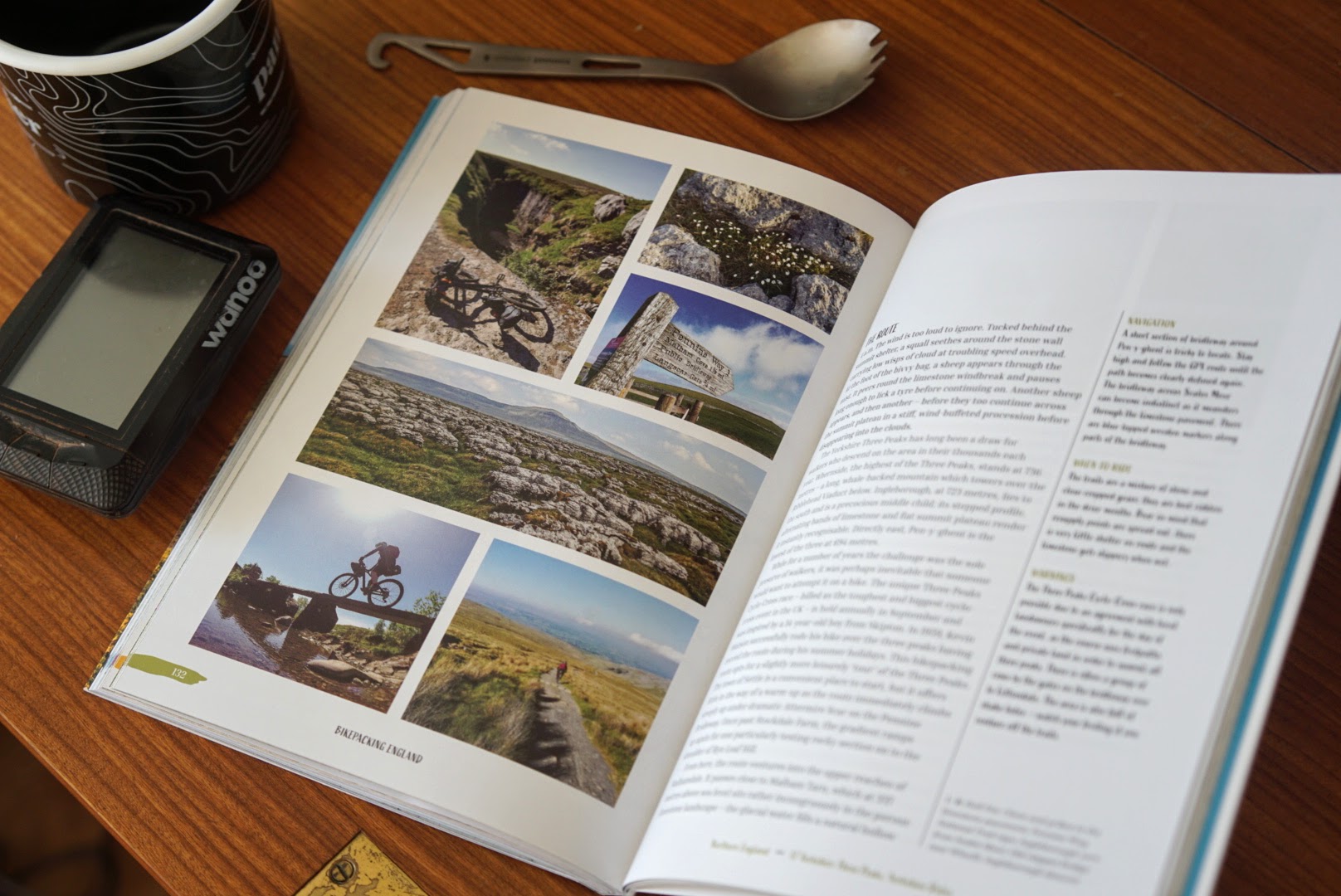 We chatted to Emma to find out a bit more about her motivation behind producing the book and a few tales from the (g)road.

First up, tell us a bit about yourself Emma and what your riding vibe is.

Hi there. I’m Emma, I’m based in Bristol and I guess I’d call myself an outdoor enthusiast, writer, teacher, and a self-confessed map geek. I’m keen to stress the ‘enthusiast’ bit – I enjoy getting outside in different ways and while I don’t particularly excel at any of these things, I have a lot of fun doing them which is much more important in my books. The same goes for my riding. I’ve been cycling off-road on my mountain bike for as long as I can remember. I’m certainly not the fittest or quickest rider out there and I’m definitely more about having fun on my bike than winning any medals or breaking any speed records. Whilst I’ve started pushing myself a bit more in terms of mileage when I ride alone, I like riding my bike as much for the places it takes me to as the trails I get to ride on the way. 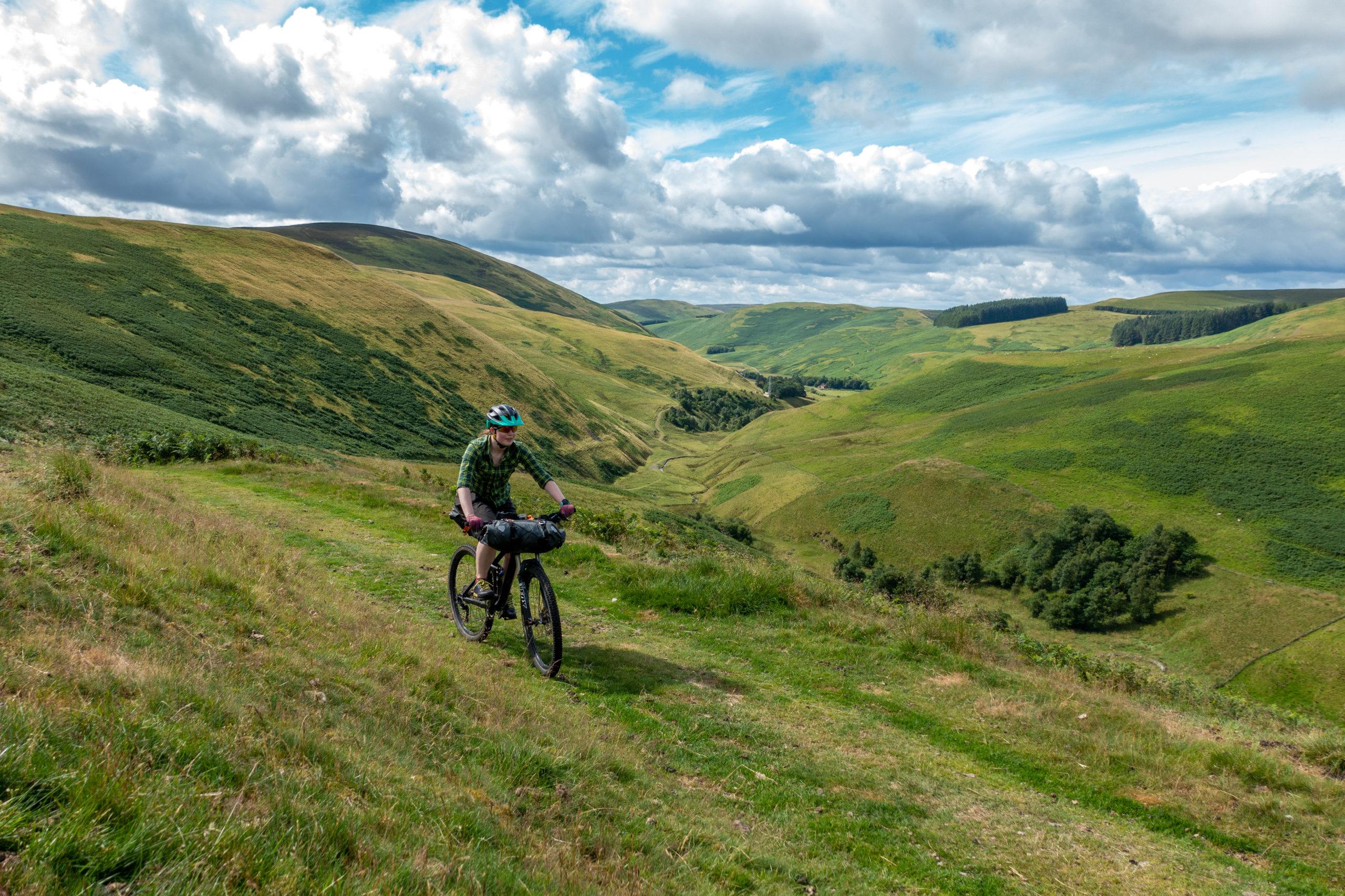 Where was the seed of an idea first sown for Bikepacking England?

Oh, that’s a tricky thing for me to pin down exactly. It was more a creeping, gradual process as the idea took hold, rather than a single defining moment. It was never meant to be a book – I didn’t set out to ride all these routes with the thought that they would make a great idea for a guidebook. Bikepacking England actually started off as something just for me – over the last few years the trips have been a way for me to decompress, carve out some time to myself in the outdoors and have fun riding my bike – but then just at the start of 2020 I had a road biking accident and spent those last precious Covid-19 free months recovering on crutches. Writing, route planning and tinkering, and dreaming of future escapades kept me sane, which I imagine probably sounds familiar to a lot of people.

If I had to pick a particular moment, it would probably be stumbling across a book called Waymaking – an anthology of women’s adventure writing, poetry and art – also published by Vertebrate Publishing. It did a wonderful job of showing the hugely varied ways in which other women experience and write about the outdoors and made me think that I might have something worth sharing.

How long have you been working on the project, devising and recceing routes?

A number of the routes in Bikepacking England were fairly straightforward for me to devise, especially the ones on Dartmoor, Exmoor and the Cotswolds. I had walked, backpacked and ridden a lot in these places over the years so it was more a case of deciding which of my favourite trails to include, which way to run them to ensure the best riding on a laden bike, and how many waterfalls and tearooms I could reasonably get away with cramming in. These routes largely worked out first time, bar one or two tweaks. Other routes took a bit more work. The Cheviot Hills in Northumberland, for example, were totally new to me and I spend the best part of a week up near the border eating wild raspberries, swimming in remote plunge pools, soaking up the area’s history, and riding as many of the trails as I could. 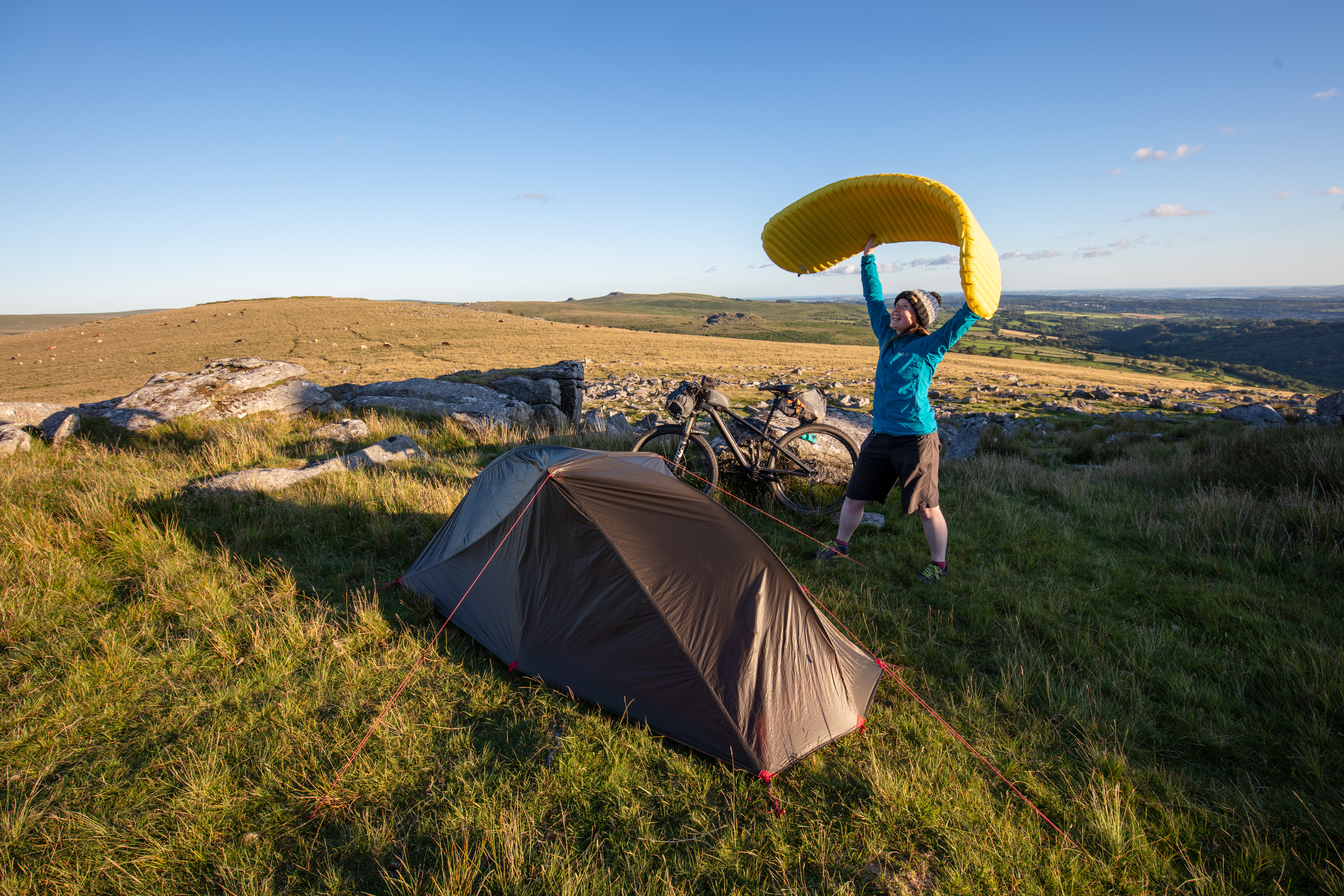 Do you have any particular routes that you’d recommend for beginner bikepackers for a more tame introduction?

Definitely. If you are new to bikepacking or riding off-road, I’d suggest trying out one of the ten ‘blue’ graded routes first as these are a bit shorter, less remote and the riding is mainly non-technical compared to the ‘red’ and ‘black’ graded routes. Perhaps have a look at the Cotswolds loop which is full of buttery smooth singletrack. That one is a personal favourite of mine when I’m looking for a more mellow but really satisfying ride. The south coast could be a great choice too – bikepacking on the Isle of Purbeck or the Isle of Wight always feels like a holiday with sea swimming and ice cream virtually on tap.

If you could only choose one as your stand-out favourite route, which would it have to be?

Ah, another tricky question. I usually go for Dartmoor – it’s a classic – but I’ve just been looking back over photos from the Yorkshire Dales so I’m feeling pretty nostalgic. There are two routes in the book which explore different corners of the national park, but the route in the south-west corner of the Dales is based on my first ever bikepacking trip up north. Inspired by the famous Yorkshire Three Peaks walking challenge, the circular loop gets up close and personal with the sphinx-like Pen-y-ghent, glimpses Whernside through the arches of the Ribblehead Viaduct and finishes with the option of a hike-a-bike to the summit of Ingleborough, Yorkshire’s second-highest peak. It’s quite a tough route but the riding is brilliant, and the limestone scenery is simply stunning. 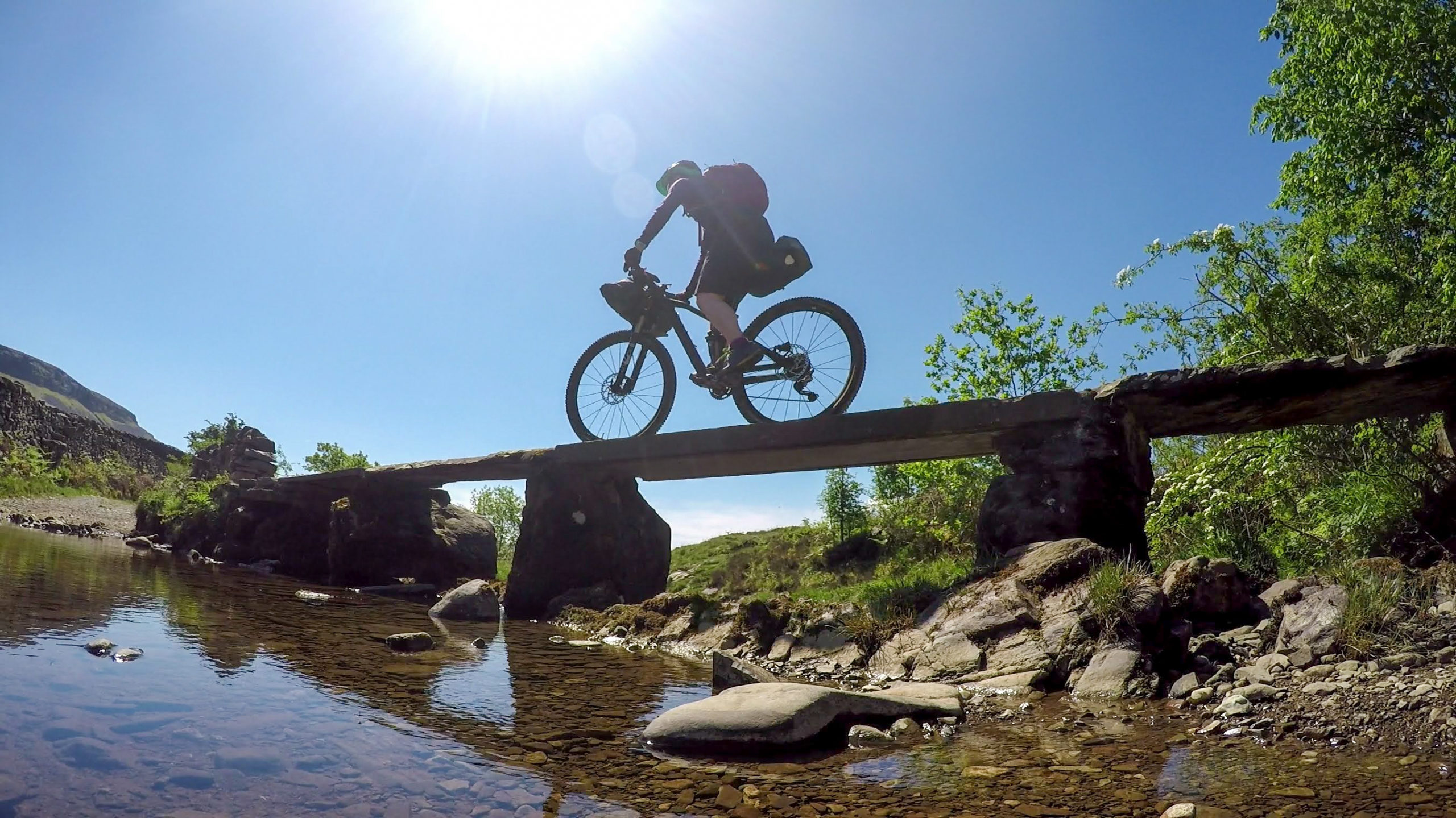 The draw of Yorkshire is hard to beat. Photo: Emma Kingston

Any funny stories during the recce phase? Mishaps or otherwise?!

There was that time I found the perfect bivvy spot on the Isle of Man, high up on the cliffs in what I believed to be a disused quarry in order to watch the sunset above Peel Castle, this stunning Viking fortress which juts out into the Irish Sea. I got woken after midnight by a convoy of the most enormous monster trucks you can imagine – I still have no idea what they were doing there at that time – which rumbled past terrifyingly close to my bivvy bag with these blindingly bright headlights and huge tyres. I can still remember the sense of relief when everything finally fell quiet, only for them to turn round and come back the same way 10 minutes later.

Are we right in thinking you took on the project with your Dad as photographer? How did that dynamic work for you both?

After a fashion… Once the book was underway, I went through my existing trip photos – captured using a combination of my gopro, camera, tripod and a self-timer – and identified routes that either needed some more photographs or simply some better ones. After that, it was a case of convincing my dad who is a semi-professional photographer to go on some trips before my deadline. Sometimes, he would come for a walk or go paragliding near or above where I was riding, and we’d see if our paths crossed. He came bikepacking a couple of times and it was really fun introducing him to something new. I think he enjoyed it. Just under half of the photographs in the book are his and you can see more of his work on Instagram @robkingston360 and on his website: www.robkingston.com 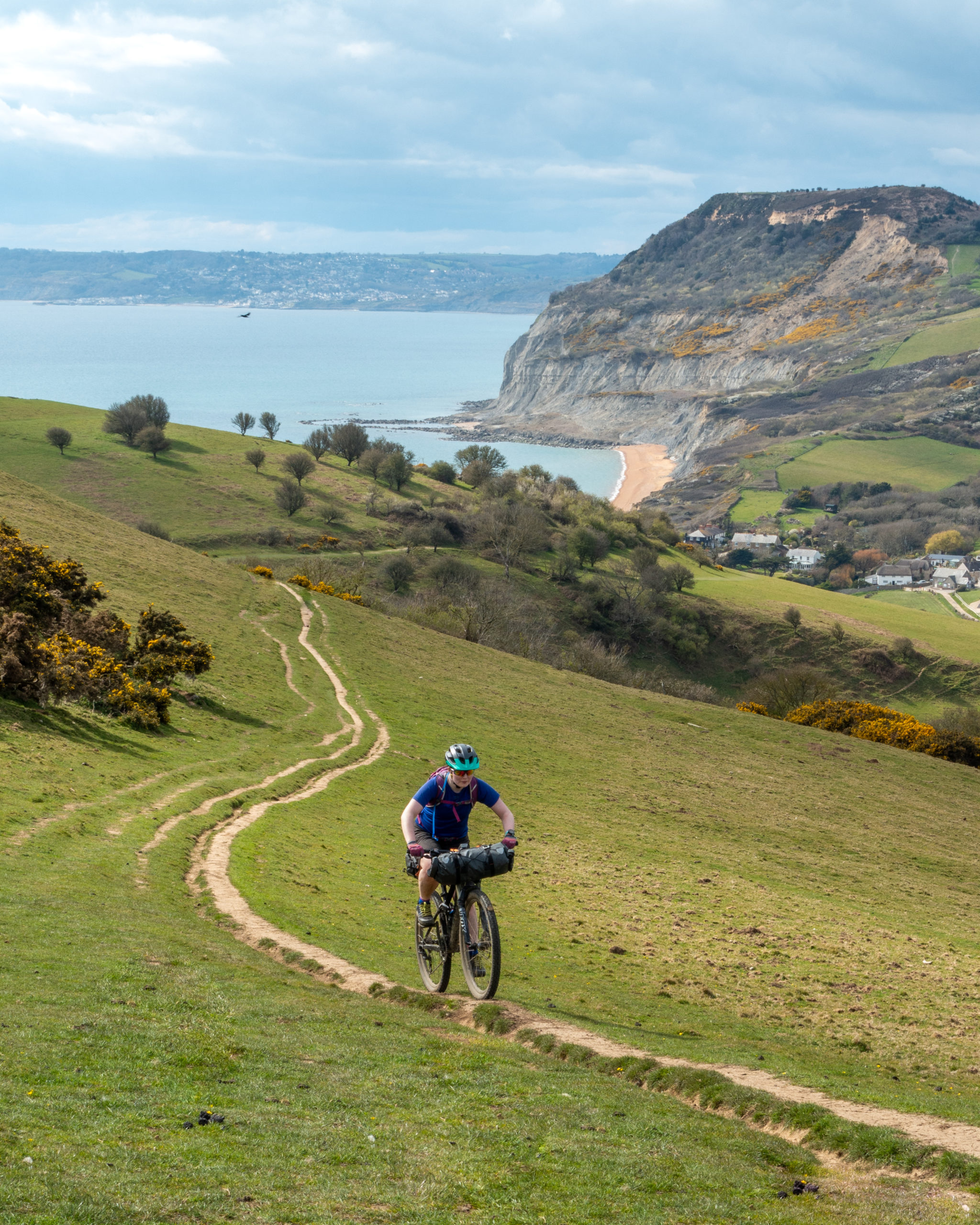 I’m going to give this a hard pass – no one wants to hear about Mugshots or Idaho Mash. I’ve never spent more than 5 minutes boiling water and stirring it into some sort of dehydrated meal. Someone, please, take me bikepacking and introduce me to proper meals.

Did you try any memorable local delicacies on your travels across England writing the book?

One of the routes goes around the Mendip Hills AONB and the Somerset Levels where farming still plays a key role in the region’s economy. A bikepacking trip here wouldn’t be complete without a visit to some of the independent dairies, farm shops, orchards and breweries in the area like Thatchers Cider, Yeo Valley and the Priddy Good Farm Shop near Cheddar Gorge. The famous cheese straws at the Peaslake Village Store in the Surrey Hills need to get a special mention too.

What would you say to anyone who’d like to try bikepacking for the first time but is feeling nervous?

I would say don’t ever apologise for being a beginner. We all have to start somewhere. Try not to compare your beginning to someone else’s middle. And remind yourself that adventure is a very personal thing – it comes in all shapes and sizes and will look different from one bikepacker to the next. Start off small. Remember to look up. Go with a friend who can show you the ropes. And use those first few trips to learn what it is that you love about bikepacking so that you can’t wait to go again. 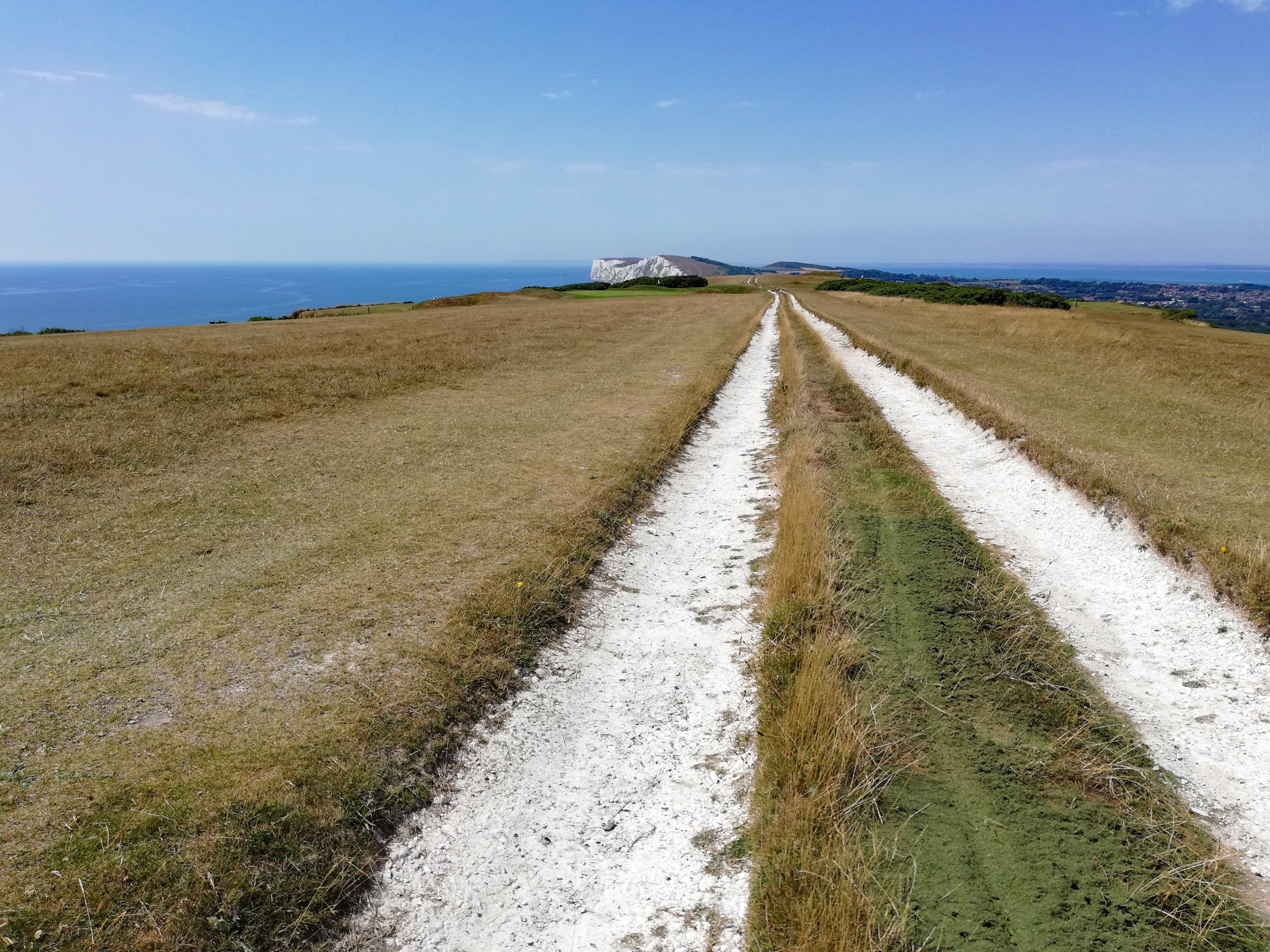 Check out more from Emma at EmmaOutdoors.com and @emma.outdoors and check out Bikepacking England here.