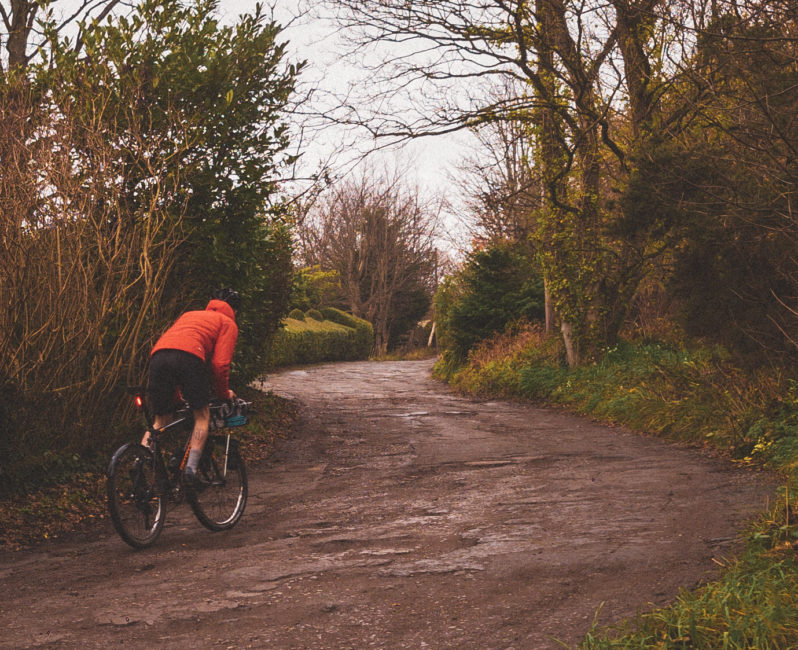 Mechanic Joel Jones of Wayfarer Cycles, an independent bikeworkshop based in the Wirral, North-West England, has a pretty ambitious plan up his sleeve. We’ve seen a few bizarre charity challenges in 2020; Molly Weaver’s #DirtyWeaver perhaps the most hilarious, but this one is something else altogether.

We chatted to Joel about his fab new basket set up, and why he’s #basketeveresting this Movember.

First up, why go for a basket anyway? Tell us about your set up and your upcycled bag. 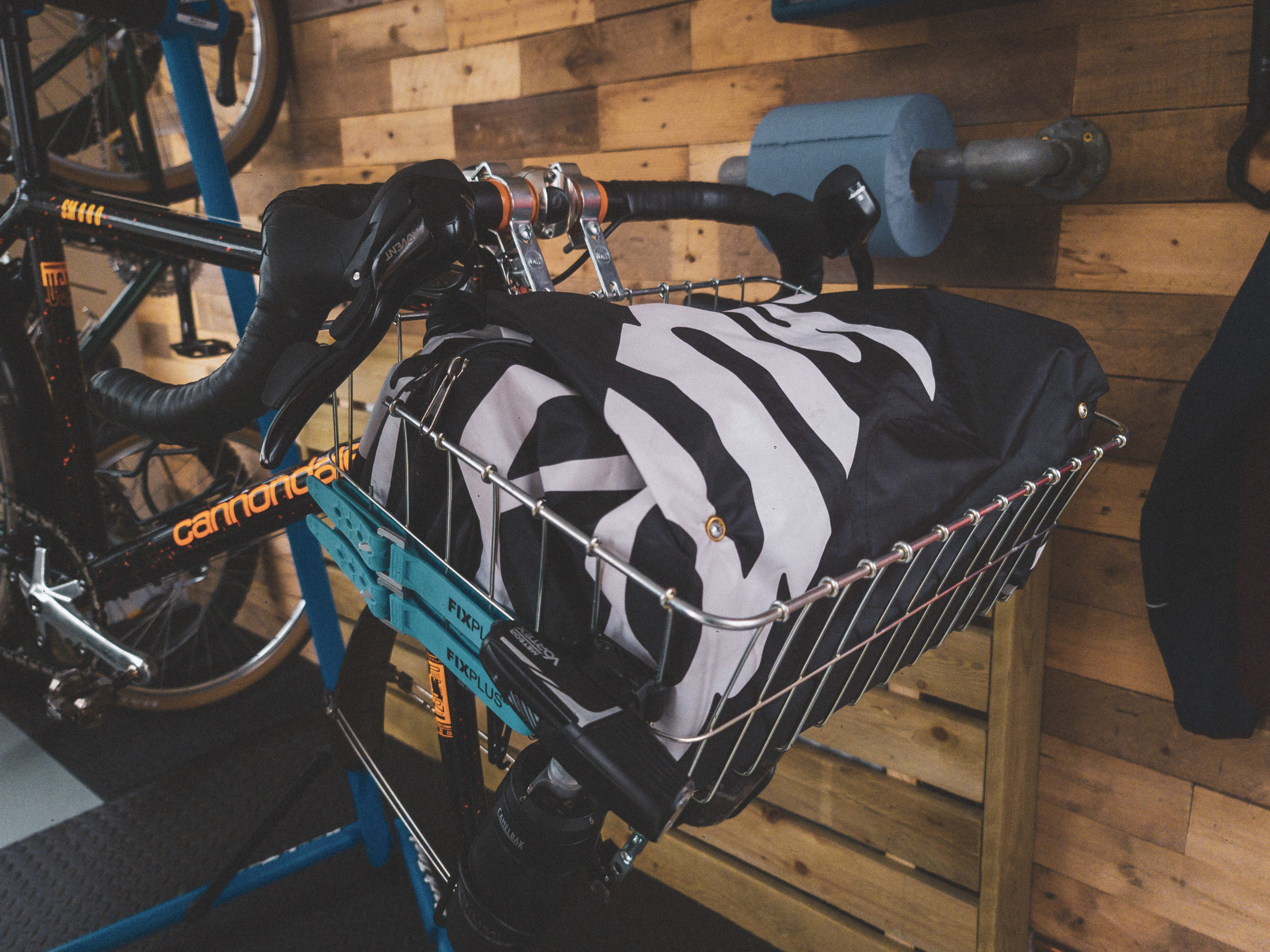 The basket bag is made from old an Campagnolo wheelbag, neat!

I think the humble basket has its place! Having used plenty of standard bikepacking bags, and having been through the game of Tetris that is fitting all of your bits in, it’s very appealing to me to have one big open compartment!

The basket is a Wald 1392, so the second biggest that Wald make (I think). This means for general use I can deliver parcels, do the grocery shopping and run errands with ease, and for bikepacking use it should negate the need for the extra space of a swinging seatpack, possibly just a half frame bag instead!

The bag I’ve made to go in it was more of a money-saving tool, to save splurging on an expensive basket or rando bag straight away! It’s a Campagnolo wheelbag with the bottom chopped off and restitched into a bathtub shape, which thankfully fit perfectly into the basket when it arrived. 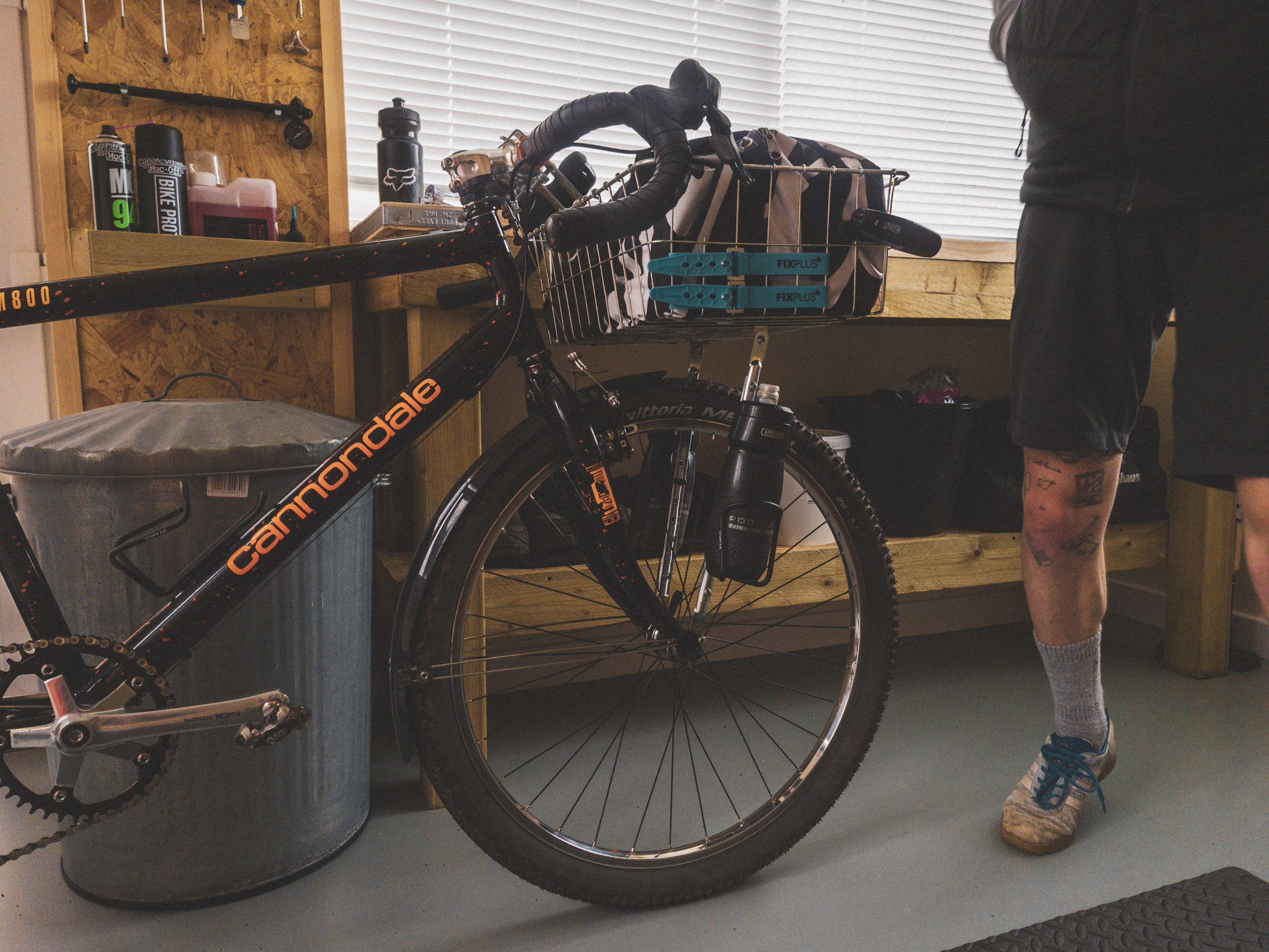 With a basket and 26″ wheels, this is certainly not a super modern build but a gorgeous classic.

I might make a more refined version, but for now it cost nothing, is fully waterproof and chuffin’ massive!

So what is #basketeveresting? What does it actually involve? 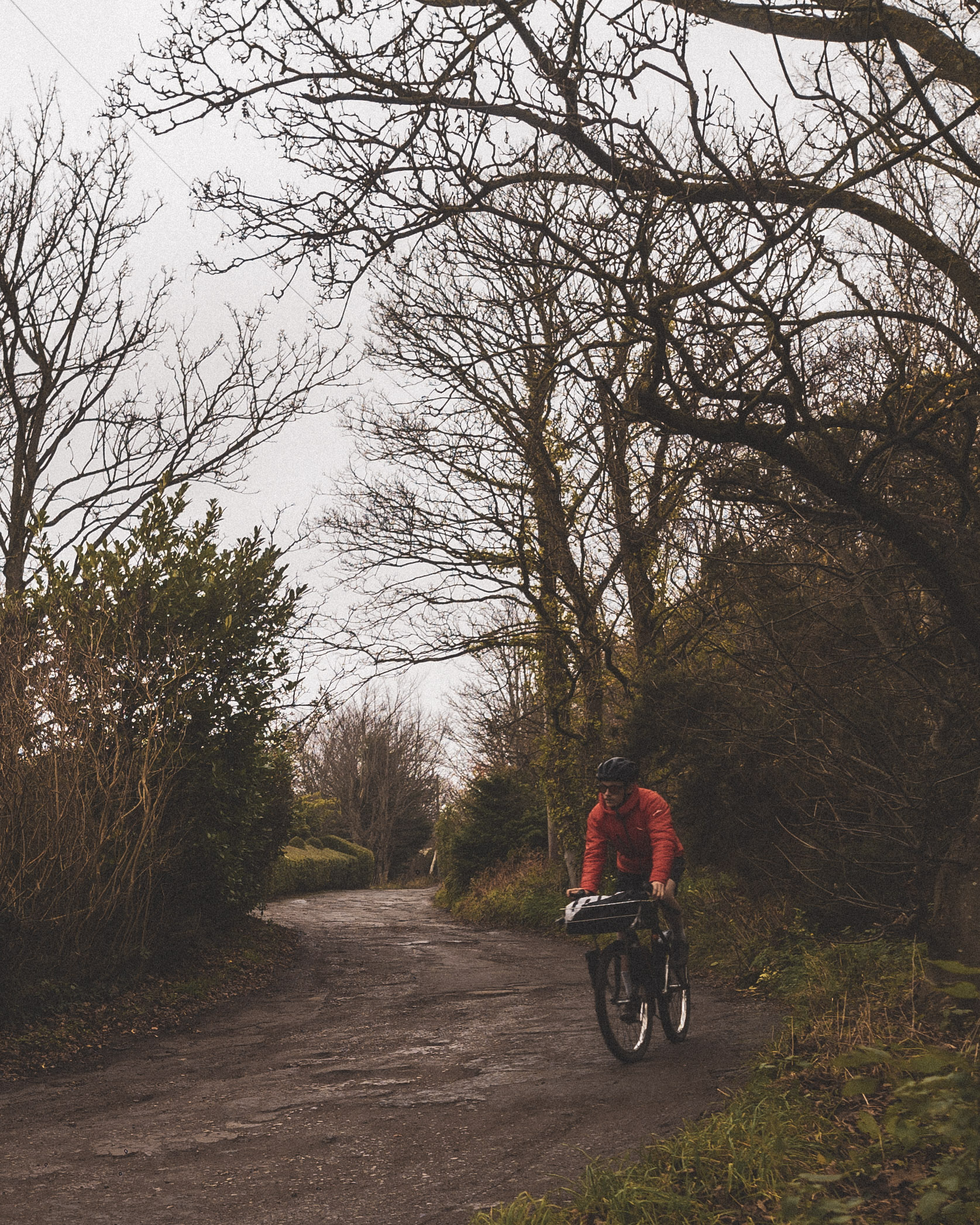 Joel has been recceing the climb on Oldfield Drive

#basketeveresting is essentially a self-supported Everesting (other than free coffee). For those who aren’t barmy, Everesting is riding up and down a single hill, in one continuous push, until you’ve accumulated 8,848 metres in elevation, the summit height of Everest!

Normally you’d have support and food at the top etc, but as we’re in lockdown, the basket will serve as my support and spares, carrying all of the calories and bits I’ll need to get me through!

Tell us about the hill you’ve chosen, and all the gory stats!

The hill is Oldfield Drive in Heswall. I recently discovered it has street view if anyone wants to virtually walk it!

I picked it as it happens to be my favourite climb on the Wirral, however it also has more elevation in a shorter time than any other climb around, so it was an easy choice.

The road itself is unsurfaced until the last 50 or so metres and riddled with potholes pretty much up to that point. It’s about half a mile from bottom to top, starting around 5-6%.

Halfway up there is a small cluster of houses and a right turn takes you onto the steeper section. The next turn hits around 10%, maxing out at around 15% as you hit the last bit of tarmac.

Luckily as you turn around to descend, you have one of the best views there is over the Dee Estuary to Wales!

Why not just do a conventional everesting challenge, isn’t that hard enough?!

It definitely is hard enough already, admittedly, but as I’ll be raising money for Movember and having used cycling to battle my own mental health issues in the past, I didn’t want it to be conventional.

For me I think the basket is symbolic of the extra weight I put on myself at that time and how much easier things got once I started to unburden myself to close friends and family!

I’ve met some awesome people already this year and had some amazing conversations with other men around mental health and sharing our feelings.

What do you think will be the most challenging part of the #basketeveresting?

Descending with the basket. I’m going to have to take it slow! I know all of the smooth lines when ascending but its difficult to pick them out on the way down again.

It will also be the longest I’ve been in the saddle, previously the longest is 10 or so hours, so I think the mental side of that will be challenging as well!

Tell us your gearing set-up; what’s the tactics here? 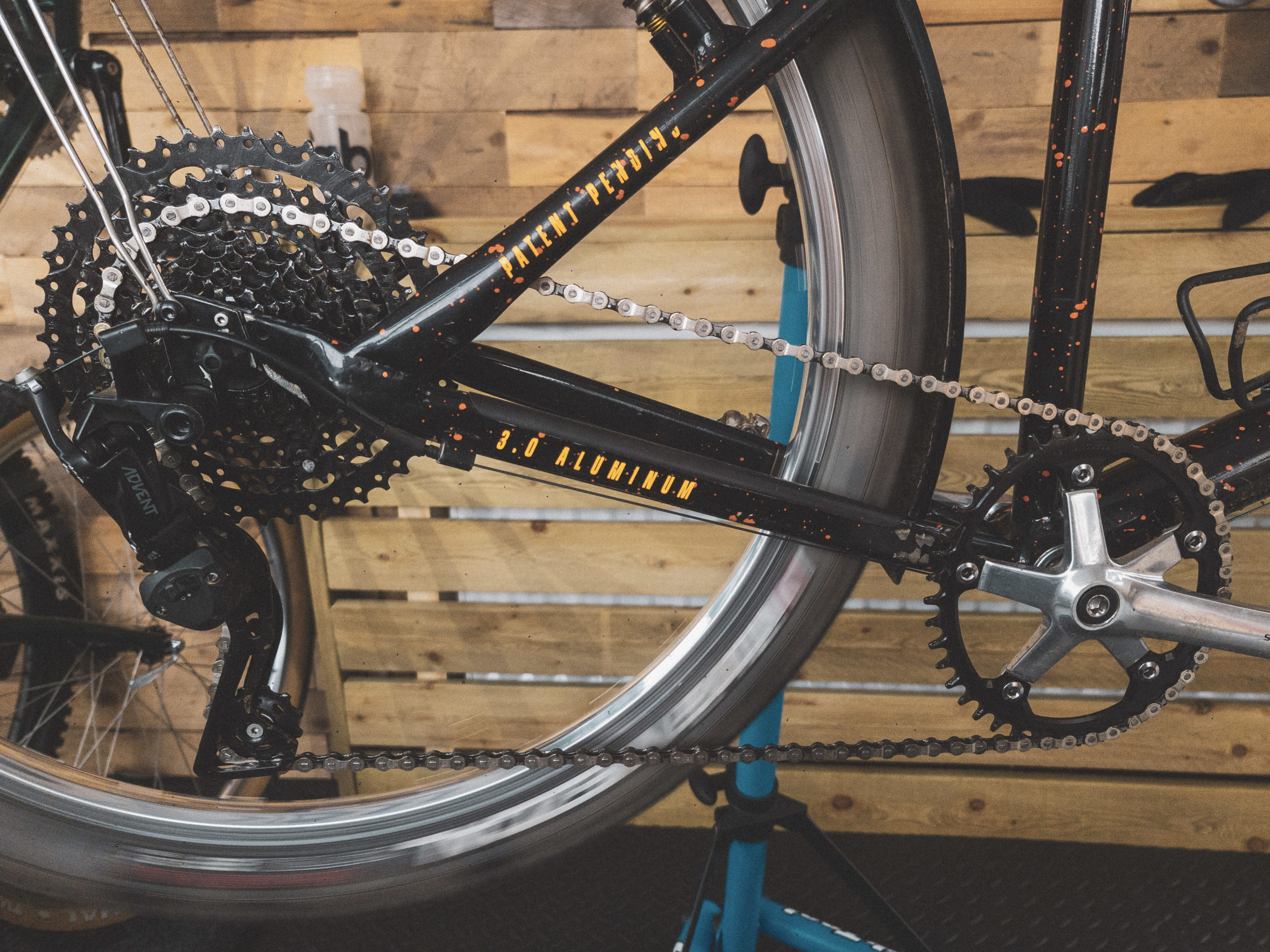 So, gearing. I’m going to be doing a test run to see if my smallest gear is enough to get me up with loaded basket 151 times, though I may need to go a size or two down on the chainring.

I’m currently running 1×9, with an 11-46 on the back and a 42T chainring. Normally it will get up anything but the bike is not going to be light, so I may drop down to a 38T on the front if necessary,  though ideally I’d like to not alter the bike at all!

I’m not sure whether you can call it tactics, but it’s going to be a case of granny ring and spin. I’m not out to set any records so if I can work aerobically as much as possible, that’s the goal. Just don’t bonk!

In terms of food I’m going to eat as much as possible, snacks and generic riding food as I go, and I’ll take some solid food with me for breakfast, lunch and dinnertime. I can’t just live on Soreen!

I’ve also fitted a bottle cage to each basket strut to maximise easy access water, and I’ll put a big hydration bladder in the bag to save carrying a ton of extra bottles, though I may still need a few.

Whatever Active Root I have left will go in the bottles as its fabulous, and I’ll add salt and sugar to the water in the bladder, as nothing helps me hold cramp at bay like that cocktail!

How can we support your efforts? 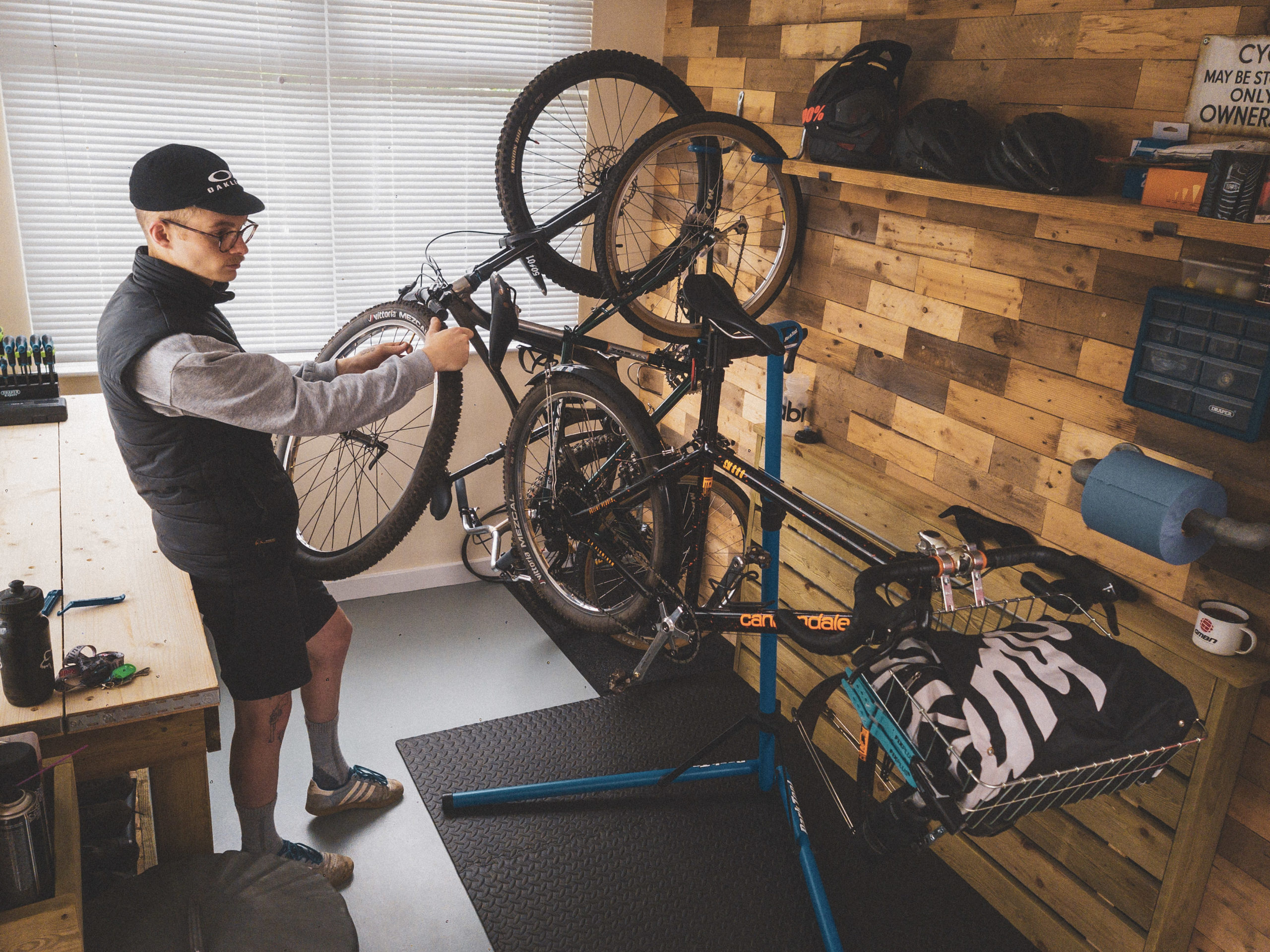 Joel’s new workshop is home to his business Wayfarer Cycles

There’s a link to the Movember donation page, any donations should be made there directly.

If anyone local donates and sends me a screenshot, they’ll be entitled to a free bike service from me too!

Will there be ‘coverage’ on the day?

I’m hoping so, though probably nothing professional!

At a minimum it will be me posting pain face selfies all day, though I’m hoping to get a couple of photog friends down to possibly shoot a little something to share after the pain is over!

You can follow Joel’s challenge on Instagram here, which starts in a week’s time at midnight on Saturday 28th November.

Just glad it’s him and not you? Why not donate to show your support?