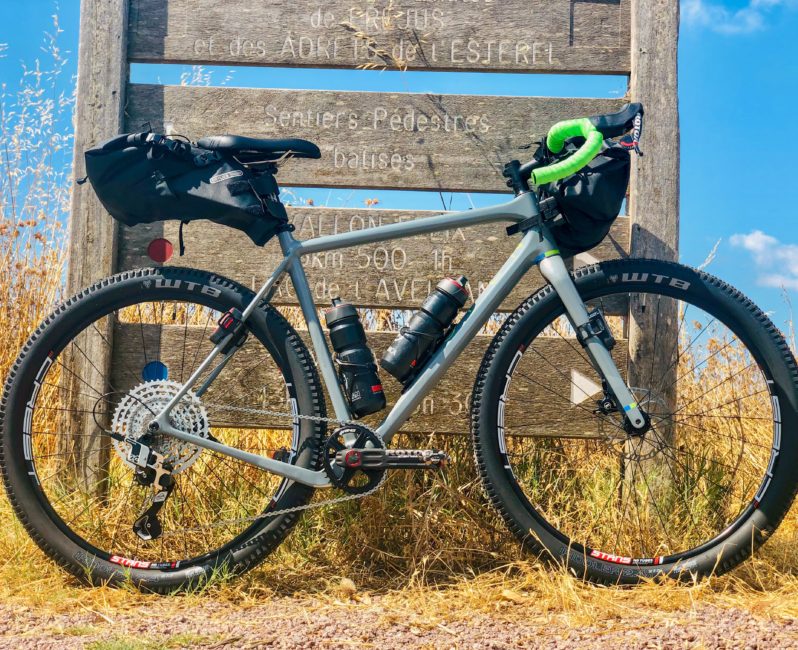 If you have even a passing interest in endurance cycling, you will probably have heard of Axel Carion, founder of the BikingMan series,  with whom we caught up in February.

Preparation for his next big BikingMan event, Inca Divide #3 will not begin until mid-August, so he has a bit of time to kill. Never one to let a riding opportunity go to waste, he has decided to have a crack at The Peruvian Great Divide while he can.

He flew out to Peru, with his ride partner Jonas Deichman, on the 19th July. They plan to complete the 1,500km ride on gravel bikes. Oh yes, and as if that is not enough of a challenge, they want to do it in a record time too!. 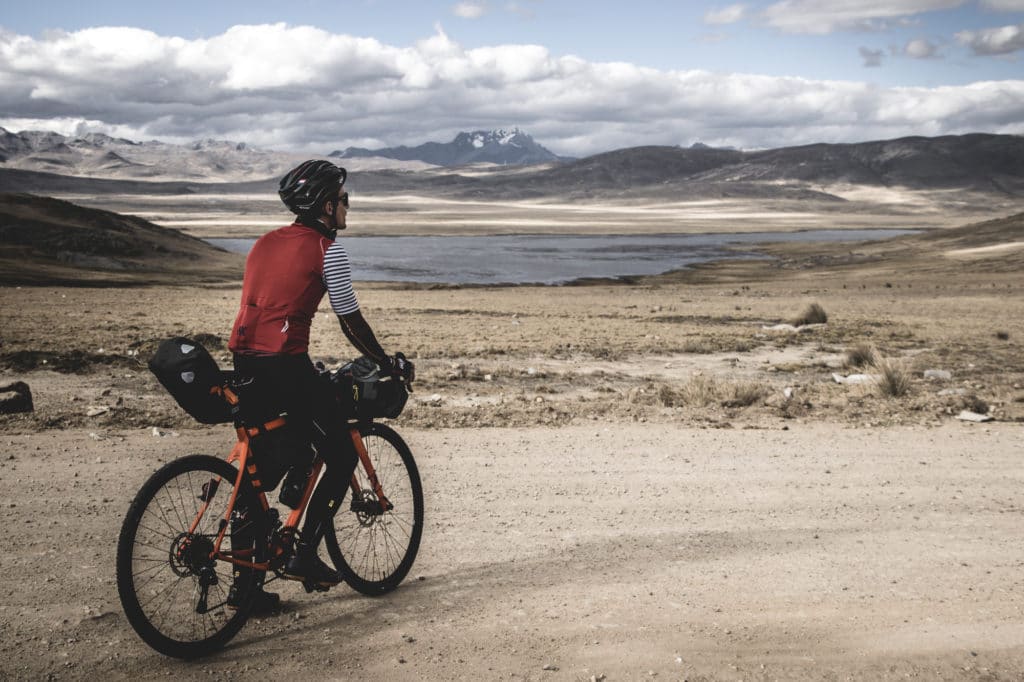 Axel Carion. Taking a breather on one of his previous adventures.

Ultra endurance riders will tell you that completing massive rides is as much a mental as a physical challenge. They will also wax lyrical about the scenery and wildlife, especially if they are riding somewhere really exotic. The trouble is, interesting and vibrant as they may seem to the narrator, their tales are often one dimensional to the listener. Well, fear not, Axel has everything in hand.

When he rode a segment of the Peru Divide in 2018, he was blown away by the spectacular landscapes, the flora, fauna and the Andean lifestyle. The experience inspired him not only to complete the whole ride this time, but also to compile a film and pictorial journal to complement his traveller’s tales.

With 40 mountain passes of over 4,000 metres, a mountain bike would probably be better suited for this challenge. Indeed, Axel described using a gravel bike for the Peruvian Great Divide “as crazy as taking a Ferrari to the desert!”

There is method in his madness though. When he told us what he was going to ride, it all began to make sense.

Axel’s bike sits at the very extremes of what you would normally associate with a ‘gravel’ bike. As it can comfortably accommodate a 650B x 2.4″ tyre, the OPEN WI.DE seems to be more of a drop bar mountain bike than a gravel bike. 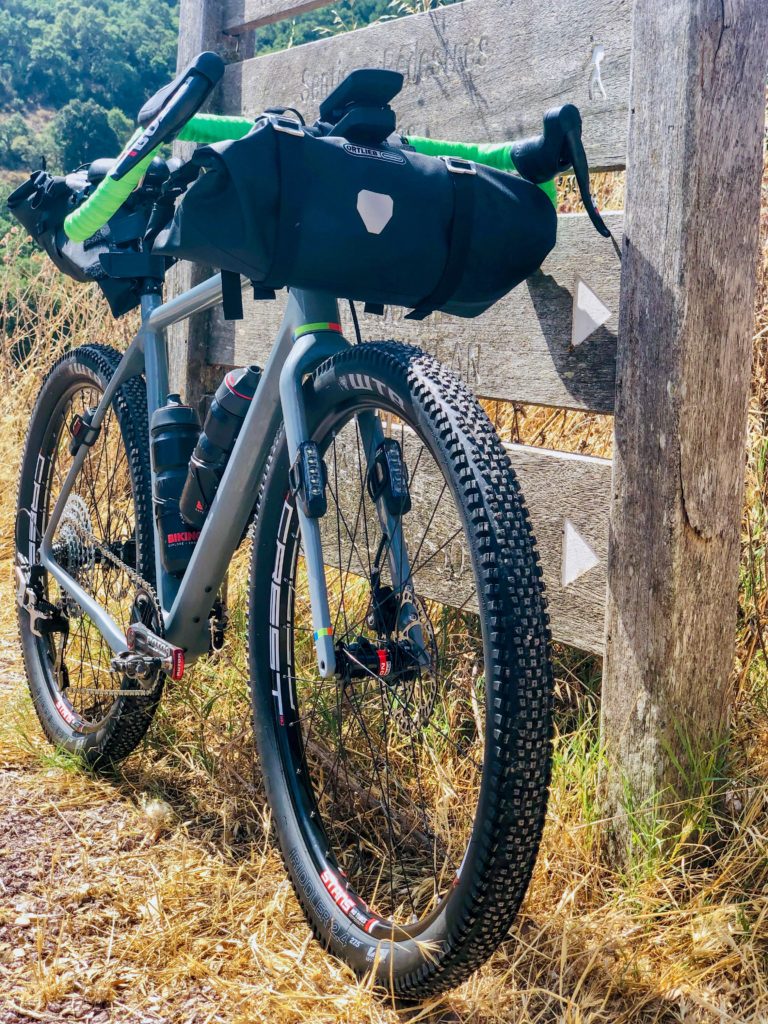 In the shakedown stage of bike prep. This OPEN WI.DE is going to see some huge climbs…

The now ubiquitous dropped chainstay was first seen on the UP. At the time the idea was radical but it allowed designers to work with wider tyres and shorter wheelbases.

The designers at OPEN have now taken the next logical step, and the WI.DE features two dropped chainstays! Apart from facilitating the use of even wider tyres, the double dropped chainstay precludes use of a front mech altogether. At the risk of stating the obvious, the WI.DE is 1x or nothing!

The bike is an absolute killer! 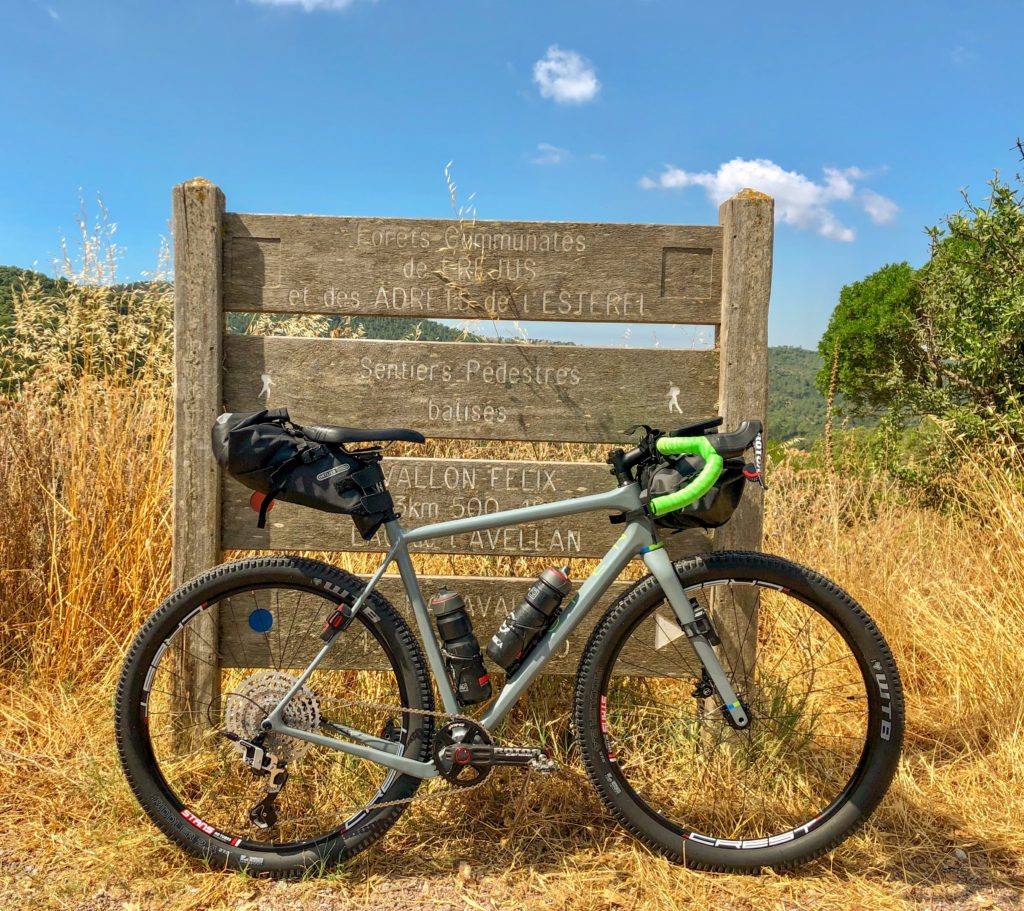 Our photos were taken before Axel flew out to Peru when he was still undecided about the final setup. One thing we know for sure is that he will be using Ortlieb luggage. He cites the choice as a ‘no brainer’.

Ortleib are hugely respected among ultra distance athletes not least because they are truly waterproof. 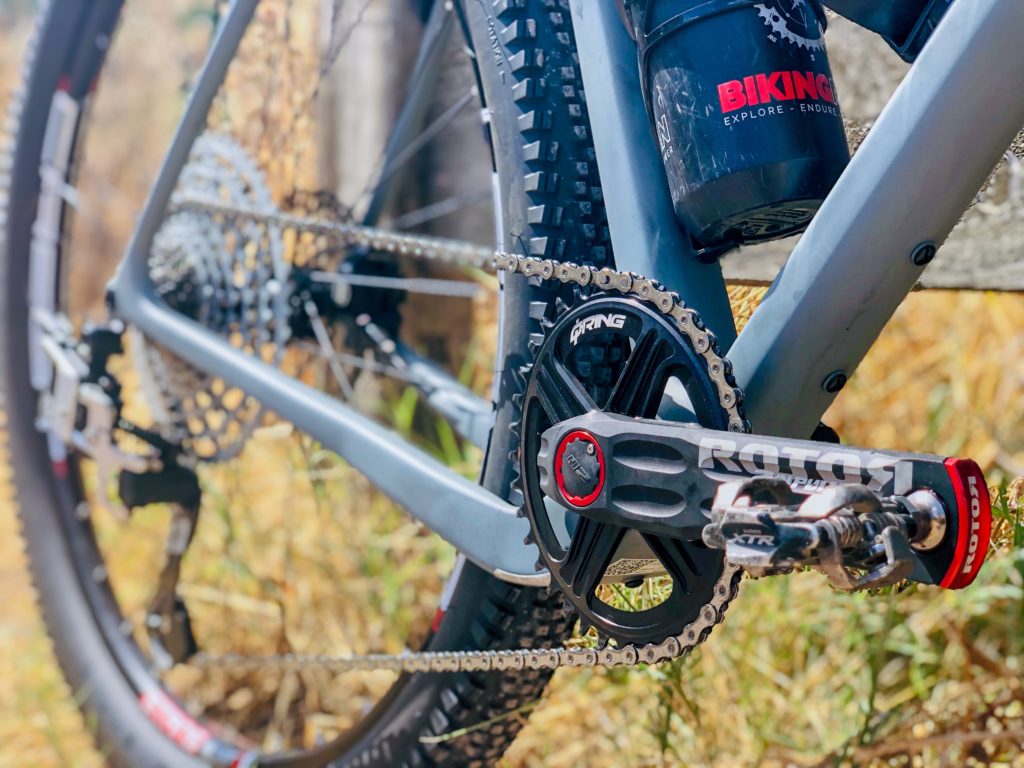 Axel is running a ROTOR 2inPower power meter to keep tabs on his performance throughout the expedition. 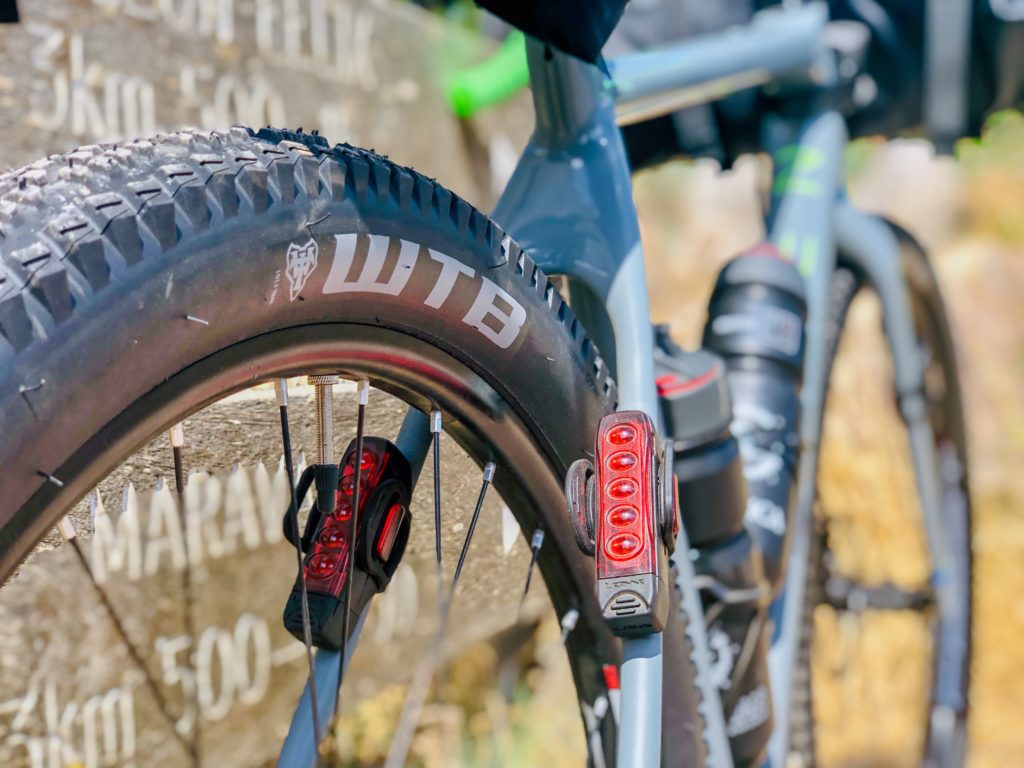 Made for mountains. WTB Riddler 2.4 rubber will provide the bite.

Considering the remoteness of the Peruvian Great Divide, reliability is everything. You can not understate the importance of having components you are completely comfortable with.

For Axel, this means the hydraulic ROTOR Uno groupset.  Interestingly, he will be using a custom 12 speed cassette, rather than the normal 13 gears. With all these massive mountain passes to get through, the choice of a 36 tooth chainring and an 11-52 cassette seems eminently sensible. 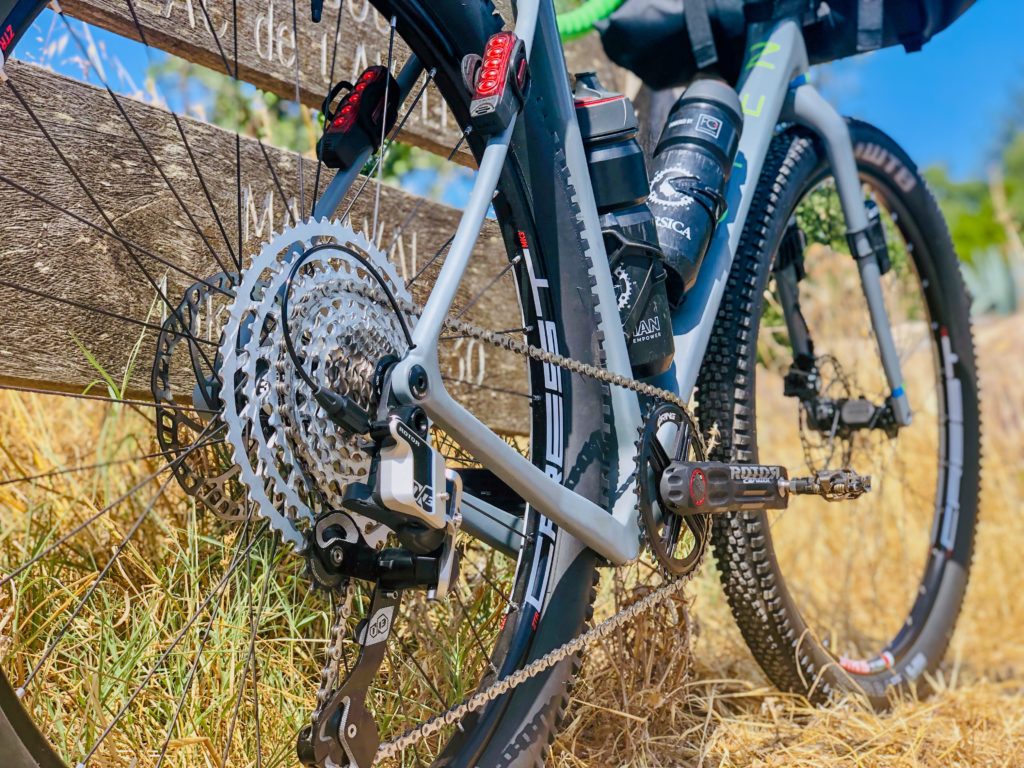 Braking duties are entrusted to Magura MT-8 disc brake. More commonly found on mountain bikes, they should be powerful enough, to slow down the loaded OPEN WI.DE on those mountain descents. 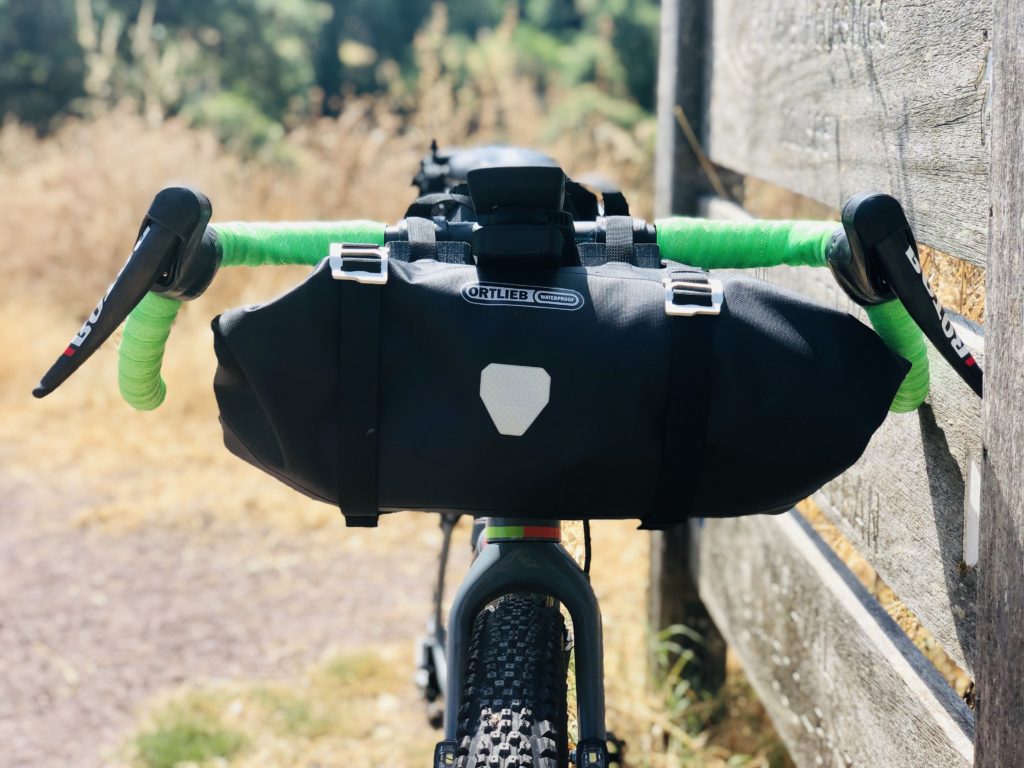 Ortlieb bikepacking gear will keep everything dry whatever the weather.

Axel and Jonas are out on the route right now and you can follow them as they attack the Peruvian Great Divide via the BikingMan website.

Keep an eye on Axel’s Instagram feed for some epic photos from their journey too!

This one features their Appelblauwzeegroen house finish, a two tone sea green fade. Do you rate it?

New prize alert! 🚨 Enter our AUTMNL ADVNTR photography challenge to be in with a chance of winning one of these brilliant Canister Bags from Yorkshire-based Restrap. ⁠
⁠
These handy little 1.5L bar bags are perfect for an extra layer, tools, electronics and of course snacks for day rides. ⁠
⁠
Link in bio for more on the challenge and how to get involved. ⁠
⁠
#ADVNTR #gravel #bikepacking #bikepackingbags #restrap #autmnladvntrs ...

“My name is Pi Manson. I believe in DIY punk, fun bikes, and truth to materials. I want local, handmade bikes and parts to be as accessible as possible. I leave my fillets un-filed. They show the process, the maker’s marks. A raw fillet is honest and utilitarian, beautiful as it is.⁠
⁠
My custom components have featured on award winning show bikes, been ragged by hard working messengers, and abused on long bike tours. My bikes are strong, fit for purpose, utilitarian, beautiful.”⁠
⁠
Enjoy the Clandestine.cc story from Pi, thanks to this beautifully made short film passion project, on ADVNTR now (link in bio).⁠
⁠
📸 DomJohn_DOP⁠
#ADVNTR #gravel #bikepacking #framebuilding #framebuilder #straightfromthetorch ...

Here's one cadence_images took earlier... have you been getting out by bike to take part in our AUTMNL ADVNTR photography challenge?⁠
⁠
Remember to tag your autumnal shots with #ADVNTR to enter 🍁⁠
⁠
#AUTMNLADVNTRS #autumn #fall #changingseasons #bikepacking #gravel ...

Conceived for riders looking for *even* more of a challenge than the Dirty Reiver (200 km), or those looking for a supported coast to coast challenge with a twist, the Frontier300 is back for 2021 on the 12th June.⁠
⁠
Totalling 300 km of road and gravel from the west coast of Scotland to the east coast of England, the Frontier 300 links up the Borders’ finest forests and gravel sectors. The sands of Druridge Bay will be home to the SalsaCycle’s Finishers Party, as well as brunch on the beach.⁠
⁠
Is this the challenge you need to look forward to next year?⁠
📷 cadence_images
⁠
#ADVNTR #gravel #bikepacking #frontier300 #scottishborders #coasttocoast ...

Round-the-world cyclist and serial adventurer Vedangi Kulkarni (wheelsandwords) is no stranger to riding through 'bad' weather. Not phased by the rapidly changing seasons, Vedangi's latest challenge, a 1000 kilometre loop of the South-West of England starts this weekend, from her front door in Christchurch, near Portsmouth.⁠
⁠
In preparation for her trip (more on that here soon), Vedangi shares her five best nuggets of wisdom for getting out there and still making the most of autumn and winter adventures.⁠
⁠
Read at ADVNTR now (link in bio)⁠
📸 Callum Howard⁠
⁠
#ADVNTR #gravel #bikepacking #biketouring #autumn #winter ...

Can you guess where we've been today?
#framebuilder #deepcustom #straightfromthetorch ...

Announcing more prizes in the line up for our #AUTMNLADVNTR photography challenge; three 3Point Cycling Camera Straps from Aussie skingrowsback. Designed to keep you comfortable while riding with your camera easily accessible, could this be the perfect riding accessory? ⁠
⁠
Go to ADVNTR.cc to read how you can get involved this October for the chance to win one! ⁠
⁠
#ADVNTR #gravel #bikepacking #skingrowsback ...

The transiberica Badlands: 720 kilometres with 85% off road, and 15,000 metres of climbing, including the highest paved mountain pass in Europe, Pico del Veleta.⁠
⁠
MarcusNicolson took on the challenge as his first bikepacking race, and soon learnt just how tough these events can be. The Sierra Nevada is certainly a bit different to Scotland... ⁠
⁠
Read Marcus' full account on ADVNTR.⁠
⁠
📸 juananfotografia & biziosona⁠
⁠
#ADVNTR #gravel #bikepacking #transiberica #badlands2020 #ultracycling #ultradistancecycling #sierranevada ...

Getting out to capture those AUTMNL ADVNTR shots this weekend?⁠
⁠
We chatted to one of the photography challenge's judges and the inspiration behind the idea, cadence_images, about why he loves riding and shooting photographs in the changing seasons, his top photography tips and what he's been enjoying about #AUTMNLADVNTR so far.⁠
⁠
Read the interview on ADVNTR now.⁠
⁠
#ADVNTR #gravel #bikepacking #photography #getoutside #exploremore #autumn #fall ...

Our thoughts on templecycles' flagship Adventure Disc 1 are now up, complete with a corking route for you to try across the Quantock Hills.⁠
⁠
We got to know the small, Bristol based team behind the classically styled bicycles, and found out that they ride very differently to how they look...⁠
⁠
Read now at ADVNTR (link in bio)⁠
⁠
#ADVNTR #gravel #bikepacking #templecycles #adventure #adventurecycling #touring ...

New favourite bar tape for our ADVNTR Editor? This is the BrooksEngland Cambium rubber bar tape on the TempleCycles Adventure Disc 1 that katherinebikes has been reviewing lately.⁠
⁠
Plenty of 'cush' with a cosy 3 mm thickness and grippy even in the wet, with subtly embossed bar end plugs, although we'd swap out the finishing tape for something more durable.⁠
⁠
What's your favourite bar tape? ...