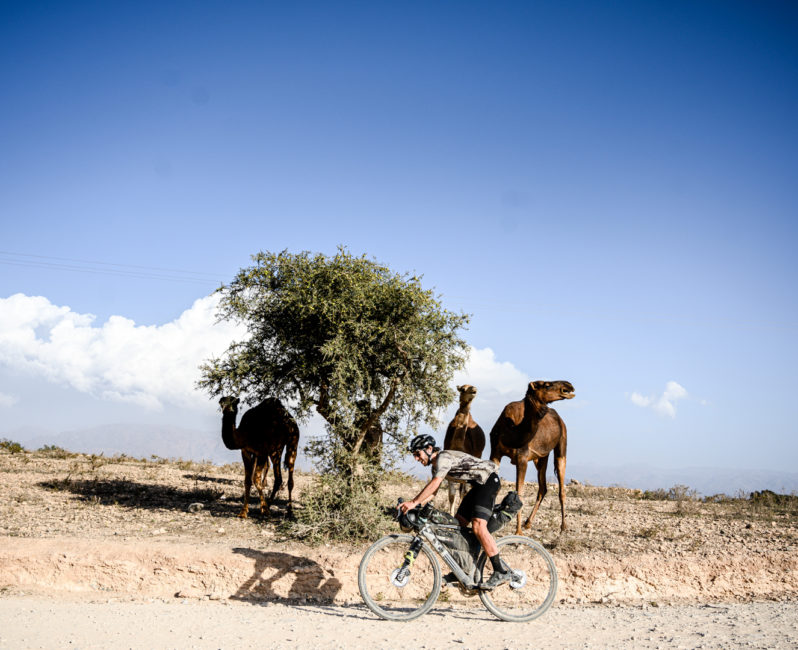 One of the very few bikepacking races on the 2020 calendar is back for its second edition in early 2021; the Atlas Mountain Race. Entries are now open for solo riders and pairs, but will you be taking on the challenge? 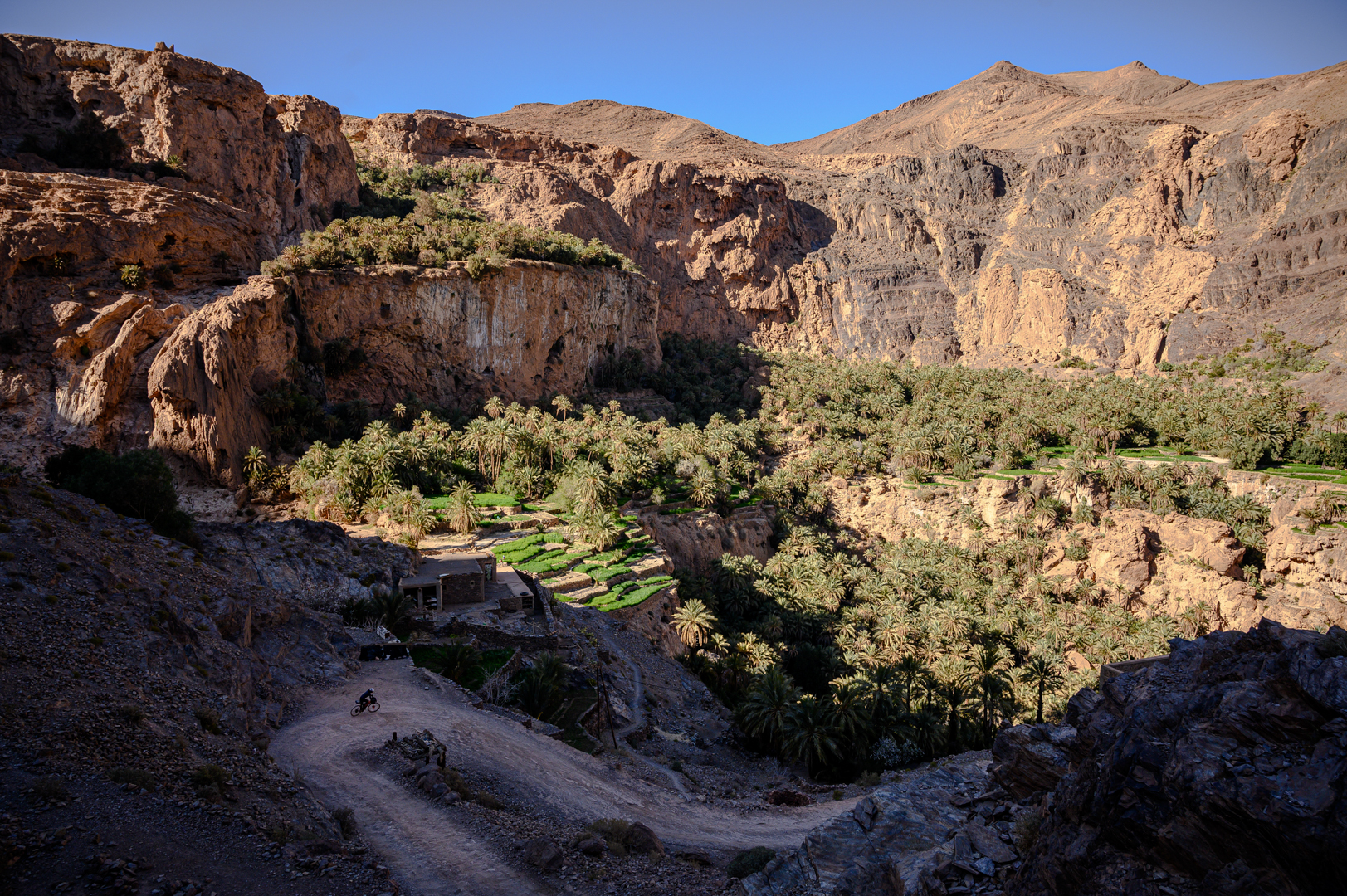 Starting on the 6th of February, the riders will need to follow the set route through three staffed control points to the finish, covering more than 23,000 metres of climbing (75,460 ft). As you’ll see from the video below, the way is anything but smooth, with around 80% of the route off-road.

The inaugural 2020 edition was attempted by 192 riders, won by Sofiane Sehili (3 days, 21 hours, 50 minutes) with Jenny Tough placing as first woman finisher. Riders will need to complete the route in just 8 days to make the finisher’s party. PedalED, komoot and Canyon are sponsoring the event for 2021.

Check out the race report by Nigel Leech on ADVNTR, our interview with Shona and Rich from Keep Pedalling ahead of the race, and Quinda’s reflections on the race at I-ris.cc. 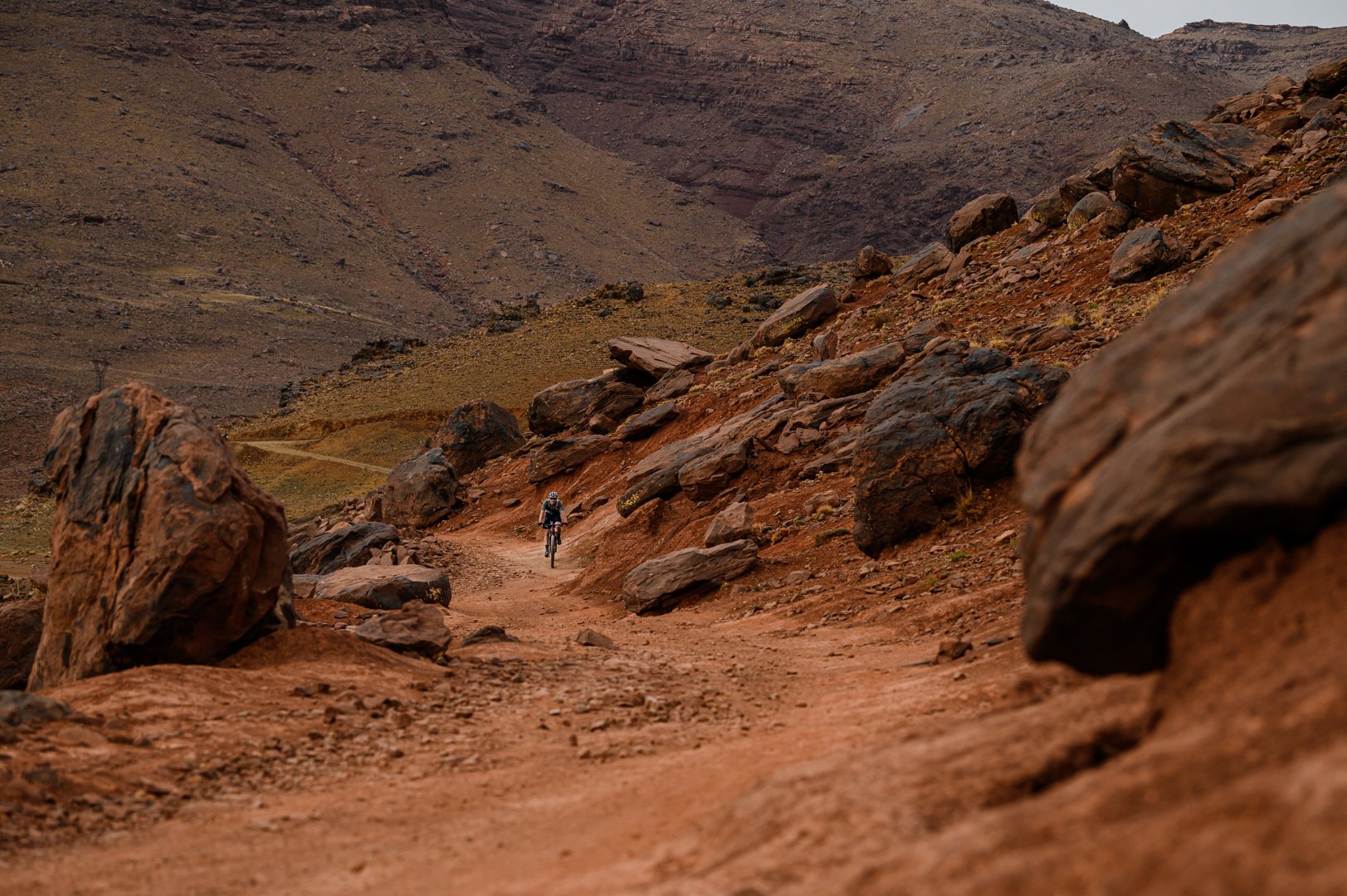 Check out the full, detailed route for 2021 here on komoot. The route remains largely the same as the first year, although the finish point is a little further north along the coastline in Agadir, to better accommodate finishing racers. Expect broken roads, old colonial pistes and plenty of hike-a-bike.

You can find the entry application here, which is open until 30th of October at midnight. Successful entries will be confirmed on the 7th November.

Want to see more? Check out Into The Rift, the film made of last year’s race.

Fingers crossed for a place. I’ve been planning how I can time it so that I ride all the bits I rode in darkness last year in the daytime for round two. Such an amazing experience in every way.

2020 has been rather different for pro MTB photographer SaskiaDugon, with her normal schedule of a summer on the World Cup circuit with her dog Trigger totally rewritten. All was not lost though, as some summer months back at home in the Brecon Beacons of Wales turned out to be a marvellous change.⁠
⁠
We caught up with Sam during the AUTMNL ADVNTR challenge to chat about her changing perspective on the seasons, and why autumn might just be her new favourite time of year.⁠
⁠
Link in bio.⁠
⁠
#ADVNTR #gravel #bikepacking #AUTMNLADVNTR #photography #autumn ...

The Bear Bones 200: an infamously brutal 200 km ride hosted in a different area of Wales each year.⁠
⁠
Chris Lansley (bearlegged) took on the challenge for the first time, this year ridden as a solo ITT rather than a mass start, and shared his experiences, moody photographs and small frustrations (don't mention sheep or gates to him) with us.⁠
⁠
Read now at ADVNTR.cc (link in bio)⁠
⁠
#ADVNTR #gravel #bikepacking #bearbones200 #bb200 #walesneverfails #breconbeacons #hiraeth ...

This one features their Appelblauwzeegroen house finish, a two tone sea green fade. Do you rate it?

New prize alert! 🚨 Enter our AUTMNL ADVNTR photography challenge to be in with a chance of winning one of these brilliant Canister Bags from Yorkshire-based Restrap. ⁠
⁠
These handy little 1.5L bar bags are perfect for an extra layer, tools, electronics and of course snacks for day rides. ⁠
⁠
Link in bio for more on the challenge and how to get involved. ⁠
⁠
#ADVNTR #gravel #bikepacking #bikepackingbags #restrap #autmnladvntrs ...

“My name is Pi Manson. I believe in DIY punk, fun bikes, and truth to materials. I want local, handmade bikes and parts to be as accessible as possible. I leave my fillets un-filed. They show the process, the maker’s marks. A raw fillet is honest and utilitarian, beautiful as it is.⁠
⁠
My custom components have featured on award winning show bikes, been ragged by hard working messengers, and abused on long bike tours. My bikes are strong, fit for purpose, utilitarian, beautiful.”⁠
⁠
Enjoy the Clandestine.cc story from Pi, thanks to this beautifully made short film passion project, on ADVNTR now (link in bio).⁠
⁠
📸 DomJohn_DOP⁠
#ADVNTR #gravel #bikepacking #framebuilding #framebuilder #straightfromthetorch ...

Here's one cadence_images took earlier... have you been getting out by bike to take part in our AUTMNL ADVNTR photography challenge?⁠
⁠
Remember to tag your autumnal shots with #ADVNTR to enter 🍁⁠
⁠
#AUTMNLADVNTRS #autumn #fall #changingseasons #bikepacking #gravel ...

Conceived for riders looking for *even* more of a challenge than the Dirty Reiver (200 km), or those looking for a supported coast to coast challenge with a twist, the Frontier300 is back for 2021 on the 12th June.⁠
⁠
Totalling 300 km of road and gravel from the west coast of Scotland to the east coast of England, the Frontier 300 links up the Borders’ finest forests and gravel sectors. The sands of Druridge Bay will be home to the SalsaCycle’s Finishers Party, as well as brunch on the beach.⁠
⁠
Is this the challenge you need to look forward to next year?⁠
📷 cadence_images
⁠
#ADVNTR #gravel #bikepacking #frontier300 #scottishborders #coasttocoast ...

Round-the-world cyclist and serial adventurer Vedangi Kulkarni (wheelsandwords) is no stranger to riding through 'bad' weather. Not phased by the rapidly changing seasons, Vedangi's latest challenge, a 1000 kilometre loop of the South-West of England starts this weekend, from her front door in Christchurch, near Portsmouth.⁠
⁠
In preparation for her trip (more on that here soon), Vedangi shares her five best nuggets of wisdom for getting out there and still making the most of autumn and winter adventures.⁠
⁠
Read at ADVNTR now (link in bio)⁠
📸 Callum Howard⁠
⁠
#ADVNTR #gravel #bikepacking #biketouring #autumn #winter ...

Can you guess where we've been today?
#framebuilder #deepcustom #straightfromthetorch ...

Announcing more prizes in the line up for our #AUTMNLADVNTR photography challenge; three 3Point Cycling Camera Straps from Aussie skingrowsback. Designed to keep you comfortable while riding with your camera easily accessible, could this be the perfect riding accessory? ⁠
⁠
Go to ADVNTR.cc to read how you can get involved this October for the chance to win one! ⁠
⁠
#ADVNTR #gravel #bikepacking #skingrowsback ...