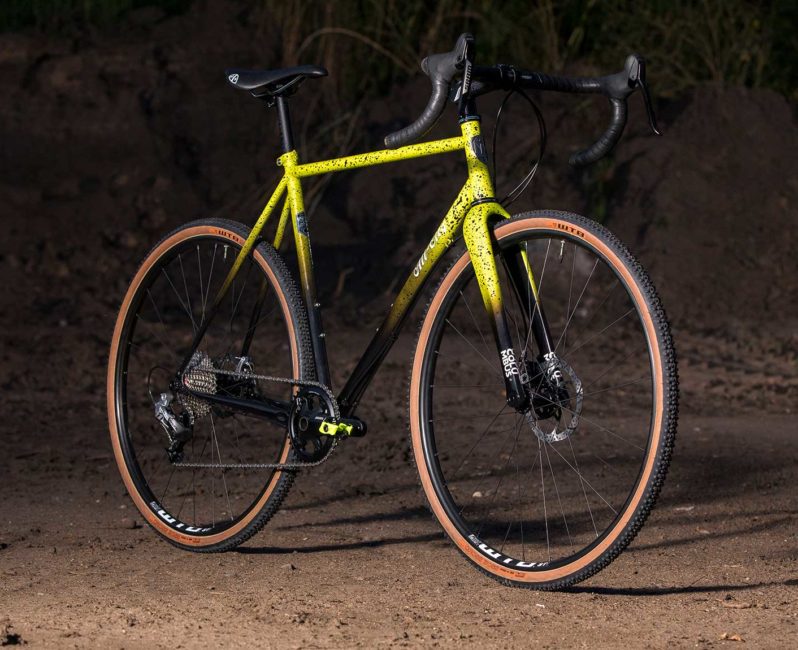 When the Macho King & Nature Boy email dropped into the ADVNTR inbox, it was obvious that All-City were on a winning streak. Knocking it out of the park again, the 2020 All-City Macho King and Nature Boy are resplendent in searing fluro yellow and green. They are definitely NOT for the shy and retiring! A quick glance at the spec sheet showed their beauty is more than skin deep. Under the fancy paint both bikes have received a major overhaul. Instead of the usual 612 Select tubing, All-City’s proprietary A.C.E (Air hardened, Custom designed & Extruded) steel is used. Paired with a Columbus Futura carbon fork with adjustable rake, All-City are bringing the steel ‘cross category into the 21st century. 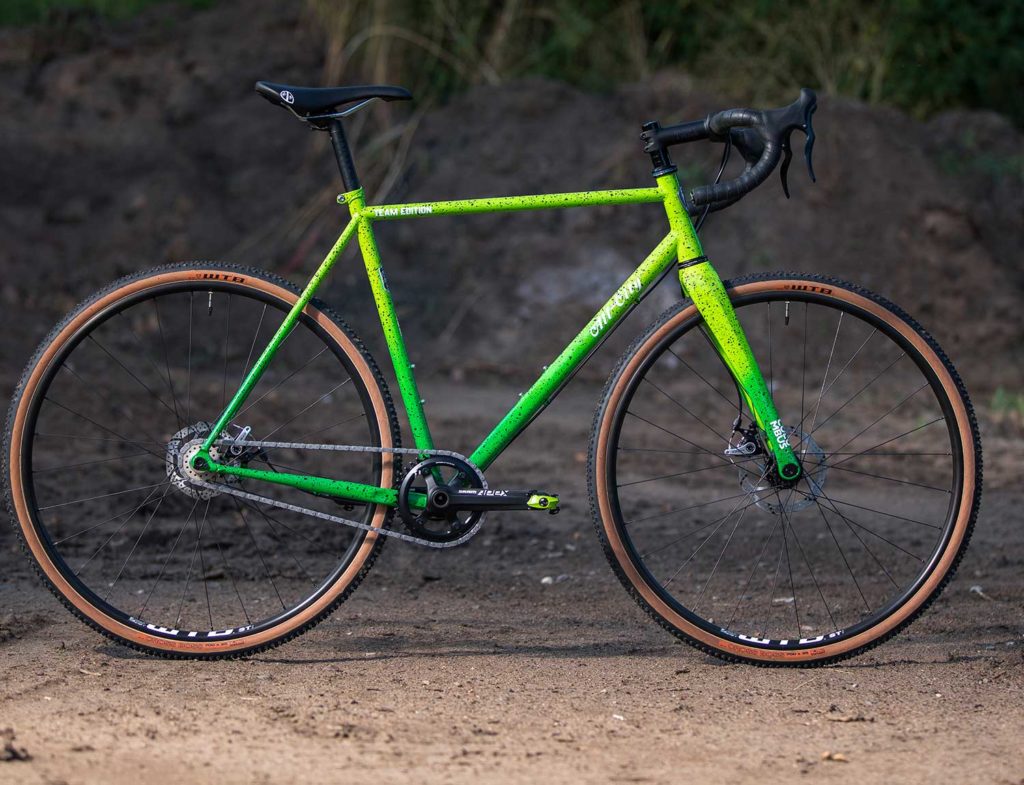 The changes go beyond new paint and pipework, as both models get a raft of modern upgrades. While primarily cyclocross racing bikes, the ‘King & Nature Boy have a lot to recommend them to riders looking for fast gravel bike. Forget about rack and guard mounts. But space for 42c tyres and two bottle cages will be appreciated on long rides away from the race tape. Flat mount disc brakes, 12mm thru-axles and a tapered head tube will keep braking and cornering forces in check.

One criticism of modern developments like tapered tubes, disc brakes and thru axles, is they almost always add weight. All-City have bucked this trend as the Macho King has dropped around 400 grams from its frame weight! All-City’s own staffer Nate has built up a Macho King weighing 17lbs! Of course the Nature Boy has also have benefited from this weight loss programme. And with the Nature Boy switching from a steel to carbon fork, further rewards can be had for the weight weenies amongst us! The move to thru axles means that the chain-tension duties are taken care of by an eccentric BB rather than track-end style dropouts. 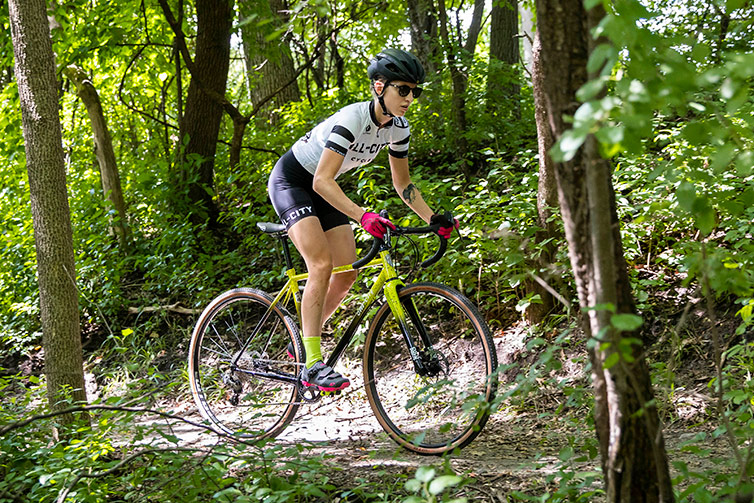 If it ain’t broken…

Thankfully All-City haven’t thrown the baby out with the bath water with their updates. Closer inspection reveals All-City design details remain. The signature cast drop-outs, seat tube collar and headtube badge with the AC emblem are all there.. Out of sight, the framesets are still protected from corrosion inside & out with an ED (Electrophoretic Deposition) coating. No reason then for your new All-City not to remain beautiful for years to come! 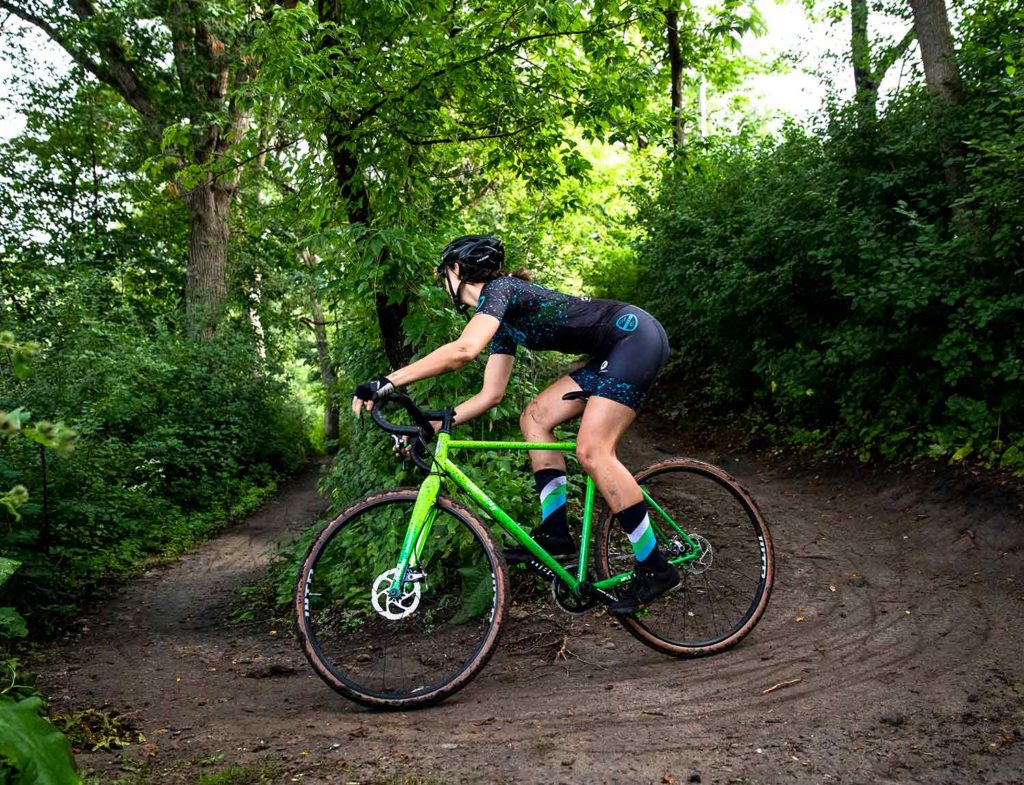 How low can you go?

That 17lbs Macho King is currently touring the UK with Nate as he visits key All-City dealers in the UK. We invited Nate to our local to talk over the finer details of the bike you see below. 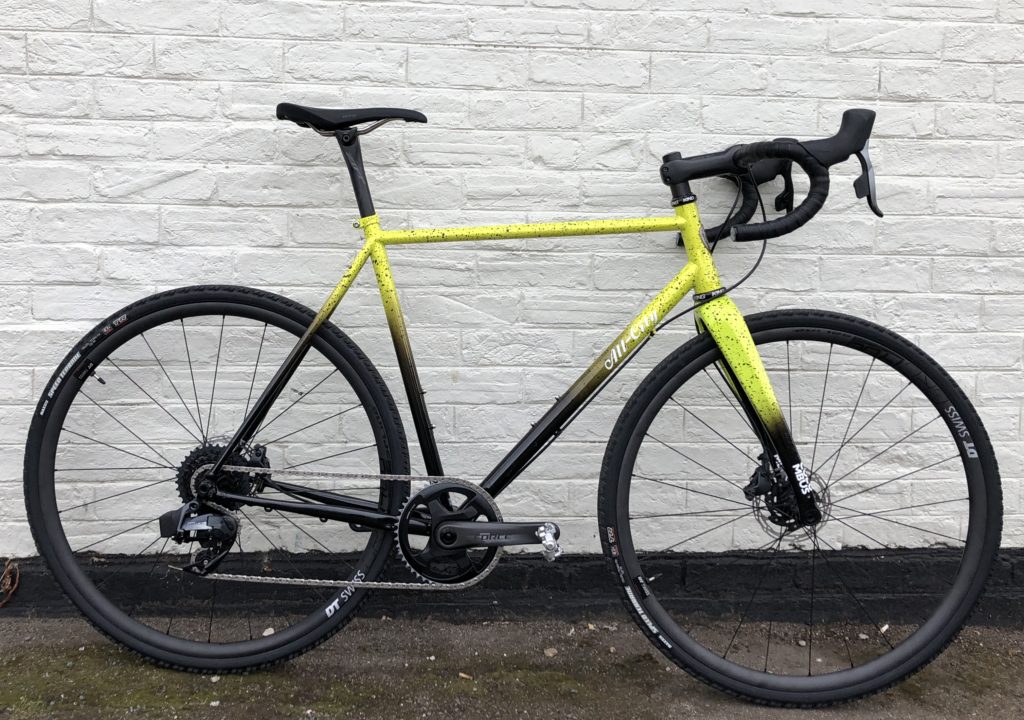 Featuring a SRAM Force AXS 12 speed groupset and a smattering of Zipp Service Course finishing kit, the build is topped off with DT Swiss CRC 1400 carbon wheels. 700x33c Maxxis Speed Terrane semi-slick tyres might be a little optimistic for a winter of cyclocross, but they can cover distance at speed. 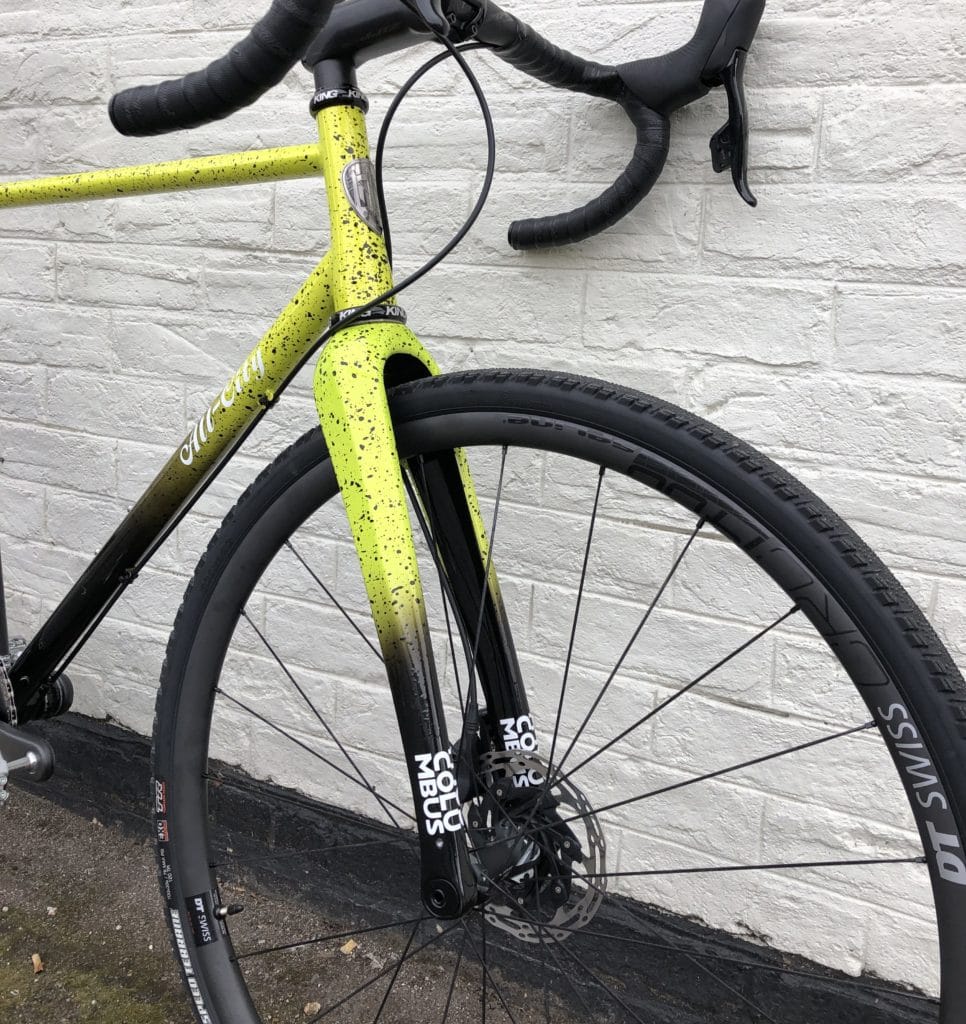 The age-old ‘pick up’ test of lifting up a bike to gauge its weight and thus prowess on the track, scores a full 10/10 with this Macho King. As light as most premium carbon builds, but with that special steel spring, it really feels special. 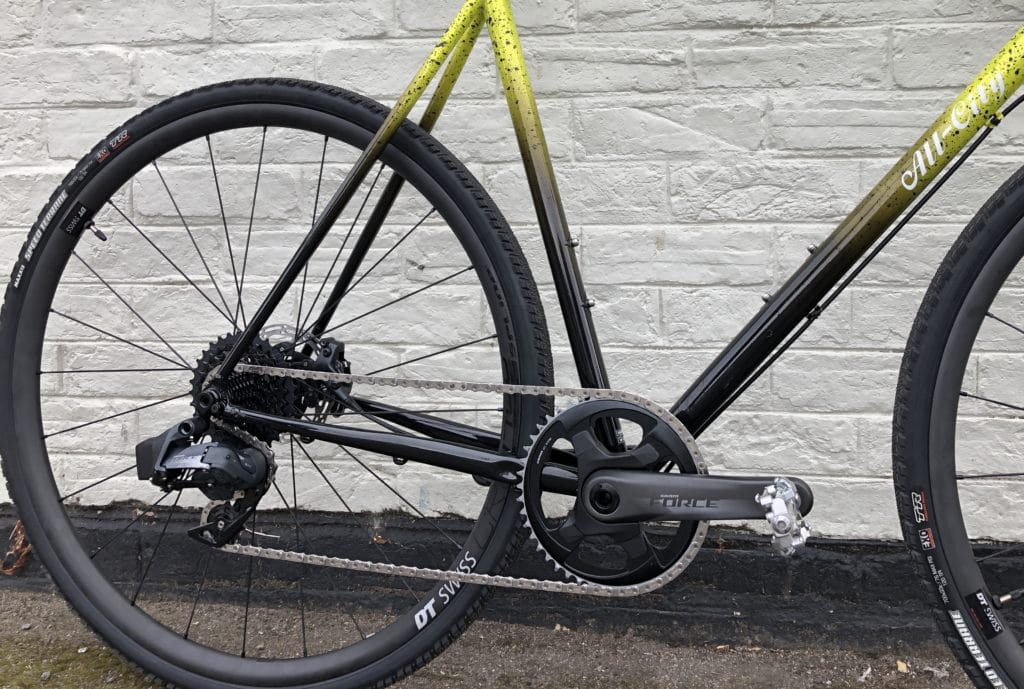 If you think you’ve got the legs to do the Macho King and Nature Boy justice head on over to the All-City website for the low down. For UK riders All-City bikes are imported by Ison Distribution who anticipate stock to arrive at their warehouse this December. 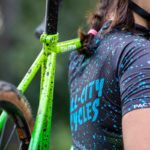 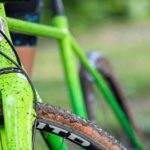 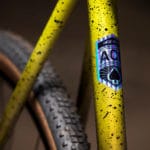 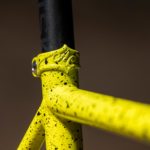 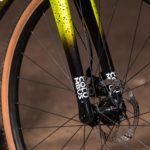 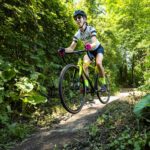 I purchased the 52cm frameset on the premise that it is light weight. It is not. I weighed the frame, without thru-axle and fork, it weighs nearly 2.2Kg. The fork (uncut) weighs around 0.52Kg without the thru-axle. How did anyone achieve a build @ 17lbs!?!? All city’s website states ‘We pulled a a 55cm for frame weights, which weighs ~1745g, with the frameset including axles weighing ~2379g. One size larger will add a little bit of weight, though nothing drastic!’ and ‘A 55cm complete bike is 21lbs on the nose’ This would be impossible with a 2.2Kg(4lb 10-13oz) frame and… Read more »

The build in the photos that Nate brought over from All City was firmly in the realms of ‘hero build’ territory and had a lot of expensive carbon dripping off it!

We can’t comment on the validity of the shop scales from which it was hung from, but it definitely felt light when passed around.

The frame seems nice quality, I can’t argue with that. But as I said above, All city themselves are stating a 55cm frame (without thruaxle, fork, etc) weighs ‘1745g’. How, when their 52cm weighs 2.2Kg?
I could spend hard earned £$¥€₽ on carbon bits, I doubt it would get anywhere close to 17lbs on a nearly 5lb frame…
Anyway, Rant over, thanks for your reply, just awaiting a reply from All-City for their take on this, but I have a feeling this frame may be going back to the shop.

I think the official line would be, the frames are wet painted and weights can vary 😀