The emerging sub-genres of the ‘gravel’ category are nothing new. Like road cycling and mountain biking that have come before, increasing popularity and diversity of approaches create a breeding ground for specialisation. The desire to create kit, bikes and accessories that have genuine USPs broaden the possibilities of what you can do with this equipment, and blur the boundaries of this middle ground between more well established (and dare I say it, more tightly regulated) cycling disciplines.

Some describe it as a spectrum, ranging between road cycling and mountain biking. For me, that’s a simplistic approach, as there’s truly so much more to it than terrain. I’ve been thinking for a while about how we might describe the off-road sphere, how we categorise bikes and associated equipment within it. Just because brand XYZ has launched a new ‘gravel’ shoe, doesn’t mean it’s going to be suitable for all riders, aspirations or niches within that category. To review them within the context of anything but the purpose for which they were designed and marketed would make little sense.

Many scrawled paper pages and online discussions later, my attempt at a simple, yet meaningful way to plot this challenge is taking shape. Let’s call it the Dirt Map.

The Dirt Map is a 2D scatter plot, with two axis. Running from left to right, the X axis (can you tell I’m a Bachelor of Science), you have the terrain axis. This is the most basic starting point, with ‘neighbouring’ disciplines of road and MTB at either extremity. So to the left you’ll find the silkiest, freshly laid black tarmac, and at the other end nothing less than a World Cup Downhill run.

A simplistic approach features terrain as the X axis.

The terrain axis is a pretty easy one to get your head around. Singletrack trail difficulty ratings increase as you move from left to right, or as Pannier.cc put it, by the particle  ISO 14688-1:2002 / Krumbein Scale classification. It goes something a little like this;

Roads, winter roads (the type with muck/gravel/dirt down the middle and prolific potholes), groads (light gravel roads), actual gravel roads, byways, bridleways, singletrack. Of course this is pretty UK-centric and realistically changes depending on where in the world you are, but you get the jist.

Therefore, if you’re plotting, let’s say bikes, along the terrain axis, the design on these changes as you move from left to right according to the conditions under tyre. We’re talking about the slackening of headtube angles, lengthening of wheelbases, increasing tyre clearances and knobblier tread etc. What about shoes? They get more suited to hiking and with less emphasis on absolute power transfer. Kit? Perhaps less about aerodynamics and more about range of movement.

So far, so good right? I feel like this is the generally accepted model. Where it gets a little more complex is the concept of duration, or as I introduce here, the distance axis.

Taking up the Y axis (top to bottom), the distance scale refers to the purpose for which that bike, piece of kit, or accessory is designed for in terms of ride duration. At the top extremity (or the north if you like) of our dirt compass, you’ll find things best suited to single day rides. Short jollies, local loops, simple, minimalist function.

Move down to the southern end, and you’re in the multi-day, or maybe even multi-month bikepacking or touring territory. Here you’ll find more bottle cage mounts (or as Bicycle Pubes likes to call them, ‘zits’) than you can shake a stick at, robust materials like steel and titanium, kit that’s built to endure and enjoy in comfort. 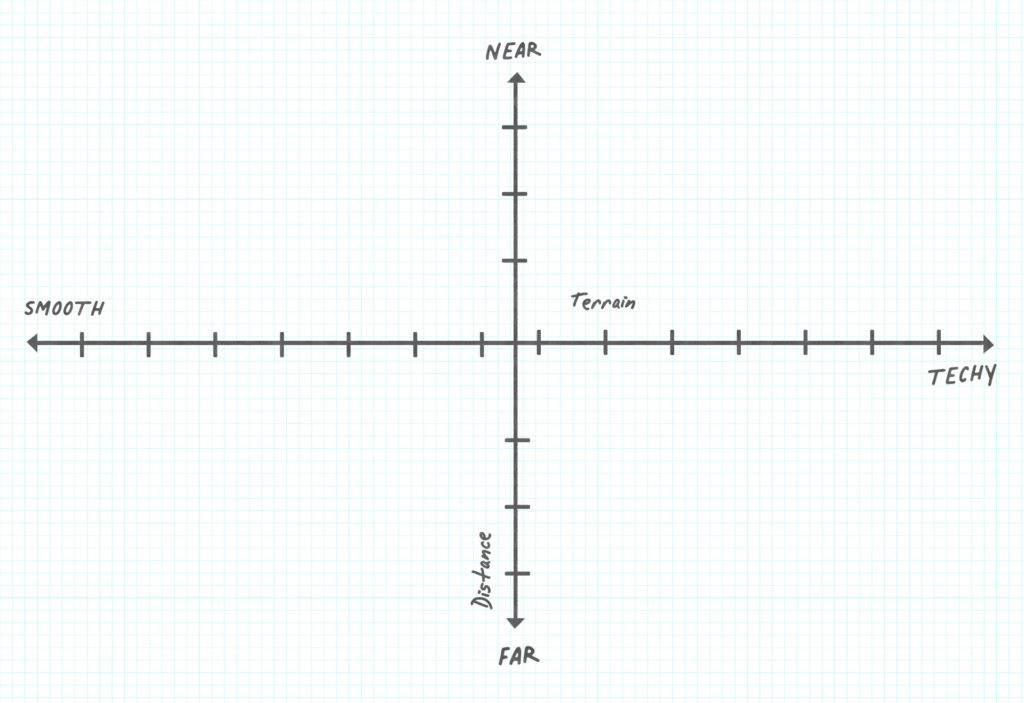 The Dirt Map; select any kind of ride, bike, kit or even attitude and I bet you’ll be able to plot it

Now we have more than a spectrum, but a scatter, a map. Many, many more possibilities than a simple linear scale, and more descriptive too. I don’t think absolute position on this map is important, but rather relative position in comparison to other points. For example, your personal X-axis of terrain that you like to ride might be from lanes to double-track, so you’ll have no need for an enduro whip at your eastern end.

How can we use this to categorise the off-road industry?

Let’s make this clear; I’m not trying to introduce some new industry standard here (God help us, we have enough of those). Allow me to indulge this concept as a way to make the sometimes confused expanse of ‘nouveau-gravel’ products make more sense to the everyday rider. As I said before, just because brand XYZ has launched a new ‘gravel’ shoe, doesn’t mean it’s going to be suitable for everyone across the Dirt Map.

Let’s take some examples, sticking to the dusty, dirty grey area between road and mountain biking. There’ve been a few suggestions for bicycle sub-genres within ‘gravel’, including racing-orientated gravel bikes, all-road bikes (pretty much endurance road bikes), adventure gravel bikes (or bikepacking bikes), and ‘hardcore’ (Gritfest organiser Matt Page’s label for the more MTB-orientated part of the category) or ‘monstercross’. Thinking about how each of these fit onto the Dirt Map, they’re generally easy areas to plot (although of course there’ll be a lot of variation within sub-genres). 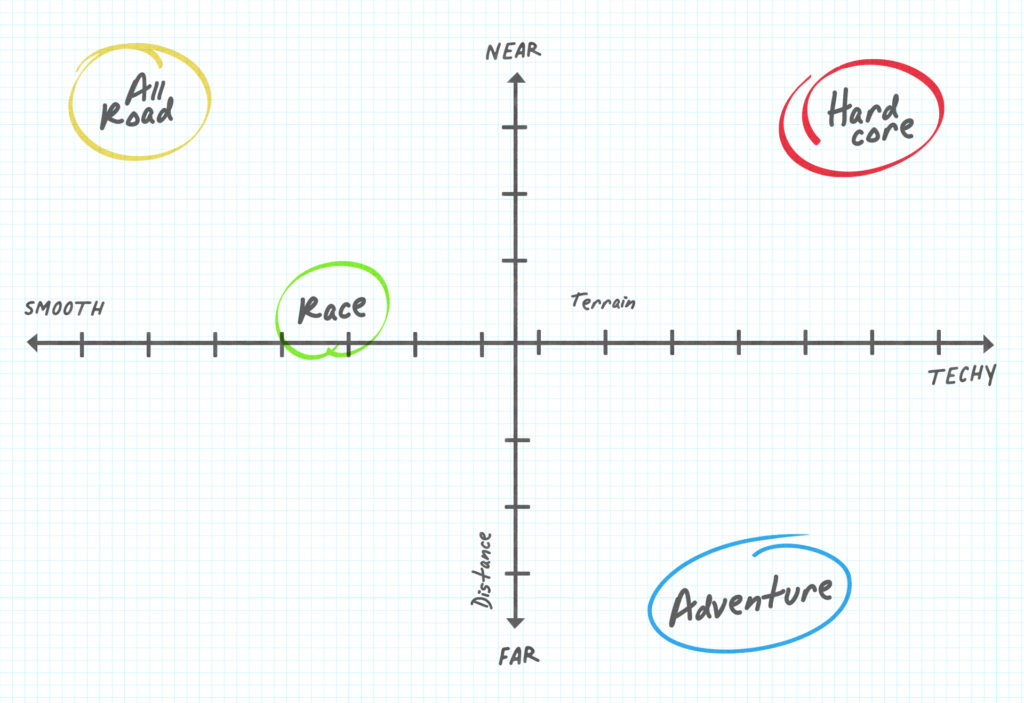 Interesting to think how some bikes might cast a wider plot than others; how more generalist designs that cater for both speed and longer distance capability (the new Specialized Diverge is coming to mind) would differ to a bike designed specifically for one purpose (e.g. the Trek 1120 bikepacking machine).

The Dirt Map can cover everything

The Dirt Map is more than just describing products, but events, rides and routes too. I recently shared a load of local gravel routes around Bristol and had some feedback from one person that one section was totally impossible on a gravel bike, even dangerous. Yet to me (and a whole heap of other riders), that was totally fine on a drop-bar bike. Perhaps if the grey area of ‘gravel’ was better defined, that misunderstanding could have been avoided.

What do you make of the Dirt Map? Do you think that we need a more structured way of conveying suitability of routes, events and products, or prefer a more casual approach? Let us know your thoughts in the comments.

We like! Might have to put something like this up in our shop and plot all the models we offer in it to help customers choose their perfect adventure bike 🙂

I think that’s genius. I worked in a shop through my yoof but took a little break whilst I stupidly thought I could run (and had a kid). Coming back after just 5 or 6 years and the industry has changed drastically, even for someone vaguely in the know.

As you say, it’s one of those things that’s hard to define, I’m happy flinging my bike down our local singletrack, but the terrain is relatively flat.Some bikes/kit are more aimed at a single purpose, some can handle a bit of everything, good place to start from though

Great idea, and could help many a newcomer to cycling chose a bike and what they might like to do with it. Even then though, there needs to be an understanding of exactly what each each place on the map means. Far to an experienced rider might be very different to a newcomers idea of far for example. An early season 200km Audax I rode last year had awful weather, rain, sleet, and about 2″ of snow on the highest bits of the route. Some people, (new to Audax, but not cycling), complained after that the ride was dangerous, and… Read more »

Yeah of course. For now I’ve left it deliberately blank; you could use it to compare broad cycling genres e.g. road vs MTB or choose to use it to compare a series of different gravel bikes, for example. Then it could be used to compare events also, or different shoes or kit. It would be impossible to add incremental points without narrowing it down to a single purpose I feel.