The Dirty Kanza is a focal point of many international riders’ gravel calendar, and at no less than 200 miles (actually a few more) it’s a serious challenge that requires a great deal of training and preparation. Former and current road racing and mountain bike pros battle it out across the flint hills of Kansas alongside keen amateurs and everyday cyclists alike, the usually sleepy town of Emporia transformed into a dirt rider’s mecca. 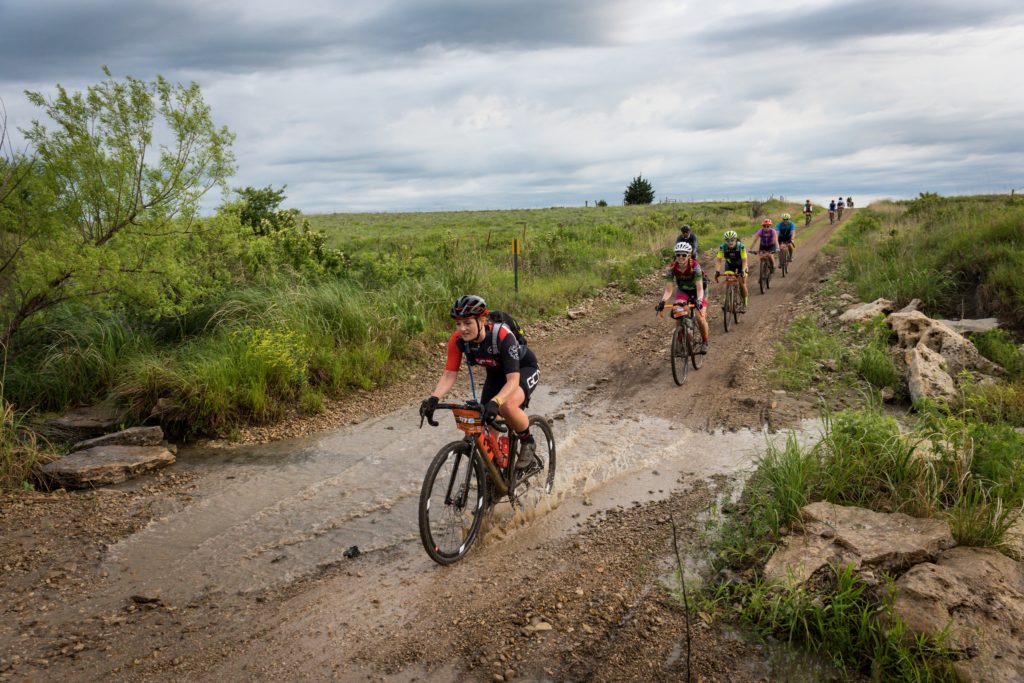 Riders from all over the world flock to Kansas for their endless gravel roads at the end of every May.

So when the 2020 edition of this world-leading race was postponed, retired WorldTour rider Laurens ten Dam and his pals at Live Slow Ride Fast (organisers of the LtD Gravel Raid and LtD Gravel Fest) came up with a whole new idea. Dirty Kanzelled was to rally riders all over the world to ride together, yet apart, on the original race date, each completing tough 100 or 200 mile dirt rides in their local territory. 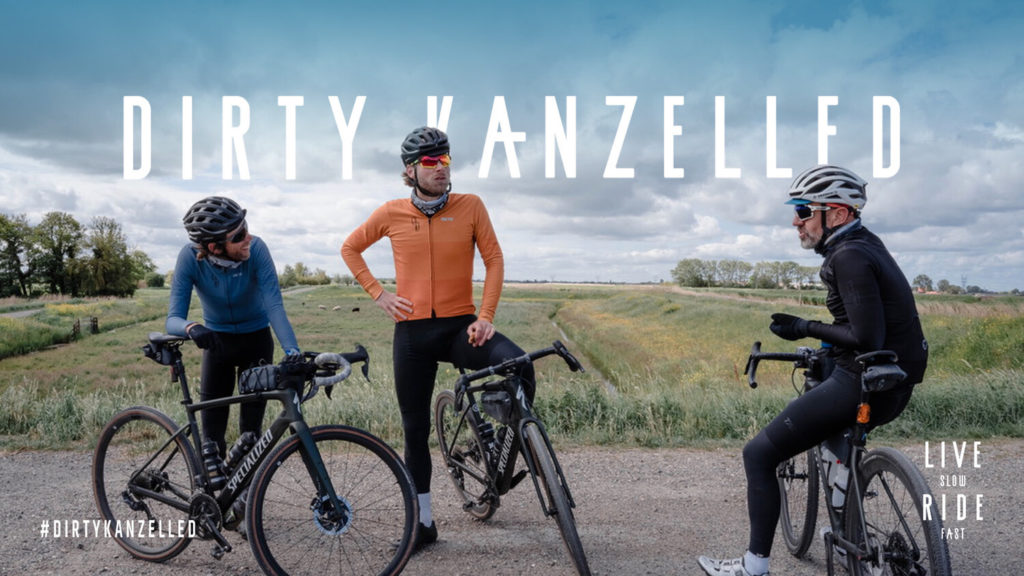 Laurens, Stevie and Dennis are the minds behind the Dirty Kanzelled concept and Live Slow Ride Fast.

The rules are simple. Ride 100 or 200 miles on 30th May, starting at 6am. You’re permitted a maximum of two rest stops for restocking on food and water, although you should be self-supported for the remainder. Ride within local C19 rules, solo, pairs or small groups if permitted, and most importantly make sure there’s an afterparty!

From a simple concept to riders all over the world taking part, a new kind of event was born. No, I’m not talking about yet another virtual Zwift group ride (yawn) but actually immersive, exploring, pushing limits, hot and dirty fun.

The relaxing of lockdown rules in the UK combined with a few evening beers made the concept of Dirty Kanzelled all the more appealing. Having been somehow anxious about longer rides this year, one hundred miles of dirt was just the carrot I needed to work on getting my confidence back, and enjoying big days out in the saddle again. Even if you’ve done long rides in the past (including the DK200 two years back), it doesn’t mean you keep that muscle for very long without flexing it.

The first task was route planning. I’m fortunate to know my local area and off-road trails pretty well after three years of exploration, and quickly settled on two long gravelly sections; the Strawberry Line which leads down to Cheddar and the old Roman Road, the Fosse Way. Only trouble was, these were at either side of Bristol.

I used this to my advantage to plan a mid-way stop back home. This would mean we could top up on water and use the toilet or dump a jacket, being totally self reliant and not having to visit any shops. Or so the theory went…

Out and back isn’t my usual style, but this route needed to be simple enough to feel achievable and take into account how busy these trails might be under current circumstances at weekends. We plumped for the narrower, potentially more busy Strawberry Line first, hoping to pass through before most people were even out of bed, and then the wider and less frequented Fosse Way later in the heat of the day.

How do you stow yours? 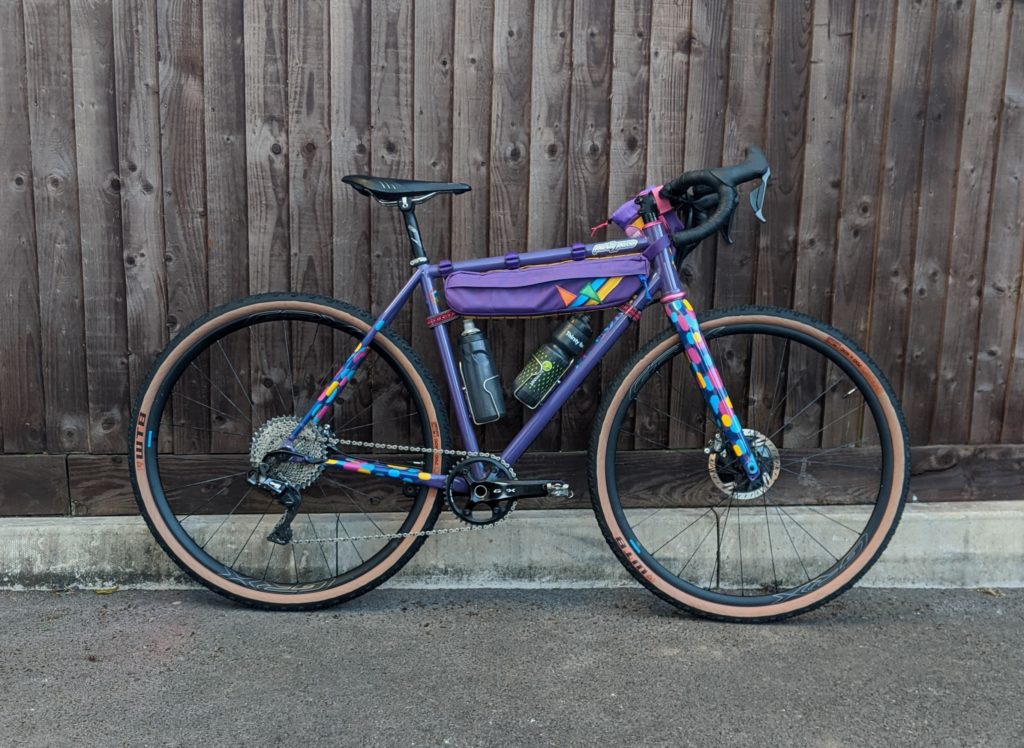 Bikes of the Bristol Dirty Kanzelled: Kathrine’s tool for the job.

Food-wise, we knew we needed to carry a lot. Both John, my partner, and I prefer ‘real’ food to gels and powders, and I always think that variety is the spice of life! My friends at Outdoor Provisions kindly sent a load of bars for the challenge, so I carried one of each flavour, then supplemented with loads of homemade rice cakes, biscuits and some savoury sandwiches. Beige on beige on beige. 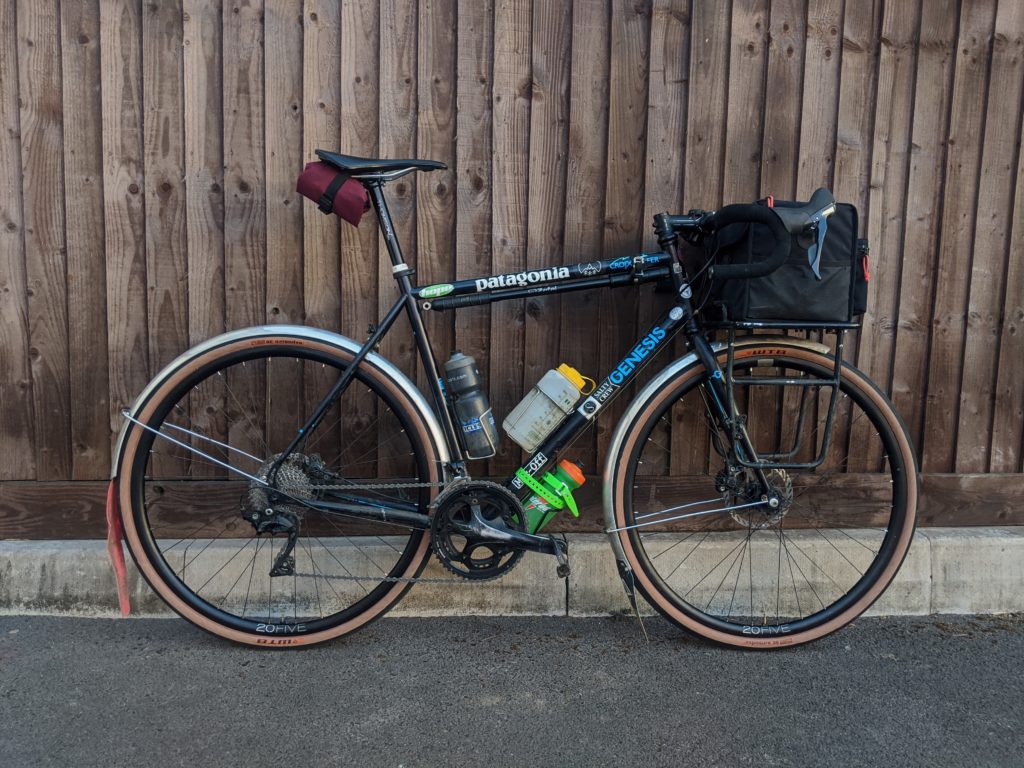 And John’s trusty Genesis, loaded up for 100 miles of prime ‘Zummerzet Dirty Kanzelled.

A bike wash, chain lube and brake pad check later, we were all good to go. Big pasta dinner, overnight oats in the fridge and lycra laid out next to the bed; all indicators of the kind of bike rides I’d been sorely missing. 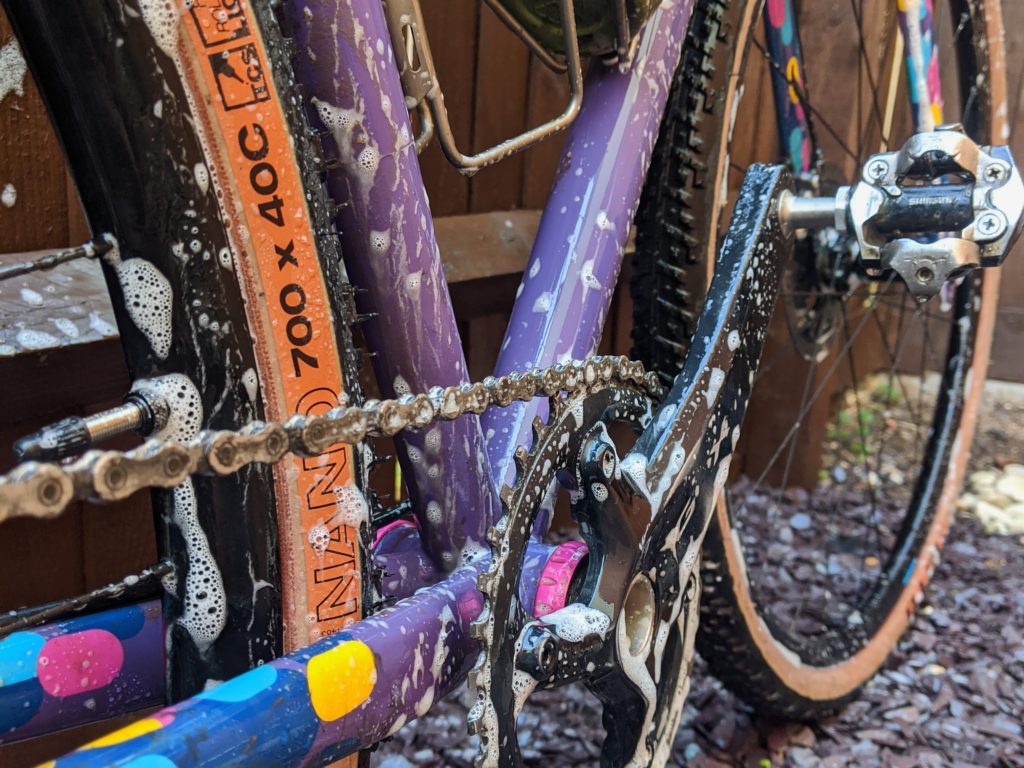 Cliché but true; look after your bike and it’ll take care of you.

The 5am alarm blared. I hadn’t set an alarm in months, let alone for this ungodly hour. I messaged two close friends of mine, Tudor in South Wales and Callum in the Midlands. We’ve enjoyed countless suffering moments together bikepacking, but today we’d have to be sharing this through video calls and pictures.

It wasn’t just those two either. Many of my Shimano Gravel Alliance mates were also taking part, Erwin in the Netherlands going for the 200, routemaster Gijs doing the 100 through pretty sandy terrain, Stefan in Germany was going big and Josh in Cambridgeshire was also up for it. Then there were other friends here in Bristol, across the UK, even current racers like Taylor Wiles and her wife Olivia in the US, Wout van Aert in (much flatter) Belgium and Niki Terpstra riding with Laurens. Just like at the start line of Dirty Kanza, riders from enthusiast to pro were all getting involved. 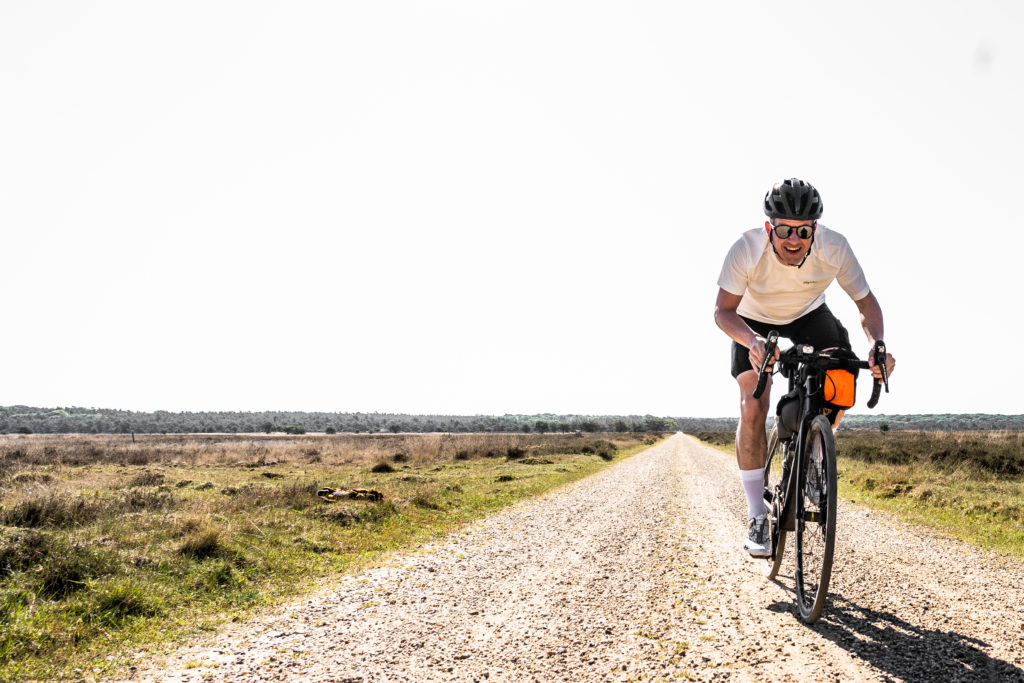 Erwin was busy riding his first 200 miler in the Netherlands. Photo: Gijs Ferkranus

After a necessary dose of bike faff and sandwich prep, we set off at 6.30am across the centre of Bristol, blissfully quiet and almost traffic free. I really love starting early (despite the alarm clock), and getting a good chunk under your belt before most people are even having breakfast. With temperatures set to soar to 27 degrees, I was also mindful that the more we got through earlier on in the cool, the less we’d suffer in the heat.

Out through the gravel road of Ashton Court Estate and down the rocky fire roads of Belmont Hill, we traced quiet lanes and cycle paths to reach Yatton, the start of the Strawberry Line. This traffic-free cycle path was once home to the Cheddar Valley Line, a railway that became better known as the Strawberry Line due to the volumes of berries it transported to London markets from these parts. The light gravel surface is fast, straight and pretty flat, and thankfully at this early time of the morning pretty deserted too. 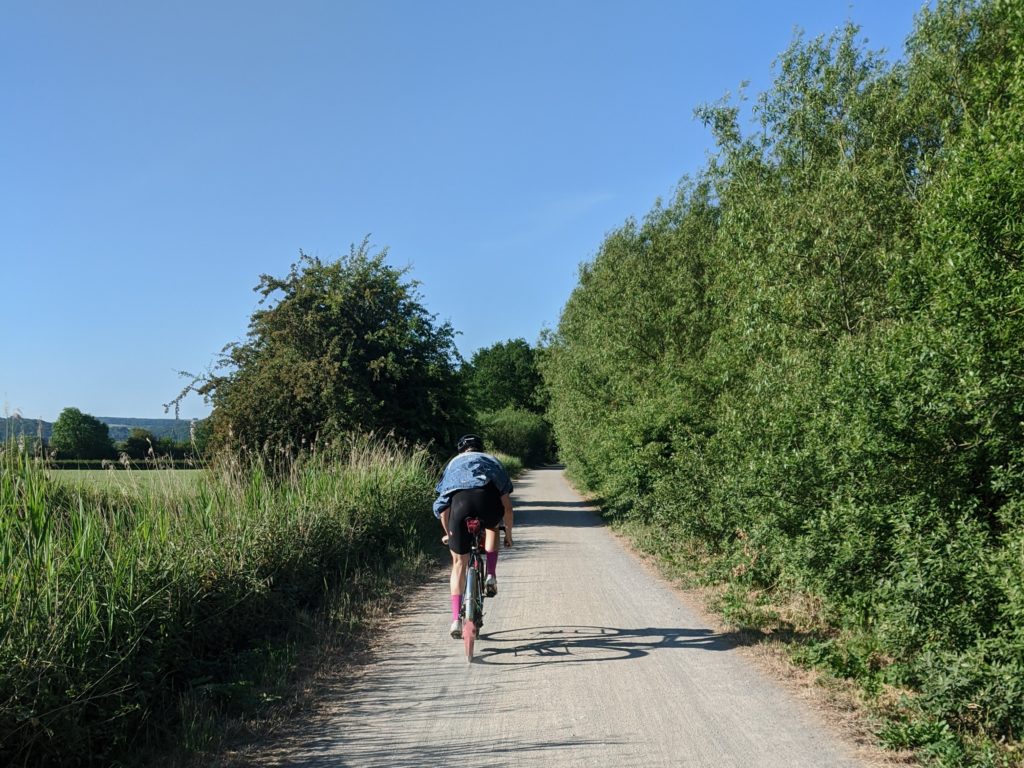 The Strawberry Line is a beginner gravel rider’s delight, and gateway to the Mendips.

Haulin’ on the Strawberry Line

After Winscombe and stopping to chat to some lovely cows, we turned back to retrace our steps through the Thatchers cider orchards and back into Bristol. The sun was rising in the sky and strengthening by the minute, so the bottle refill was becoming more critical.

Despite feeling very prepared, there are some things you simply cannot anticipate. The burst water main that cut water to half the homes in East Bristol that day was one of them. Thankfully between a full bottle in the garage, a dribble from the tap and some fizzy water in the fridge we cobbled together enough to refill our bottles. A slap more sunblock, quick loo stop and even some chamois cream (like I mentioned before, I’m not used to these distances recently) and we were on our way for leg two.

Avoiding the busy Bristol to Bath railway line path, we now headed north-east out of the city toward the Fosse Way, with a few hilly bridleway and byway sectors to navigate en route. Being bridleways on the edge of the Cotswolds, they’re incredibly bumpy, either from being poached by cows or frequented by horses through our very wet start the the year. Real bone-shakers. 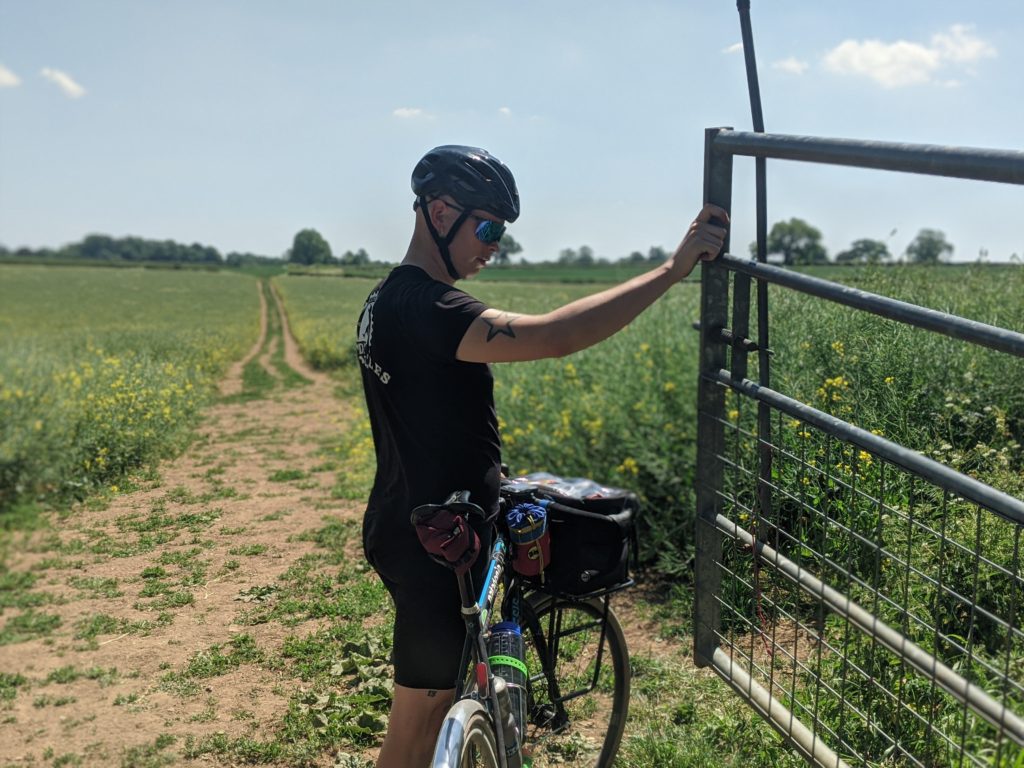 One of the bumpiest bridleways going.

The rattliest bridleways of the county

The Fosse Way was certainly less flat than I’d remembered. The road stretches out for miles, dead straight, mostly a gravelly byway with one or two paved sections. Pothole would be a word too strong to describe it, but even though the road is wide, there are many divots or little craters to navigate around. The further north you head toward Malmesbury, the hillier it gets, with a couple dips down to streams or ford crossings, a wonderful way to cool hotspots on the feet, now at the hottest part of the day.

Another U-turn and we were on the home stretch; 75% complete and what felt like within sniffing distance of the beer and pizza we had waiting for us on our return. Yet besides retracing our pedal strokes along the Fosse Way, we have even more bumpy bridleways and byways to face first. At least this time they were different, mentally stimulating at least even if my legs were pretty cooked.

We rattled along the West Littleton byway farm track and down the Cotswold Way to Dyrham village, home to our favourite hidden tap. In the rose bushes at the side of the village hall it’s like an oasis in an otherwise hostile, hot and socially distant desert. We slumped down in the shade, gorging ourselves on this cool and plentiful water, taking a moment even though we were only 16 kilometres from home.

Bottles filled in case there was no water supply on our return, the last stretch of lanes and rocky bridleway descents took us into town along the cycle path, much quieter now in the mid afternoon heat. 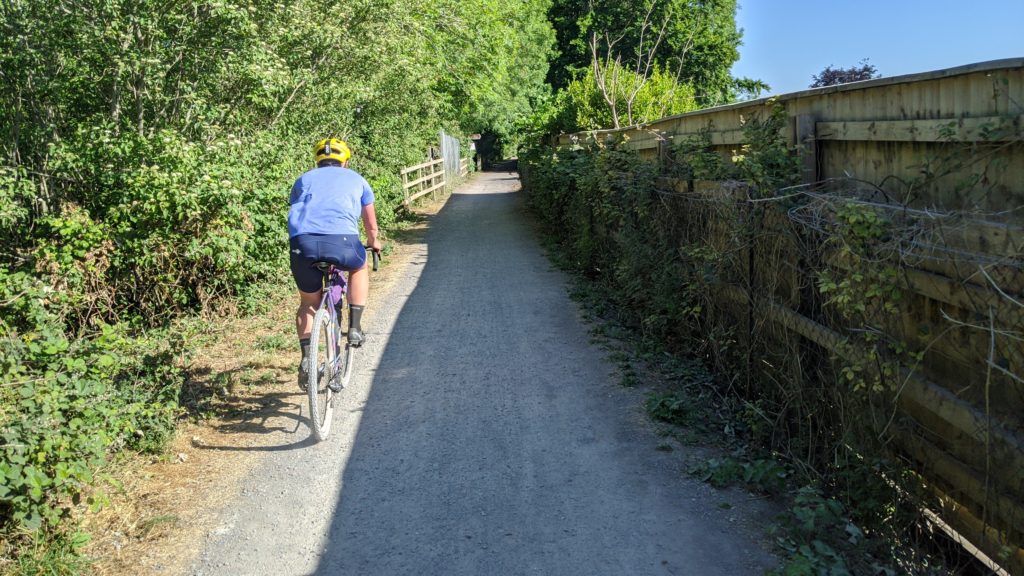 Shorts and t-shirt weather make it a breeze, but plenty of factor 50 too!

I can tell you now, Laurens’ prerequisite of an afterparty was a brilliant shout; we had a top shelf in the fridge full of little cans and no less than three pizzas between the two of us while debriefing with Callum and Tudor about our respective days out. You can forget the dancing though, I gracefully munched through my fair share and rehydrated with a few tinnies mostly while laying on the floor, scrubbed the dusty tan lines from my legs and salty sweat from my face and was in bed asleep by 8.30pm!

It’s clear that our much beloved cycling events as we knew them probably won’t be back for a while. It’s been a good lesson in not taking them for granted, that’s for sure. Thankfully for the time being, we have ideas like Dirty Kanzelled to connect us in the absence of start lines, pre-ride coffees, finishing beers and campgrounds.

Let’s not confine these imaginative international events to virtual platforms. Let’s follow this initiative, the work of Swift Industries’ solstice ‘Swift Campout’, the Backroads.cc gravel ride, and many more. Collective approaches like these help us to be part of a greater community, at a time where physically that’s just not possible. 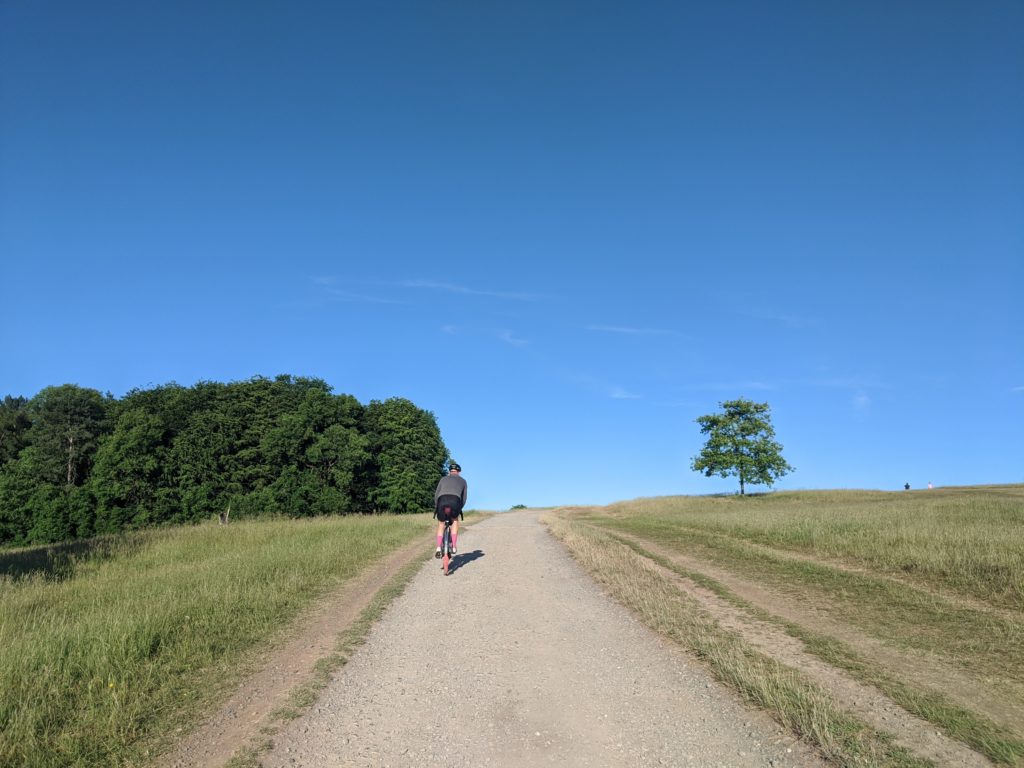 Dirty Kanzelled: Bristol Edition over and out.