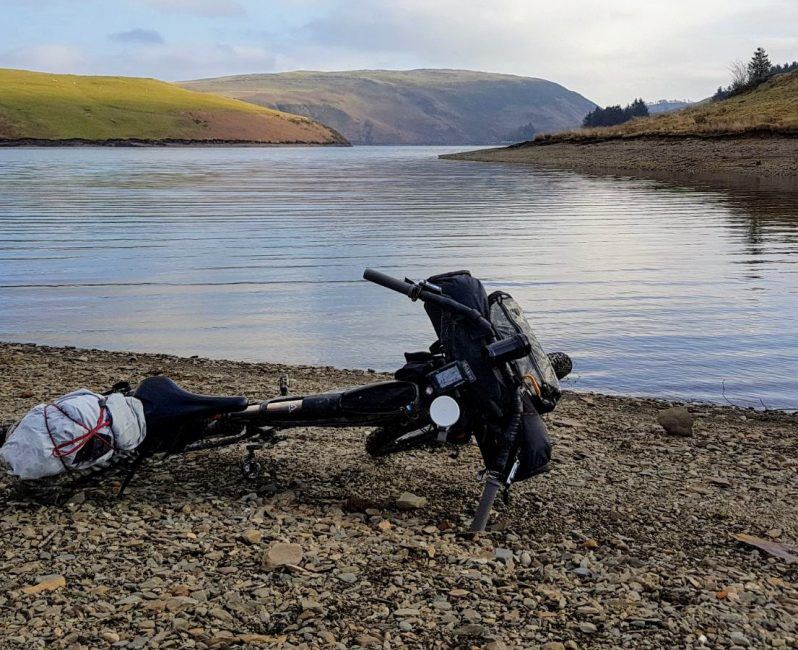 A week ago we told you about our Café Racer plans, and we all know about the best laid plans…

After a sub-standard fry up at Newtown Tesco, we rolled into Llanbrymair. Dee, half of the Bearbones Bikepacking team, unfazed by the grey skies, cheerily pointed us to a parking space and we went in to sign on.

Stu (the other half of the Bearbones team), stopped burning toast for a moment to pour us a cuppa and hand over the legendary winter event gift. As the theme was Café Racer the insulated stainless coffee cup made perfect sense. Cuppa in hand, we made the customary nods to fellow riders along with quick chats about routes and planned distances.

As this was James Pearson’s first bike-packing outing we decided we should hit the trails sooner rather than later so we could get to the eponymous Café and on to a decent bivi spot in good time. It’s good to start with enthusiasm from Llanbrynmair as it’s a 10km road climb to Dylife & Staylittle where the route options open up.

We’d opted to go through Hafren Forest, it’s the quickest way to get off the roads (not that they are that busy in Powys!) and where there are a multitude of trails. We followed the River Severn south and then east until we reached Llanidloes.

The weather was much kinder than expected so we passed right through and up a stiff climb towards Pegwyn Mawr. A quick rest to take in the view and we picked up the Glyndwr Way that would take us into Bwlch-y-Sarnau and the Glyndwr Way Café. 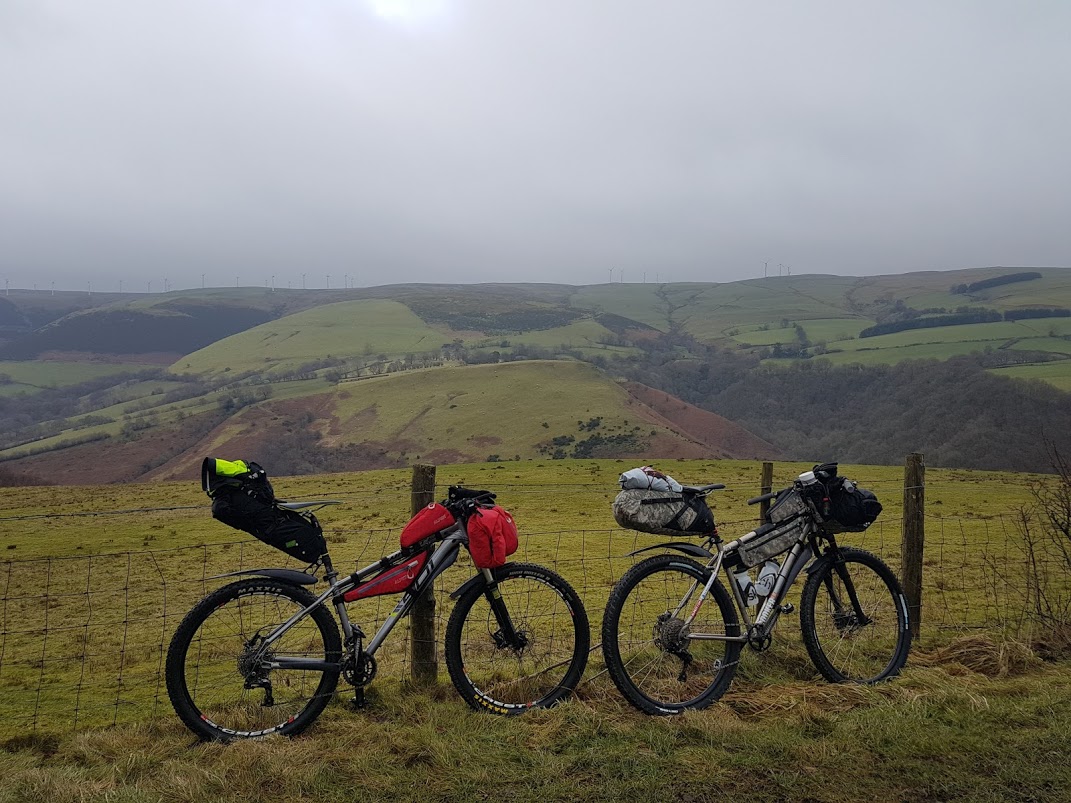 Quick breather after the climb out of Llanidloes

At the Glyndwr Way Café the ever cheery volunteer staff welcomed us like old friends, staying open especially for the event. We had a complimentary cuppa while deciding which of the many cakes to have after a warming bowl of soup.

If you find yourself riding the Trans-Cambrian, or another route in the area it’s definitely worth making a detour to Bwlch-y-Sarnau. Naturally when it’s cold and wet outside it’s tempting to stay in the warm and chat but we decided to push on as the light rain might have been about to get worse! 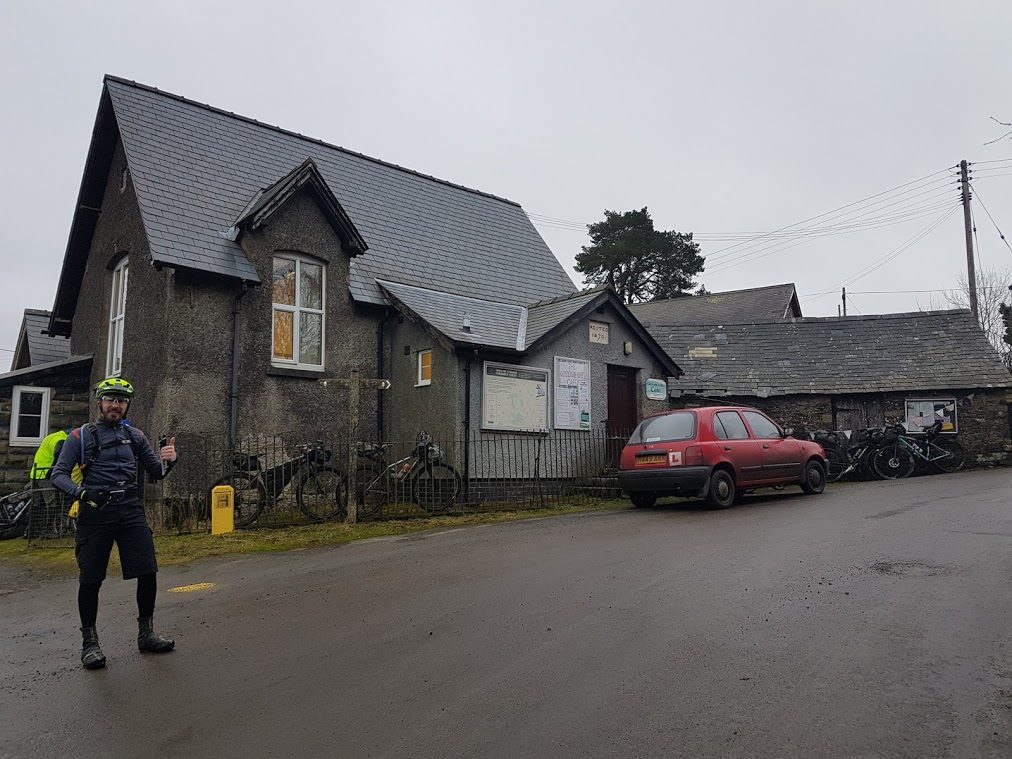 The fast descent from the Café into Pant-y-Dwr rapidly cooled us down but we soon got the opportunity to warm back up with a tough climb up to Bryn Titli. The cracking of icy puddles acted as a reminder of how cold it had remained all day.

As we approached the plateau the gravel double track soon gives way to the Mid-Wales classic, the Phantom Bridleway! 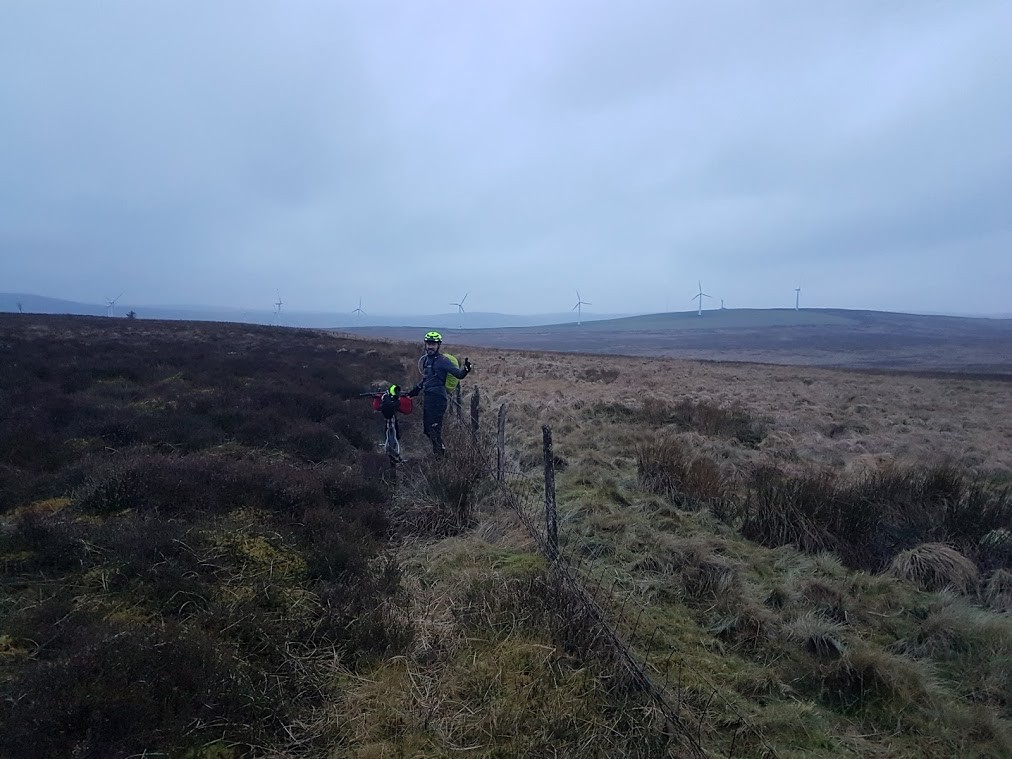 Yes, there’s something marked on the map, there may even be signposts, but there’s no evidence of anyone having passed through on hoof, wheel or foot! Naturally as progress slowed we were treated to more rain.

The last couple of KM to our bivi spot was a mixture of pushing, barely riding a couple of pedal strokes, carrying over fences, and carefully placing your feet so as not to sink into the bog.

We aimed for a small clump of trees and in the dying light could see the outlines of a small hut; it was here that we had planned to spend the night. 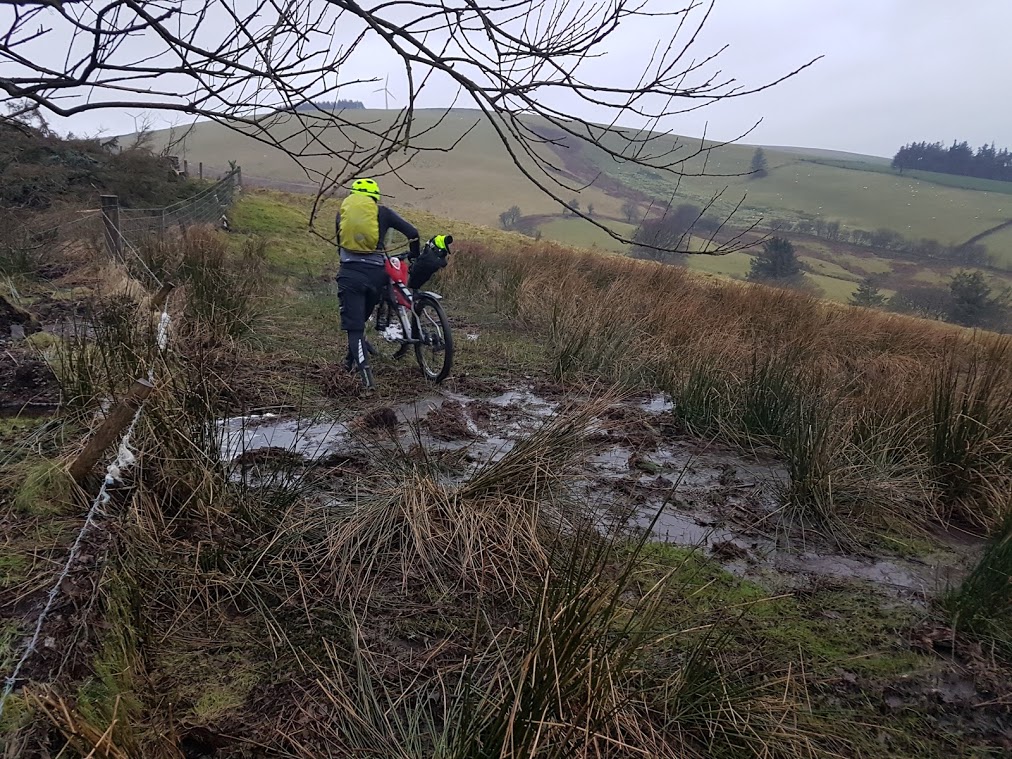 Don’t come to Wales and expect to keep your feet dry!

That’s the first, and most important rule of bike-packing. Wild camping in England & Wales is strictly speaking illegal but is generally tolerated in remote areas. Arriving late, leaving early and leaving no trace goes a long way to keeping landowners happy.

At our chosen bivi-spot there is a small wooden building with room for three or four occupants and their bikes. It doesn’t appear to see much use and I haven’t a clue who it belongs to, but following the most important rule would mean you wouldn’t know that we had stayed there either.

Room with a view

We laid out our kit, fired up the Alpkit Kraku stove and got on with boiling water for our meals. With our appetites satisfied we got our heads down and set an early alarm.

By bike-packing standards we’d had a great night’s sleep safely sheltered from the elements in our little hut. Added to that, packing away dry rather than rain soaked kit aids a speedy departure. Another bonus was that while day one had been overcast we were treated to a glorious sunrise! 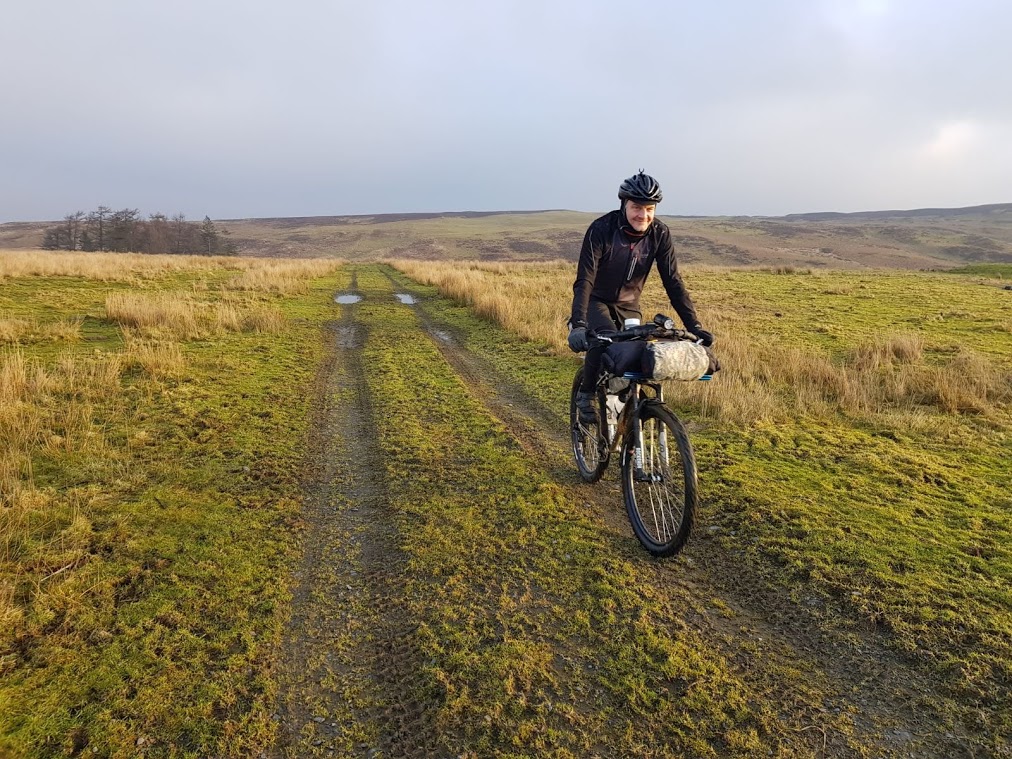 The descent down to the River Wye is steep and with the rain, the surface was like custard. Dragging brakes started to steam as our speed was restrained due to the lack of grip.

We followed the Sustrans route through Llangurig and into Llanidloes where we visited Café number two: The Travellers Rest. As well as being open early on Sunday, is very accommodating to mud spattered and dishevelled bikepackers and serves up a mean fried breakfast. 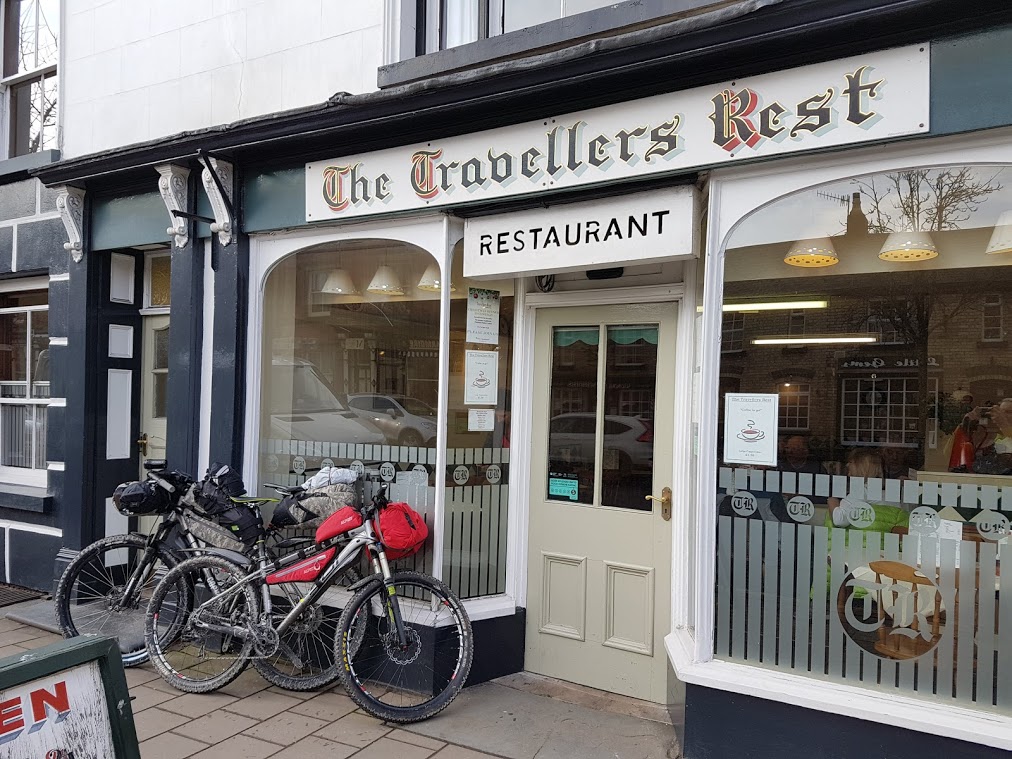 Fuelled now to the finish we took the scenic route back between Llyn Clywedog and Hafren Forest. While beautiful, it features some sharp climbs but the views above the dam make every ‘into the red‘ effort worth it!

Ample reward for the effort to get there

Popping out of Hafren we reached a junction at the head of the reservoir. Mysteriously it indicates that Llanidloes is 9 miles away whichever turn you make! We headed right as it would take us back to Llanbrymair via the way we came, but this time downhill all the way! Those last few miles flew past almost effortlessly as gravity and a second wind pushed us along.

Just as with the day before Stu & Dee were on hand serving up tea & toast while we shared our ride stories. Once safely back we also felt confident enough to comment on how mild the weather had been for January in Wales without fear of jinxing ourselves.

I’m certain James enjoyed his first bike-packing experience, and on the drive home we discussed plans for a Coast to Coast attempt during the Summer. Before then, some local trips and a return to Mid-Wales for the Welsh Ride Thing will provide further opportunities to hone his craft. 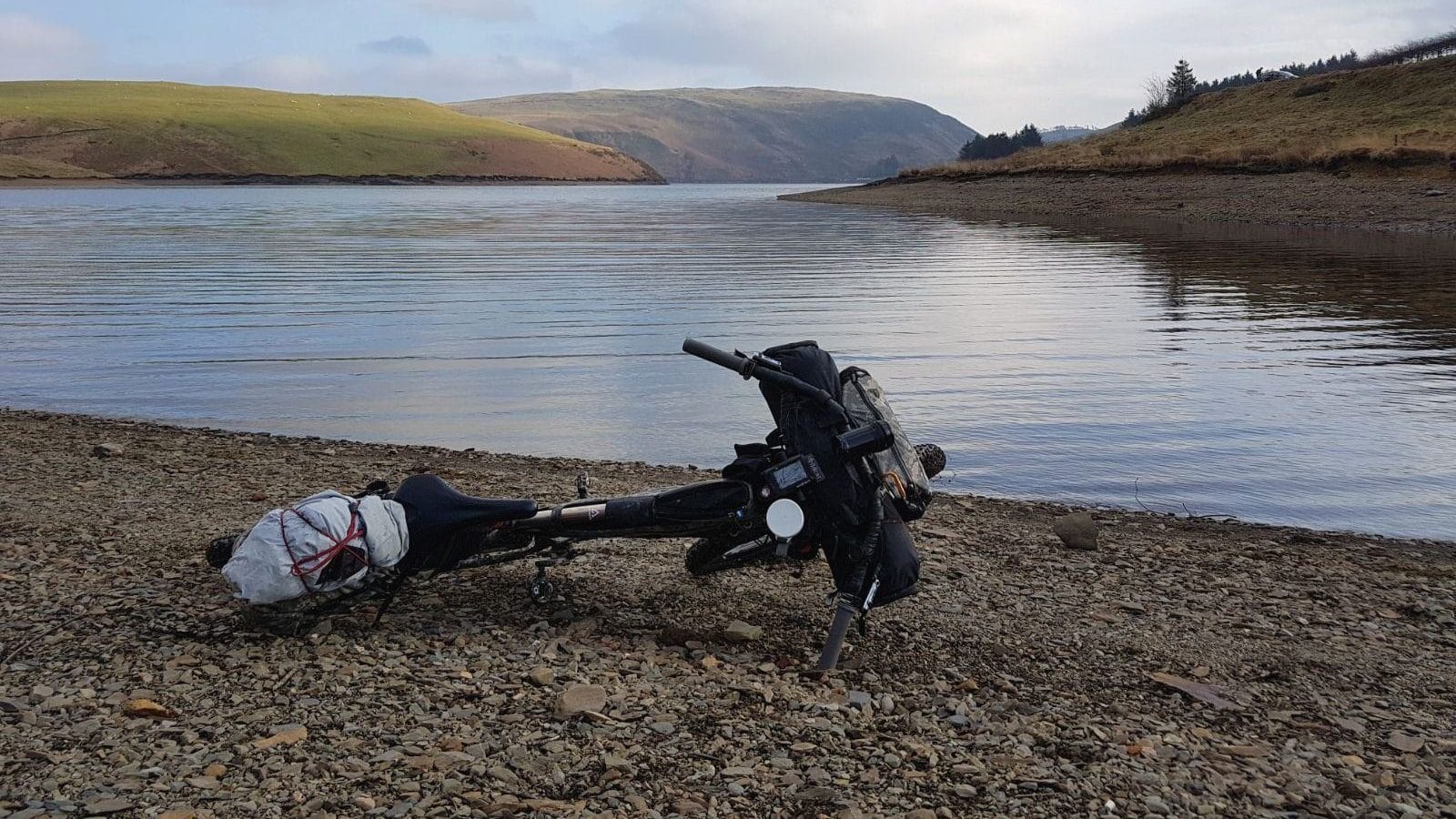 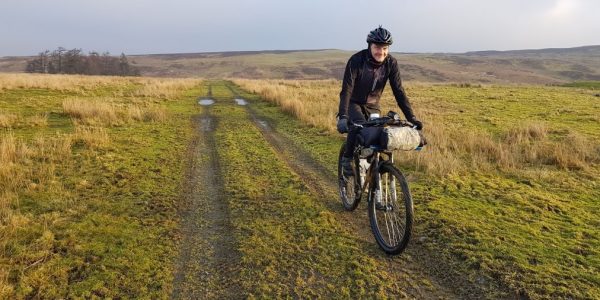 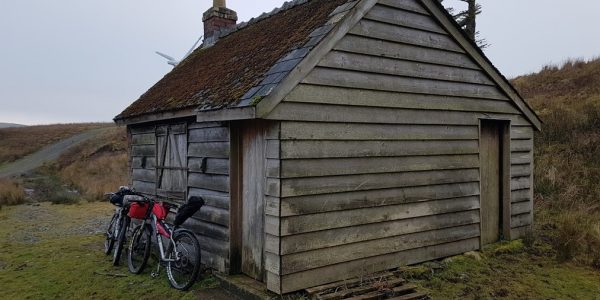 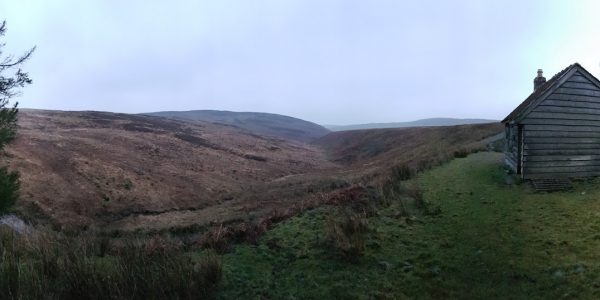 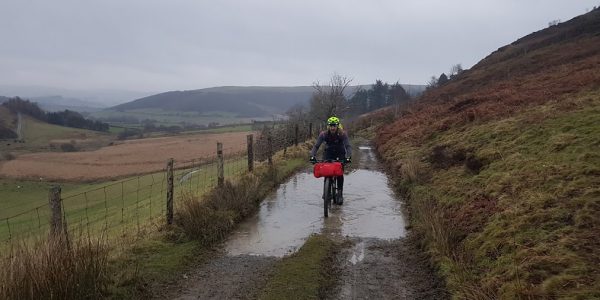 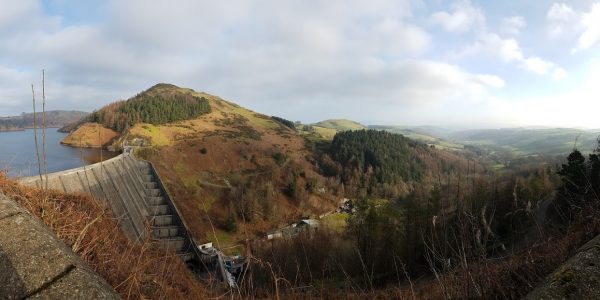 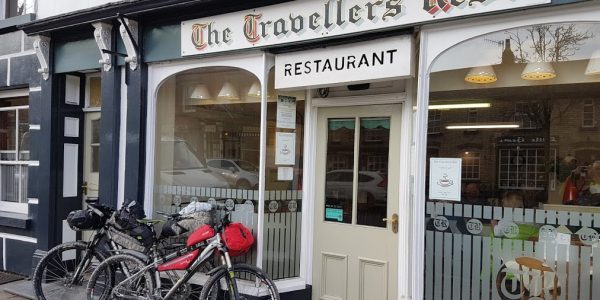 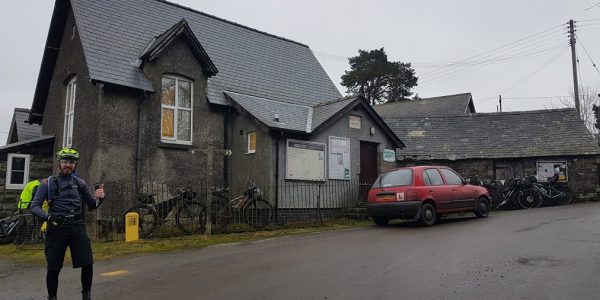 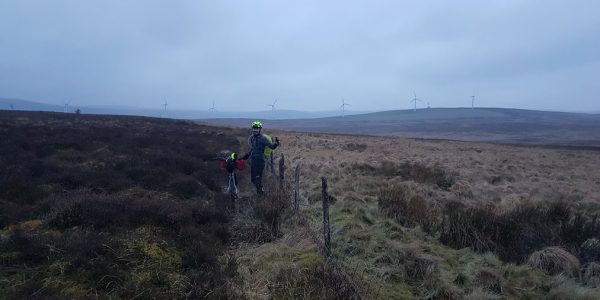 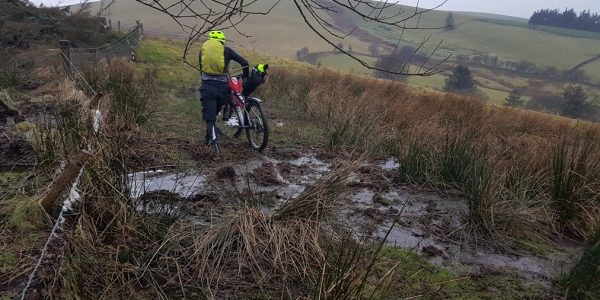